Well, it’s that time of year again, folks. Christmas is coming, and what better time of year than this to neglect your family by playing Football Manager and writing stories about it for strangers on the internet.

Now, I’ll admit that I had started to become a little jaded with FM in recent years: as I outlined in a story last year, I’ve had a version of Football Manager, and LMA Manager before that, and FIFA games before and since at least once every two years stretching back two whole decades, so it’s understandable that things might be getting a little stale. Last year’s story from me was a symptom of this: I managed Leamington from bottom to top in quick succession, and… well, it’s just the way FM goes now for seasoned veterans like me and you, who understand the underlying systems in the game and know how to build not merely a team, not merely a squad, but a whole club, philosophy and all, in no time at all. Especially in England, the cradle of footballing civilization and the natural home of any FM gamer.

I wanted this year to be different. I wanted to constrain myself in certain ways, to set new parameters for my actions, new targets beyond those obvious long-term goals, and to keep moving and experimenting, particularly in my worse area, which is and always will be tactics. So I’ve set a few rules for how I want to play this, and I’ll kind of add to them as the game progresses to keep things nice and tight.

The first rule is that I can’t stay with one club for more than 4 seasons. This is partly the reason I’ve called this story ‘The Mercenary’, as I plan to keep moving from job to job every 2 or 3 seasons and will never stay beyond 4 seasons. I think most FM gamers will have assembled a crack squad of hot prospects within 2 or 3 years, so this rule stops me riding the coattails of natural youth development.

The second rule, related to the first, is that I can’t manage teams from the same nation more than twice in a row. I rarely, if ever manage outside England – I think I’ve spent maybe 10 games outside England in the last five years – so this will force me to experience other footballing cultures and learn more about other league structures and keep things fresh.

In terms of rules when managing, I’ve considered what limits I have in keeping with the idea of a mercenary for tactics and transfers. I know some gamers place a lot of emphasis on a particular philosophy they carry over the years, while others are all about “the meta”, whatever setup this year’s engine favours, and I wanted to get away from that.

I have to play the preferred formation of the existing assistant manager. This will probably be the most difficult rule for me as I generally don’t really understand the tactical systems very well, and I’m also very fickle about changing tactics that don’t seem to be working, so I’ll be relying on staff to let me know what they think, and using the formation as a kind of guide to our mentality and player roles, ie, a narrow formation might prompt the use of wing-backs, 442 might prompt more overlapping, etc. In addition to listening to the assistant manager on that side of things, I cannot replace or improve my staff – I must work within the framework given to me when I arrive at the club, though I can hire new staff if there is space in the budget.

On transfers, buying foreign youngsters is forbidden. Obviously. It’s far too easy to find cheap foreign wonderkids, especially in Europe where Schengen rules apply, so I will have to rely on homegrown talent if I want prospects. Connected to the rules in the paragraph above, I’ll also let the staff at the club guide my transfer philosophy somewhat – so, for example, if the club has a scout with a notable proficiency, say, a particularly excellent youth scout or bargain hunter, then I will tailor my transfer approach to that, by buying more youth players or shopping around the “unwanted” bargain bins, for example.

I need to set a criteria for success when I join each club, but a universal target will be that I must prioritize cup games over league games, by which I mean that I must not rest my best players in cup ties as I normally would, but aim to field the best possible side in every cup game, even if that means risking points in the league. That’s just something I never do, because I always like to win leagues rather than cups – I’d take a Premier League over a Champions League – so I will focus more on the other side this time. Beyond that, I’m gonna look at where each club is in their journey and try to account for it in the goals I set for my time there; obviously, league and cup success is going to be the main one, especially in the early years when most clubs don’t have an in-game journey to carry on from, but I’m also going to look too at things like profit, youth development and stuff like that, and try to work towards those goals too.

If I think of anything else while I’m playing, I’ll just mention it as I go. First update will be out in a couple of days; hope you enjoy it!

Jack
8 months
Some real tricky rules you have set yourself there! Very excited to see how you handle them, though the foreign youngster restriction isn't too bad if you can't also spend more than 4 seasons at a club 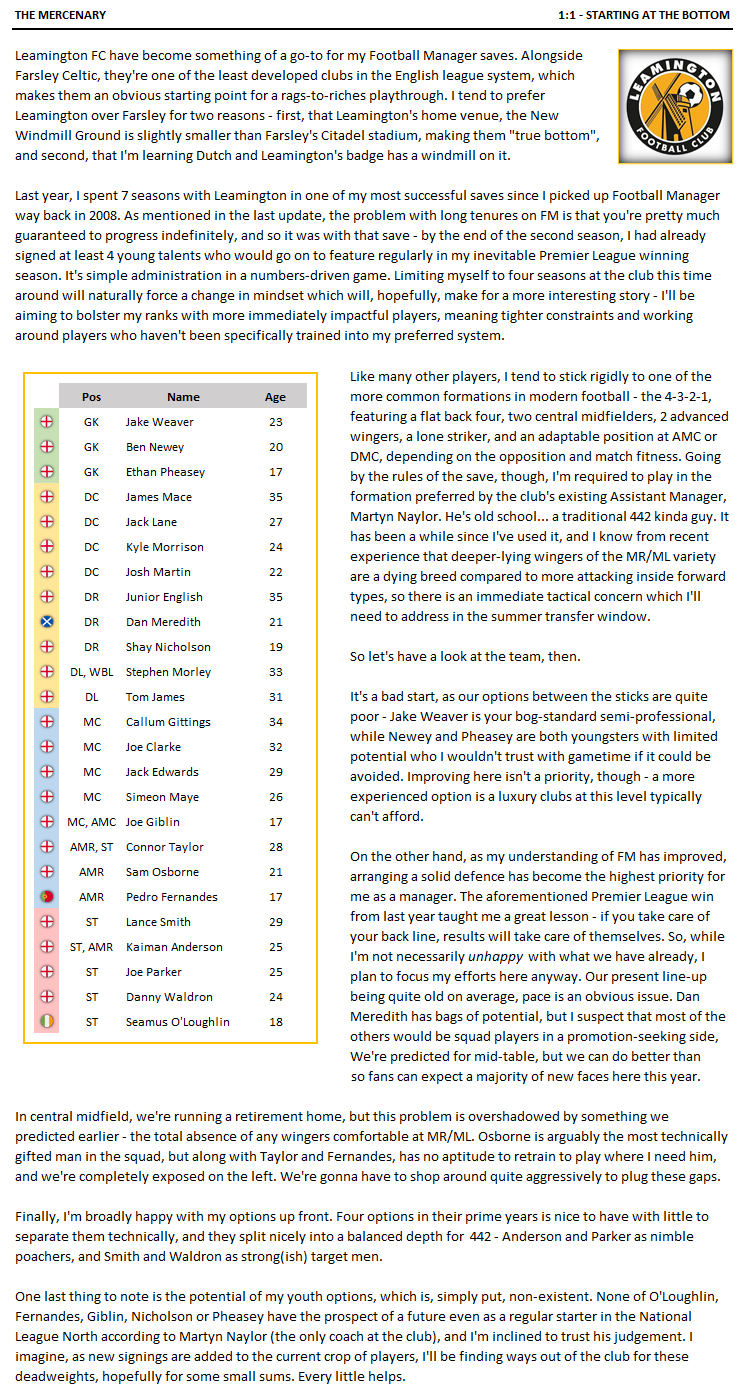 @Jack: I think of the rules sort of like a roleplay for each club I'll go to, rather than specifically a challenge. It constrains my behaviour without putting any unassailable impediments in the way of development and success. But I've tended towards focusing heavily on youth and bringing my philosophy, my formation and playstyle to each club over the last few years on the game, so I'm interested to see how I handle doing things from the templates of whatever identity the clubs I join have.
Login to Quote 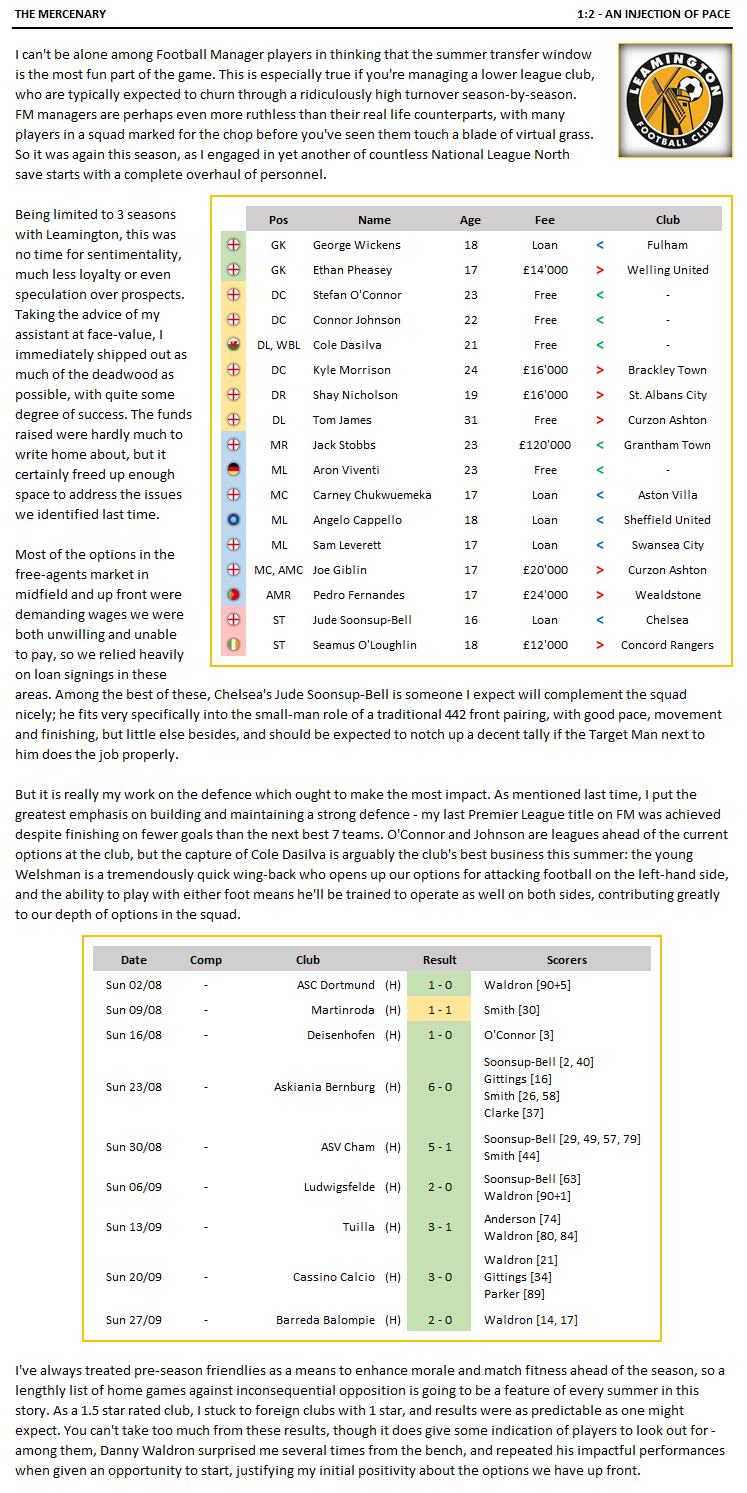 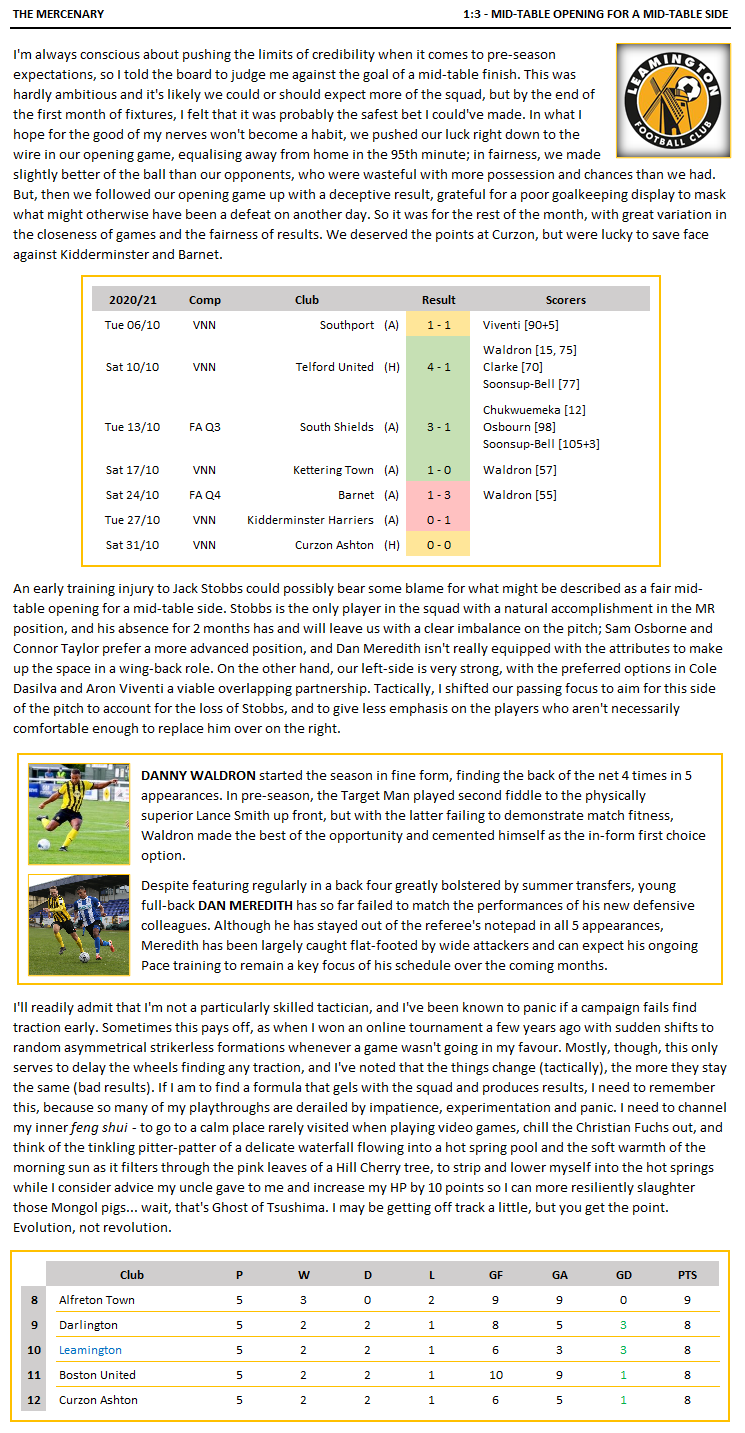 @mgriffin2012: Thanks a lot. Upwards is definitely the plan!
Login to Quote

Jack
8 months
A strong start to preseason followed up by a decent start in the league campaign. I hope the recent results toward the back end of the month don't disrupt morale too much moving forward, though.
Login to Quote

TheLFCFan
8 months
A very interesting set of rules to abide by there and something that I am excited to see. You walked it at every level last year so I look forward to seeing how much this holds you back. Cole Da Silva is a brilliant signing and one that I am sure will help with any success this season. Good luck!
Login to Quote

Tango
8 months
I really appreciate the premise of your save. Travel around the world making more enemies than friends and telling people off every other year... Promising.
Login to Quote

@Jack: The team are happy; big victories tend to have a more positive effect than small disappointments have a negative effect, so it’s just as well that we had strong results in balance against closer results. If it stays that way, squad morale should stabilize in a healthy place.

@TheLFCFan: The rules are partly in response to that save. The reason I “walked it” last year was due to the aggressive scouting of youngsters, so I can’t fully take the credit – youth develops mostly regardless of input, and when you know how you want to play, it’s easy to craft a squad in that image and rotate in those youngsters for quicker development. I don’t wanna do that this year, so I’ve cut off foreign youngsters as a minimum, and I probably won’t spend money on domestic youth if I can avoid it. I imagine I’ll start to feel that and start to struggle a lot more as I move clubs and climb the divisional structures.

@Tango: I prefer to think of it as leaving a trail of square pegs in round holes in my wake.
Login to Quote

Tango
8 months
Even if you got lucky in some games, the final result is what matters. And you should celebrate the Manager of the Month award: even if you don't think you deserve it, it's gonna look good in your cv when you hop off this train
Login to Quote

Jack
8 months
A much better showing this month as you build consistency. Great to see you pushing on the playoffs already.
Login to Quote

TheLFCFan
8 months
I echo Jack, much better month and to be in and around the playoffs is great. Another month of pushing on and getting that tactical familiarity up and you could be pushing even further ahead.
Login to Quote

mgriffin2012
8 months
At this stage of the season, just being in and around the play off picture is what matters, when the time comes to nail down the place, at the latter end of the season I'm sure your side will do what needs to be done
Login to Quote

J_ames
8 months
Jude Soonsup-Bell appears to be quite the striker for this level, and he could be firing you to a promotion push. There's plenty of reasons for the Leamington fans to be excited, especially when you consider the position they're in at the start of the game.

You are reading "The Mercenary".