TOKYO VERDY HIRES MANAGER OTOMO TANAHASHI ON A TWO-YEAR DEAL
Tokyo Verdy has confirmed appointing 35-year-old Otomo Tanahashi as the club's new manager. Tanahashi has expressed his joy to join his first-ever coaching job. The Tokyo Verdy Press Officer has announced Tanahashi's arrival and sparked mayhem on social networks, with many fans questioning the new manager's experience. Tanahashi is largely unknown, especially in Tokyo, having only been an amateur footballer during his playing career. 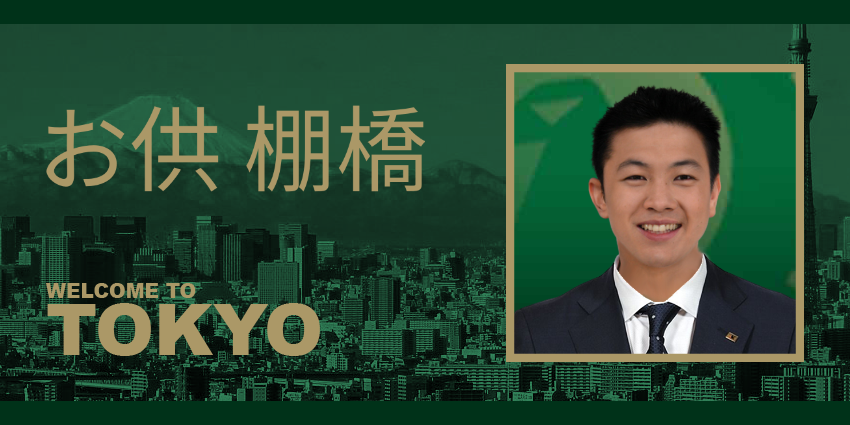 Prior to his arrival to the Yumiuri's setup, Tanahashi was at one point a U18 coach for Japanese giants Kawasaki Frontale, until his departure in 2020, shortly before the COVID-19 crisis. He is known to favor a more European approach to his tactics, similar to Xavi Hernandez at Barcelona, or Bayern's Nagelsmann. Tanahashi has no proven track record as a manager, but the Tokyo Verdy fans are desperate for new blood, someone that would change the system of the club, and lead it towards a better future - Having not won a title since 1994.

I am using this J-League Mod for my save, in case anyone wants a shot at this, too.
Login to Quote

Jack
1 month
Beautiful graphics and a great beginning to what seems like a very interesting story ahead!
1
Login to Quote

J_ames
1 month
Always wanted to play a save in Japan on FM, but unfortunately the databases I've downloaded have always bugged out a bit in the end. Best of luck to you, and to Otomo Tanahashi, in what will be a very interesting story to follow.

As Jack said above, the graphics are beautiful

It's been twenty-one games since the season started for Otomo Tanahashi and his lads.
The newly appointed manager enjoyed a relatively successful first round, having his team as one of the league's top-scoring teams. Let's take a look on how did Tanahashi and his players played so far. 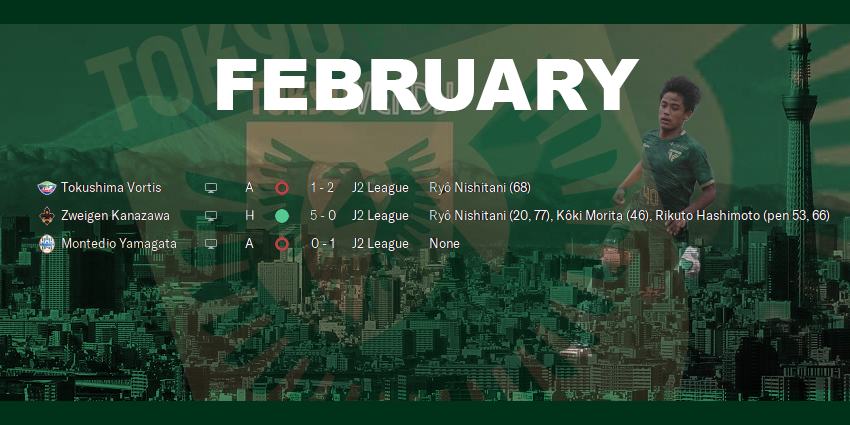 A tough February opened with a loss against newly relegated Tokushima Vortis, and, while losing, Tanahashi managed to find positives in the defeat. The team played well and it certainly transformed to their next game versus Zweigen Kanazawa, where they won 5-0. Young stars Rikuto Hashimoto and Ryo Nishitani scored a brace each. February ended with a minimal loss to Montedio Yamagata, and on we move, to March. 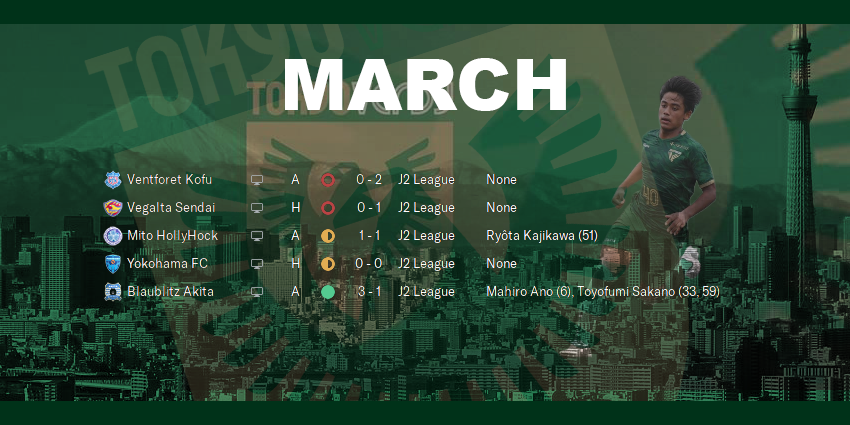 Two more losses versus Kofu and Sendei sent Tanahashi home thinking. The formation was changed to a flat 3-5-2 that would provide more defensive cover than the initially exposing 3-1-4-2 asymmetric formation Tanahashi previously used. The team improved and managed to garner two draws, one against the stronger Yokohama FC. The month ended with a 3-1 win at Blaublitz Akita. 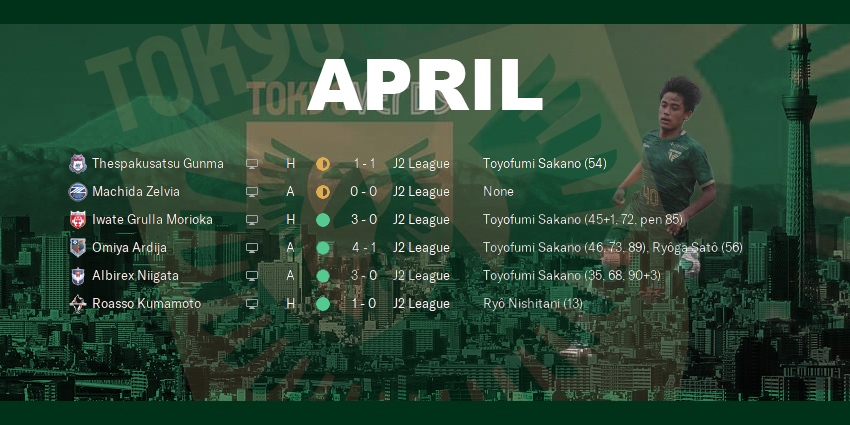 April was a great, great month for Tanahashi. Finally having the signature of a player he tried signing for a long, long while definitely helped. Said player, Carlos Cermeño added real strength to Tanahashi's midfield, and have allowed the team to create much, much more chances. Toyofumi Sakano also flourished throughout April with nothing less than three hat-tricks to his name. What an AMAZING month for Tanahashi and his team! 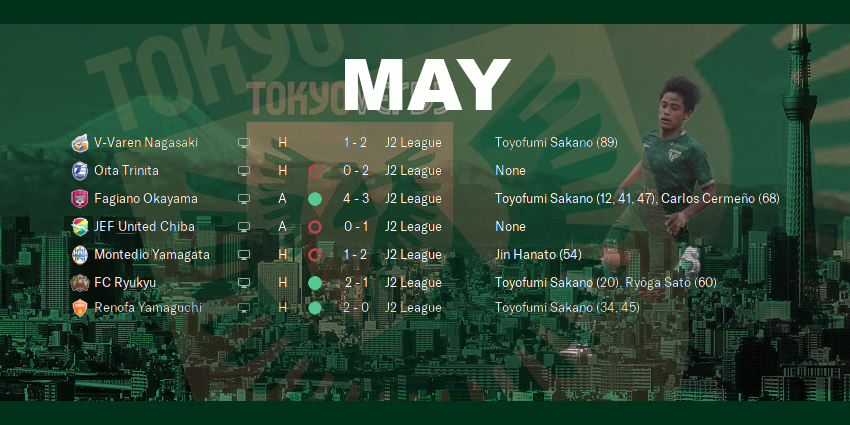 May was a more difficult month for Tanahashi and Tokyo Verdi as they lost three of their six games. Despite that, Bolivian central defender Jordy Candía has also joined Verdy on a free transfer. This will undoubtedly strengthen the defense of Tanahashi's squad and will provide more safety out back.

Jack - I appreciate your comment! Been a great fun working on solid graphics for this

J_ames - With this database and a few file deletions, it was wonderfully easy to start that save. Thanks for your comment!
Login to Quote

Jack
1 month
Sakano really started coming into his own from the end of March and it seems like he pretty much dragged the club back into form with a very healthy league position at the end of May!
Login to Quote

deadzpool
1 month
i have to try a save in asian but in south korea, nice start of season i hope you achieve the promotion soon!
Login to Quote

J_ames
1 month
Some tough losses in there, but your April form was definitely a highlight. There's plenty of positives to be taken out of the season so far, and I'm sure you're hoping Jordy Candía will tighten things up for your side defensively.
Login to Quote

Justice
1 month
Are you fast and furious? Because you’re Tokyo drifting
Login to Quote

AshleyMauzy
4 weeks • Edited
Hello, I have never heard about this before. Thanks for sharing this with us. I have never heard about Rise of a New Emperor game before. It is my first time, I heard about this and I am glad I found your post. I was actually searching for the reviews online at https://write-my-essay.online website because I want to hire essay writer from their website and it is my first time taking help from that website that is why I want to make sure they are trust worthy.
Login to Quote

You are reading "Tokyo Verdy: Rise of a New Emperor?".