Atreidas
8 years • Edited
Hello everyone, i'm doing a story about Woking FC. A club that is currently in the Blue Square Bet South, I'll be giving you all Monthly updates, But will be giving daily transfer updates.-EDIT, I am now doing Weekly updates.
Woking are known as The Cardinals, Their Best League Position they over got to date was 2nd in 1995/1996 Season, they came second with 83 points in the BSP.
Their Worst League Position they have to date was 5th in the Blue Square Bet South.

Pre-Season was good for us, playing many games, we managed to get a few good wins here and there: 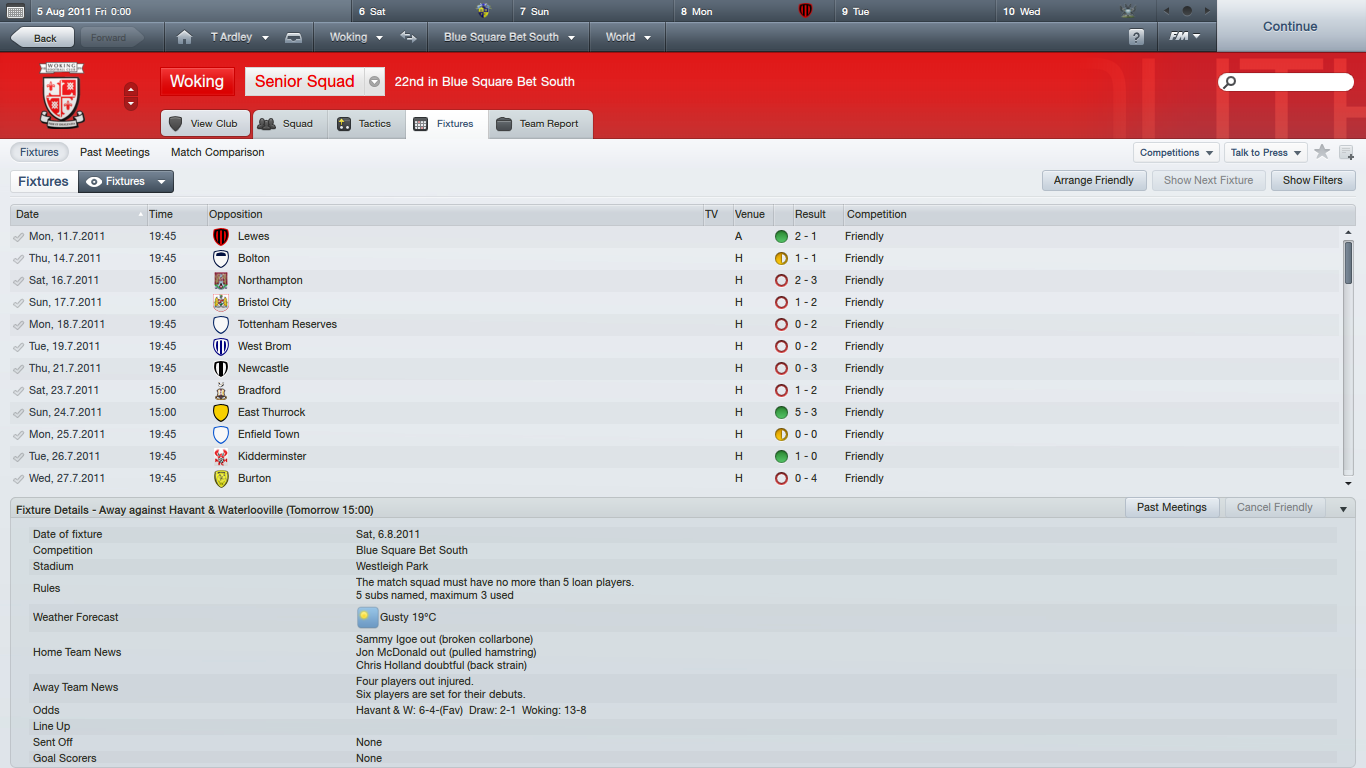 , There was alot of movement in the transfer window. 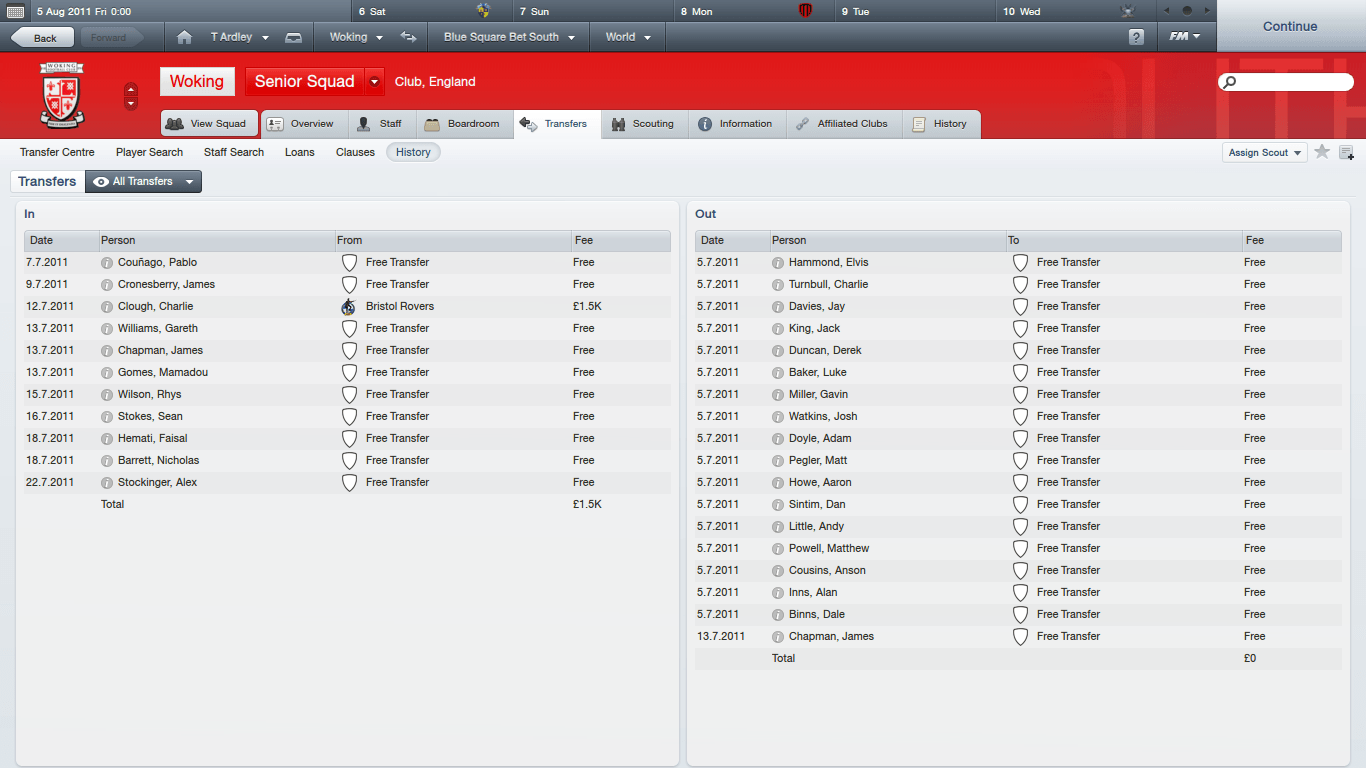 Its the start of the season, and we are ready to go! Our minimum expectation is to win the title.
Wish us luck!

sammyg1998
8 years
Good luck mate, I'll be following this story all the way through to the end! Hope you stick to it, very interesting to see people take clubs from the bottom to the top of English football! (If you can anyway);)
1
Login to Quote

Callum Byrne has joined Woking FC on a free transfer from Hyde.
He is said to become a leading BSP star in the future.
Woking also got Leyton Orient's Moses Odubajo on loan for 5 months.
Login to Quote

FmPlayerJosh
8 years
Looks good so far , Pablo Counago was a great player on one of my saves
1
Login to Quote

Woking Vs Salisbury
Final score: 2-1
Manager comment: Again. Lucky, they were denied by the post once and got denied a blatent penalty.

Dartford Vs Woking
Final score: 3-2
Manager comment: There goes the luck, I was trying to rotate the squad, coming out with a very uneven formation. The loss is understandable, i hope we can pick ourselfs up from this loss.

Woking FC news: Woking have recently signed a number of young defenders. Hopefully their squad will now be a bit more stable.

Woking Vs Maidenhead
Final score:2-0
Manager comment:Very happy with this win, our first clean sheet of the season, we are looking very hard to beat in this league, and since our club is young, we will definately get promotion next year playing like this.

Dover Vs Woking
Final score:1-2
Manager comment: Very Very happy with this win, we defended well, one gunner from Cronesberry, and one from Story sealed it. Going well. Keep it up boys.

Woking Vs Eastbourne Borough
Final score:3-0
Manager comment: Cronesberry is becoming an inreplacable player for me, he scored another wonder goal in this game, after the second goal, i stuck two defenders on, one DM, and a DC, Jack Lampe. Six minutes later, from a corner, he scores an awesome shot! Goal on his debut for a defender. Good job matey, pleased with another Clean sheet, great work from our attackers.

Good month all round, happy with how the team performed, morale is high, but i might want to focus on training the defenders and goalkeeper up personally, we currently sit a happy third in the table after a loss to Dartford. 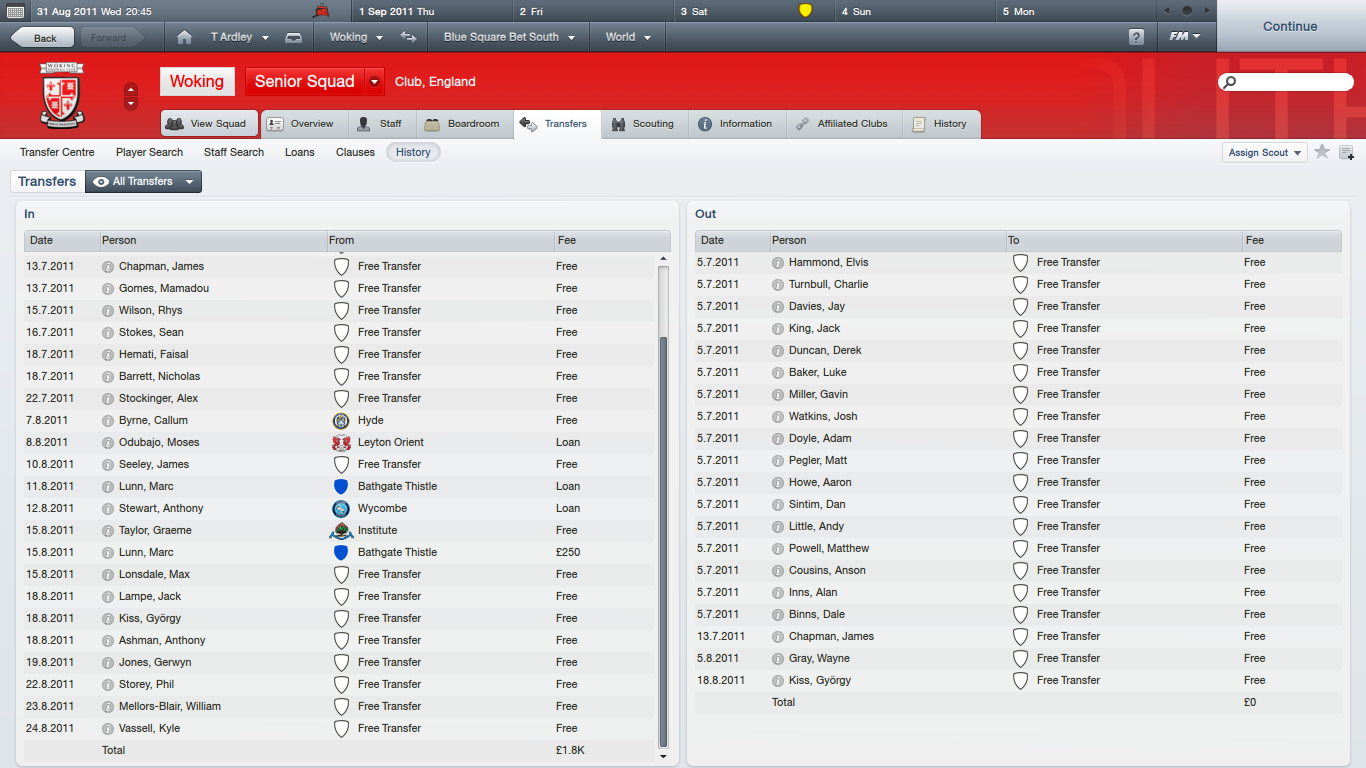 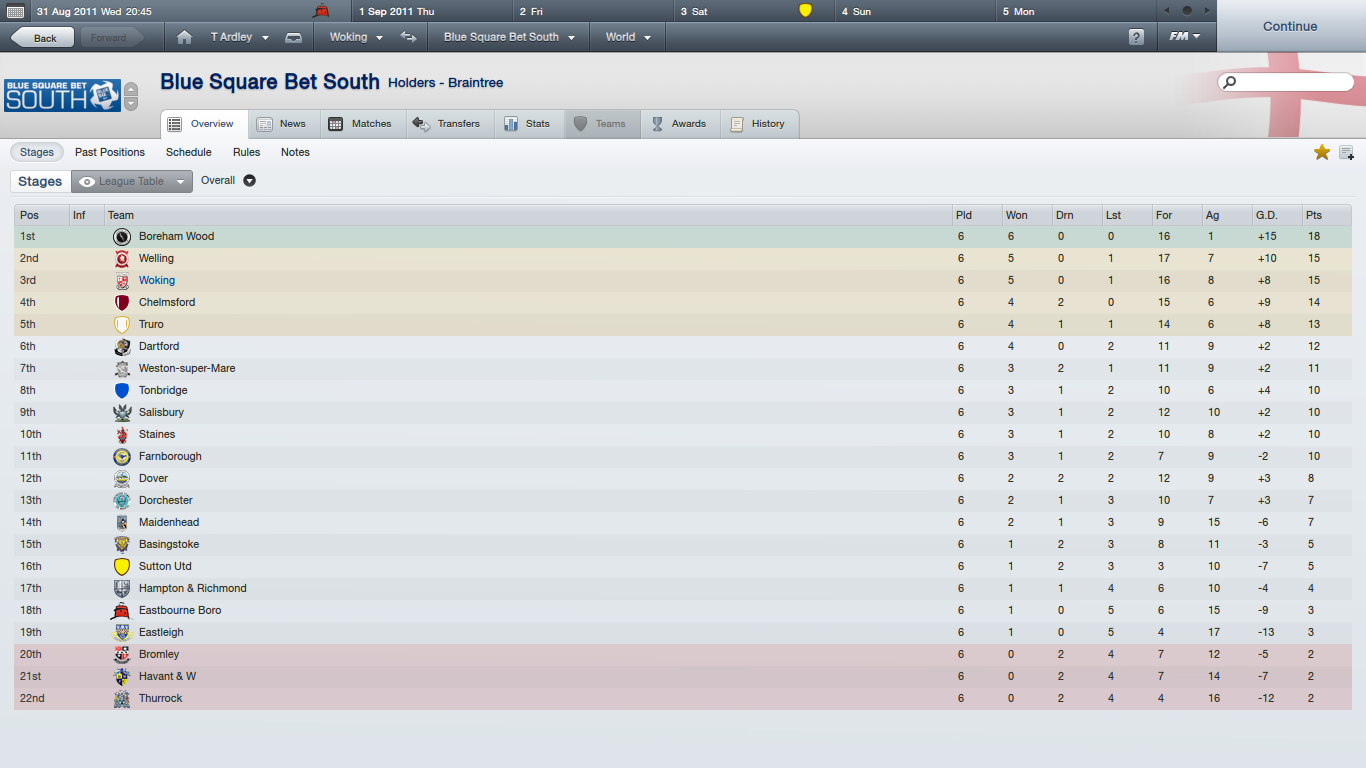 sammyg1998
8 years
Quite a nice start to the season! Keep it up and you will have a decent chance of promotion! I know its early days but, 5 wins out of 6 is quite good!
Login to Quote

Sutton United Vs Woking
Pre Match Talk: I don't expect to win this one, its just to get up match fitness and give our youngsters a go.
Final score:1-5
Manager comment:SUPER SUB! Paris Cowan-hall scored 3 goals in the space of TEN minutes for the team! Driving us to a win! VERY happy with his performance, He's going to be a regular in a few years.

Woking news: Woking have drawn Basingstoke in the FA cup 2nd qualifying round.

Woking Vs Eastleigh
Final score:1-0
Manager comment: I am not happy with Nicholas Barret getting sent off so early on. Thats really dissapointing, although we picked ourselfs up, and Counago got us a result.

Key players: Cronesberry, Counago, Cowan-hall.
Next games comments: I think the next games are going to be a piece of cake, We got Foot of the table Bromley, Just above the relegation zone Hampton&Richmond, and Suprising Tonbridge.
Login to Quote

adamahc
8 years
Well done so far mate, told you it was a good idea to get your save up as a story, show how well your doing

hope it continues.
1
Login to Quote

The Woking manager went on holiday for 2 days after the match.

Hampton and Richmond Borough Vs Woking
Final score: 0-0
Manager comment: (Away on holiday, having an ice cream, waiting to get fined by the Woking FC board, and enjoying himself)

Tonbridge Angels Vs Woking
Final score:1-1
Manager comment: The Woking manager did not come to comment today and went for a holiday for a week, missing the important Basingstoke Cup fixture.
League table: 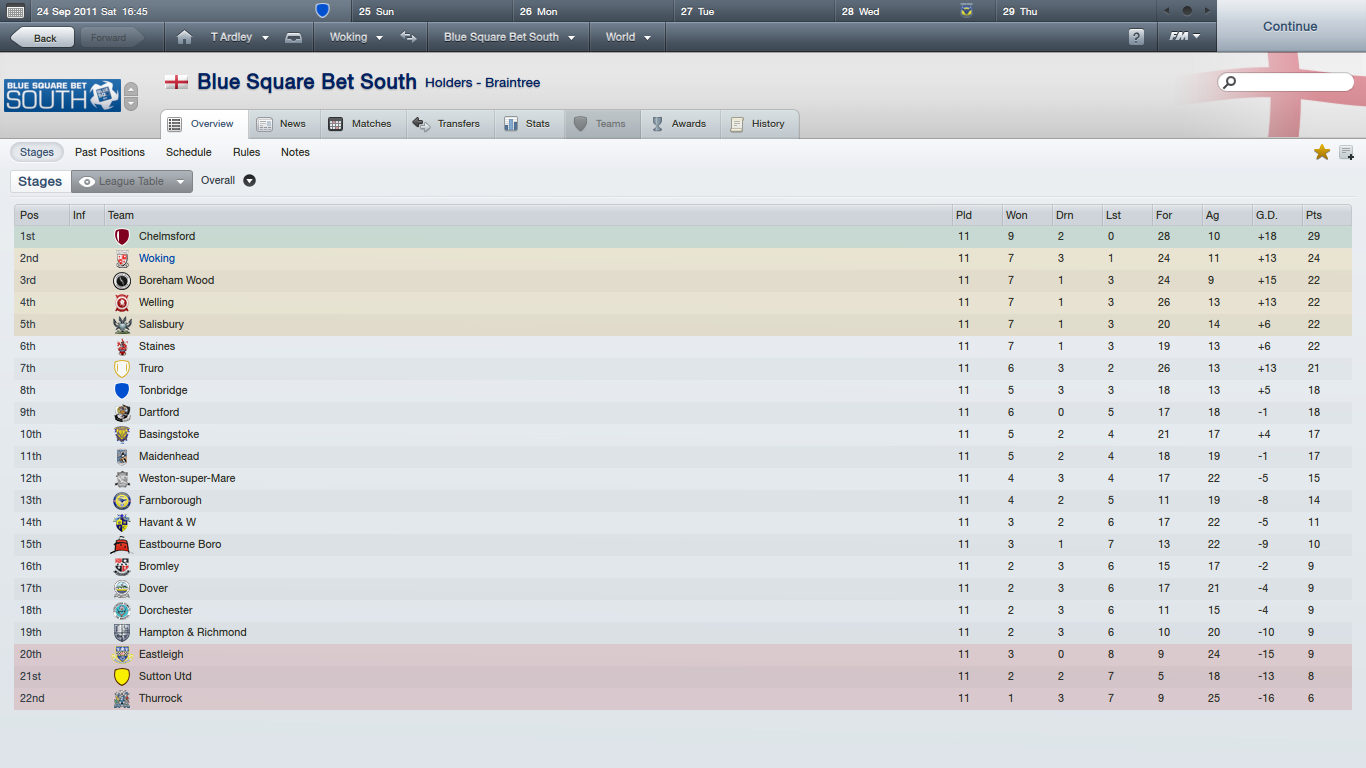 You are reading "A Rising Star - A Woking Story".