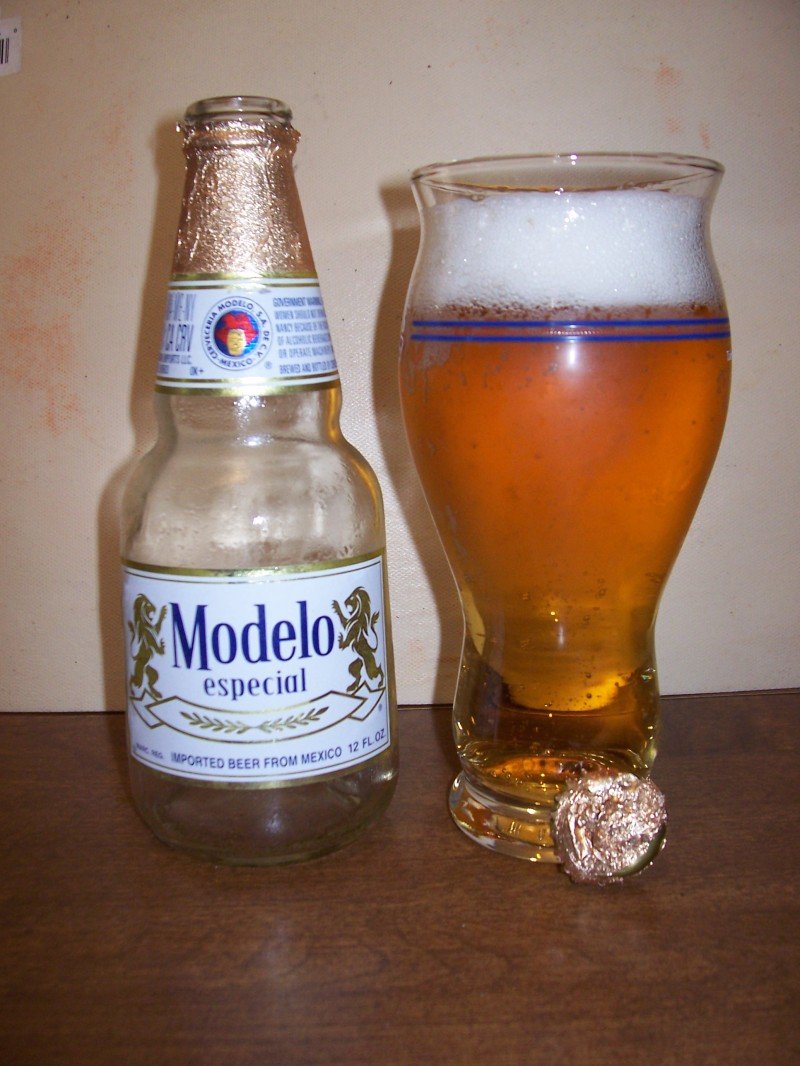 It was the night before game against Atlas - my first as a professional Football Manager. It was late. I was sat in the motel bar enjoying a quiet drink mulling over my team selection and how I was going to tackle Atlas. To be honest, I could have been dealt worse cards. Atlas were a mid table team at best getting by on a shoe string budget rather like ourselves. They had one or two useful looking players but nothing that would exactly strike fear into the opposition, plus we were playing at home. Their Manager, Juan Carlos Chavez, had led Mexico's Under 20 team to third place in the 2011 U20 World Cup. I remember watching the World Cup on TV back in England with particular interest as the competition was held in my native Colombia. One of my ambitions was to coach the Colombian national team....I wonder if that would ever be realized one day..... 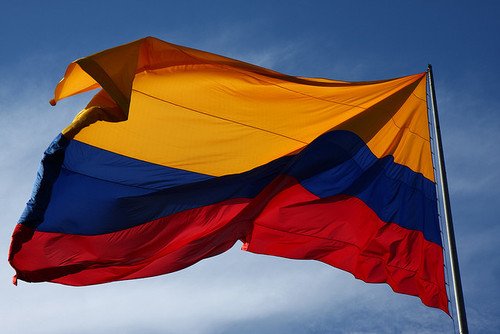 As I was finishing my drink, my mobile rang. It was Tino. Wherever he was, it was noisy. Tino sounded out of breath.

"Hi Tino. Where are you? Sounds like you're having a good time!" I asked inquisitively.

"I'm outside a club in Rio, its banging in there but I'm here strictly on business of course....".

He seemed to be slurring but I couldn't be sure.

"I never doubted that Tino" I replied.

"Yeh, er I have just finished speaking to the agent of the 'next big thing' in Brazil. Trust me boss, I have watched these players train and in competitive matches and they look like the real deal!" he said excitedly.

"Sounds promising, Tino but a next big thing seems to come out of Brazil every week only for them to be a Kleberson or Denilson."

"You have been busy!" I said with a hint of sarcasm.

Tino seemed to be shouting at this point.

"Ok, ok, Tino. I get the message. You are taking into account our budget aren't you?"

"Yeh yeh, these guys are young and the big clubs in Europe dont even know these boys exist yet!"

Tino begins laughing uncontrollably. He sounds either drunk, high or based in his reputation - both!

"OK Tino, send me over the videos and files and I will take a look with Rene. You are OK aren't you?".

"Never been better!" he proclaimed.

There was a kerfuffle at the other end of the phone. I heard lots of swearing in Portuguese and Spanish, then the phone went dead.

I knew Tino didn't come without baggage, he was a flawed genius as a player afterall. I decided to give him the benefit of the doubt and reserve my judgement until I had reviewed the two prospects he had discovered.

I could rain him in when he got back, unless he had uncovered the next Neymar of course...! 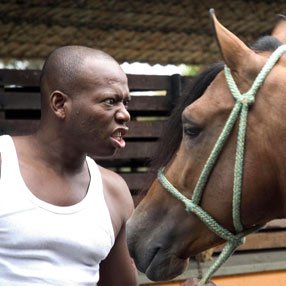 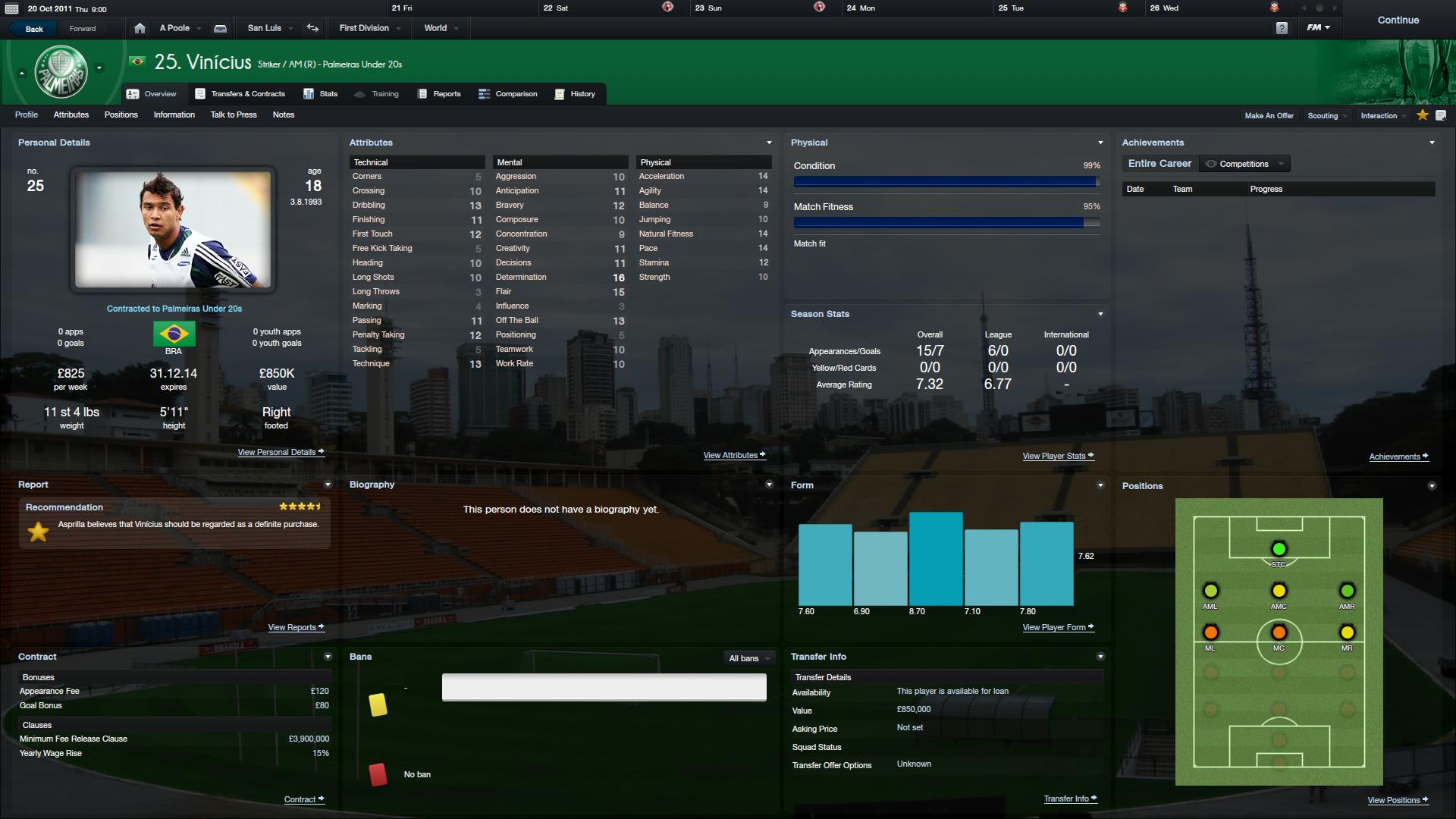 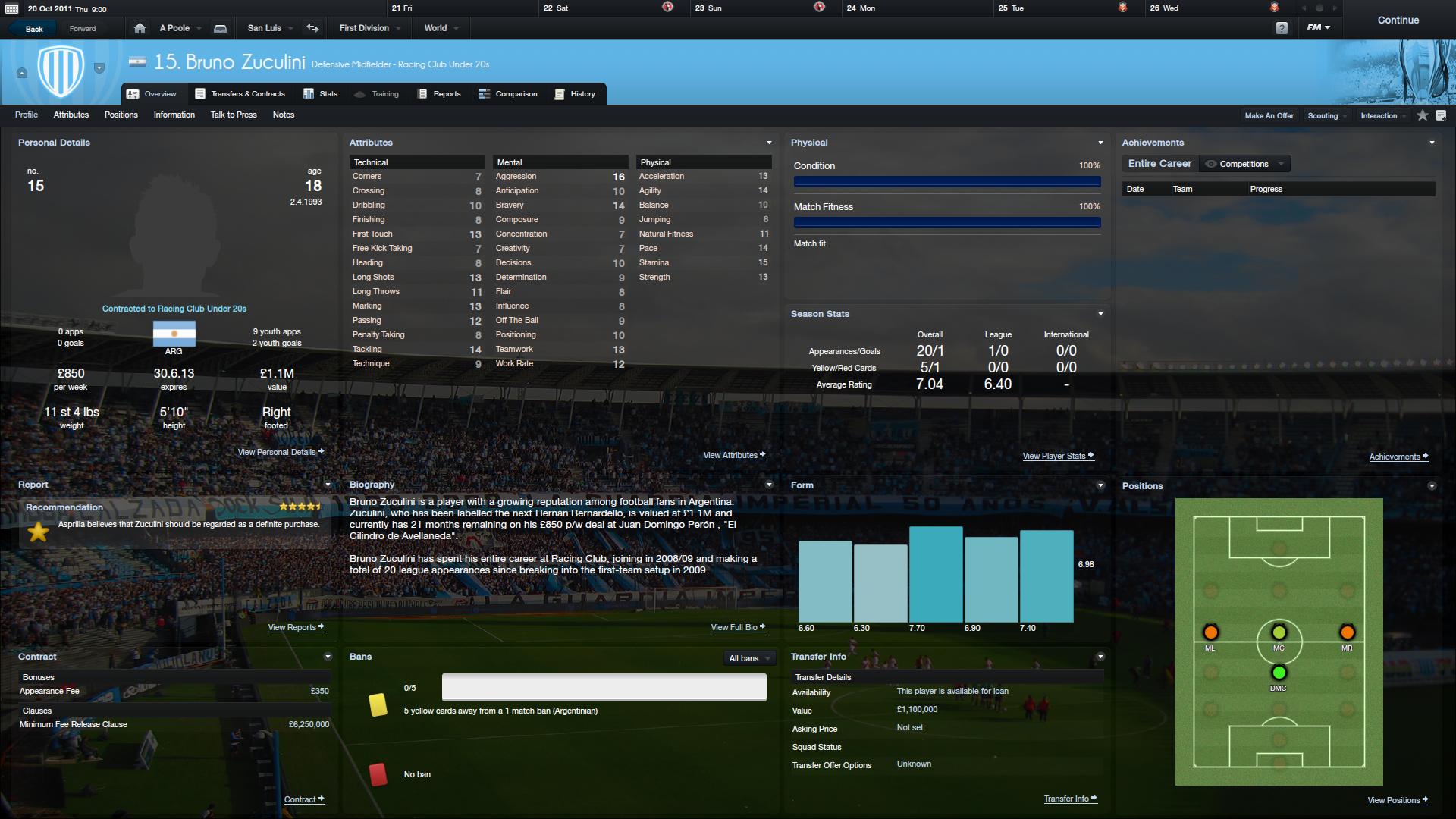 The jury was out as I didnt really know if he had any credentials as a scout. Nevertheless, I would watch the two youngsters development with interest over the coming months. 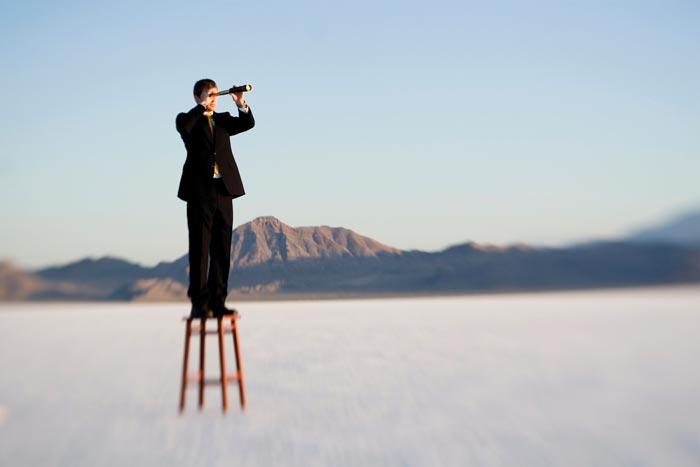 nakulp
10 years
Hey nice story mate...seems to be coming slong nicely for you. Cant wait to see the results of your first few matches

ken3x5
10 years
The jury was out as I didnt really know if he had any credentials as a scout.

will we be seeing an update today?
Login to Quote

I have no idea! Was surprised myself! Its the 12.2 update so whether something has been applied wrong or if they have had a cash injection I'm really not sure....was damn tempting I can tell you!

Intesting. In real life, they have just had their coach sacked, the owner has had his license revoked, and they have had about 5 key players signed by other clubs for the next season. I also have that update so ill have to have a look

1650 Yo
10 years
i just started a new game in fm12 with your inspiration to start unemployed!

i chose to take almiria?, mexico division 2 side debt ridden, so free transfers were my only option, i took them to 3rd place opening stage to go on and win the play offs for opening stage,
then finished top and won the play off in the closing stage of the season,

im now in the first division, still no money sold 3 players brought in 2 and i have 6 straight losses with them and it now looks like i have no chance of turning thigs around

arp303
10 years
If there is interest in this story I will continue it. Have continued with San Luis and there have been some very interesting developments!
Login to Quote

Mikethemanc
10 years
There's lots of interest! I for one have been waiting a week for an update!

The Villan
10 years
Yeah Dude! Lets have an update please.
Login to Quote

UltraMega
10 years
Definitely some interest mate! Loving this one.
Login to Quote