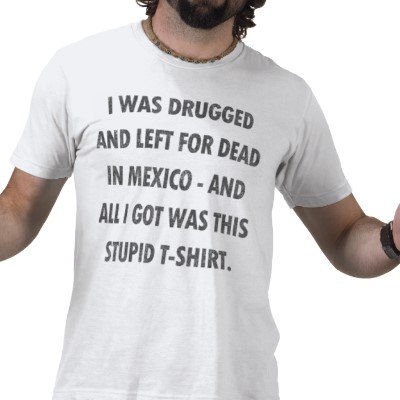 So, inspired by several Managers on this site, I have decided to try my hand at Football Management from the very bottom. I had ambition of a globe trotting career, plying my trade in countries across the world. I was armed with my laptop, an open mind and enough money to cover my air fare to whichever club would put enough faith in me to give me a job.

I was 31 years old and a Colombian national but had lived in England since I was a child (speaking Spanish and English might help...). I had no experience beyond a bit of Sunday League football and a passion for Football Manager. I had aspirations to lock horns with Mourinho, Guardiola, Ferguson et el, but the road was long and first I needed a chance to show my potential.

After a thorough search on the internet, I found there were several jobs available, in England, Australia, Brazil and......Mexico. I decided to apply for them all and see what came back. I was excited but at the same time not expecting anything to come from my applications......

After a day of anxious waiting, to my utter surprise I received some interesting offers! Gold Coast from Australia's Hyundai A-League was very tempting, a £3.3M million budget in an up and coming league, not to mention living it up with the surfer types down under. Starting my career in South America in Brazil was another tempting proposition - although the clubs were in the Brazilian Serie B. Guaratingueta, Vila Nova, Guarani and Salgueiro call offered me a chance. The budgets were meagre but all the teams clearly had some talented players.

And then there was a little Mexican club called San Luis. They were relegation candidates but the team had some quality within it and some young players with real potential. The stadium held 35,000 and the chairman seemed like a very reasonable man....And I could speak the lingo.

I accepted and booked my flight to Mexico. 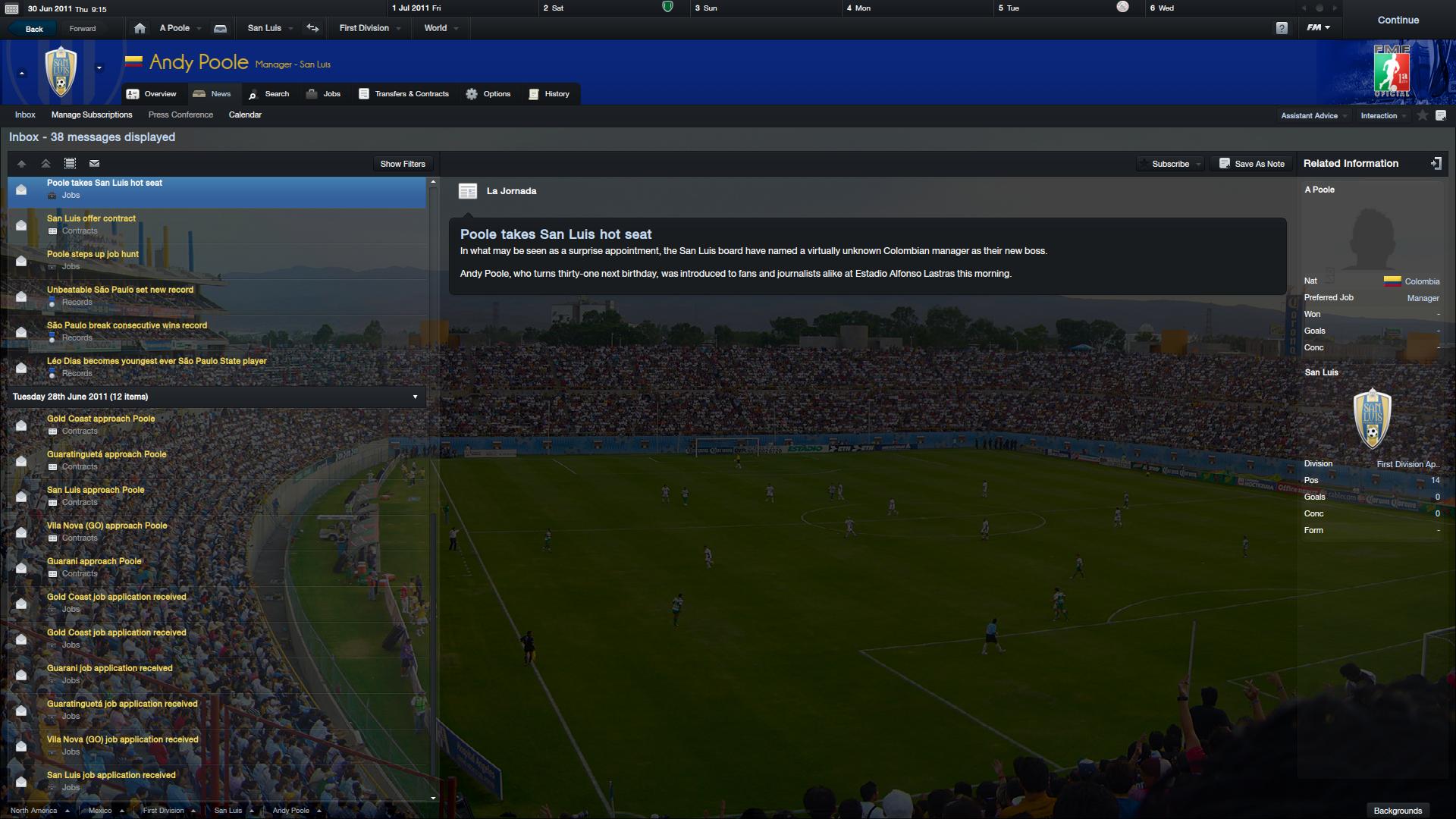 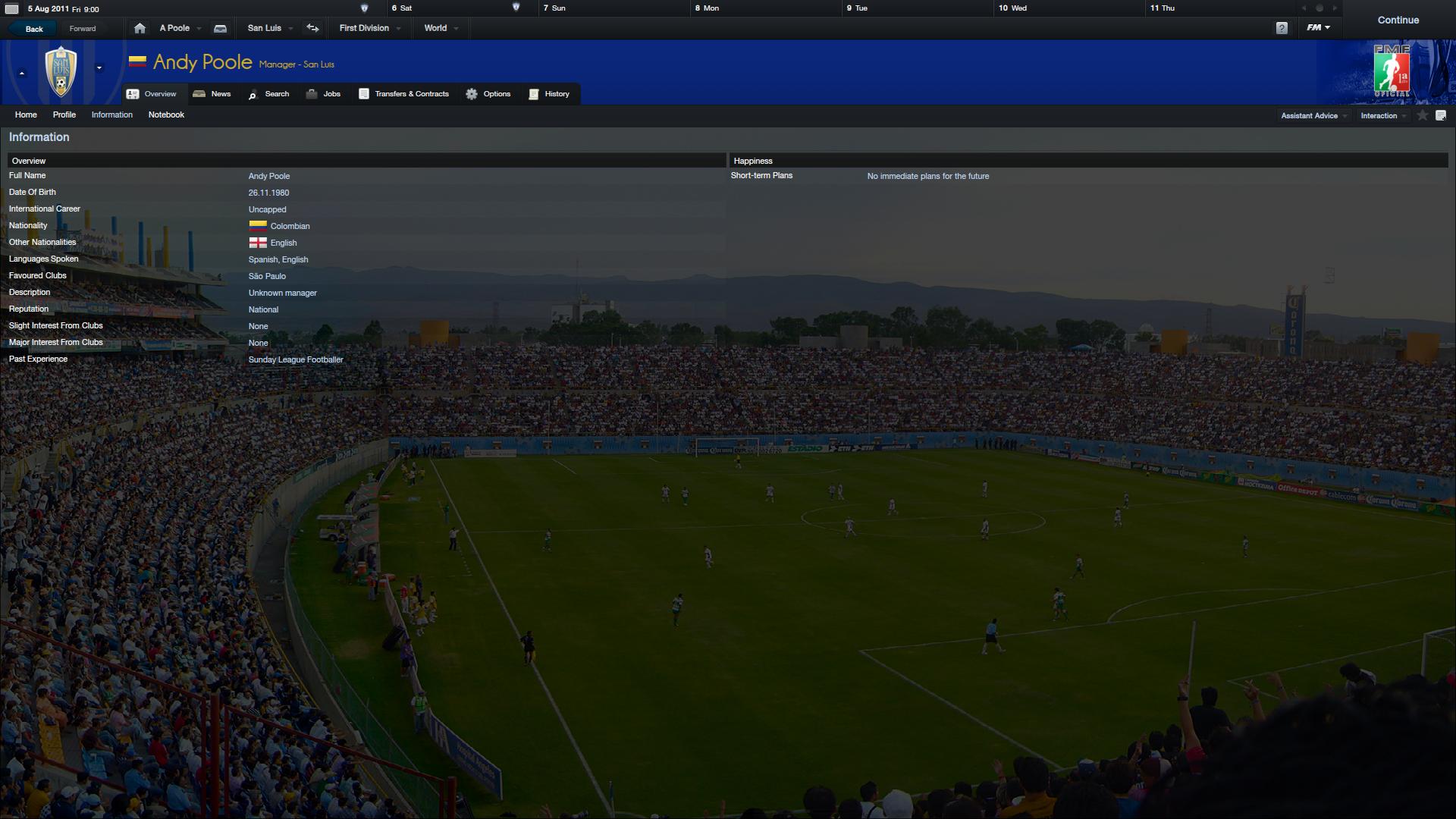 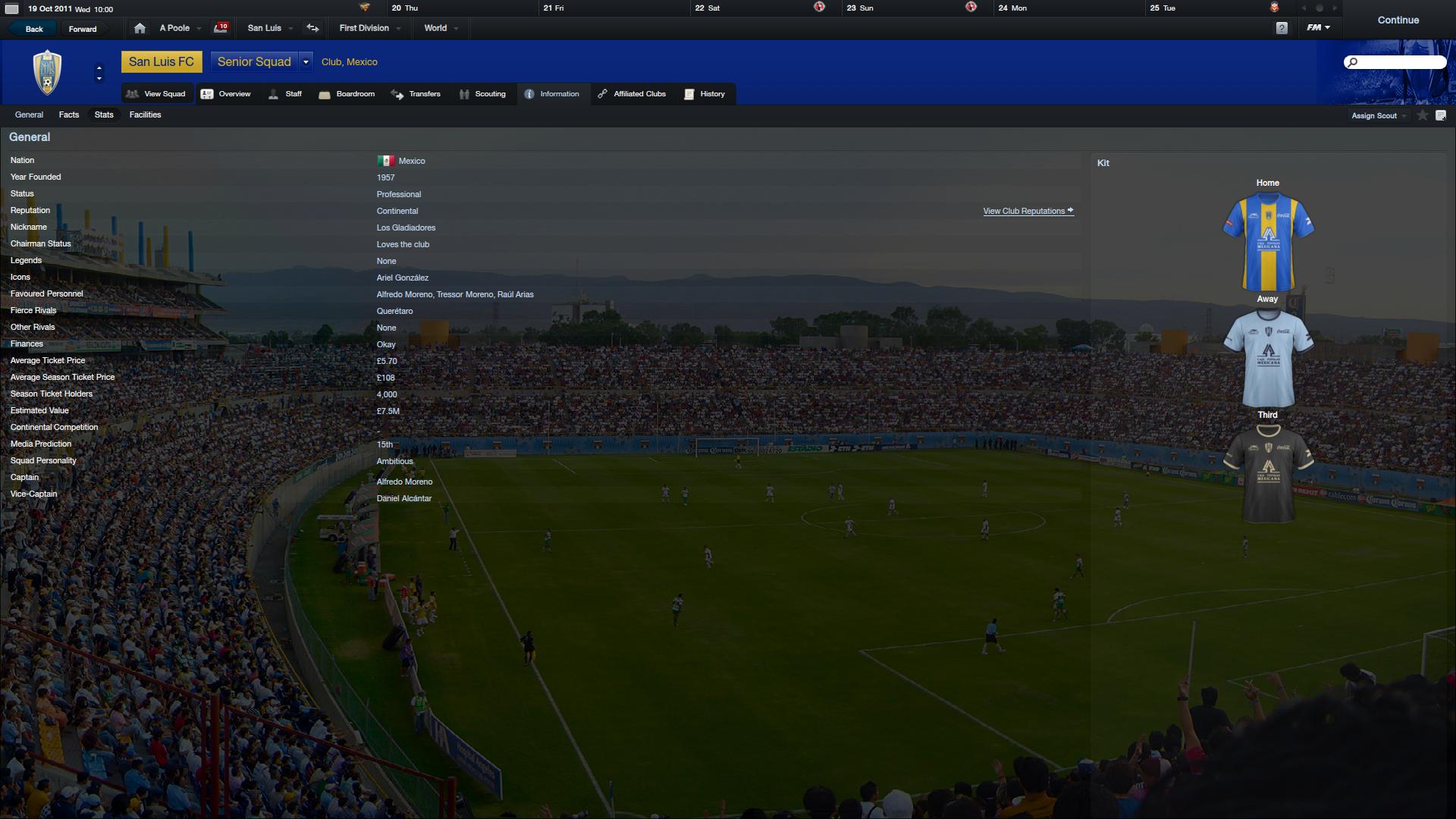 arp303
10 years
The flight was long and went via Mexico City. By the time I touched down in San Luis I was ready for a cold beer and a hot shower. Upon stepping off the plane, I was hit by the heat. It was a dry heat and made me wish I had visited my native Colombia more often. The sound as well, Mexico was noisy! But vibrant. There was an energy to the place. I collected my bags and after going through probably the most lax security at an airport I had ever seen (old guy with a passport stamp) thoughts of the beer and shower had subsided and I was in a cab. 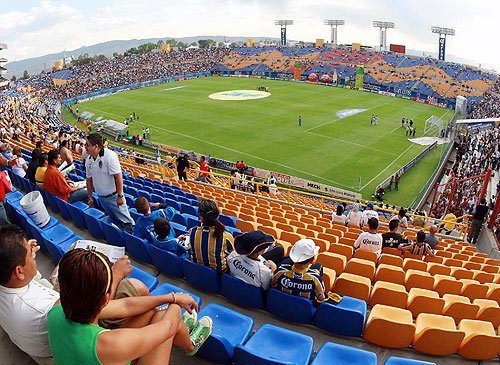 arp303
10 years • Edited
As I arrived at the ground, I felt an enormous sense of excitement and anxiety. This was it, my career as a Football Manager was about to start. I tipped the driver and made my way to what looked like a staff entrance. I wasn't sure what the chairman looked like and even though he was expecting me I was unsure how the meeting was going to happen. As I waited in a very simple reception area, a portly, tanned gentleman wearing a pastel suit greeted me.

"Let me show you to your office".

He led me to a quaint little room that oozed character. You could see that this little club didnt have much but there was something about the place.

The chairman explained that his expectation was for the team to avoid relegation. Anything else was a bonus. I had a budget of £375k. He gave me the go ahead to bring in my own backroom team and relaxed the scouting restrictions to allow worldwide scouting. He confirmed my salary of £2,600 per week. Not bad.

He wished me luck and left.

And that was it. The rest was up to me. It was late so after a quick tour of the ground by the friendly caretaker, I booked myself into a local motel and began to think about meeting the team the following day. 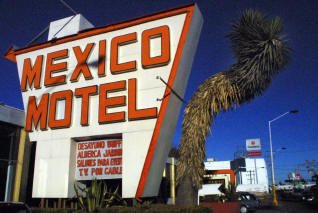 marz3y95
10 years
Im guessin you have given up on the AC Milan story? It will be a shame if you have although this story also looks very promising.
Login to Quote

Shameless
10 years
Fun story going on here. Like watching Eastbound & Down. Are you doing both this and Milan?
Login to Quote

arp303
10 years
Was planning to do both yes, Ive played a bit more of Milan just wasn't sure if there was any interest in the story so not written it up yet....Just couldnt resist a rags to riches career with some of the epics I have been reading on here!
Login to Quote

_Man_u_barmy_army_
10 years
God story so far, I am intrigued by the Mexican League, I was wondering what the pace was like? or style I suppose its hard to grasp the style just from football manager but I assume you have some sort of idea?
Login to Quote

Mvan12
10 years • Edited
Awesome story so far, will be following

arp303
10 years • Edited
Whilst Im not an expert, I believe Mexican football to be quite fast paced, technically good and quite physical. Although many of the offensive players are of quite small stature, there are many big, tough defenders and midfielders who will happily take chunks out of the attacking players (and often get away with it!). Mexican teams fare very well against other North American teams and hold the record for the most wins of the North American Champions League by some margin.

First impressions from a Football Manager point of view are good, its very competitive and there are some great clubs and real hidden gems playing in the league.

Should be an interesting stay in Mexico and I'm hoping that if I impress at San Luis I may get an opportunity at one of the big Mexican teams such as America (MEX), Chivas or Monterrey.....
Login to Quote

I have no idea! Was surprised myself! Its the 12.2 update so whether something has been applied wrong or if they have had a cash injection I'm really not sure....was damn tempting I can tell you!
Login to Quote 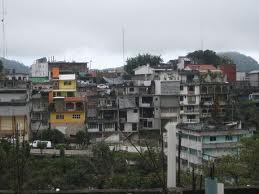 Despite sleeping on quite possibly the thinnest mattress I had ever seen in a stuffy room with paper thin walls, I woke feeling fresh and revitalized! I couldnt wait to meet my players and settle in at my new club! I opened the curtains of my dingy motel room and peered out the window. San Luis wasn't exactly Rome but it was a start and it was to be my home for the next season, if I could last that long anyway.

I couldn't get ready quick enough. I hadn't even unpacked. I grabbed a shower, ripped the tag off a shirt I'd bought at Duty Free, threw my trousers and shoes on and made my way downstairs to the lobby. It was going to be a busy day so I grabbed some breakfast (hope Mexican food is better than this) and made my way back to the stadium for my first day. 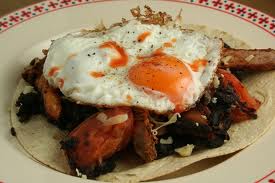 There was a small training pitch out in the open just a short walk from the ground. There were several cars in the car park and the players were already having a kick about. It was a far cry from the Aston Martins or Bentleys that were parked at the grounds of the elite clubs around the world. I hoped to mix it in those circles one day but for now it was time to get to business....

It was finally time to meet the team..... 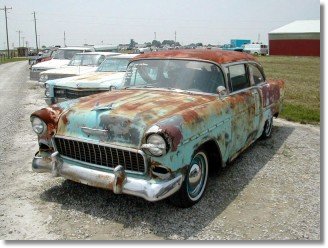 arp303
10 years • Edited
I approached the training pitch confidently. A middle aged man was watching intently from the sideline, barking instructions and gesturing frantically. I caught his eye, he opened his arms and marched towards me with a welcoming smile on his face.

"Ahhh at last! You must be Andy! How was your first night in Mexico?"

"Great" I answered. "Delighted to be here".

"My name is Rene Isidoro Garcia. I am your Assistant Manager" he said.

"Great to meet you, Rene. Lets get to work" I replied. 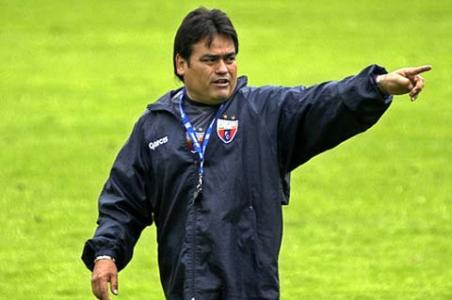 I asked Rene to lead the training session and then call a team meeting so I could formally meet the team. I have to say was quite impressed by his style. He was confident and had a great rapport with the players. Getting him on my side could be vital to me building a relationship and trust with the team.

I was also impressed by some of the players. Moreno, an Argentinian striker, looked sharp and we had a tricky winger, a Mexican by the name of Cesar Villaluz. In fact, Villaluz was actually a new signing from Cruz Azul, one of the big Mexican clubs and had already been capped by the full national team 12 times, scoring twice. He was quite a coup for a club like us.....A pleasant surprise although with the greatest of respect to San Luis I did wonder what had he done to end up here..... 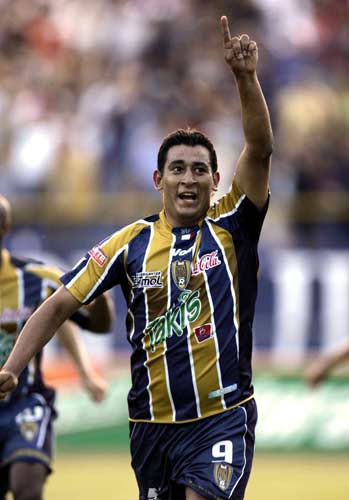 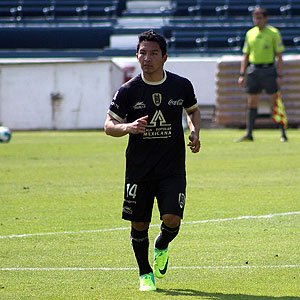 I was less impressed with the coaching staff. It was thin on the ground but the guys we did have seemed almost disinterested and did not appear to add much value at all to the session. After I met the team I think it would be wise to give this motley crew their marching orders and bring in some of my own people....

"OK everybody, great session. Now lets introduce you to the new gaffer"

He led the team into the dressing room. I have to admit I felt butterflies at the pit of my stomach. Some of these players actually looked quite handy! What if they saw right through me? What if they didnt take me seriously? 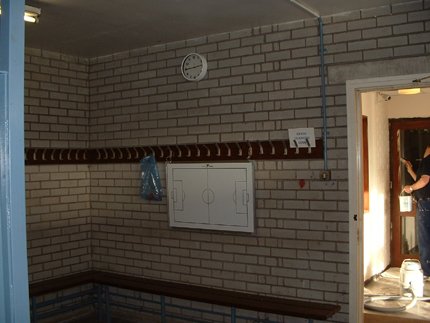