phinam51
10 years
After being fed up with all the EPL stories in forum, I've decided to start my new challenge in the Italy soil, and bring the glory back to the most exciting league in 90s. Hope you all enjoy the story

Naturally I'd love to manage a mid-table club, so Udinese with a media prediction of finishing at 10th is definitely the perfect choice for my taste. Besides, with quality youngsters such as Kwadwo Asamoah, Mauricio Isla, Gabriel Torje and Samir Handanovic, Udinese can develop to be a top team in Europe (hopefully).

Coming up next: Staff signing, Training facilities and Tactics
Login to Quote


Well, I'd love to build a club from top to bottom, so the first thing when I start a new career

is off-loading all of the current staff and bringing in the best staff available. 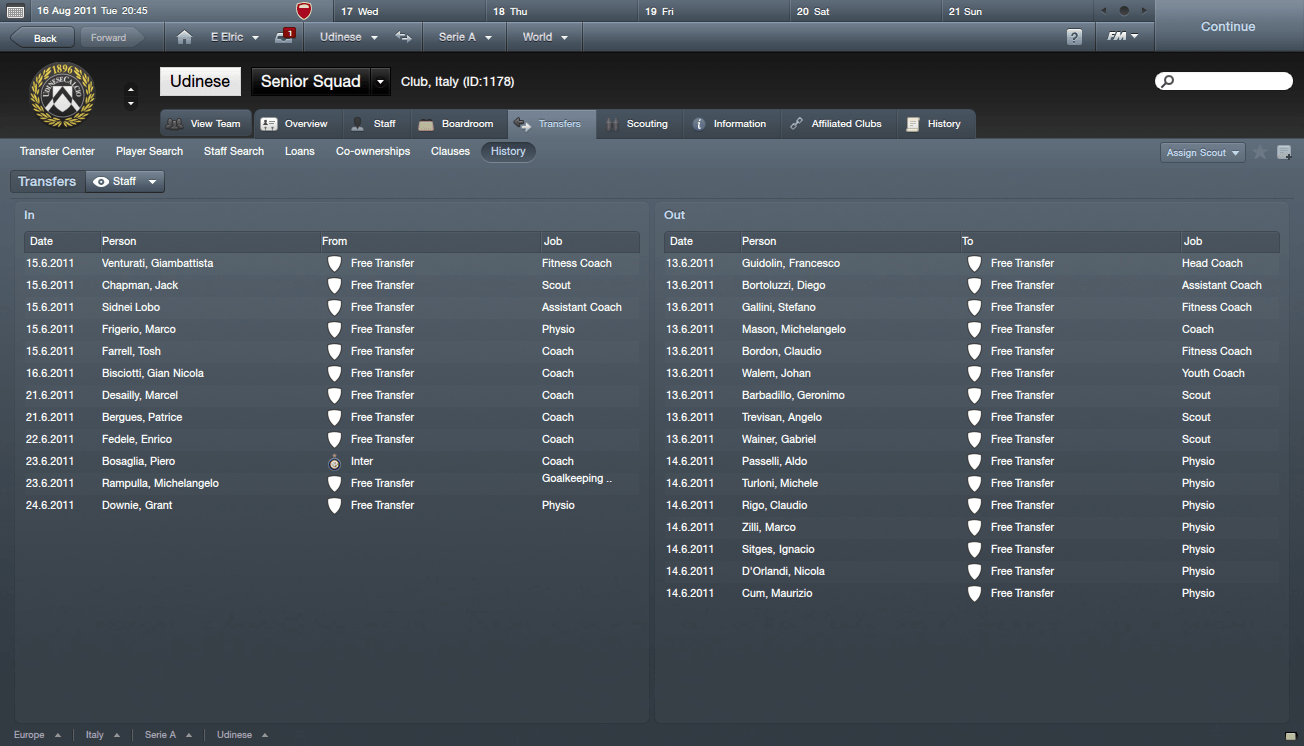 Since Italian coaches are among the best coaches in FM, I manage to get a all-4-star-and-above training in my first season with minimum wages demands. Most of the coaches I sign only require to be paid £2000p/w or lower. 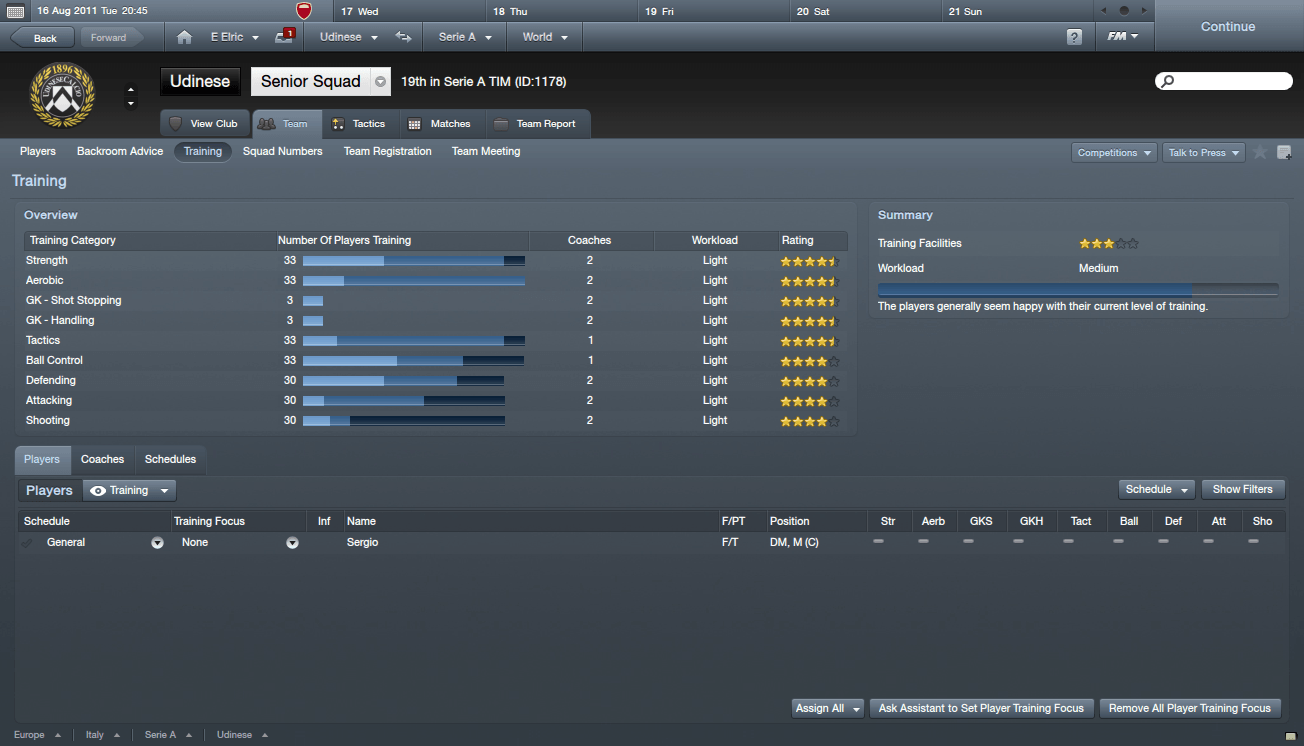 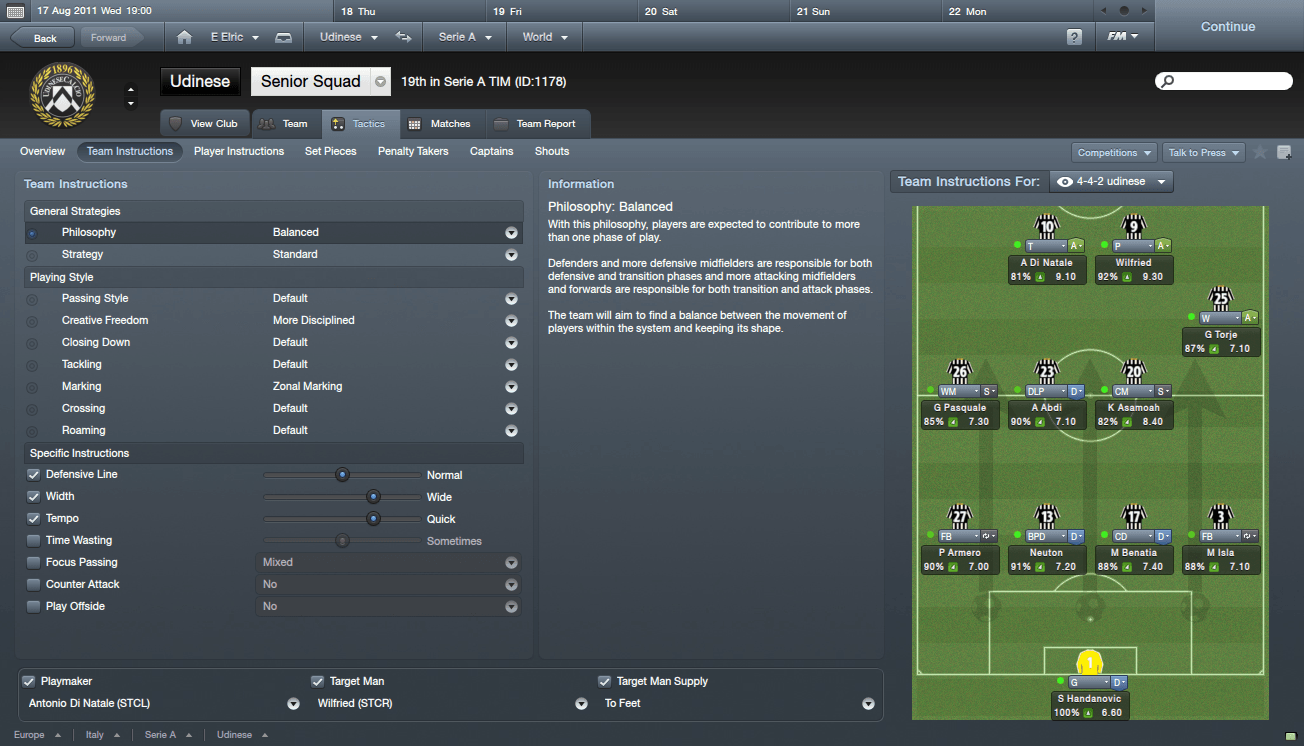 A variation of 4-4-2 with balanced and standard philosophy, and fairly quick tempo. The pic is pretty much said for itself so there wont be much to tell.
Login to Quote


After looking through the team report, one thing i realize is the lack of quality striker in the squad. Antonio Di Natale is the only decent striker but he's already 33. After some serious scouting, these young men has caught my eyes : 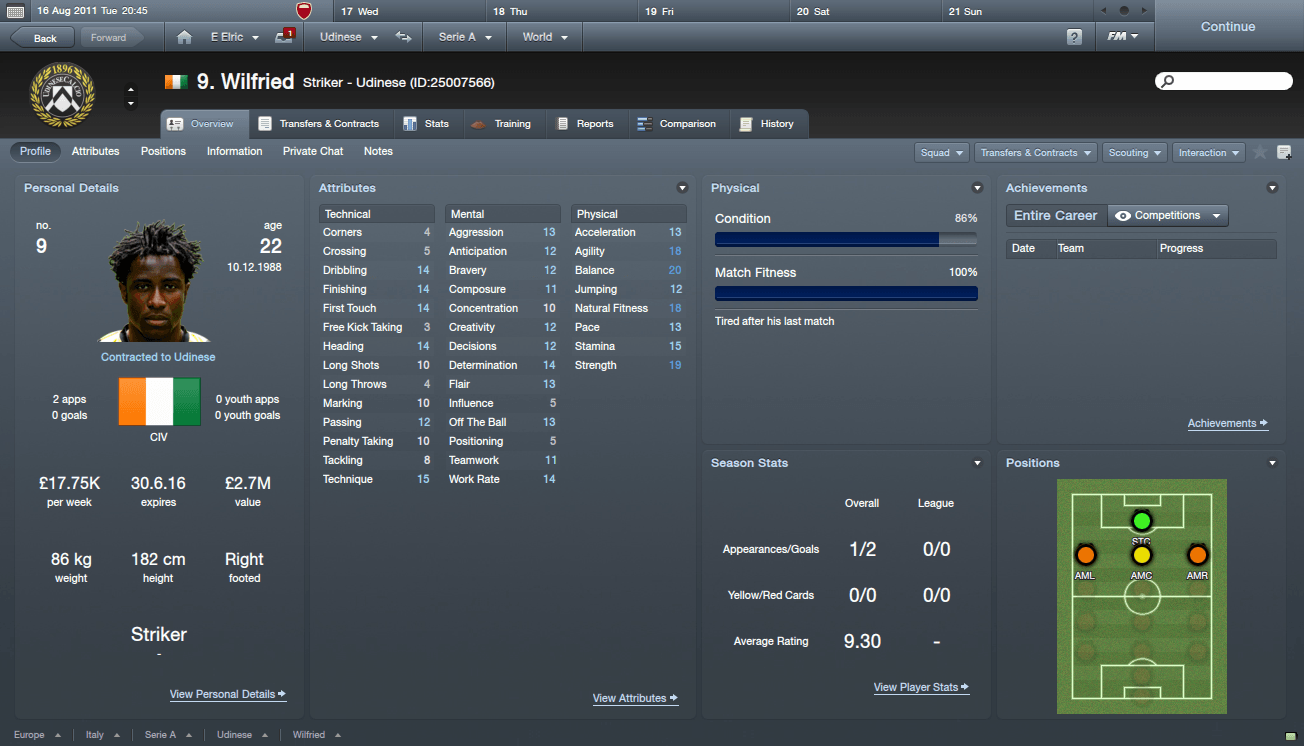 A Drogba ver.2 with balance 20, strength 19 and agility 18 O_O. HE is the destroyer that no defender willing to face. Decent finishing and heading (14 both), the only thing he lacks is composure (only 11) that might comes up costly. But with the price tag of £2.5m and age of 22, he's a definite purchase. 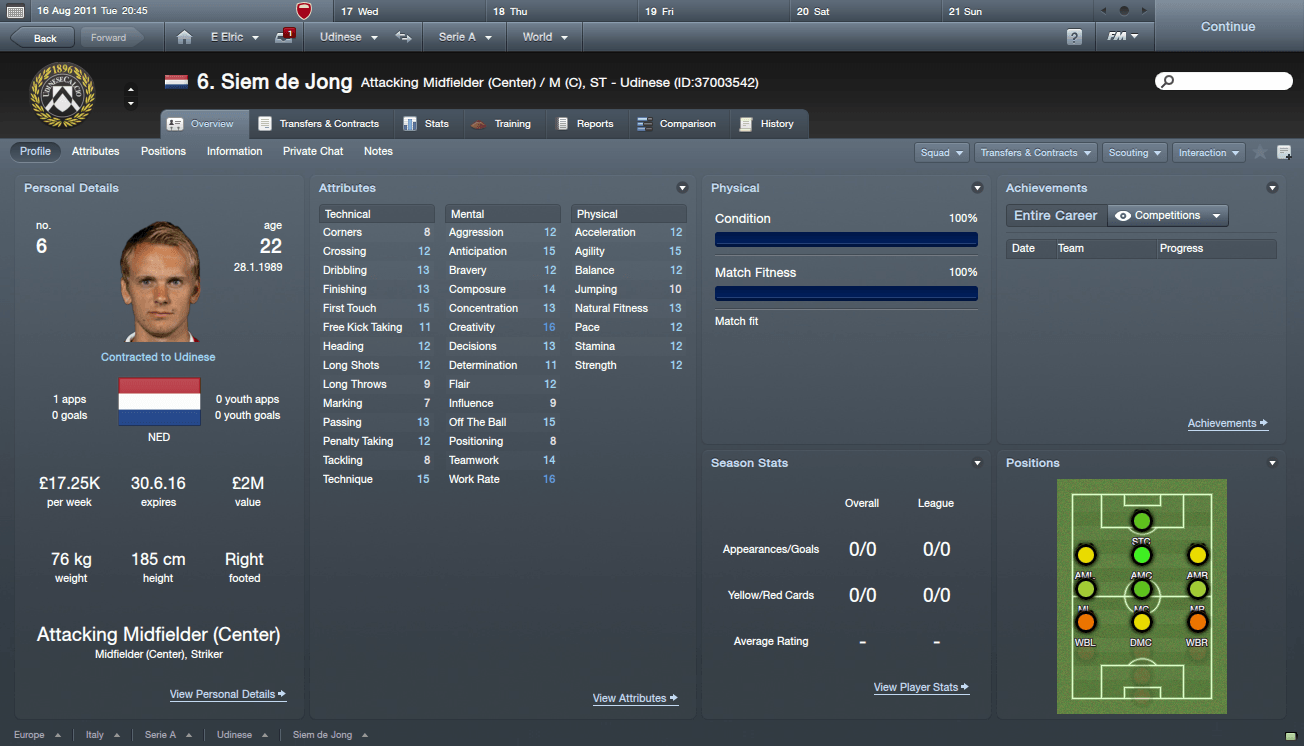 A versatile attacking midfielder who can also play well as striker and centre mid, Siem de Jong loves to use his creativity to create chances for his team mates and occasionally finds himself in a good position to score. Only 22 with £2.1m price tag, he is the perfect replacement for Di Natale when he's retired. 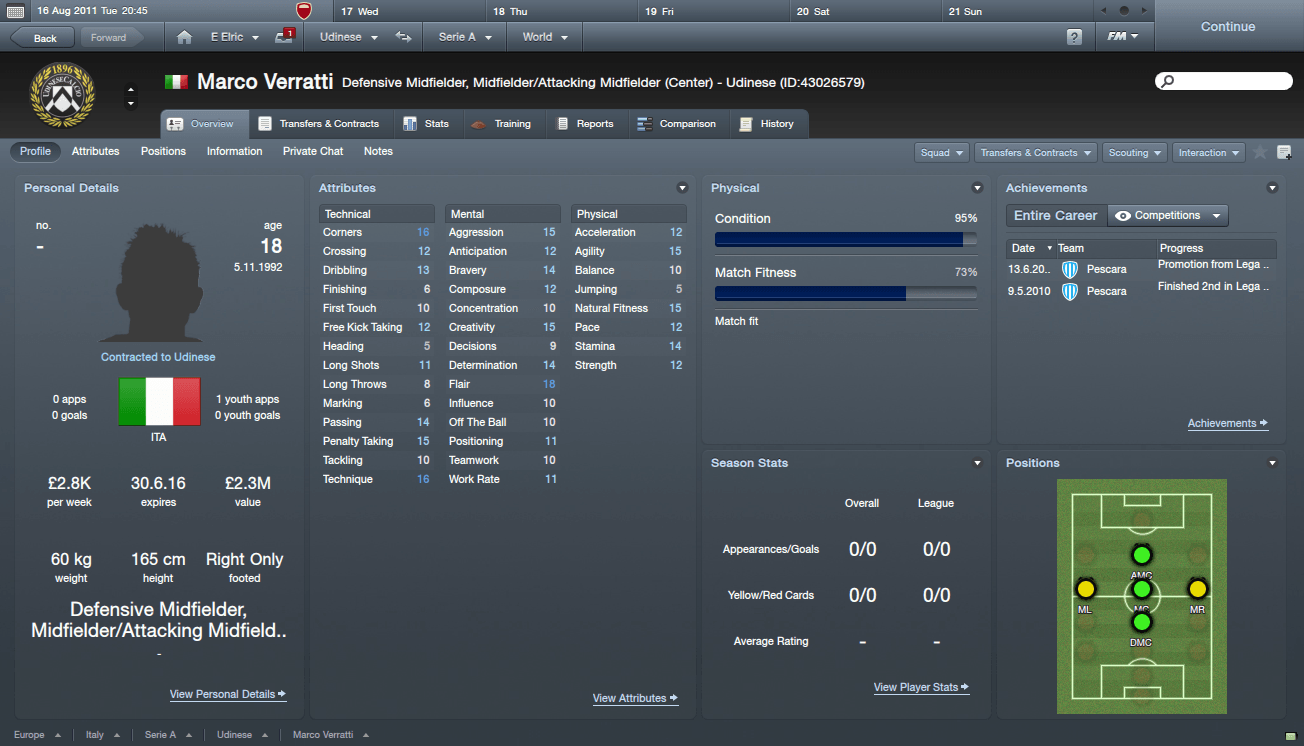 Well, everybody knows him and everybody loves him. He's young, he's Italian and he's cheap. Enough said

Bouderwijn Zenden and Sergio(Free)
Two experienced midfielders that will be decent back-ups for the team and hopefully be role models for the young lads.

Summing up, here is the overall transfers: 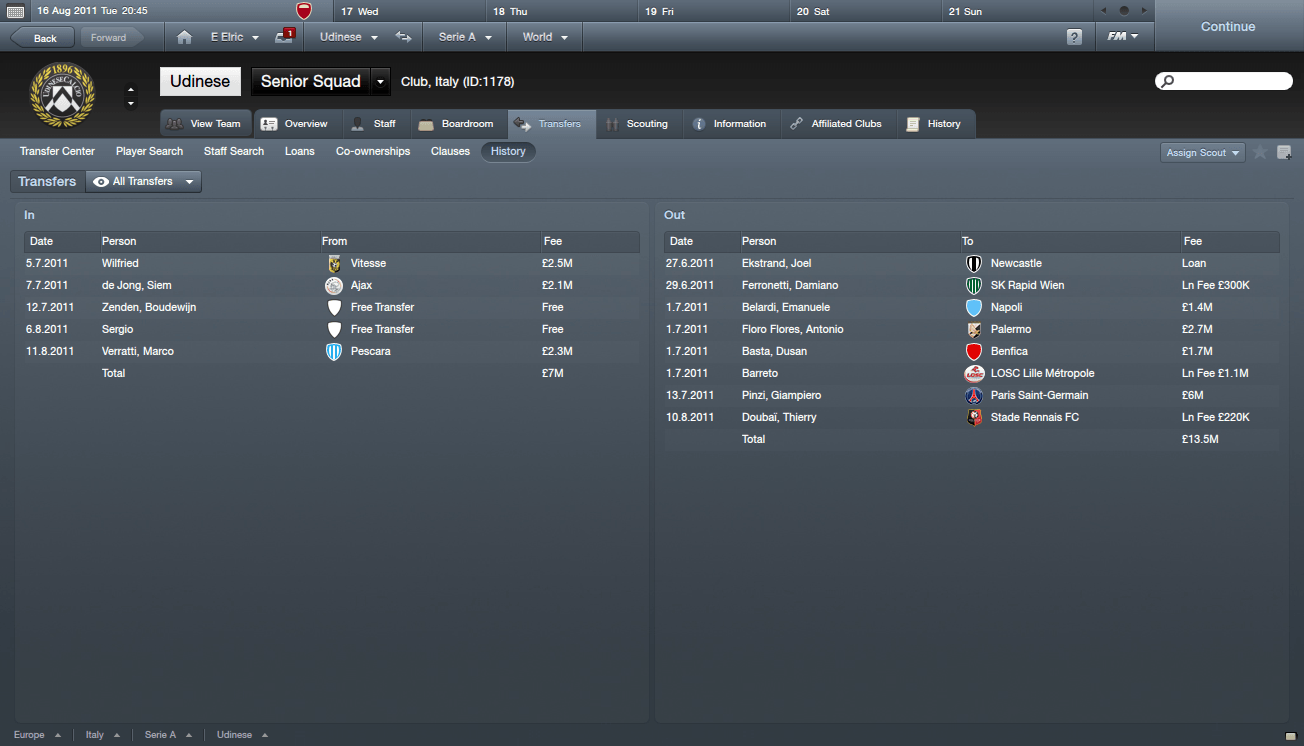 Bad news: Udinese has to be the most unlucky team in the Champion League Play-off draw. They will be facing Bayern Munich, the strongest team you can possibly get in this stage. The ability of the young Portuguese head coach will be put into a real test when his début game is against Bayern at Allianz-Arena!!!
Login to Quote 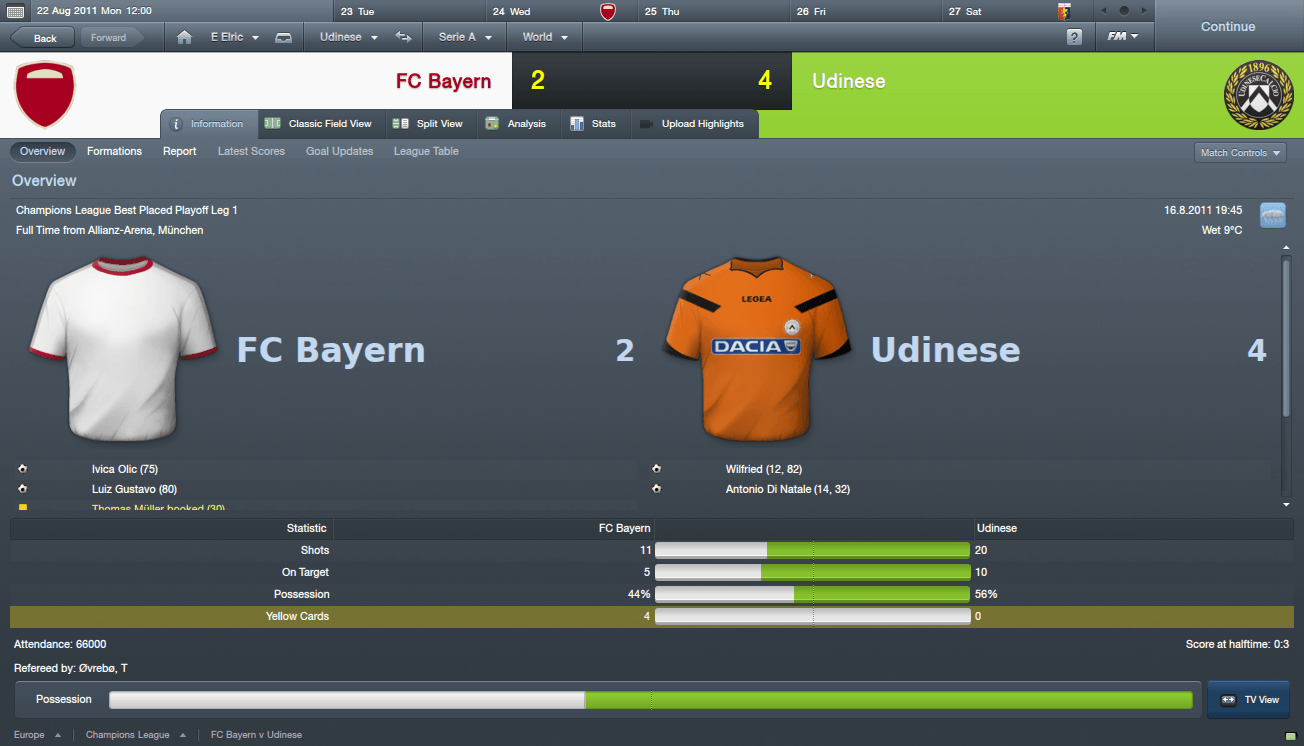 Wilfried had a début to remember!!! Vintage display from duo Di Natale-Wilfried led Udinese to their first official win of the season. 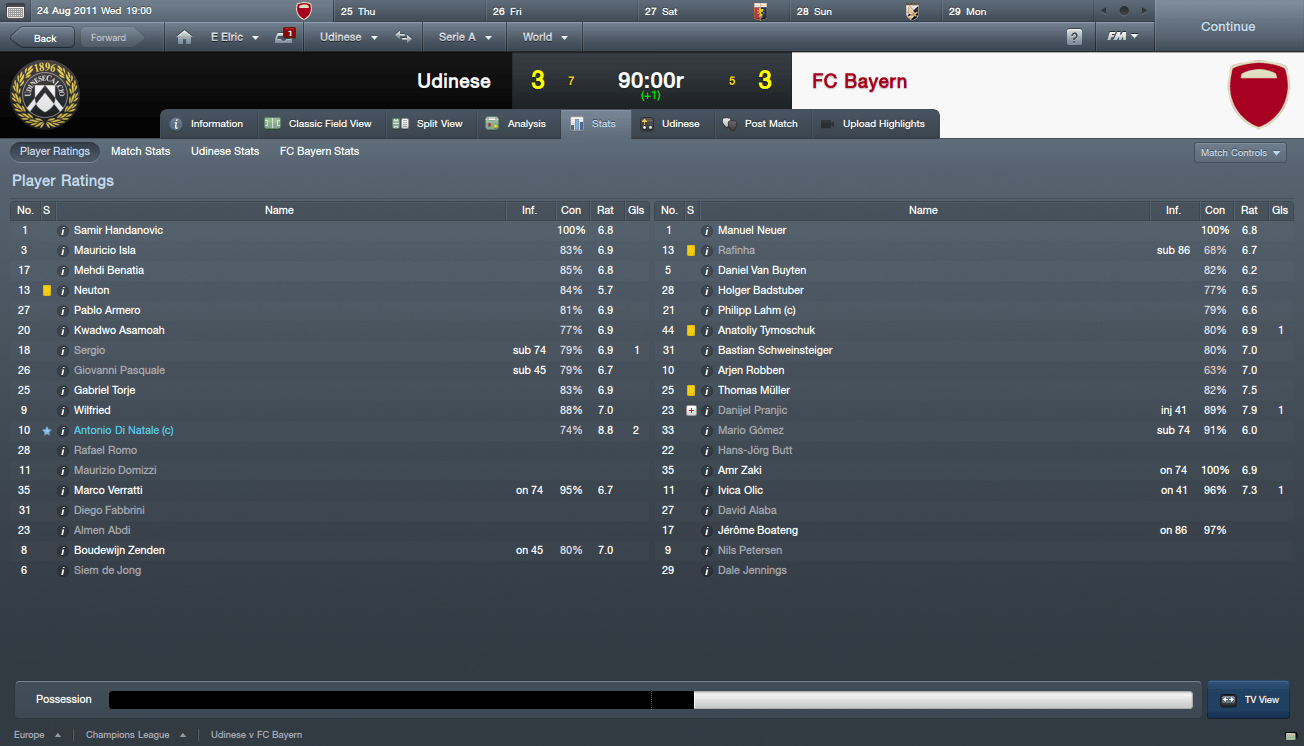 Bayern had brought up a good fight, been constantly pushed up the pressure onto home team, and at one point in game, managed to level the disadvantage from the first game. But captain Di Natale lived up to the expectation of thousands fans in the Friuli stadium with 2 goals. Udinese past Bayern to the Champion League group stage!! 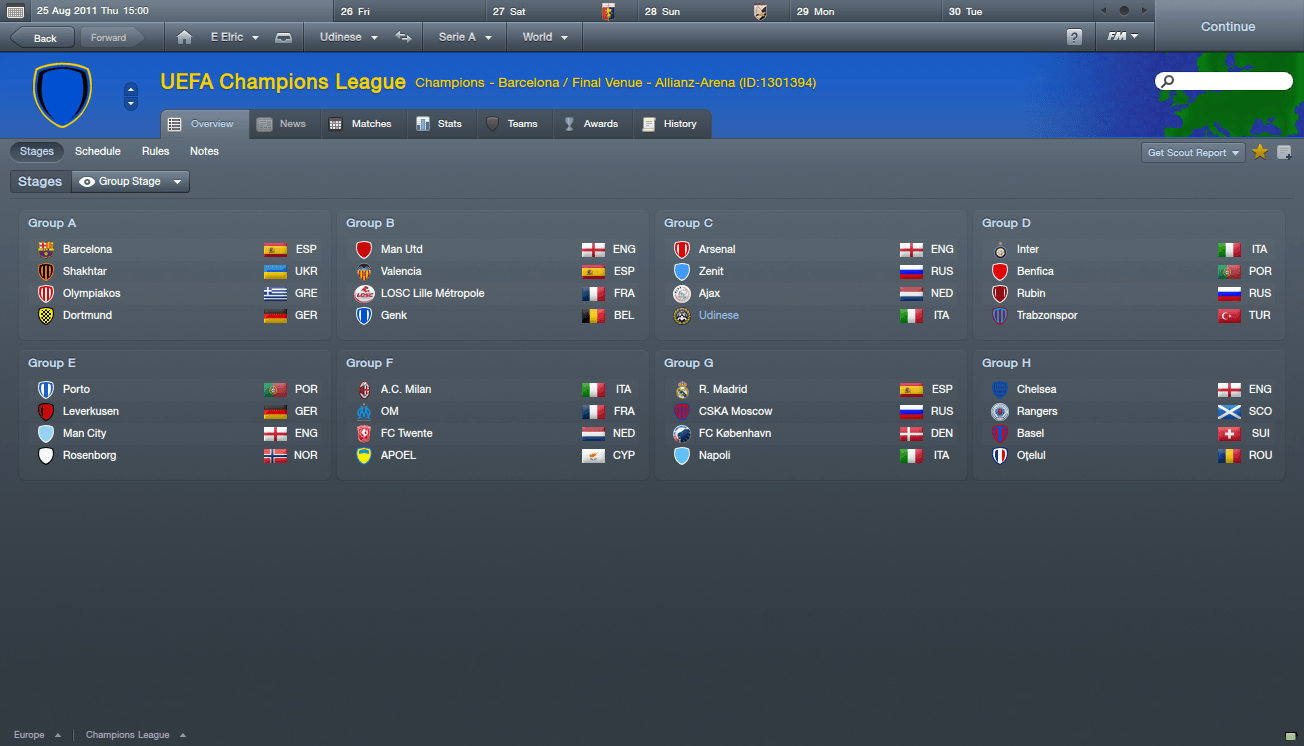 A tough group with Arsenal, Ajax and Zenit, 3 clubs with their unique attacking styles. I don't know if the 'Zebrette' warriors can battle to victory or be buried underground, but one thing I know is it will be a good fight either way.
Login to Quote

A fairly good start for Udinese, with 3 wins 1 draw and 1 lost. The lost against AC Milan is inevitable because they are superior side, but a goal-less draw against Chievo is a disappointment.

Udinese is on fire!!! 5 straight wins in October guarantee 2nd position in Serie A table behind Inter. The defence in absolutely stunning form with 6 shut-outs in a row. 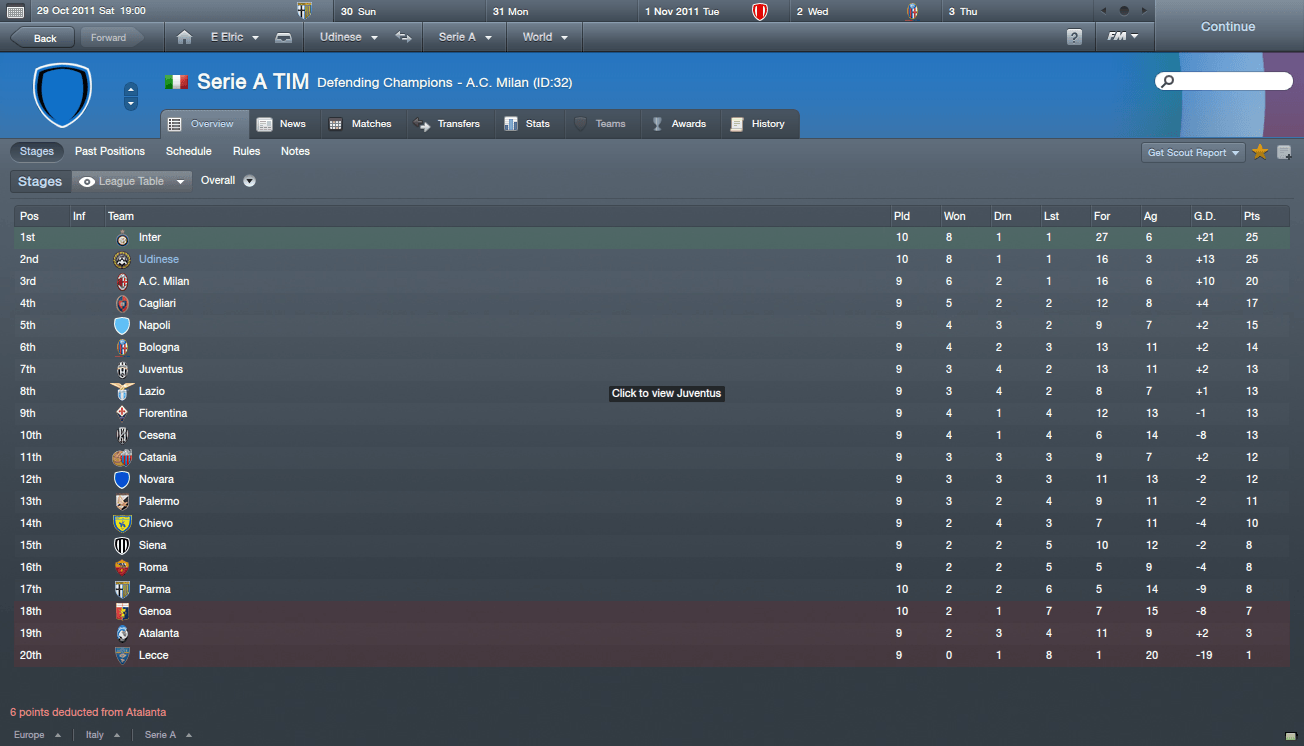 Bringing good form from domestic league into Champion League group stage, Udinese manages to 3 successive wins and conveniently sitting on top of group C. Antonio Di Natale celebrated the first hat-trick of the season for Udinese in the convincing 4-0 win against Ajax.
Login to Quote

Barnicle
10 years
Di Natale is a killer in front of goal and with the powerful Wilfried you could have a legendary season, just need to avoid injuries because Wilfried is very susceptible to injuries

Run continues, Udinese extends winning streak to 8 games in a row. Defence seemed a bit shaken at the Catania game but amazing strike forces did a great job to make sure Udinese remain in the title race.

Serie A, Half Season

A draw against Inter proved that Udinese had strength and determination to challenge for the Serie A title this season. Although Udinese can't match superior strike forces from Inter which fire 49 times in 19 matches, the Zebrette still manages to come toe-to-toe with the Nerazzurri in the battle for glory. Balance is the key 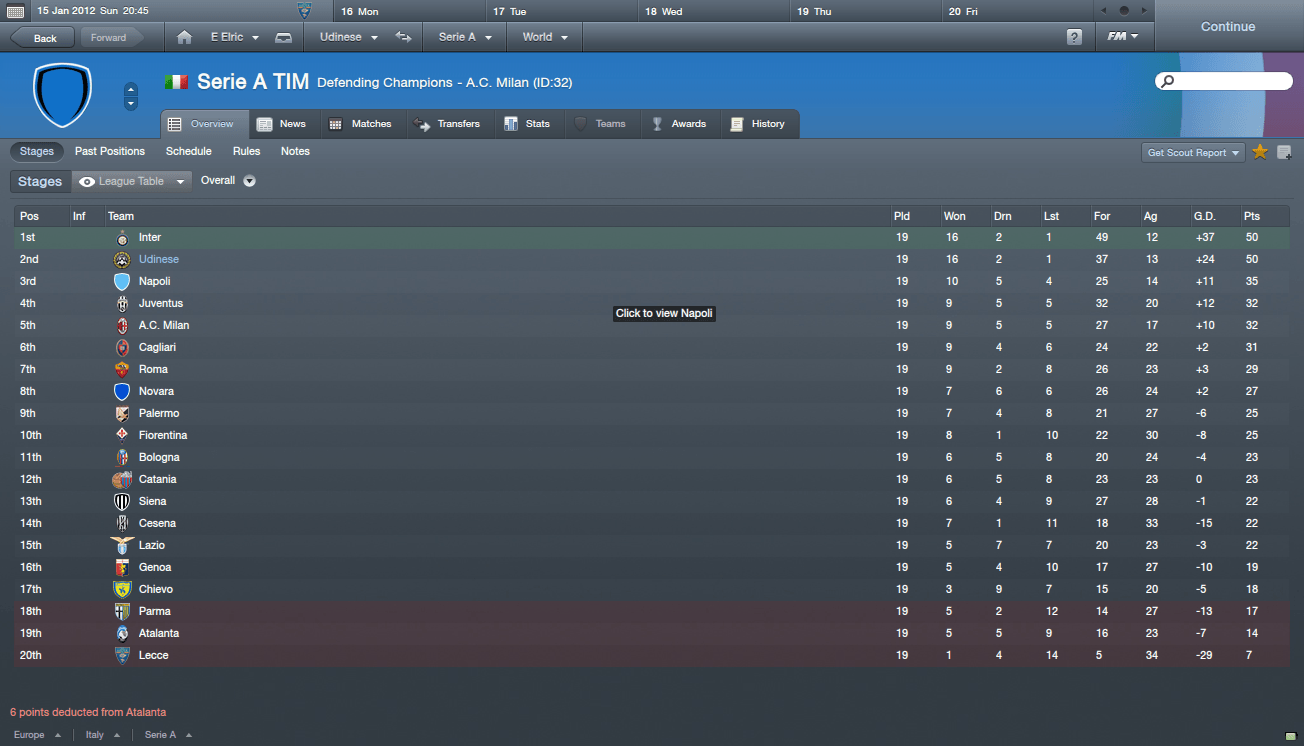 A defeat against Ajax keeps the team on the ground, and 2 solid wins against Arsenal and Zenit guarantee Udinese go through the group stage in 1st position. First knock-out round, Udinese will face LOSC Lille Metropole.
Login to Quote

phinam51
10 years
Wilfried has been superb for me this season with 18 goals/24apps. Di Natale scores 11 goals/20apps
Gabriel Torje assists 11 and scores 7 in 28 apps, Siem de Jong assists 8 in 26 games
Login to Quote

Udinese will face Napoli in the semi-final
Login to Quote 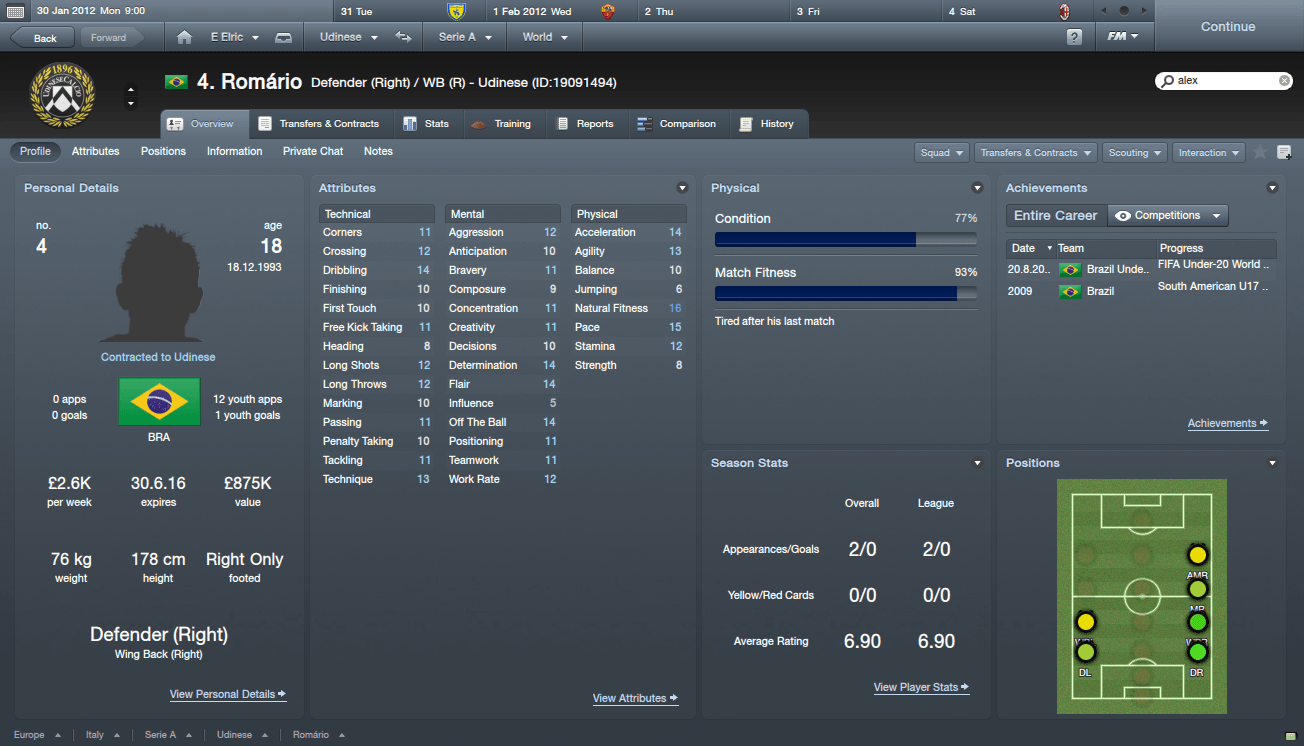 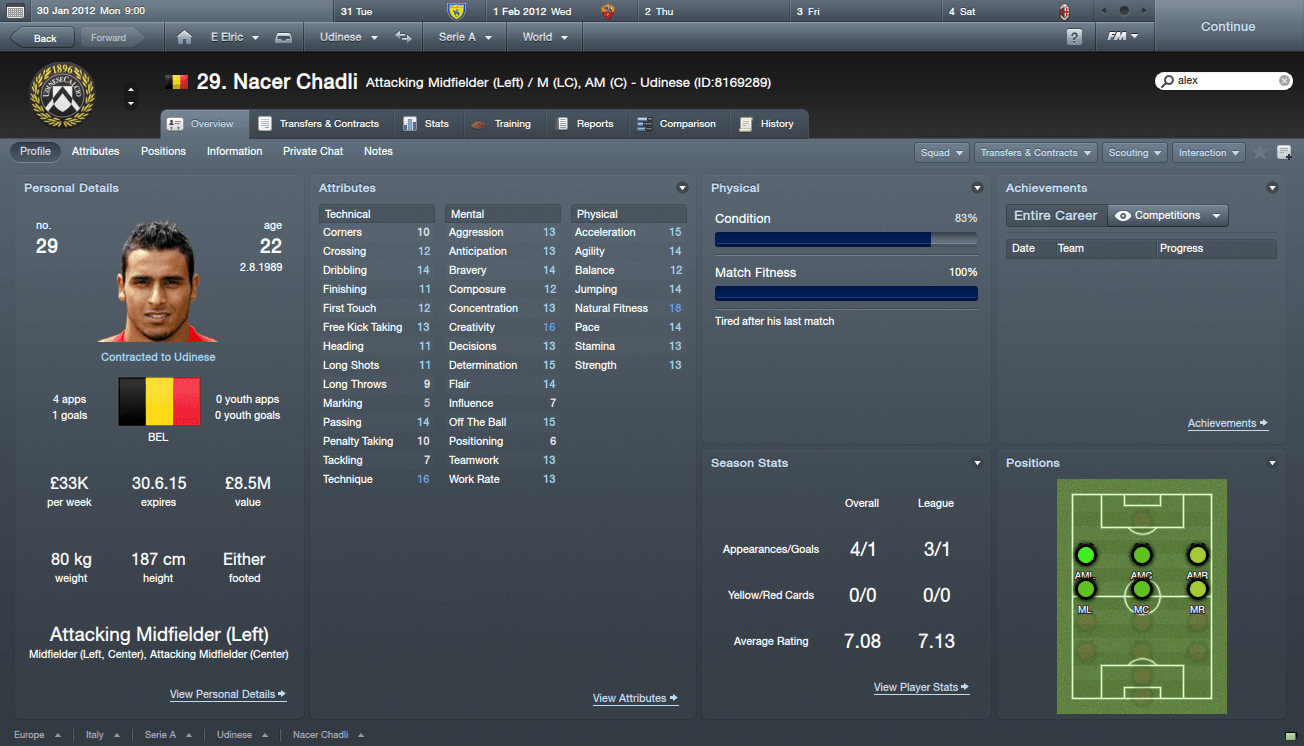 Young midfielder travels to Udinese from Twente with a fee of £8.5m. Brought in as a future replacement for Pasquale.

OUT:
Danilo: Out-of-favor center-back join Santos on a 6-month loan deal worth £325k
Miguel Medina: Young striker has his dream come true when joining Barcelona in a £3m deal
Critian Battochio: 19-year-old midfielder will join Rapid Wien in a loan deal to get some first team action
Abdou Sissoko: No longer needed by the club, he will join FC Nantes for half season on loan with the hope of making a permanent move in future.
Login to Quote

Nacer scores his first ever goal for Udinese with a close range effort. Zenden scores a stunning goal from 20 yards to seal the victory on extra time for Udinese

Antonio Di Natale (45+3)
Center-back Domizzi scores a header from a direct free-kick and captain Di Natale doubles the lead for Udinese before half time whistle. Bisa scores a consolation goal for Genoa during the extra time. A good win for Udinese as they manage to jump into the first place in Serie A table with 2 points advantage, after a goal-less draw between Lazio and Inter.
Login to Quote

You are reading "Udinese The New Adventure".