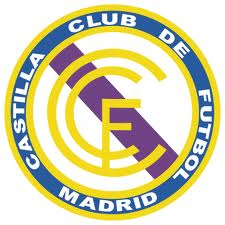 To My Fellow FMers
Hi before anyone says anything I know there is a story like this going on but I have being playing this game long enough to know that there is always room for one more but in my story am going to stay with Castilla unless I get offered the Real Madrid job I won’t be leaving only for Real Madrid that’s my goal to get the big job I hope people will follow this story also well thanks for reading.

The young 27 year old Irish born manager was brought to the club buy Jose Mourinho as a youth coach 48 months ago has done wonders with the youth team said Mourinho. Kavanagh has all the now how to become a great manager said Mourinho and with my help we will get that far. With Juan Politto the Castilla manager after leaving the club saying he was not in love with the game anymore an opportunity came calling and young Irish manager Jason Kavanagh put his name down and Mourinho was willing to listen to him after a long 3 weeks of interviews Kavanagh was givin his lifelong dream of managing Castilla witch he said will hopefully lead him on to bigger and better things in his career and that he was so thankful to Mourinho for giving him the chance Kavanagh knows all the youth players and staff really well and I have being showing him a few tips over the last 10 months and I know he will be the New Special One said Mourinho in a quick interview.

Kavanagh said I like to play attractive and attacking football but with a lot of possession, but we must have a strong back line also.
.
Also I know the broad really well I get along with everyone at the club we are like one big family so I hope I get the support of them and the backing of the broad. I said to the broad to be patient that I can’t build a team over night.

Also updates After every Month.
Login to Quote

#55810 Jason_Kavanagh : Class man that story lead up is super i no there is another one also going around but if you say your going to stay at the club ontill you get the main kjob that makes this story cool your lead up was class the story line behind it and the new special one aw mate i will defo be following please dont let it die and please do update every month BEST OF LUCK WITH THIS MATE


thanks mate emm whats your name is it jason kavnaagh thats mad lol my name is james kavanagh were you from mate??
Login to Quote

Na seriously hope you have a good story an stay at Castilla an maybe get the big job. I couldn't as it just wasn't run right....gutted there's another story like mine but fair doos lol.
1
Login to Quote


Ok so I had no transfer budget but I did not mind that as I am going to use under 19 players and my own players because I want the real Madrid job and if I develop this players now hopefully they will be taken from me and put into the team for when I arrive it’s a gamble but I am going to do it here is a list of the players I have brought into the team from the under 19s team.

Lethal_Touch101
7 years
Jese is a beast upfront !!!
Login to Quote


Ok first of all Real Madrid have giving me 3 of their players for the season witch I am happy about it was a busy month for me and my team with 4 pre-season matchs and one league game let’s have a look at the players I have got from Mourinho.

3 great players that will help me this season.

Now the 4 Pre Season matches that I have played were a great set. Here they are

A great Pre Season Wining all of my games Mourinho called me to his office to say what a great start winning all the Pre Season games and said to keep it up. I am over joyed with what he said and I Said no need to worry the team is ready.

Ok so the 1st league game as come here is the tactic I am using for the season . 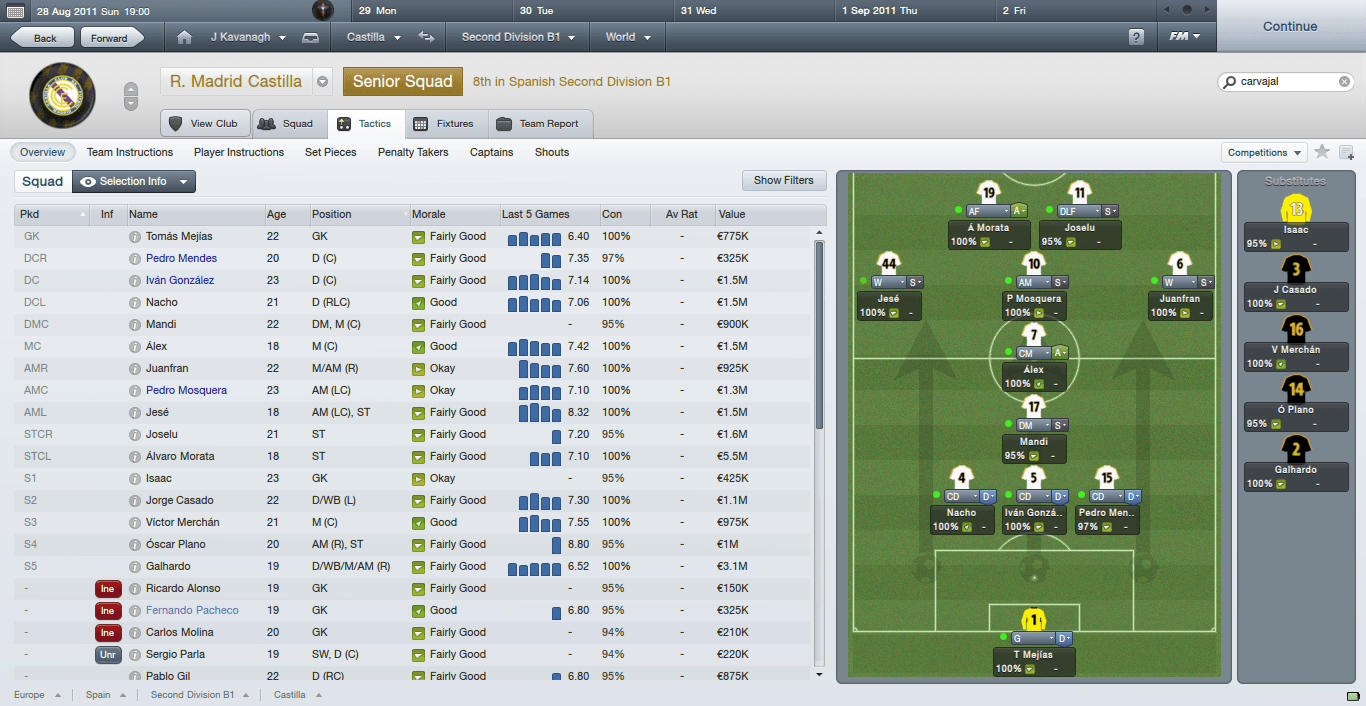 Other News
In other news Daniel Carvajal is out for up to 5 months witch is a big blow for me and my team but I no we can cope without him.
Login to Quote


In what was a bad start to the new season I am still confident that we can improve and fight for promotion this season I have addressed the team after the end of the month and told them to pull their socks up and start playing the way they know how to play well here is the matches that have being played.

So 1 win in 4 games is not good and I will be working on improving that over the next 4 weeks and I hope to come back to use with better news
Here is the League Table. 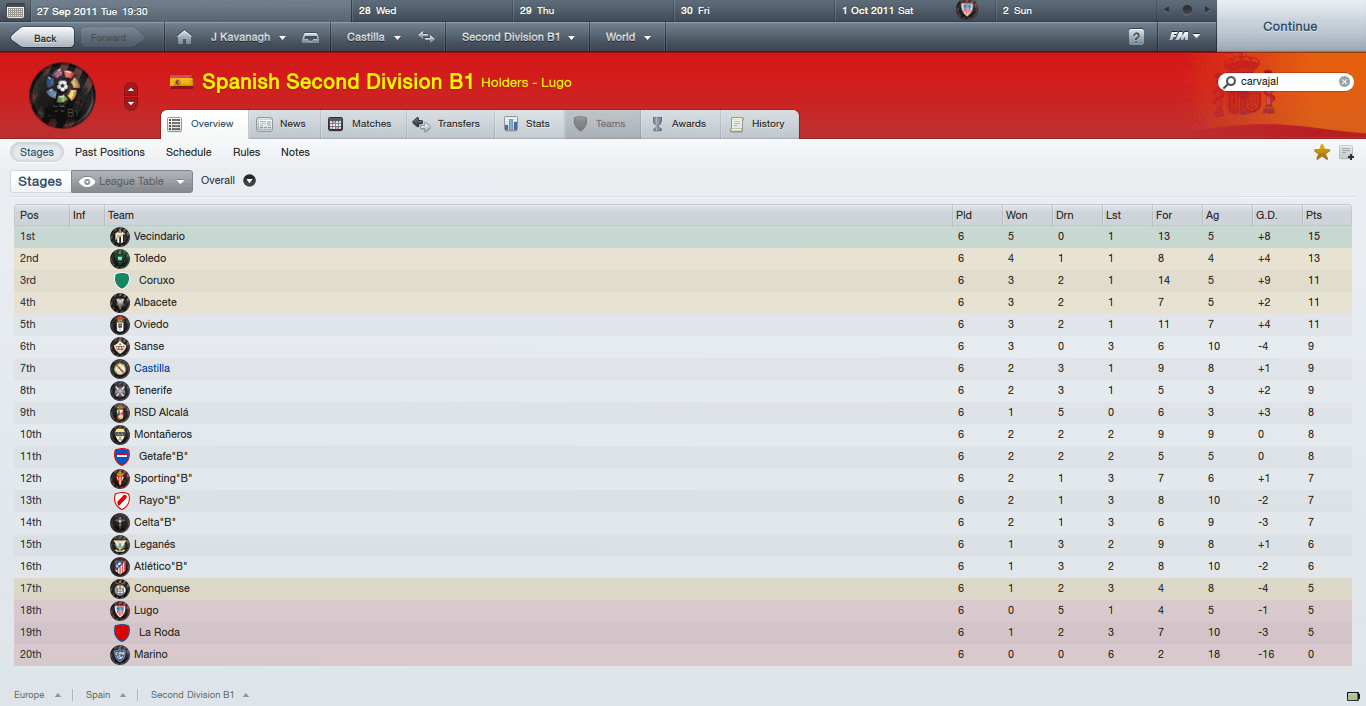 
Ok so in what was a better run this time gave the team a meeting told them to start playing and we are getting there I know there is more to come from this team still early days but we are on course for what we want out of the season here are the matches.

KrisConnolly
7 years
Looking good so far, keep this up
Login to Quote


Ok so another month Finished and my team is still not playing as well as I know they can play we played 4 games and drew the lot of them I have given the team a meeting telling them they can do a lot better than what they are doing I know I am not losing but I am drawing games I should be wining. I asked Mourinho if I could have a meeting with him so we set down and talked he thought me what way to approach the game and what to do giving me a few tips also we talked for about 3 hours and an hour and half was about football the other time was about family’s and goals we ended up going out for a few drinks (well I thought it was going to be a few) before I knew it the time was 4.30 and we were still drinking not making any sense I had to go so I said my good byes went home got one hour sleep and back to work. Mourinho rang me at 8 to see if I was up I was in work and all he was surprised and said that’s a good attitude to have. Well here are my matches over the last month.

Also The Federations Cup started a cup that I want to win in my 1st season well here is my match.

News
Jury Still Out For Castilla Boss
Fifteen games into the life with his new club and the jury still remains out on unknown manager J.Kavanagh tenure at penniless Castilla
With no major transfer transactions of note and with a good, Unremarkable record in the league so far, Kavanagh appears to have made a steady start at Alfedo Di Stefano.
Login to Quote


In what was a fast month with only 3 league games wining 2 out of the 3 of them is not bad and we are only 4 points of 1st spot going into January well here are the matches.


Ok so with January over with I made no bids on any players sticking to the team I have and also have no budget to bid on anyone I played 4 games this month getting 7 points out of them for some reason my team are not playing the way I know they can I have dropped some of my best players and still noting I no its part of the job and I am working with what I have and I am happy with the players and broad but I have told the players to pull their socks up for the last couple of months let’s hope they do here are my matches and a look at the league table. 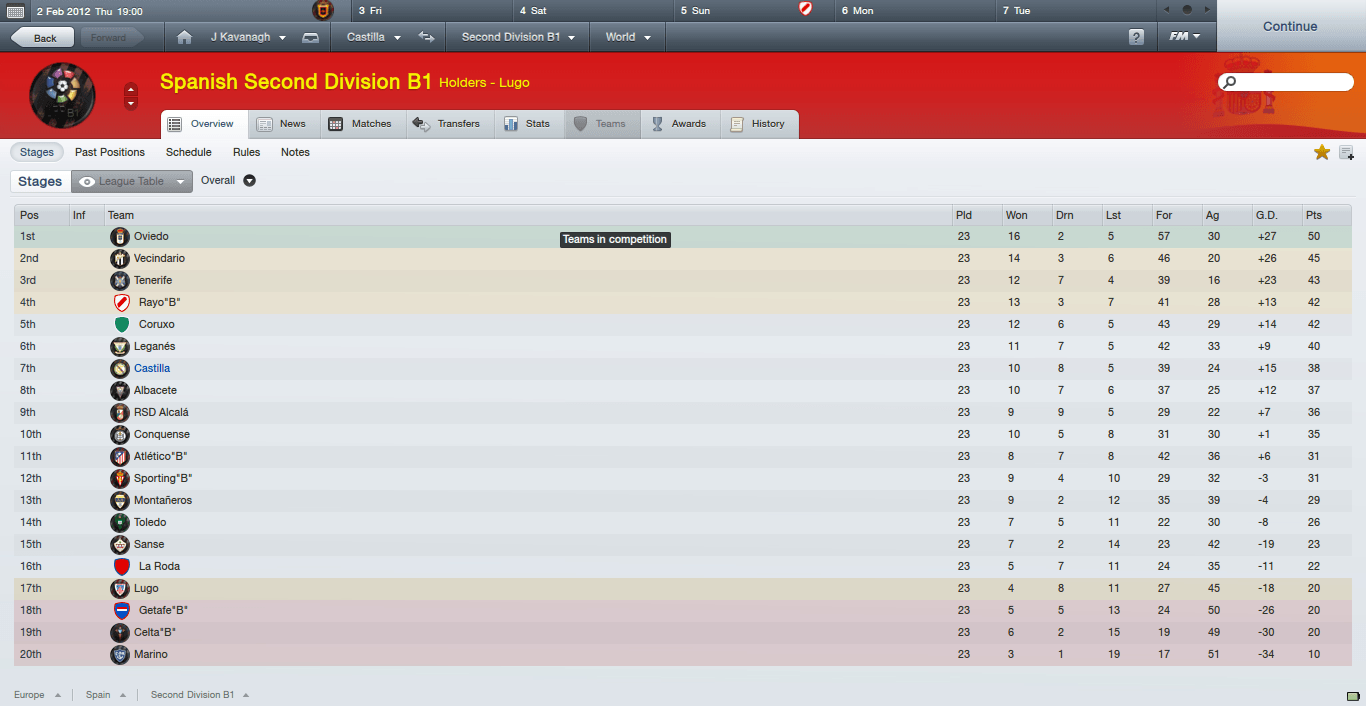 Also Round Two of the Federation Cup in which I want to win with my team and am looking good so far let’s hope we can keep the Cup run going.

News
Real Madrid boss has called Alvaro Morata back into the 1st team after the player’s performances for Castilla. Kavanagh said it’s a blow to the club but when I player plays as well as Morata does week in week out of Crouse the 1st team is going to want him but that’s part of the job things happen and it’s going to happen again and again and it’s something that I have to work with.
Login to Quote


February has being the best month of my season with the team playing really well now played four games won 3 drew 1 a great team performance from the lads and we are showing we are no push overs sitting in 4rt in the league now let’s hope we can stay in the top 4 for the season well here are the matches.

So am true to the semi finals and looking really good the dream is still alive.
Login to Quote

You are reading "The New Special One' Castilla'".