So guys hi,this me doing another story cause the other one is deleted just for the people who missed the previous post the story is me wandering in europe and trying to win everything basically,there was a vote earlier and the winner was FC porto so How about a little introduction from our old beloved wikipedia So let's start:
The club was founded in 1893 by a wine merchant, António Nicolau de Almeida.[7] The original stadium still exists (the field of constitution), currently serving the formation of the club, under the name Dragon Force.

FC Porto's nickname, "Dragões" (Dragons), as well as the name of their stadium, Estádio do Dragão (Dragon's Stadium), is related to the club's coat of arms. Until 1922 the club's emblem was a blue football with the letters FCP in white. That year, one of the club's players thought of combining that emblem with the city of Porto's coat of arms at the time. These arms, given by Queen Maria II in 1837 (subsequently altered in 1940), had a quartered shield, showing in the first and fourth quarter the arms of Portugal, and in the second and third quarter the Virgin Mary holding the Child Jesus. The crest of the Royal House of Portugal was a dragon holding the motto "Invicta" (undefeated), surrounded by the collar of the Order of the Tower and Sword, Portugal's highest honour, bestowed on the city by the queen after the undefeated siege of July 1832 – August 1833. Still today the official titles of the city of Porto are: "Antiga, Mui Nobre, Sempre Leal e Invicta" (ancient, very noble, always loyal and undefeated), and to this date, the city is often referred to in Portugal as "a (cidade) Invicta" (the undefeated [city]). The colours of the club may likewise be inspired by the historical colours of Portugal: until the overthrow of the Monarchy in 1910, the Portuguese flag was blue and white (instead of the modern green and red) with the coat of arms of Portugal in the centre, crowned by a royal crown.

Blah,Blah,Blah Really No offense to anyone what did catch my attention is that the club founder was a wine merchant !!
That Means free Booze to everyone!!
oh and also the clubs financial state is really bad ! so will have to keep it easy with the signings 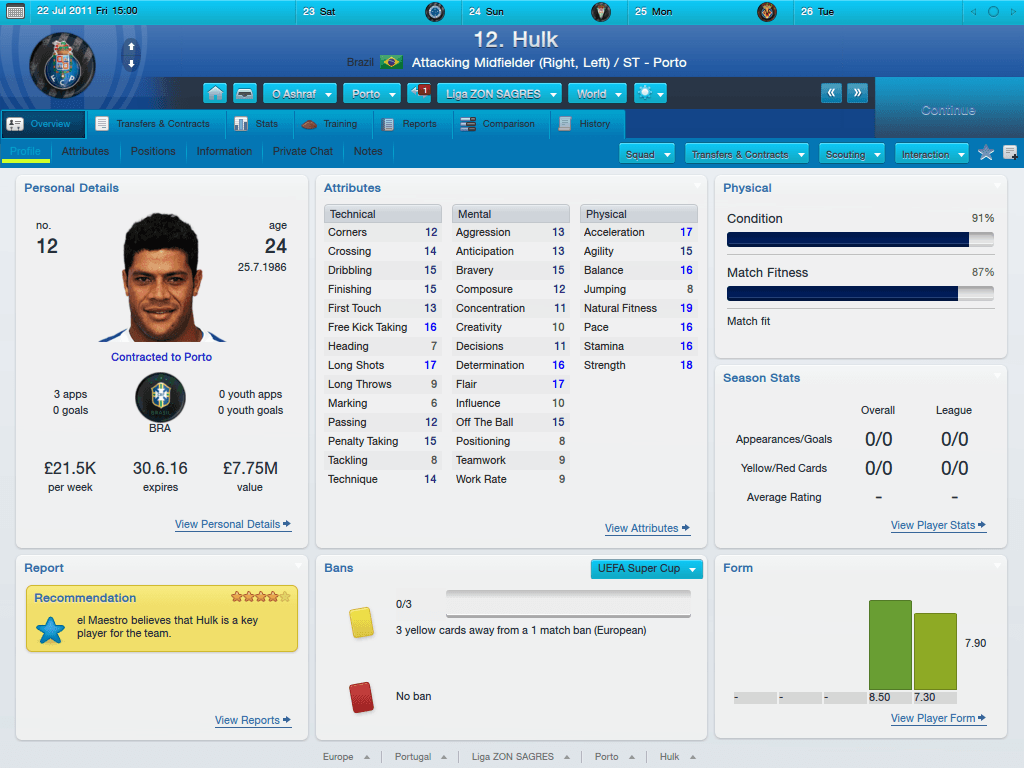 Probably the most wanted and expensive player in porto,without him the team really declines in term of attacking movement 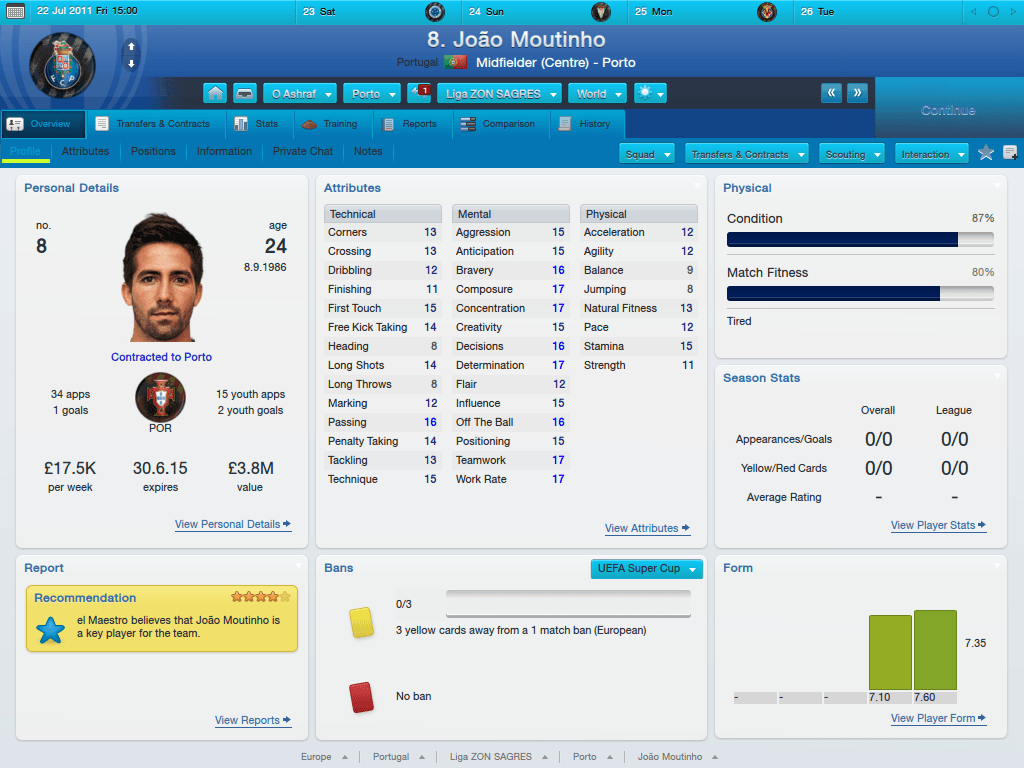 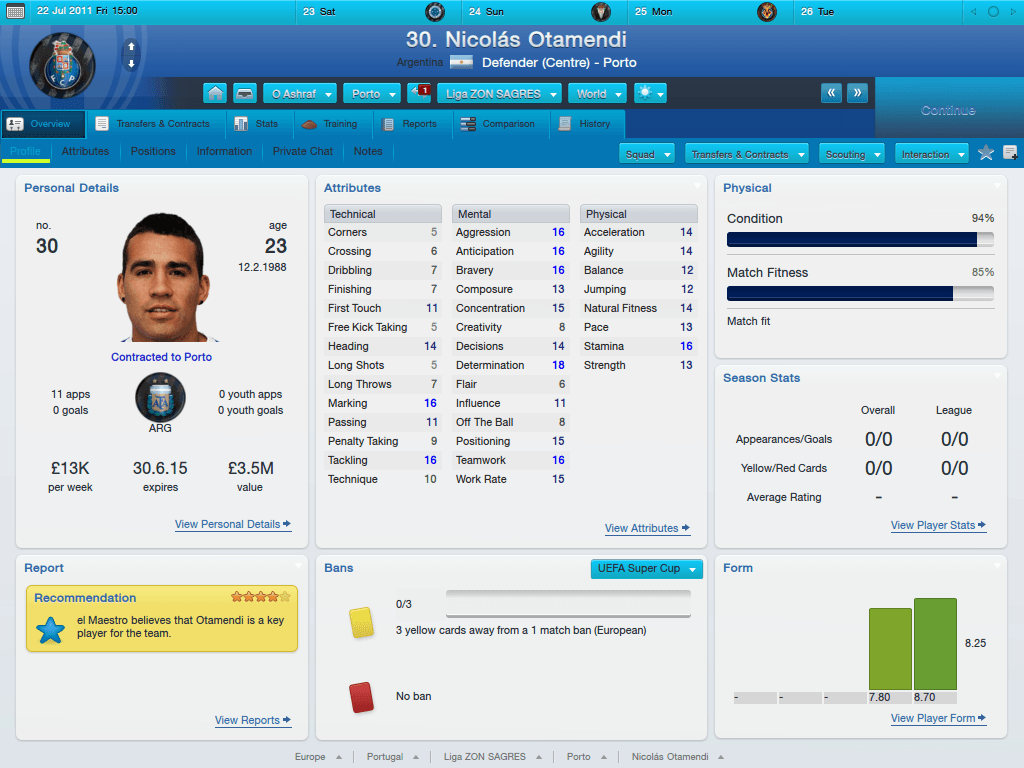 .Help With the club financial issues
.Do the Double
.Round of 16 of The champions league

So that's it next is the transfers and the friendlies
Hope you will enjoy this story !
Login to Quote

blue is the colour
10 years
Cant wait to see how this story unfolds and what skin is that because that skin is tasty!
Login to Quote

#59993 blue is the colour : Cant wait to see how this story unfolds and what skin is that because that skin is tasty!

Yh Me too who knows what will happen in 3 season! and the skin is revolution light and yh it looks delightful isn't it
Login to Quote

LFC_adammay98
10 years
Good story so far, one question who is the favourite to win the league? Also can we see your formations and starting XI?
Login to Quote

#59999 LFC_adammay98 : Good story so far, one question who is the favourite to win the league? Also can we see your formations and starting XI?

FMRegen27
10 years
[/h2] Transfers, Friendlies And Best Eleven [/h2]
Hello lads and welcome to the second of many updates ( I hope 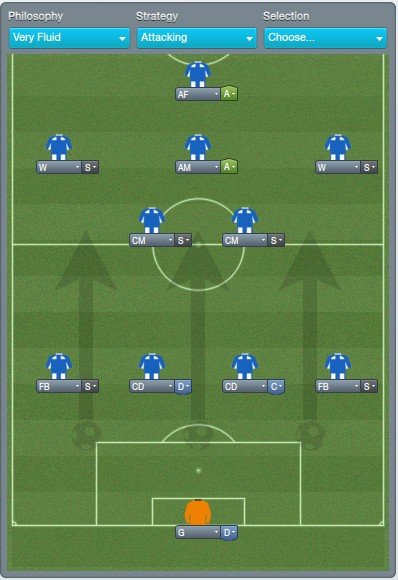 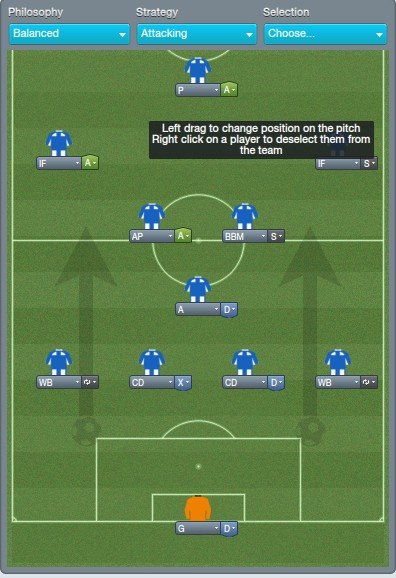 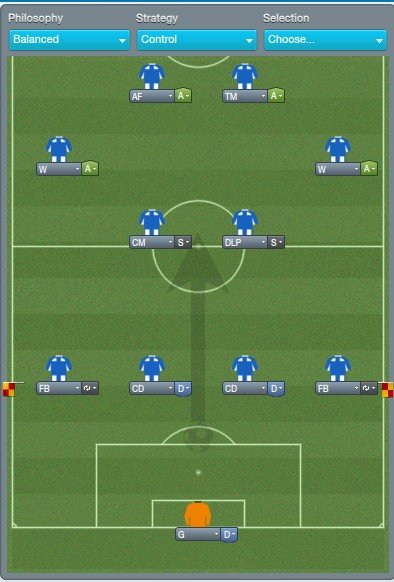 This Transfer window was about the necessary transfers only trying to chop of the dead wood for profit So let’s get going with the deals: 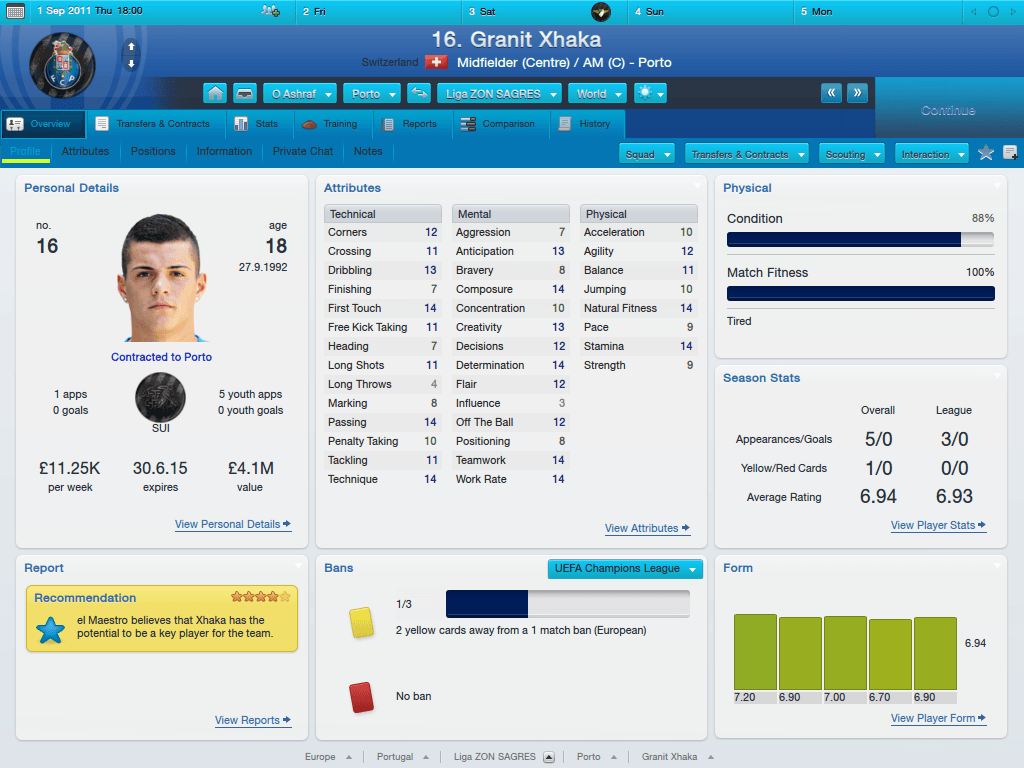 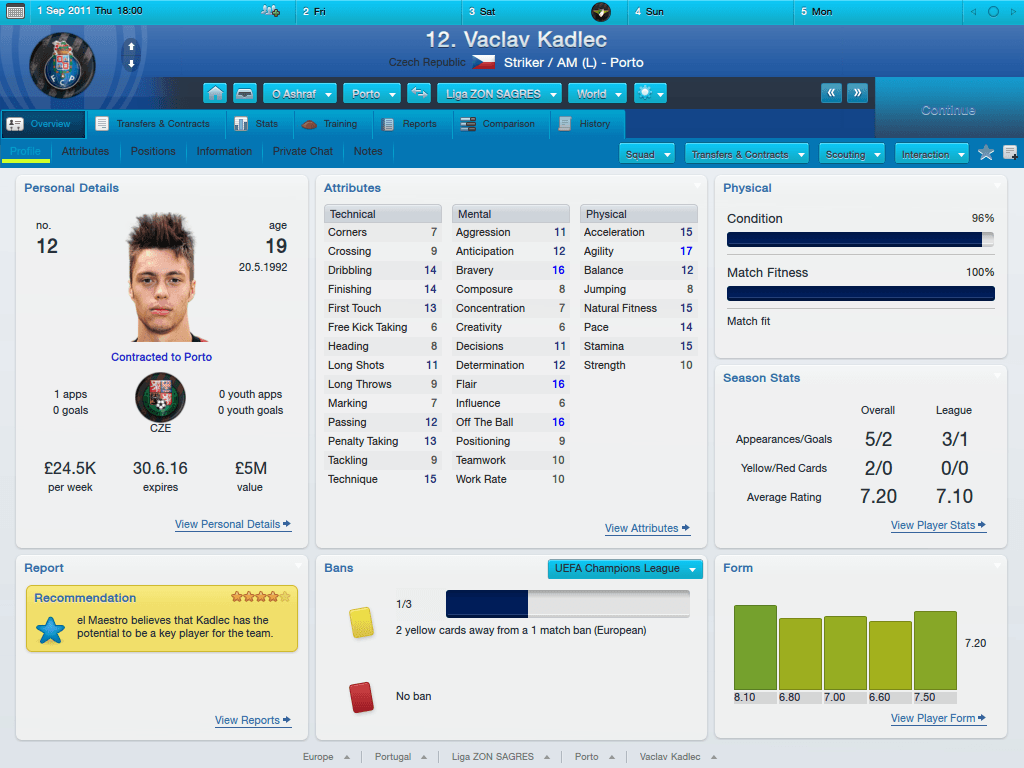 Another wonderkid, he’s a striker but can play as left wing so he will be useful as i switched hulk to the right flank
Current Ability:

Cristian Sapunaru To Torino for 1.6 Million
Walter to Leverkusen for 2.3 Million

My Best Eleven To start with next season 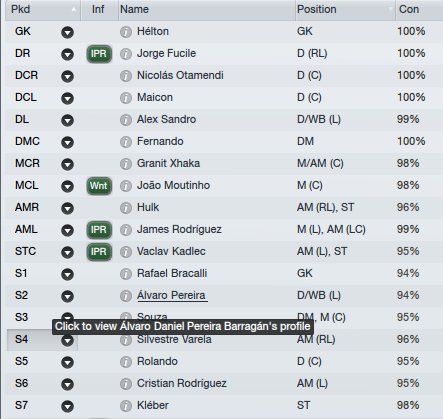 Not really much to deal with really but with kadlec and hulk and J.Rodriguez i think i have a deadly attack

So that’s it for now lads, there will be an update today
Login to Quote

swanny8589
10 years
with the signing of vaclan kadlec you should have looked at his composure and concentration stats because they are both terrible . and as a striker there 2 very important attributes
Login to Quote

#60080 toonman8589 : with the signing of vaclan kadlec you should have looked at his composure and concentration stats because they are both terrible . and as a striker there 2 very important attributes

mcfc1985
10 years
Interested to see how your 1st season turns out. You've done well with little funds to get 2 wonderkids so early on , I wouldn't worry just yet about the composure stats etc being so low as they will progress as he gets older and gains experience. Porto have a decent squad and your tactics look nice so you could be on to a winning side there.
Login to Quote

#60095 mcfc1985 : Interested to see how your 1st season turns out. You've done well with little funds to get 2 wonderkids so early on , I wouldn't worry just yet about the composure stats etc being so low as they will progress as he gets older and gains experience. Porto have a decent squad and your tactics look nice so you could be on to a winning side there.

Good luck with this one, mate !
Login to Quote

Good luck with this one, mate !

http://media.vivanews.com/images/2011/02/24/105620_pemain-fc-porto.jpg
The Beginning ,this will be my introduction to the FC Porto Fans so i’m hoping to make a good impression, this month is also important to this story cause I can get the chance to win two trophies due to porto getting involved in the Supertaca Which is like the Portuguese community shield and the Euro SuperCup against Barcelona which will be a hell of a match and the league which is basically a walk in the park looking at the other 15 teams.


Super Taca – First Of many

First trophy retained, Hulk went mad and kept scoring and assisting and got man of the match ,Kadlec made his debut scoring a goal and silencing his critics (*cough* Bad composure )


Vit.Guimaraes –the only easy day was yesterday

This Was a entertaining game really ,but not for me of course as I watched my porto side take the lead and the lose it 5 minutes later but thanks to Otamendi’s 93th minute winner I got a proper debut so let’s keep it going

Barcelona – that’s Football GET USED TO IT!

They only had one shot on target , and we had the weirdest goal chalked off but that’s football !


Vit.Setubal – He’s Back on his Scoring Form!

Top of the league! Undefeated it’s amazing ! that’s the end of the month 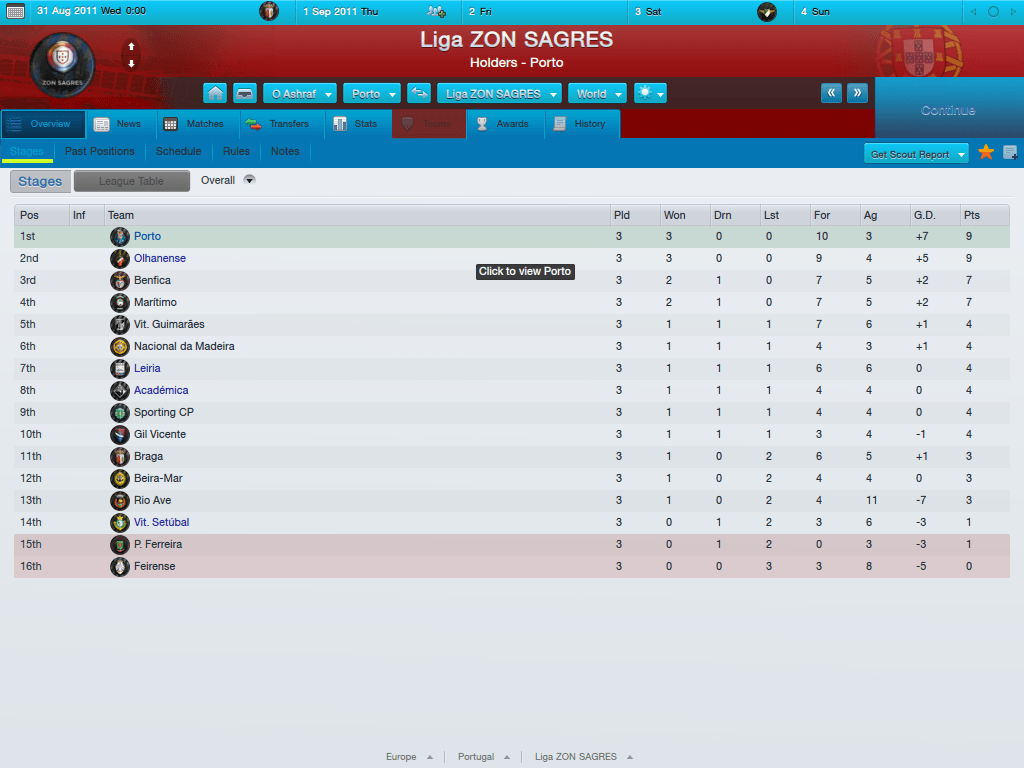 That’s it lads so will see you later !

http://static.guim.co.uk/sys-images/Guardian/Pix/pictures/2009/12/9/1260320657558/FC-Porto-players-celebrat-008.jpg
Hello guys and welcome to another update from The world wide trophy hunt , this month was different it wasn’t easy like every month cause we got handed the group of death in the champions league (Lucky ME) but we will fight till the end and qualify that’s the aim other than that the league is still a walk in the park.

First UCL win will definitly Give us a boost for the next UCL game
PS: una vittoria è una vittoria means a Win is a win

Two Goals!!! Only Two Goals !! We came close to losing two points but luckily we pulled ourselves together and kept the win 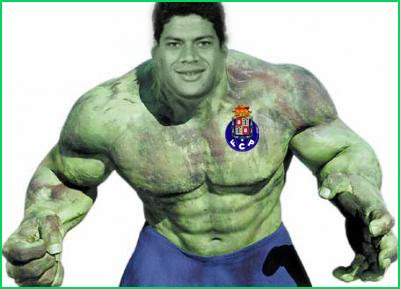 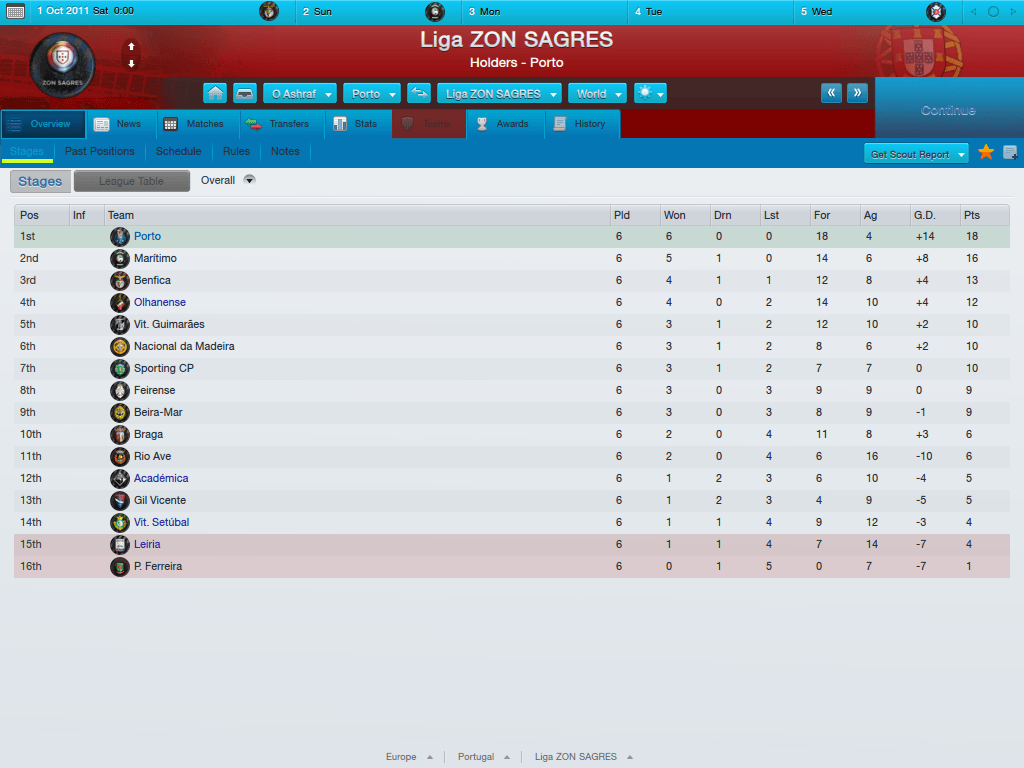 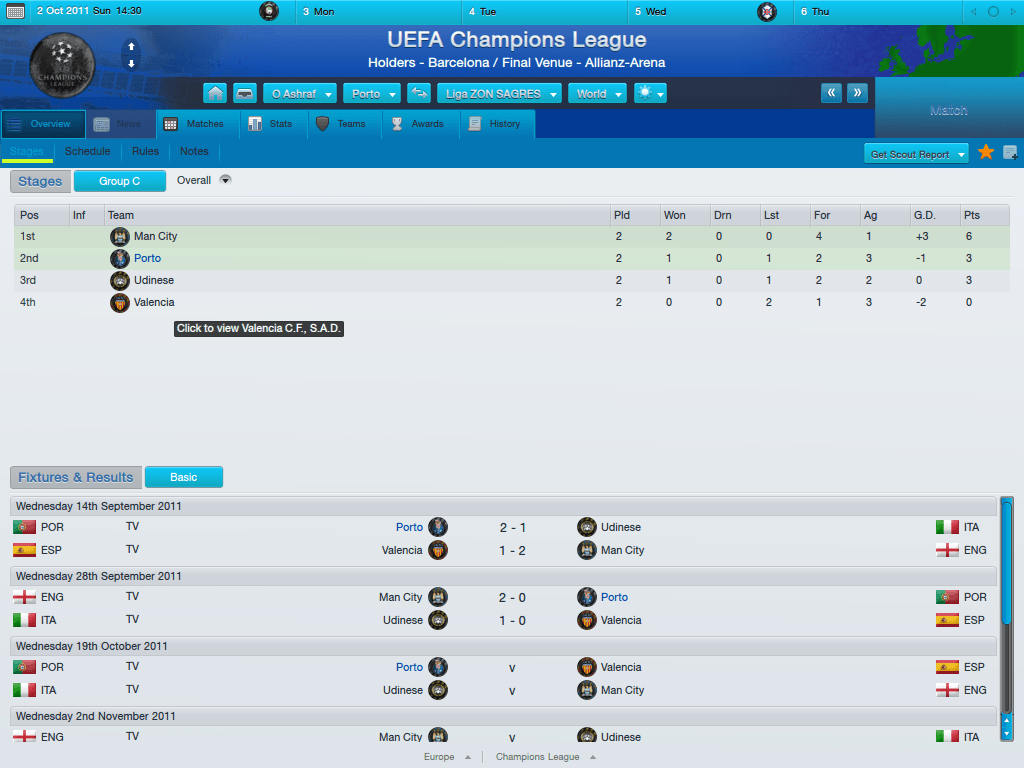 So that’s it cya next time
Login to Quote