I was born into a pretty normal family in England, London, to a family of Asians. My interest in football was there from a young age although I showed little to no interest in playing professional football although I had a bit of skill in the sport. Instead my interest was based in management. I always wanted to take control of a club in England one day, and conquer Europe. Yep, that was a dream alright.

Once I finished my studies I started looking for a job in football and eventually clinched a contract with League 2 minnows Mansfield Town in May 2004 as a youth coach at the club. I stayed on for four years in that capacity and although the players were very little-known themselves let alone the staff, I was rather content with my job because I loved it and it was not often you got a job that you loved.

After four years, Mansfield got relegated and my talents were recognized by Stoke City who had recently finished 2nd in the Championship and would be promoted to the English Premier League the next season. I was offered a contract as a first team coach and I jumped for the chance to sign with a club in the top tier. The club I supported, Liverpool, finished 2nd place and Manchester United won the league in my first year at Stoke, and we finished 12th ahead of the newly promoted teams that came to the Premier League with us as Hull City finished 16th and last season's Championship winners West Bromwich went back to where they came from as they finished rock bottom and were relegated.

The next season, Stoke finished 11th, a place higher than our previous season, as Chelsea won the league. We showed no signs of getting relegated as we then finished 13th the season after next.

The job at Stoke City was a delightful one and when Andre Villas-Boas resigned from Tottenham Hotspur after only two weeks in the job to accept a job offer of a sports psychologist from his homeland and former club FC Porto, I was rather surprised to see I was linked with the job. In a desperate attempt to persuade me to stay Stoke offered me promotion to assistant manager to Tony Pulis, but I stalled the offer, putting it off for two weeks....
Login to Quote

Kiwi
10 years
Best of luck with Spurs....they have a decent squad, but no Ryan Nelsen anymore.

Glenn T
10 years
A formal contract offer has been given to me by Tottenham chairman Daniel Levy, and I have accepted the contract to make a big step-up from coach to manager... 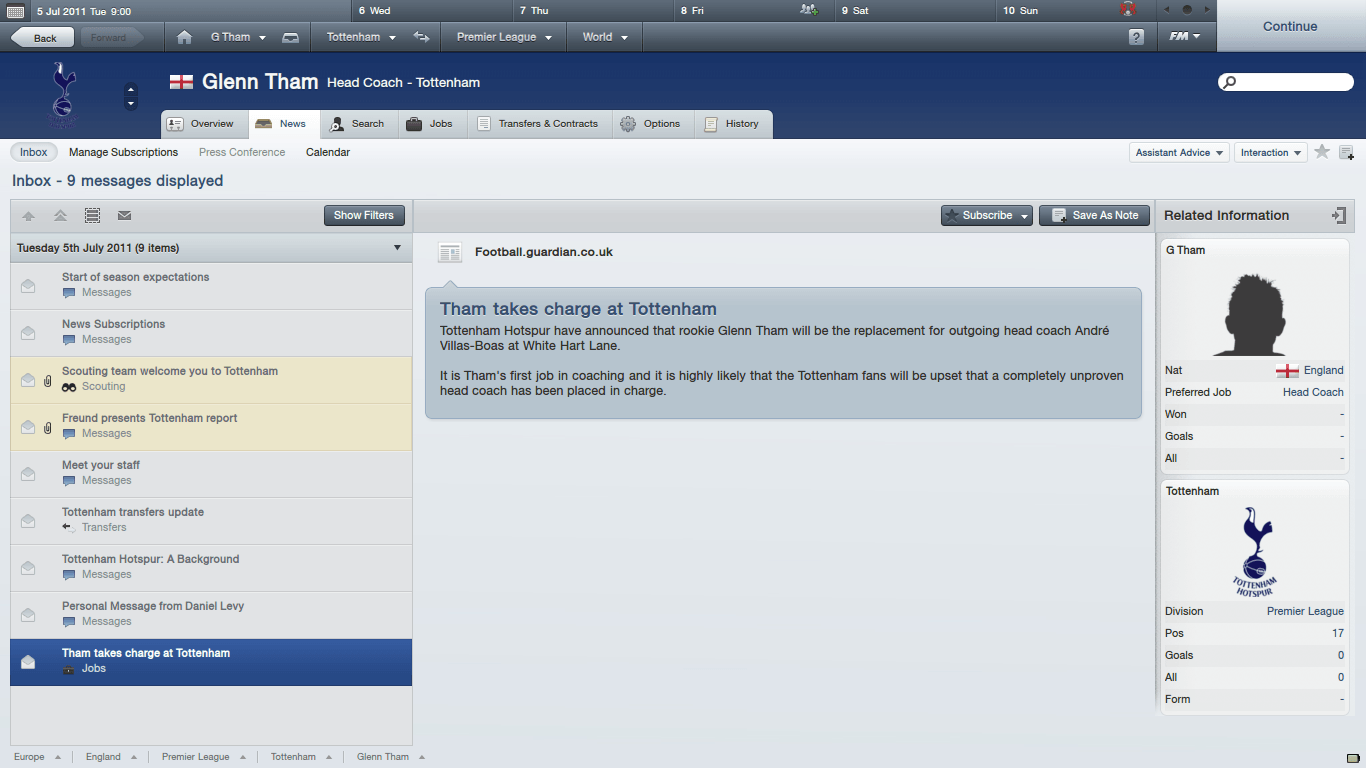 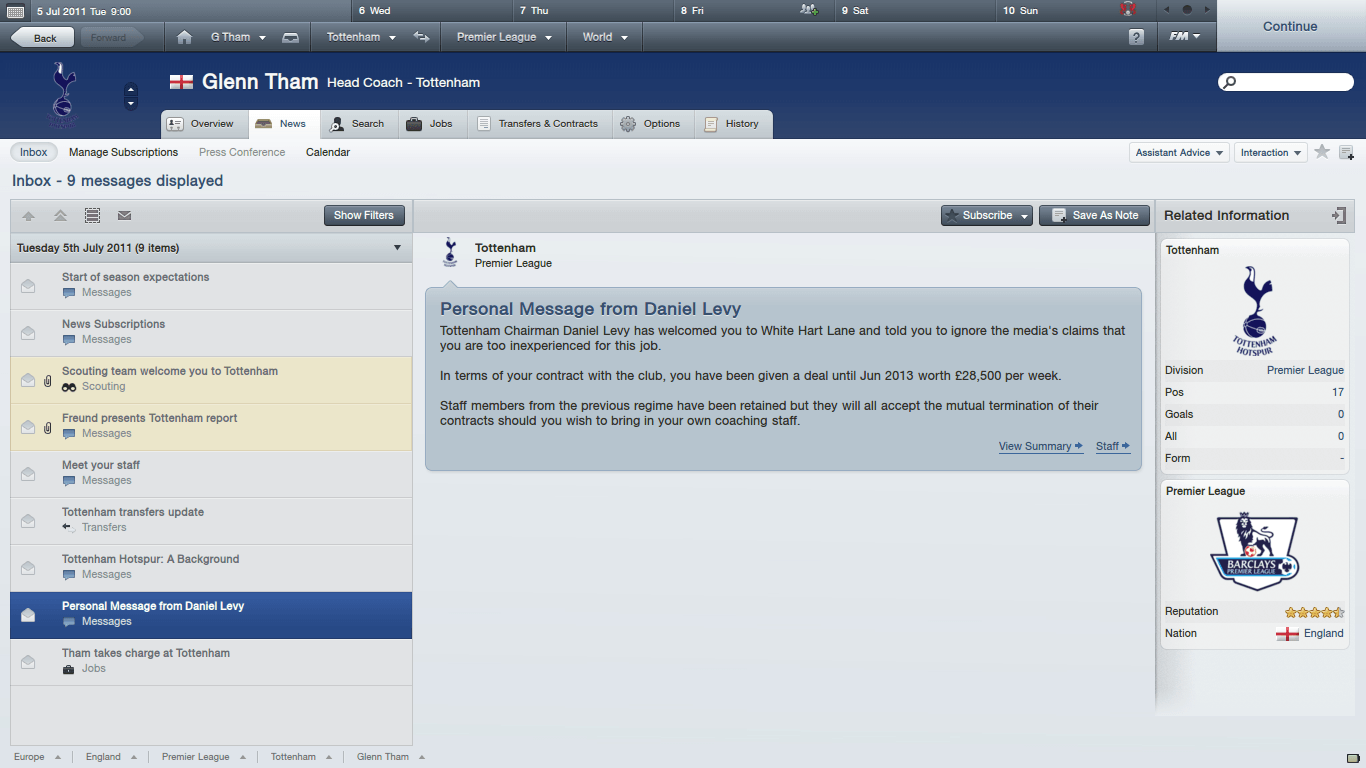 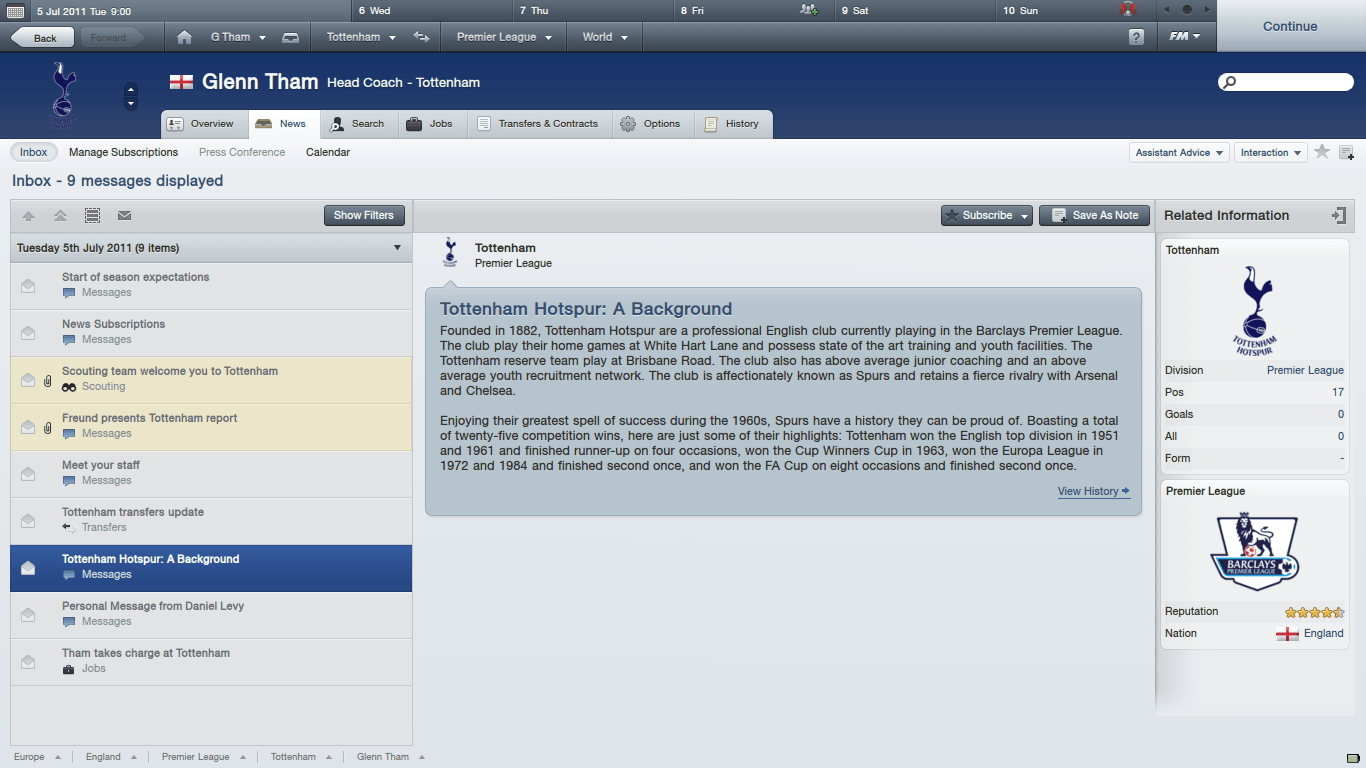 Thus begins my saga to bring the Champions' League, Premier League, and some cups home. 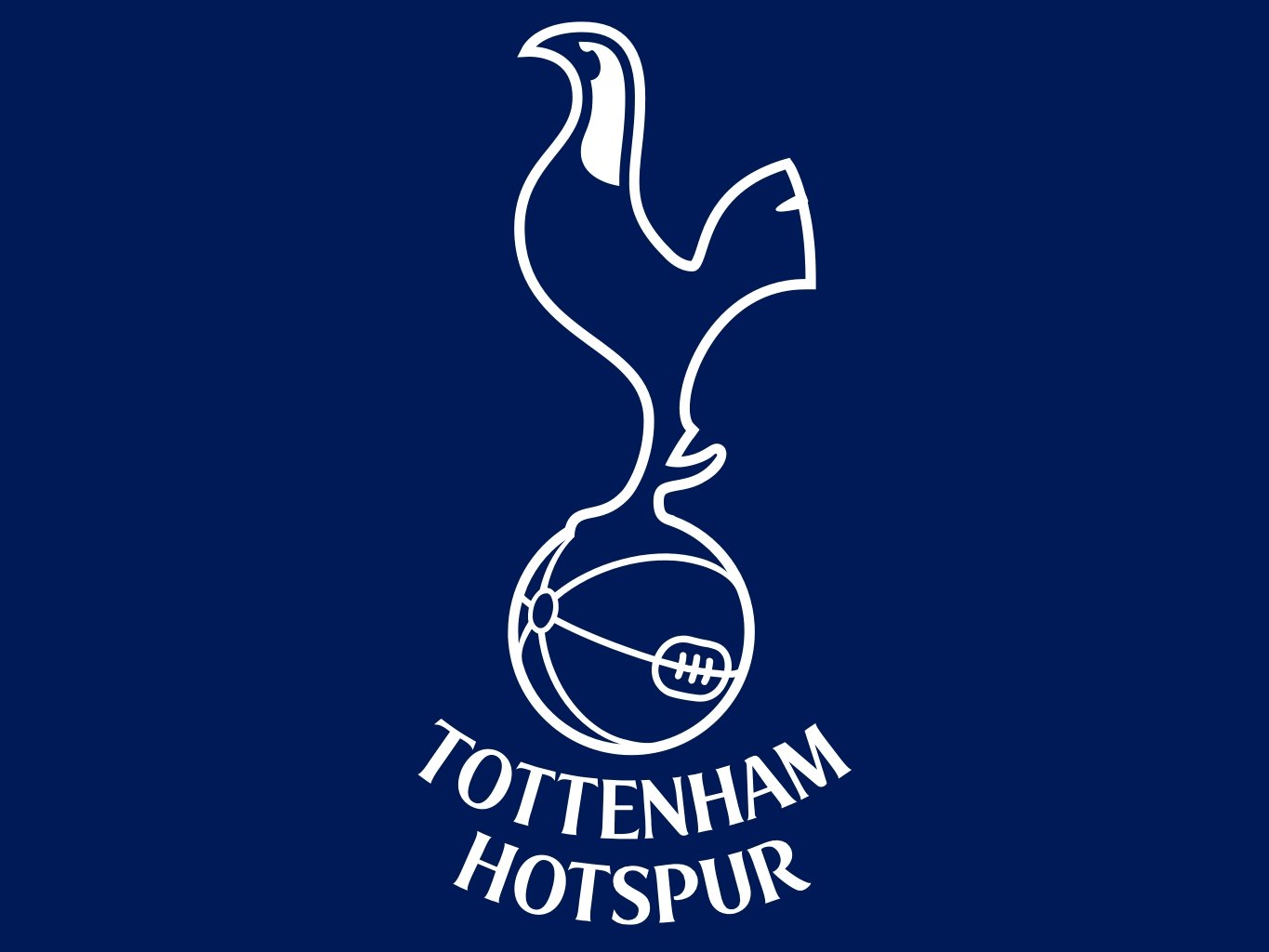 Glenn T
10 years
After having a nice 1-hour-long talk with the board and the chairman this is what we have come up with... 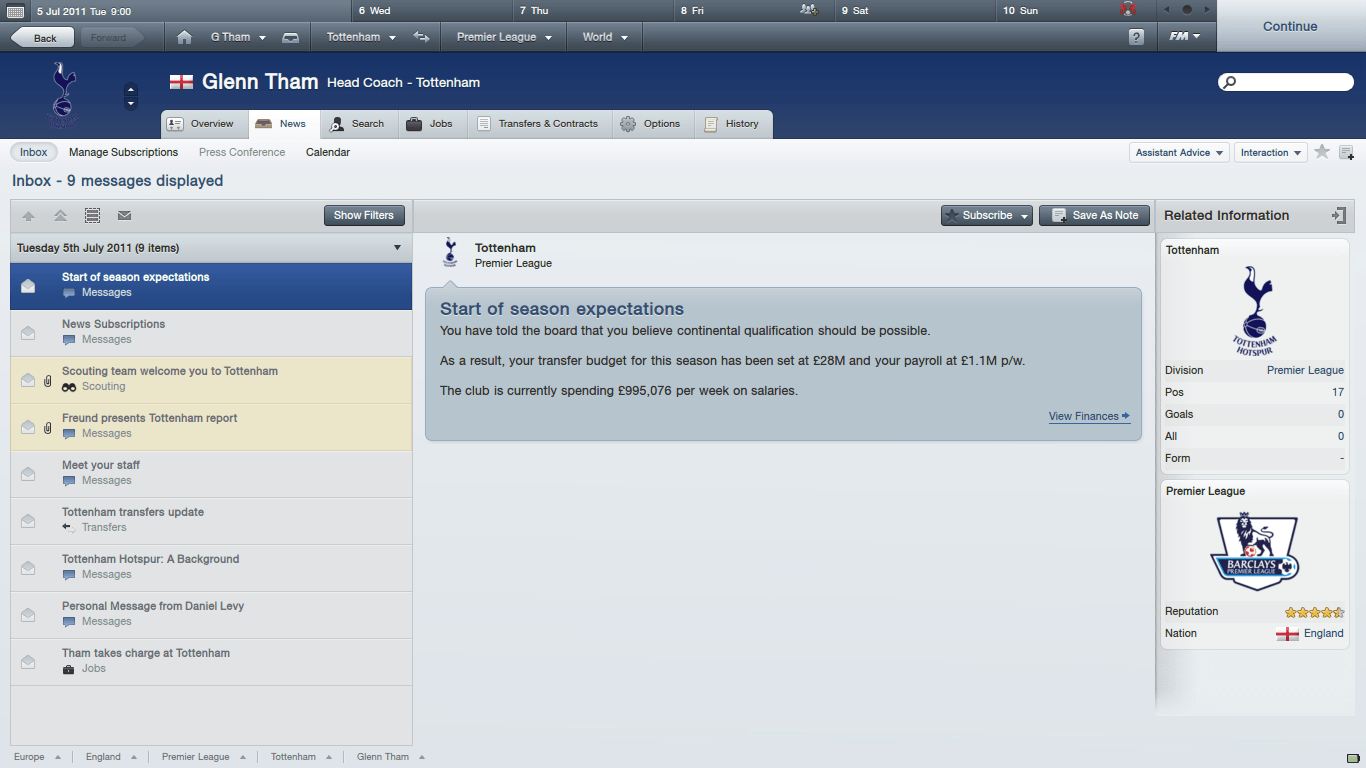 Glenn T
10 years
After thinking for awhile, I used my not-really-that-good tactical prowess to make up these two tactics. 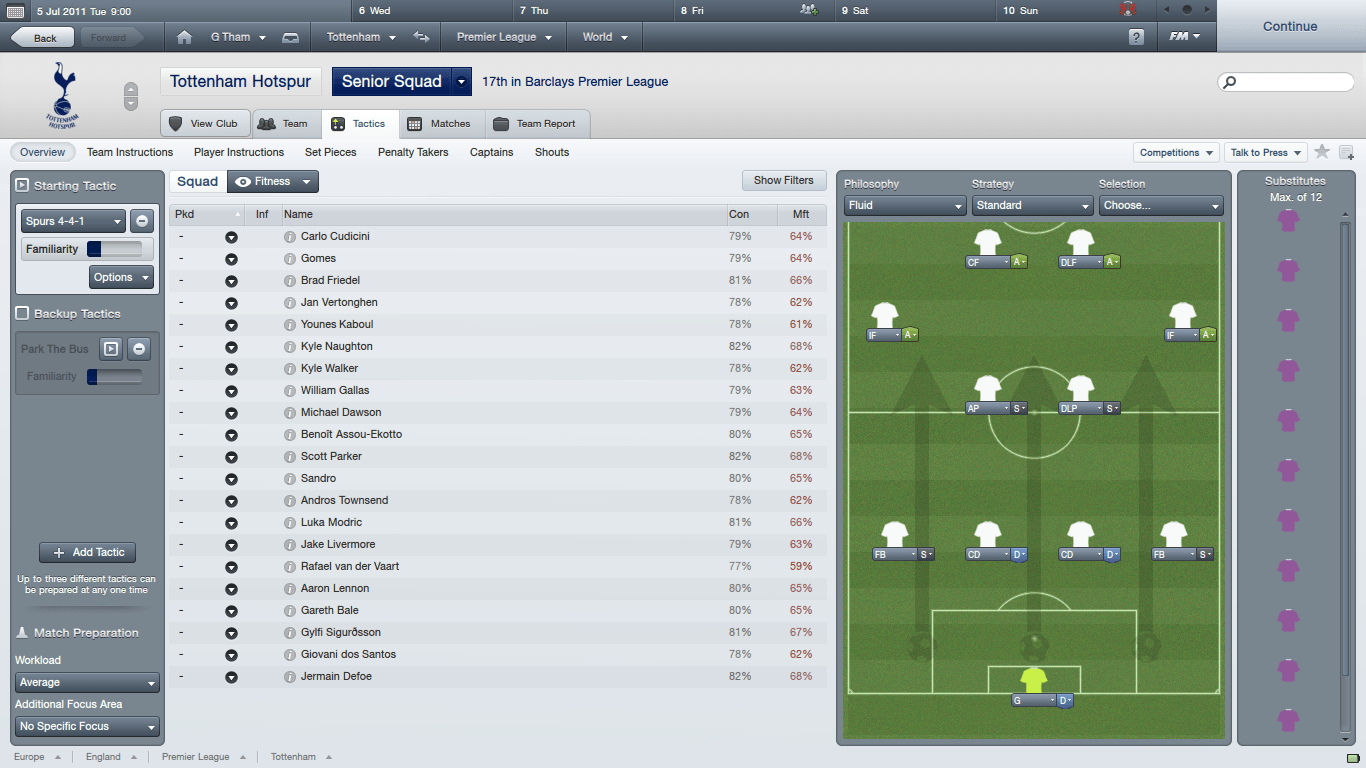 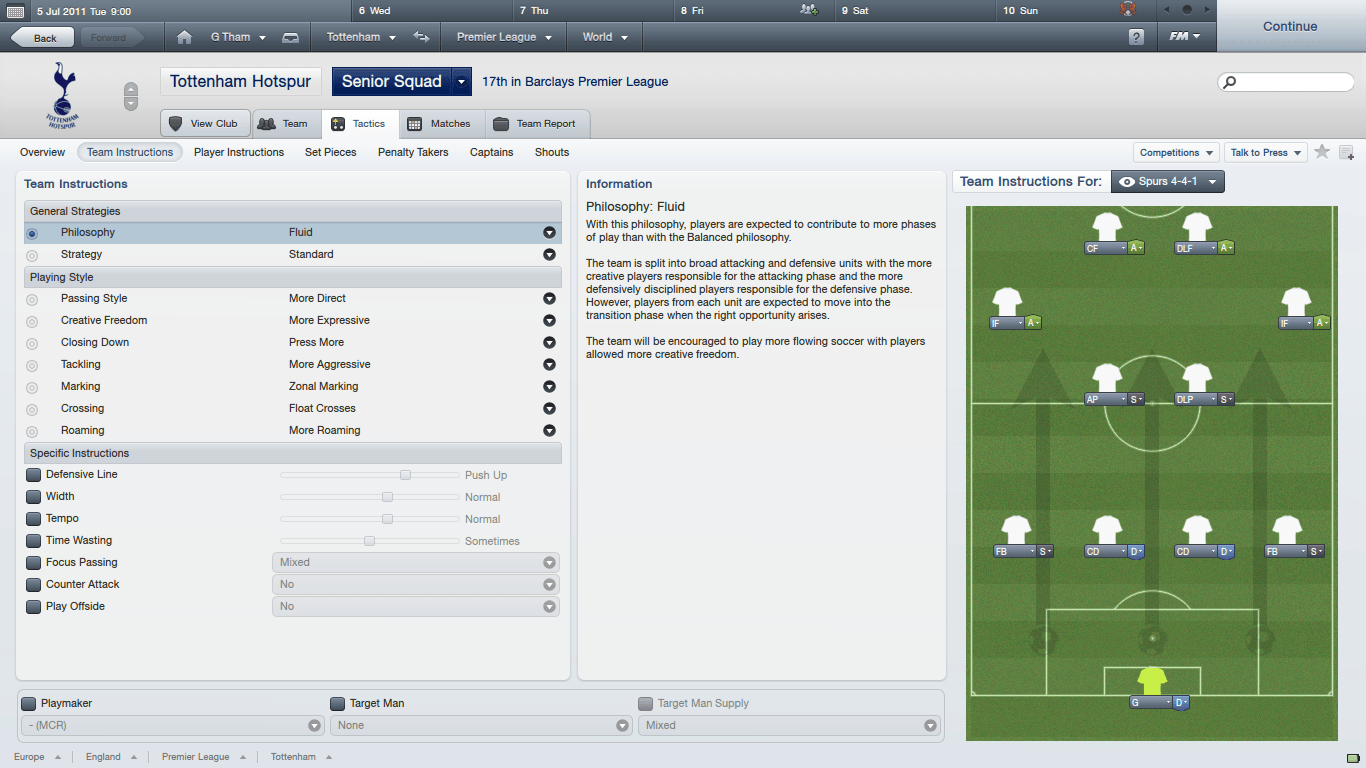 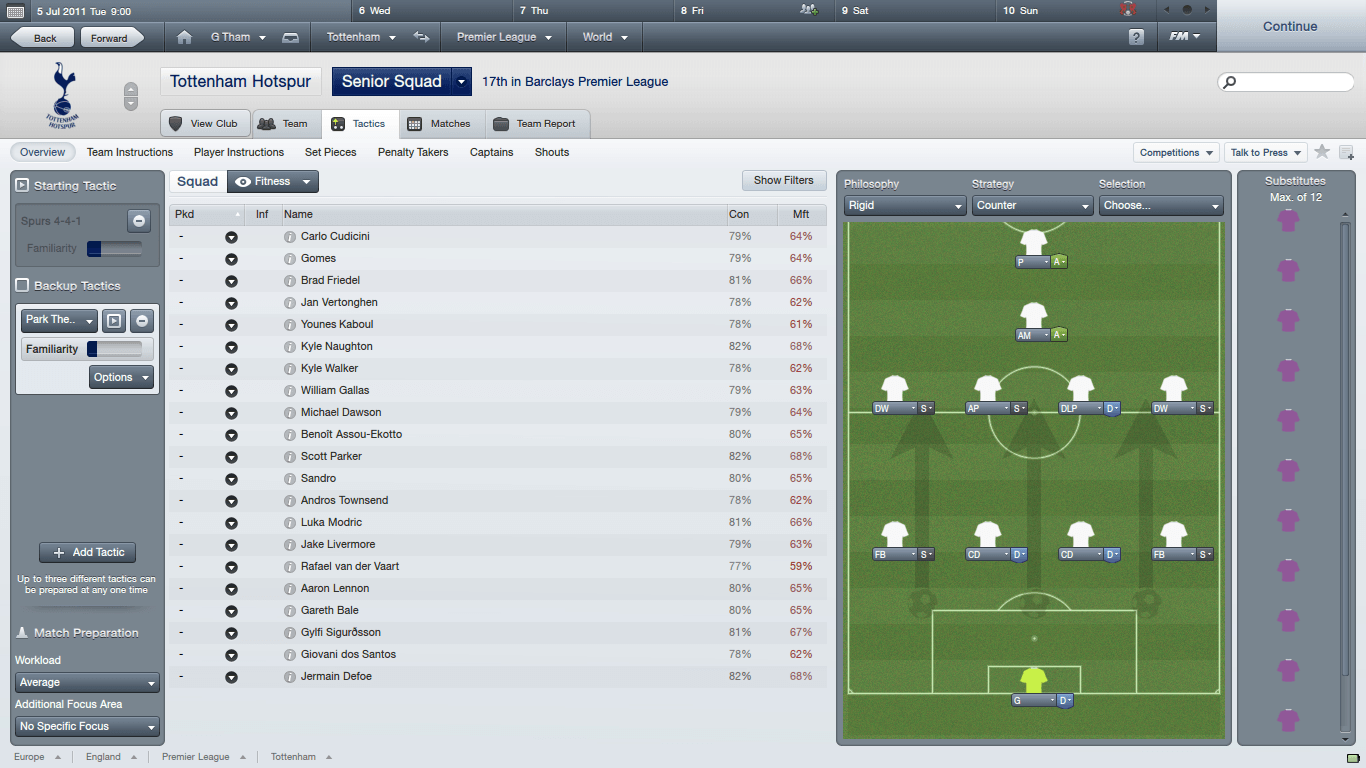 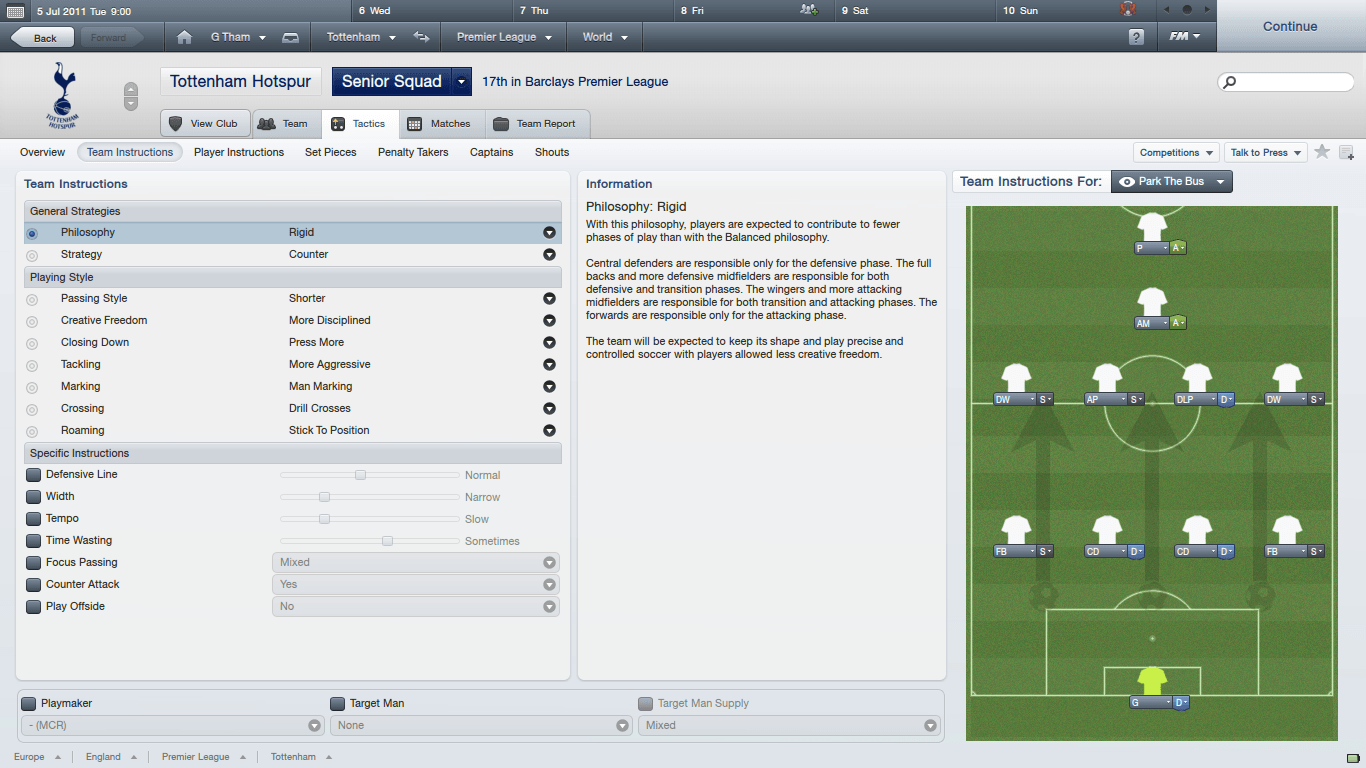 TheKopDiamond
10 years
Good start mate, Very nice signings with Sigurdsson & Vertonghen. hopefully they will do well, how much did you get Sigurdsson for ?
1
Login to Quote

#61344 TheKopDiamond : Good start mate, Very nice signings with Sigurdsson & Vertonghen. hopefully they will do well, how much did you get Sigurdsson for ?

He didn't make those signings. Tottenham have signed them for real. He is using a 2012 update.
Login to Quote

#61345 akash.vidyasagar : #61344 TheKopDiamond :
Good start mate, Very nice signings with Sigurdsson & Vertonghen. hopefully they will do well, how much did you get Sigurdsson for ?


He didn't make those signings. Tottenham have signed them for real. He is using a 2012 update.

Yeah, i realised when i hit reply lol
Login to Quote

Glenn T
10 years
After analysis of the squad that I inherited from Villas-Boas, or Harry Redknapp because AVB quit after only two weeks, I have come to the conclusion we have a very strong midfield.

Key players
Luka Modric - The vice-captain of the Spurs squad and our best midfielder. 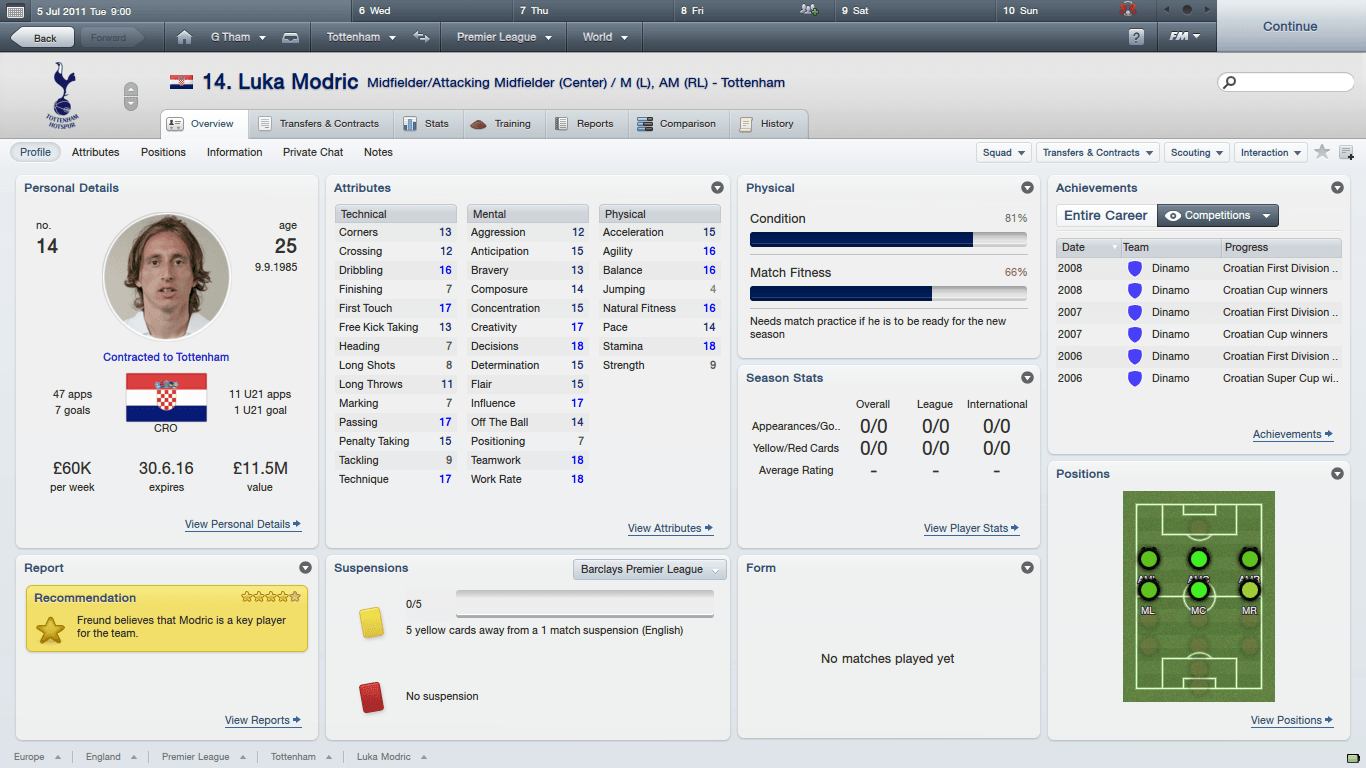 Rafael van der Vaart - The Dutch midfielder's skill & experience will be vital for our season. 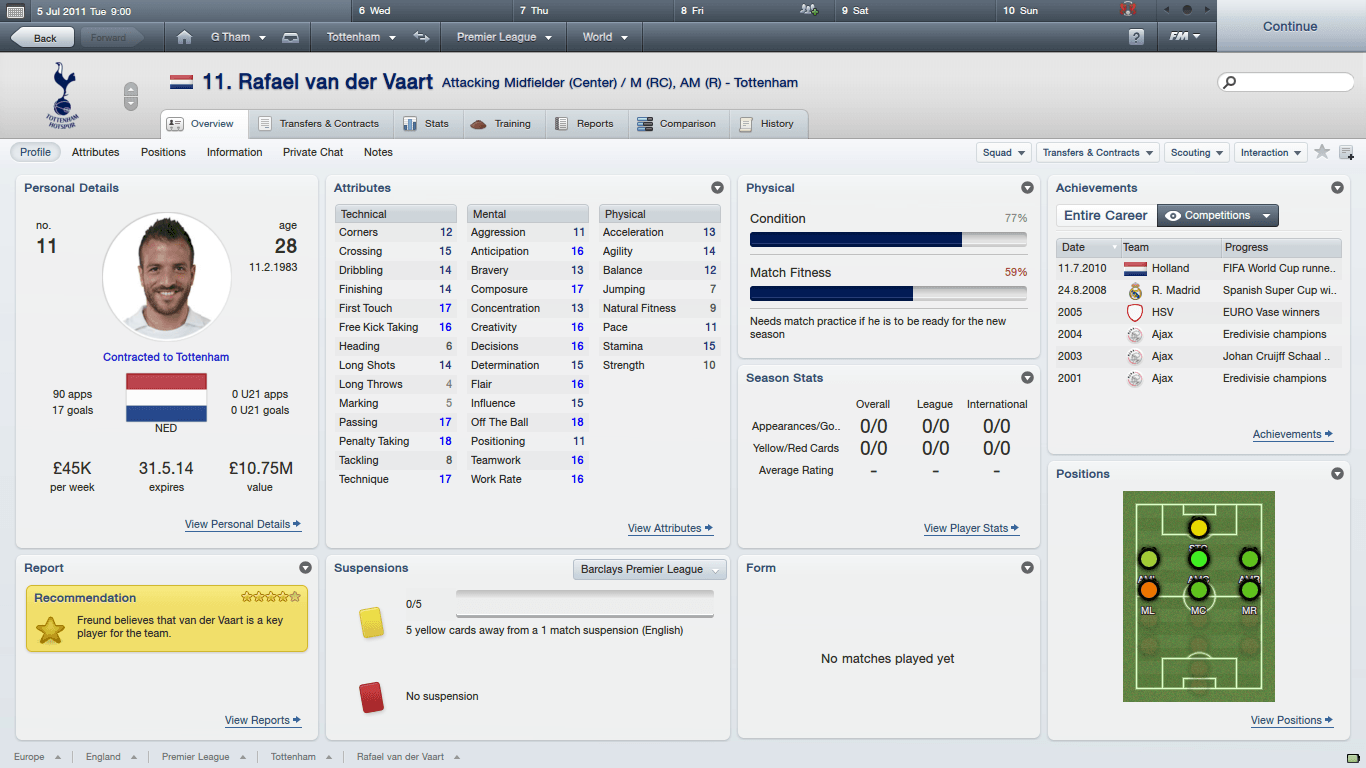 Gareth Bale - We have a treasure in Gareth Bale! The winger can play anywhere on the left and is already a star at 21. 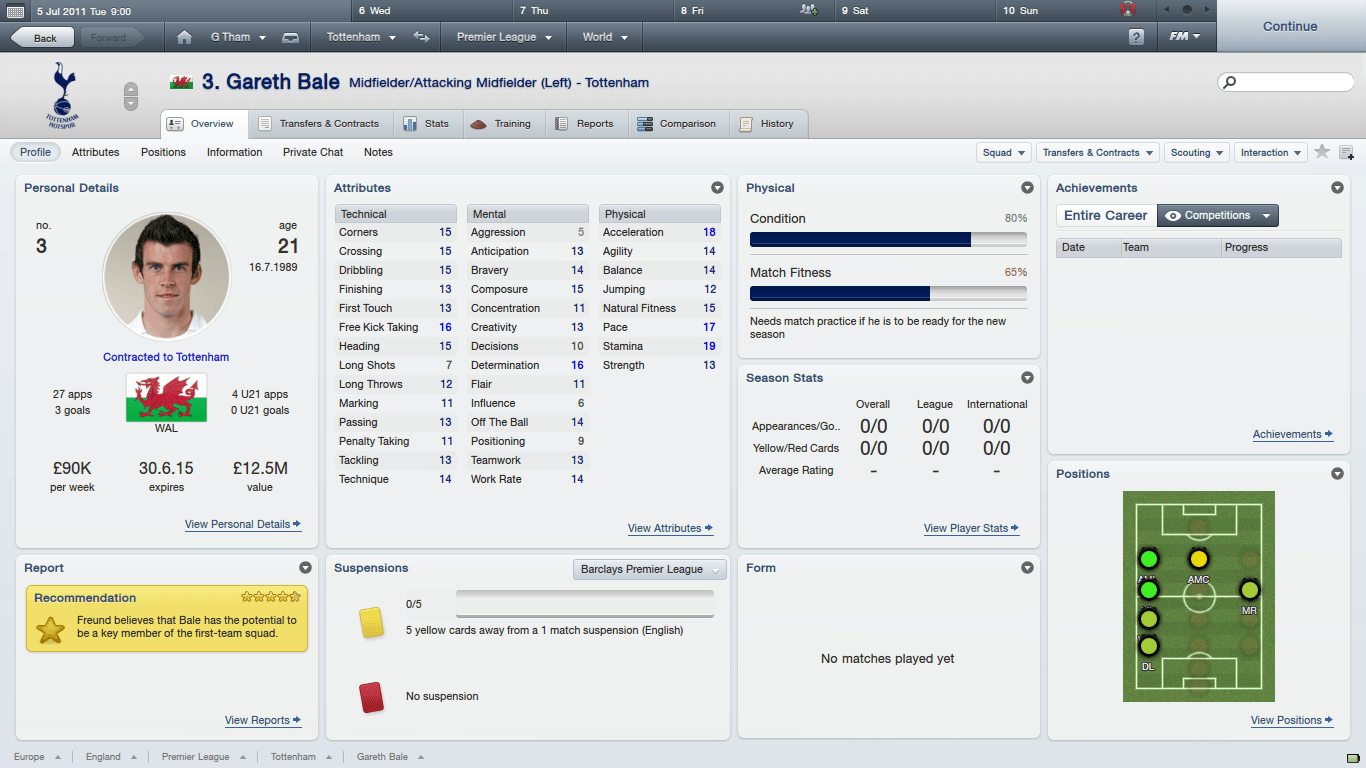 Gylfi Sigurdsson - One of two transfers AVB arranged in his short time at the club. Already looking very strong and it will be a pleasure to see him strut his stuff in a Spurs jersey. 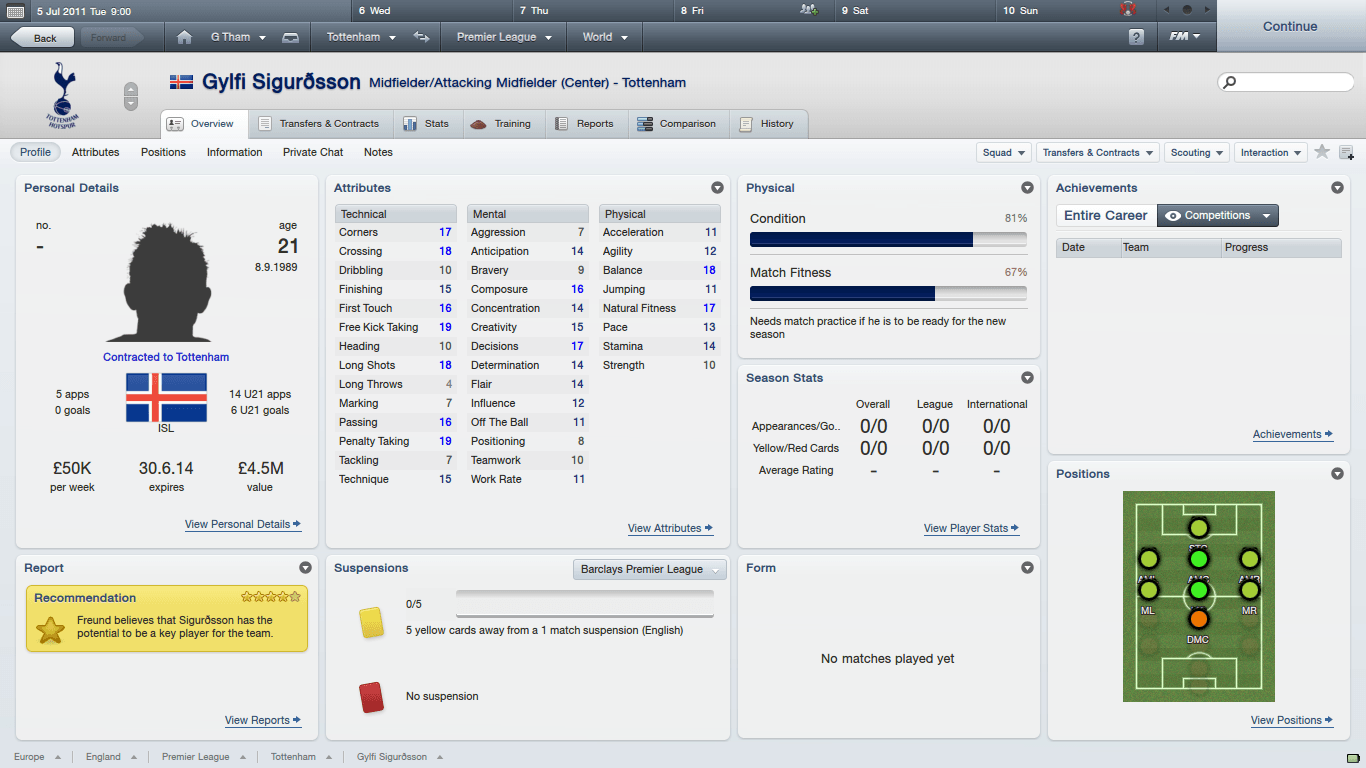 Especially to see how you do against the giants in Europe

Glenn T
10 years
It's only my first day at Spurs but I have already done a heck lot and I can say I am not done yet. I also let some of the players know why I was the "scary but respected" coach at Stoke. 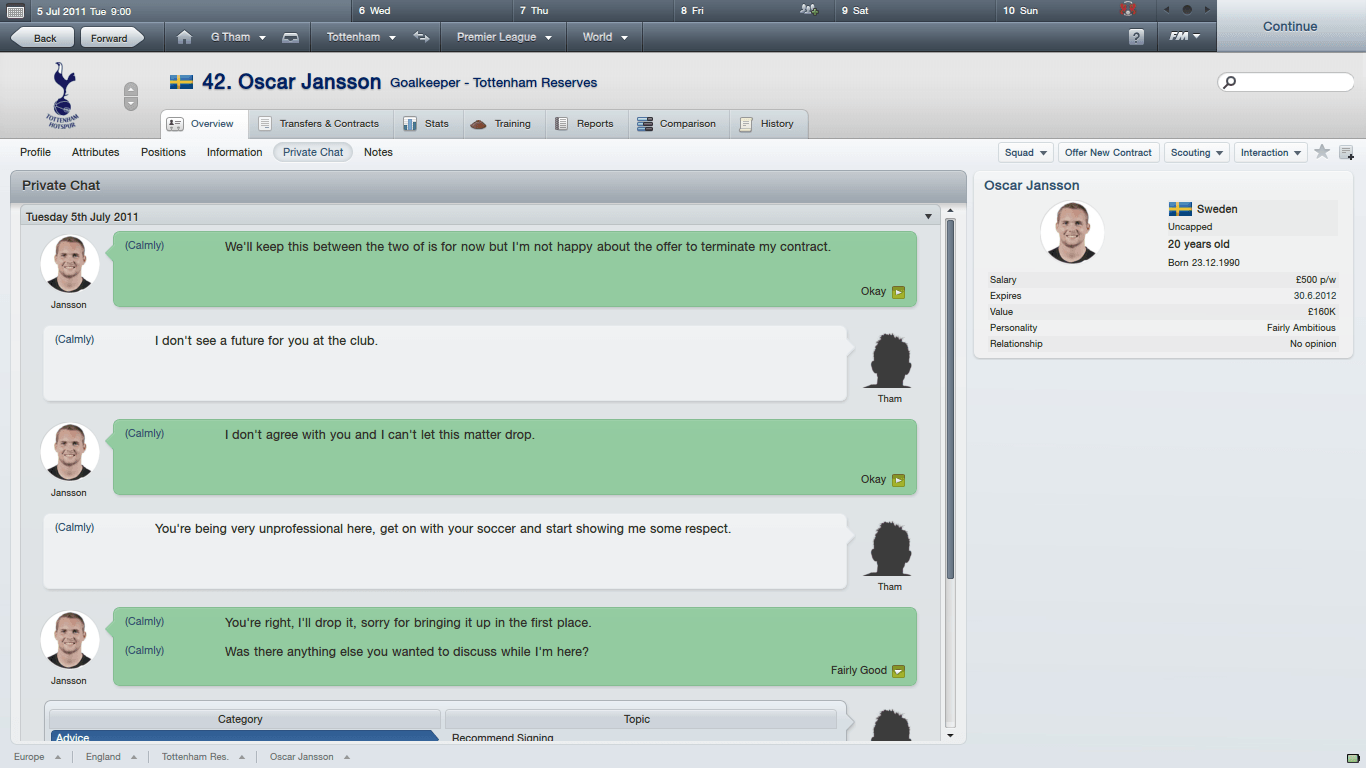 Darsh_SS
10 years
Which strikers are you going to buy?
For your 4-2-4 you will probably need 4 strikers, and if you have the current squad then no Adebayor, just Defoe right?
Login to Quote

its me
10 years
with the quality in your midfield i would suggest that you play with 5 in the middle instead of only 2 .
Login to Quote

#61359 its me : with the quality in your midfield i would suggest that you play with 5 in the middle instead of only 2 .

Yes, I'm still a little unsure over my tactics.
Login to Quote