gizzydrop
10 years
letting go of modric and or bale is badddd....baton down the hatches and sit tight, amigo
Login to Quote

Glenn T
10 years
August
It has been a really bad start to the season and my reign as Tottenham manager. 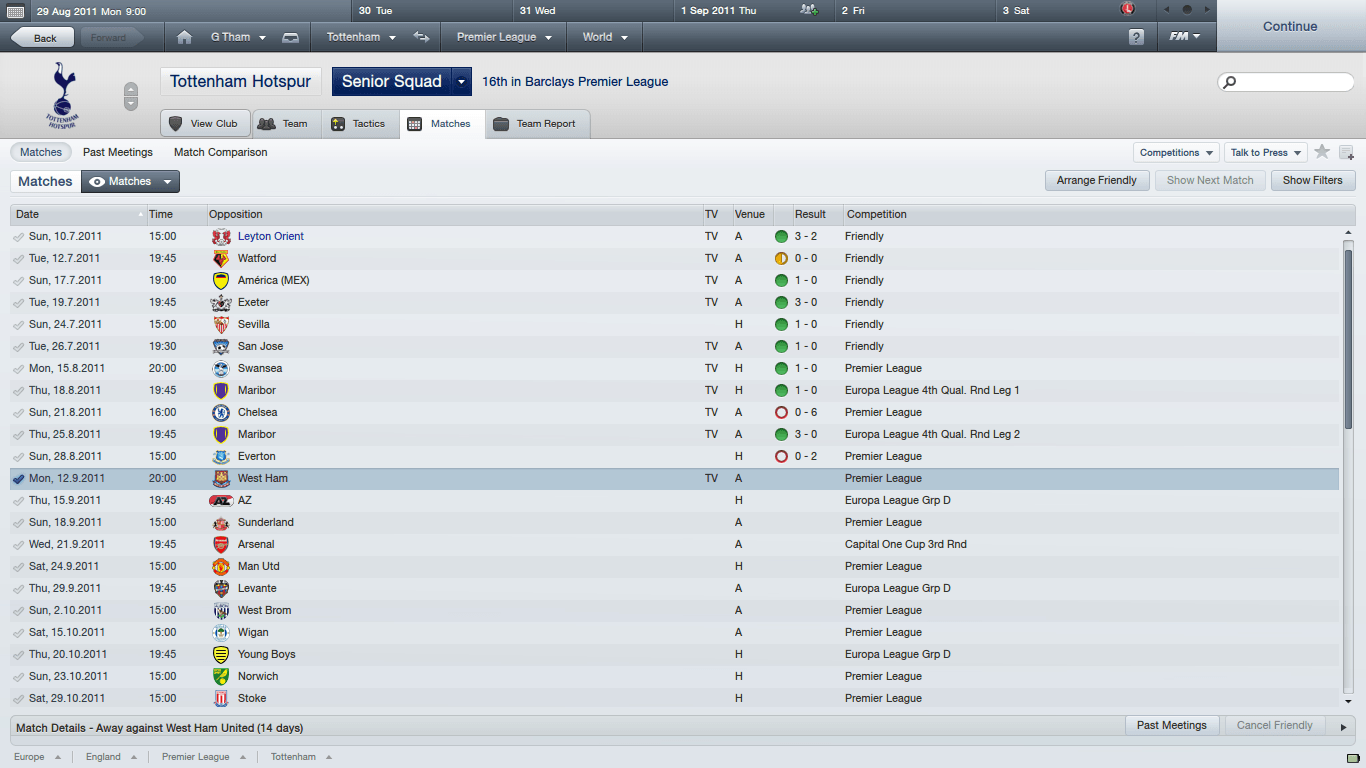 There's a feeling of I-told-you-so going on among the fans especially with Chelsea's 6-0 thrashing of us, and the 2-0 loss against Everton, a game we really should have won. Anyhow on a positive side we have three points from a rather narrow 1-0 win against Swansea and also we're in the Europa League group stages with wins in both legs against Maribor. 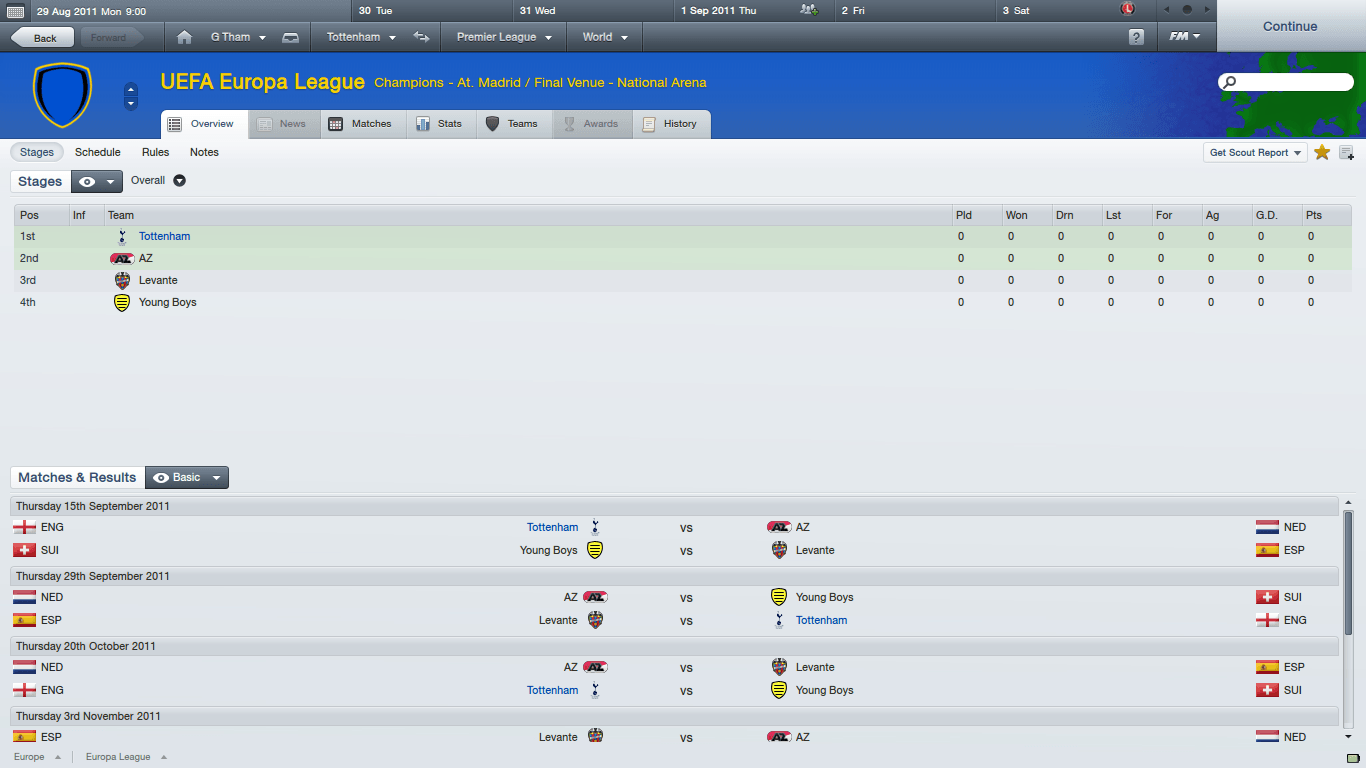 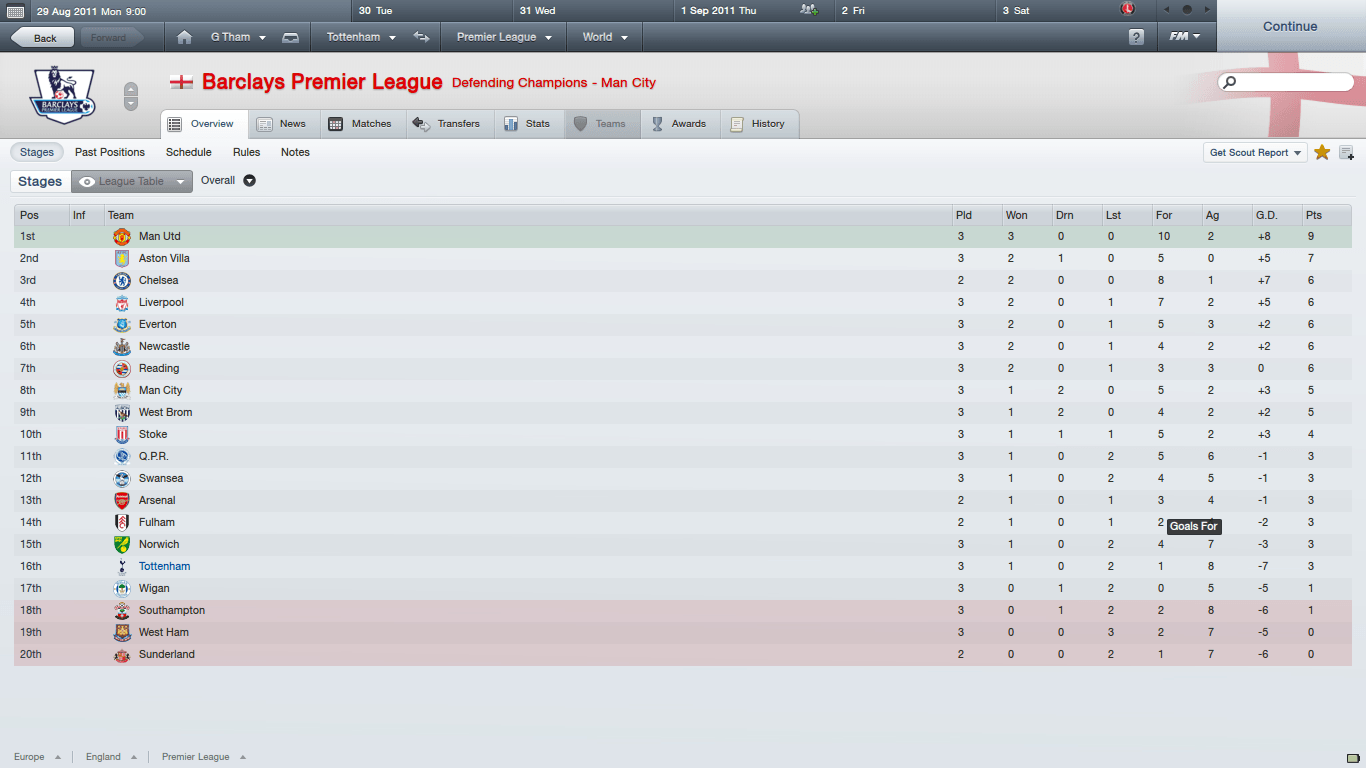 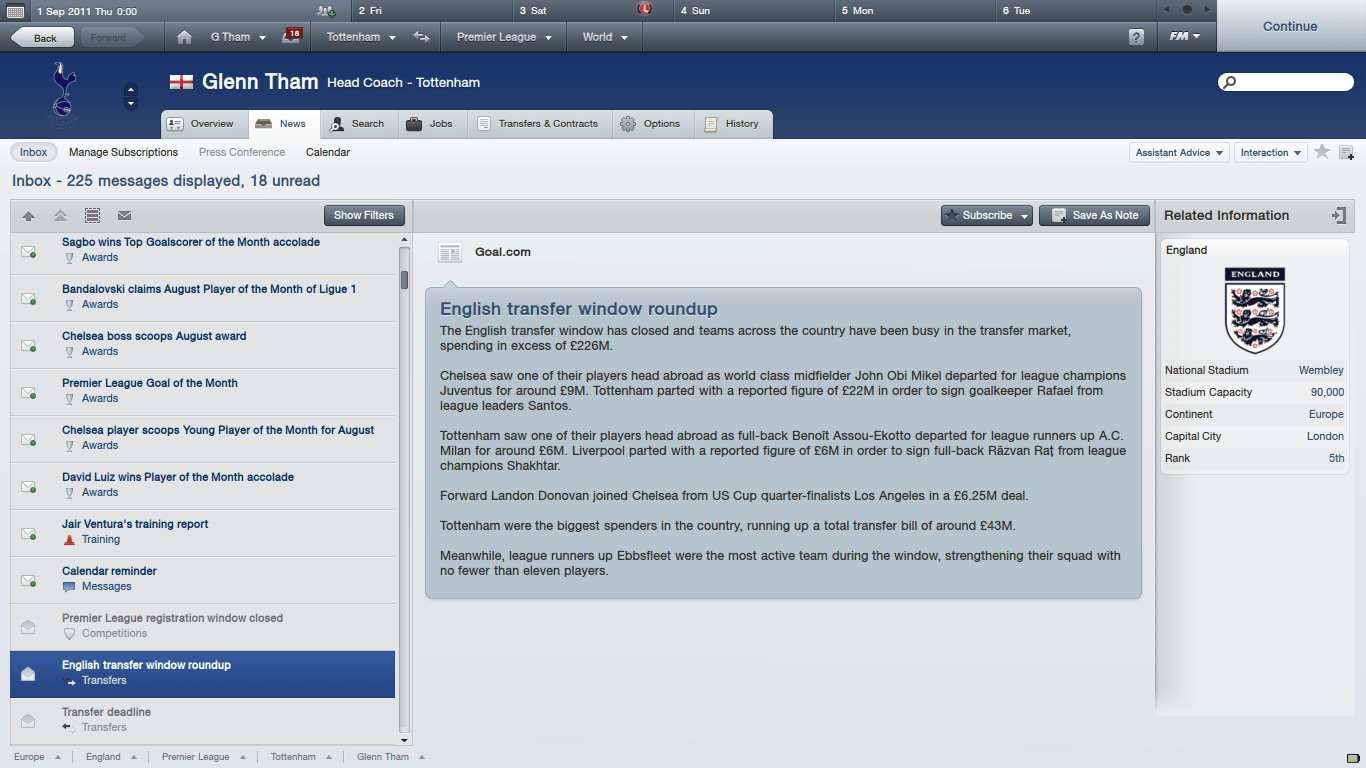 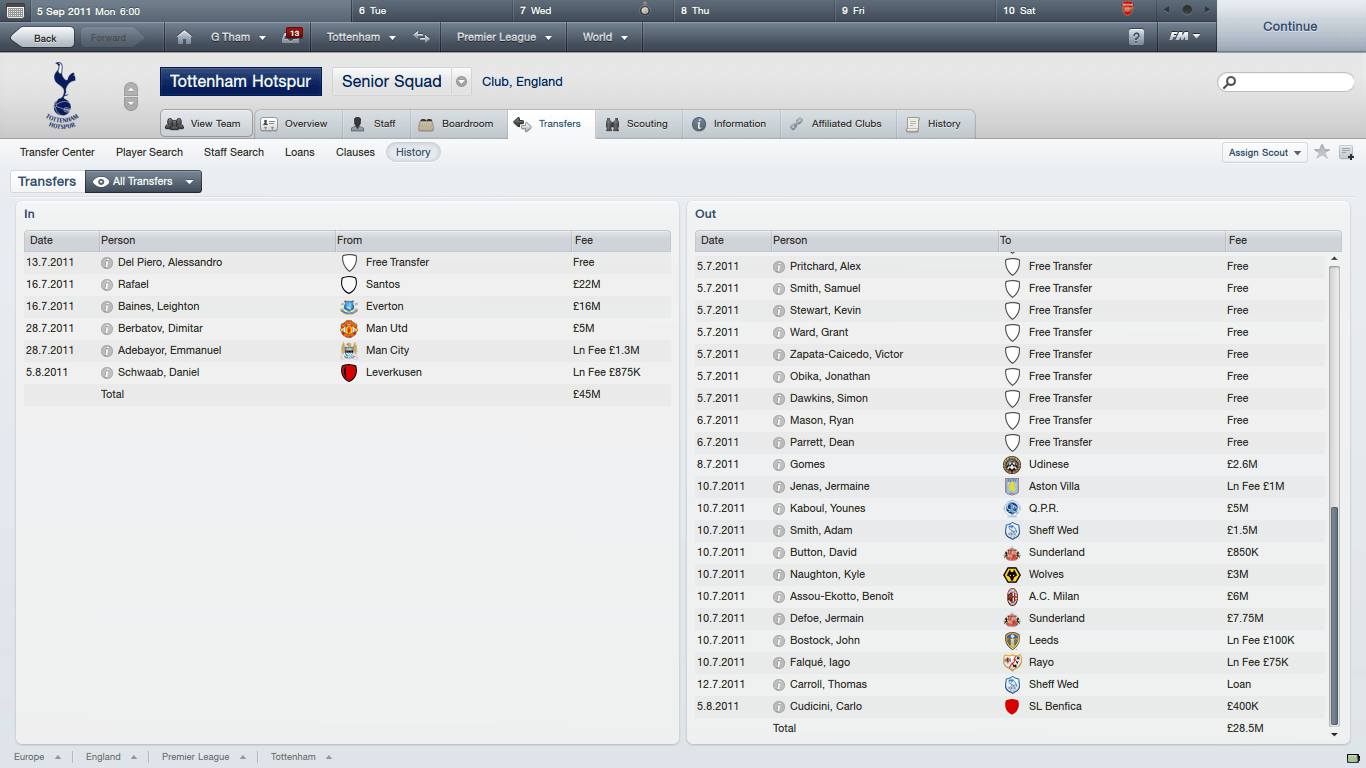 The board's ruling so far in my reign as manager... Fair enough.

The majority of my backroom staff has also been cleared out and replaced with better and more competent ones. 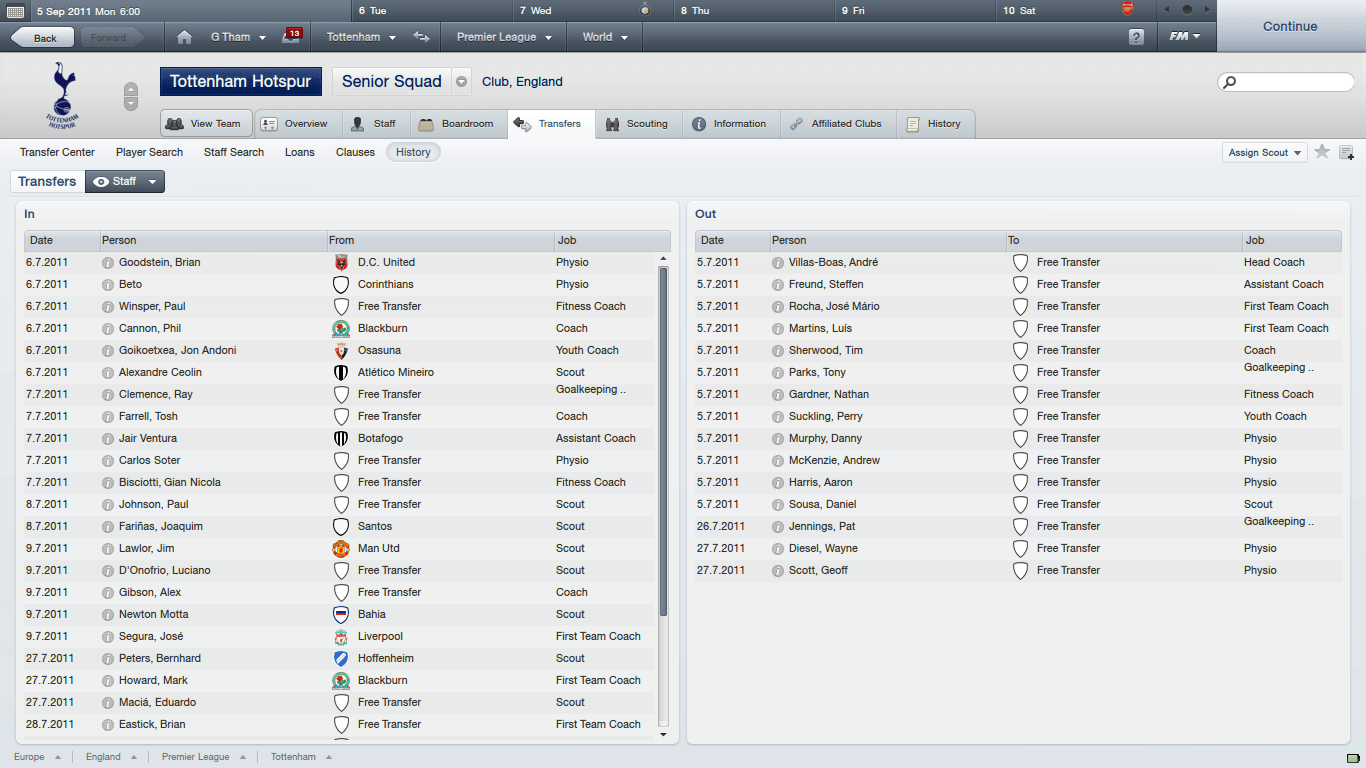 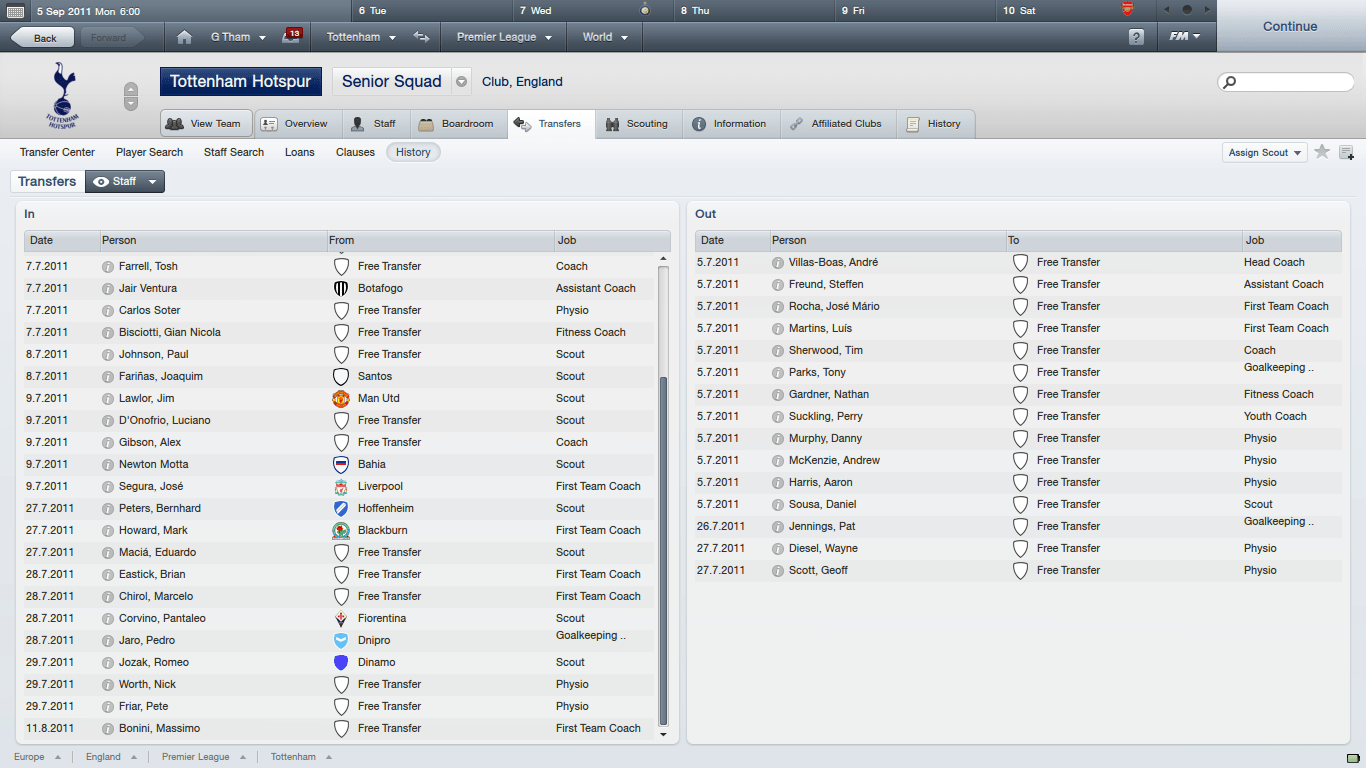 Glenn T
10 years
We stormed to a 7-0 win against Sunderland, with Emmanuel Adebayor being the hero and scoring a hat trick. 3/4 of the Team of the Week are Spurs players! 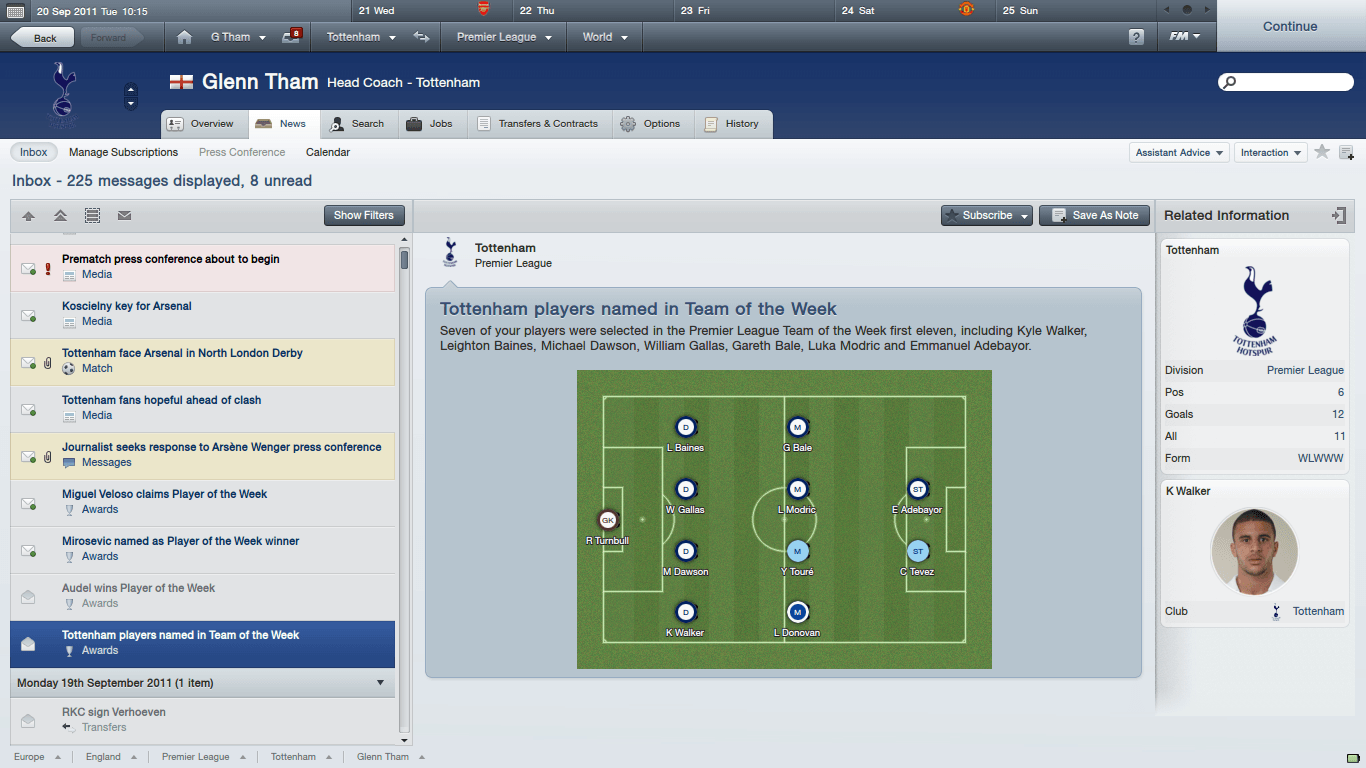 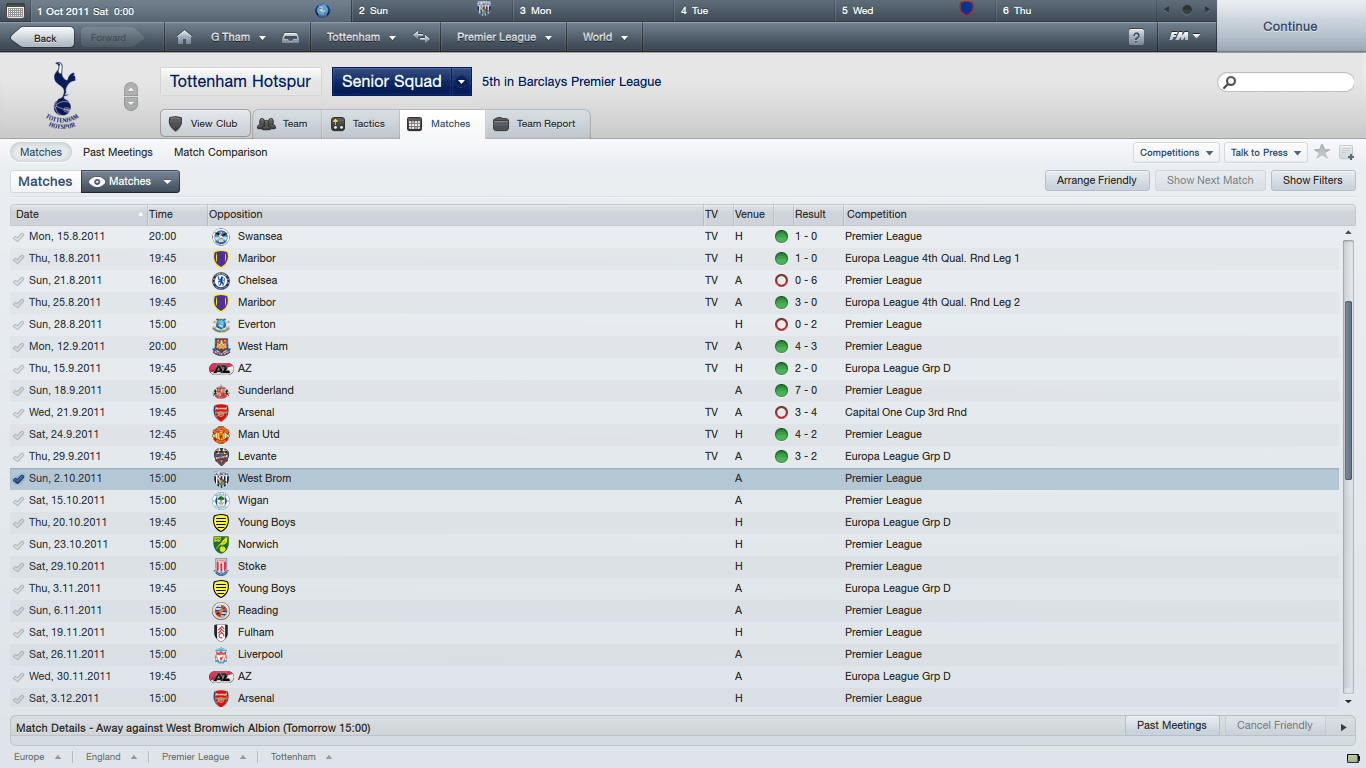 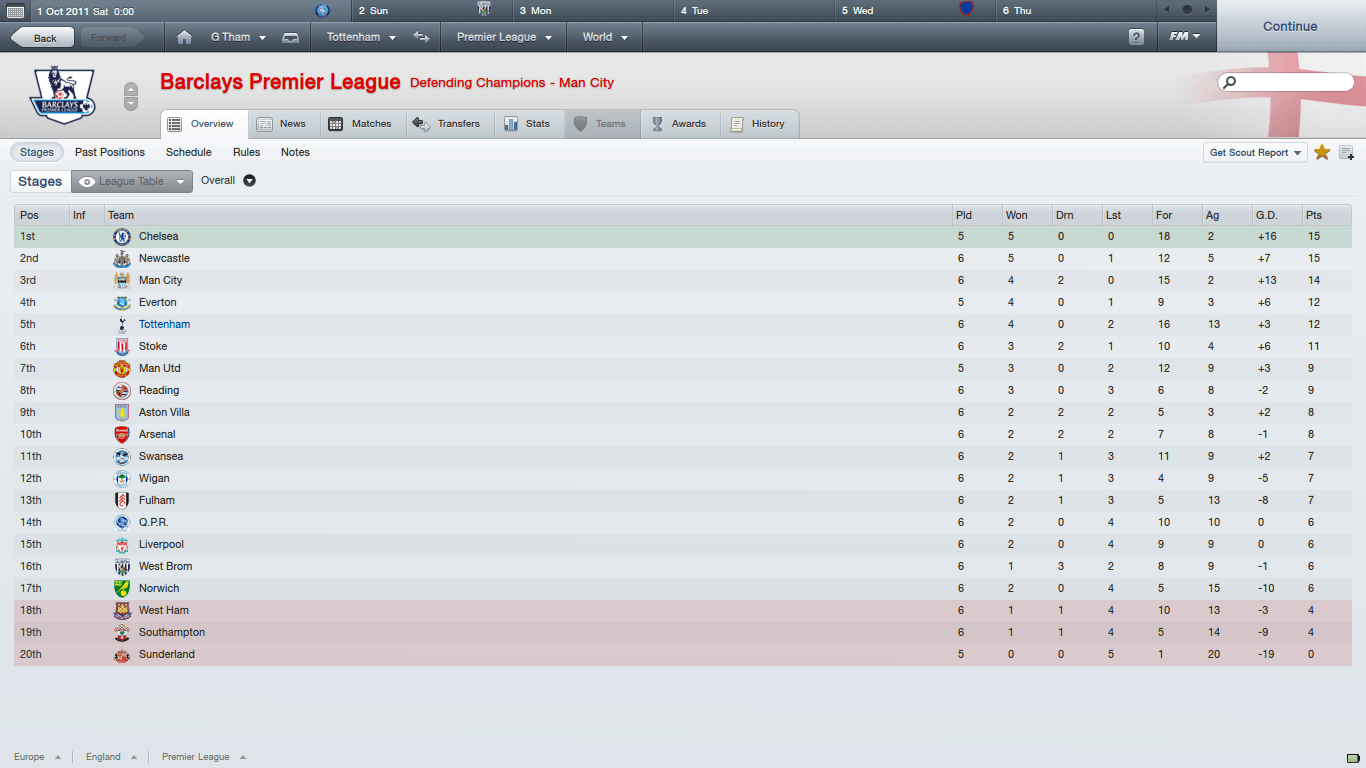 The only blemish is the 4-3 loss to Arsenal in the Capital One Cup in the Third Round, so we are effectively kicked out of the competition and any hopes of us winning a trophy this season will rest on the FA Cup and the Europa League - I think the Premier League is too out of reach for us at the moment.

Emmanuel Adebayor has been a star for Spurs so far I am considering getting him permanently but his wages are just too astronomical so that might be a problem. Anyhow, he has scored 8 goals in 5 appearances, a very impressive tally.
Login to Quote 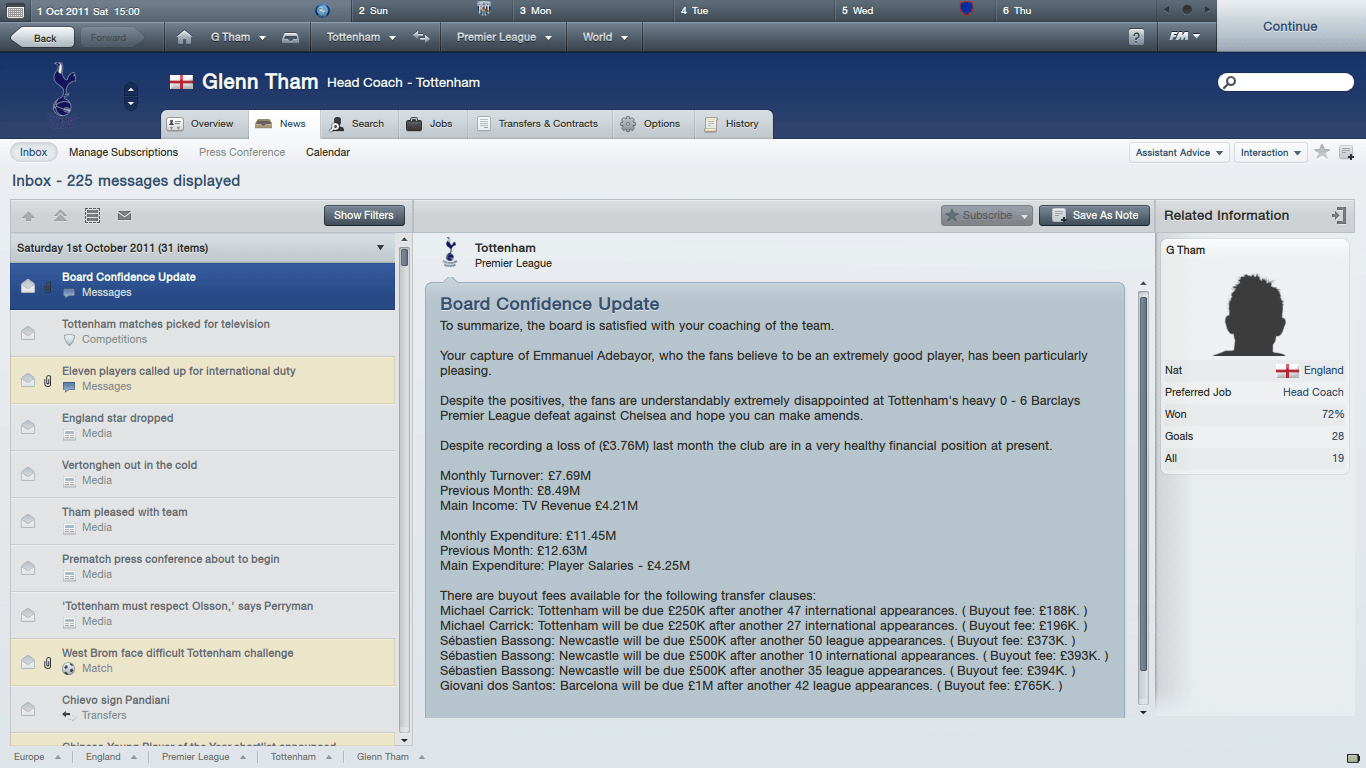 Glenn T
10 years
They call me "unstuck"... I call bullshit 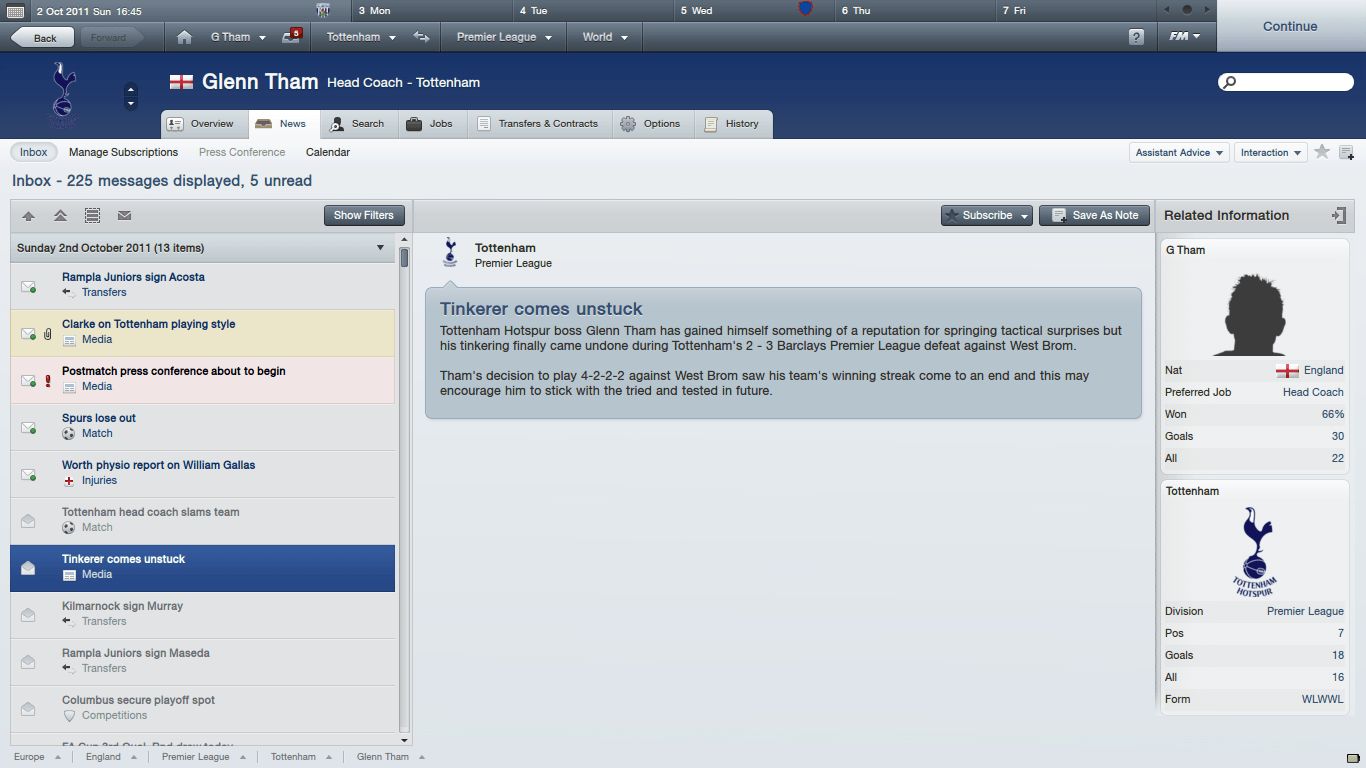 Glenn T
10 years
October
Results for the month could have been improved. 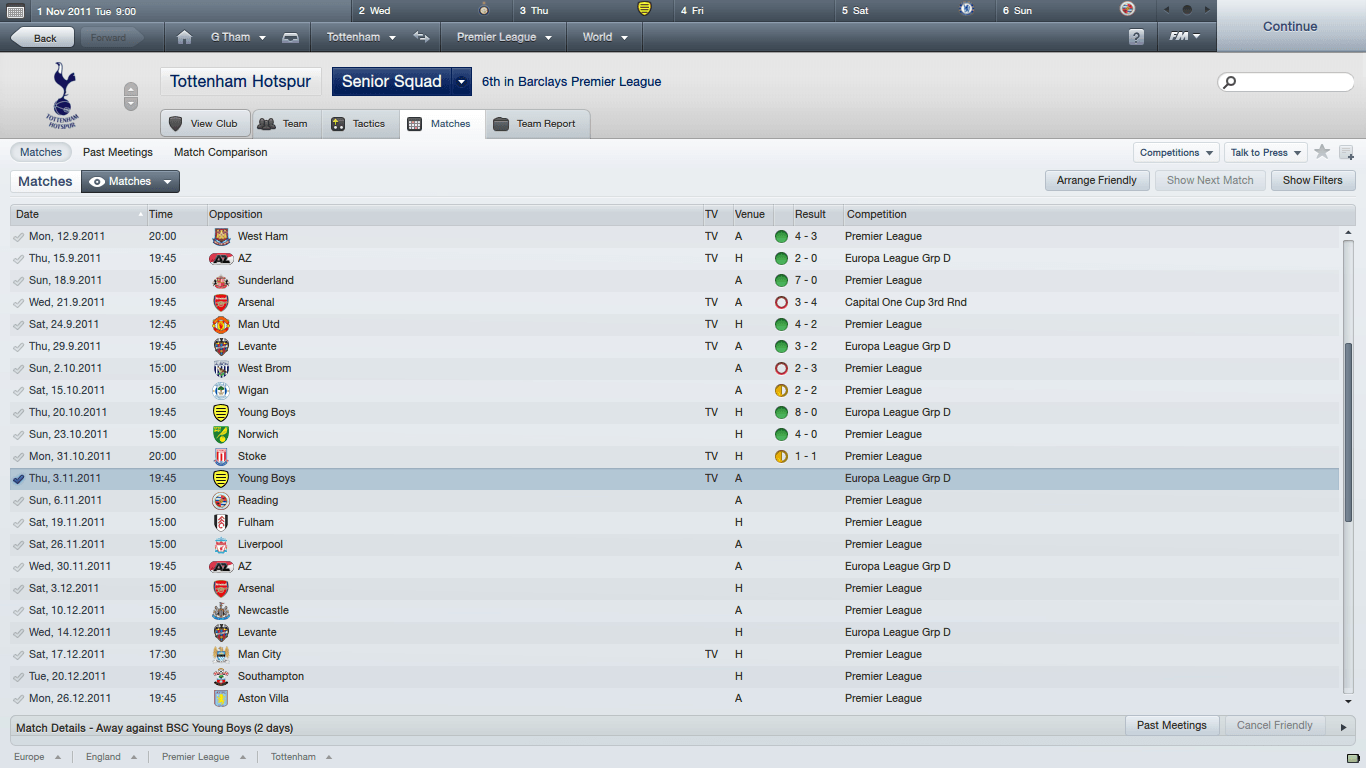 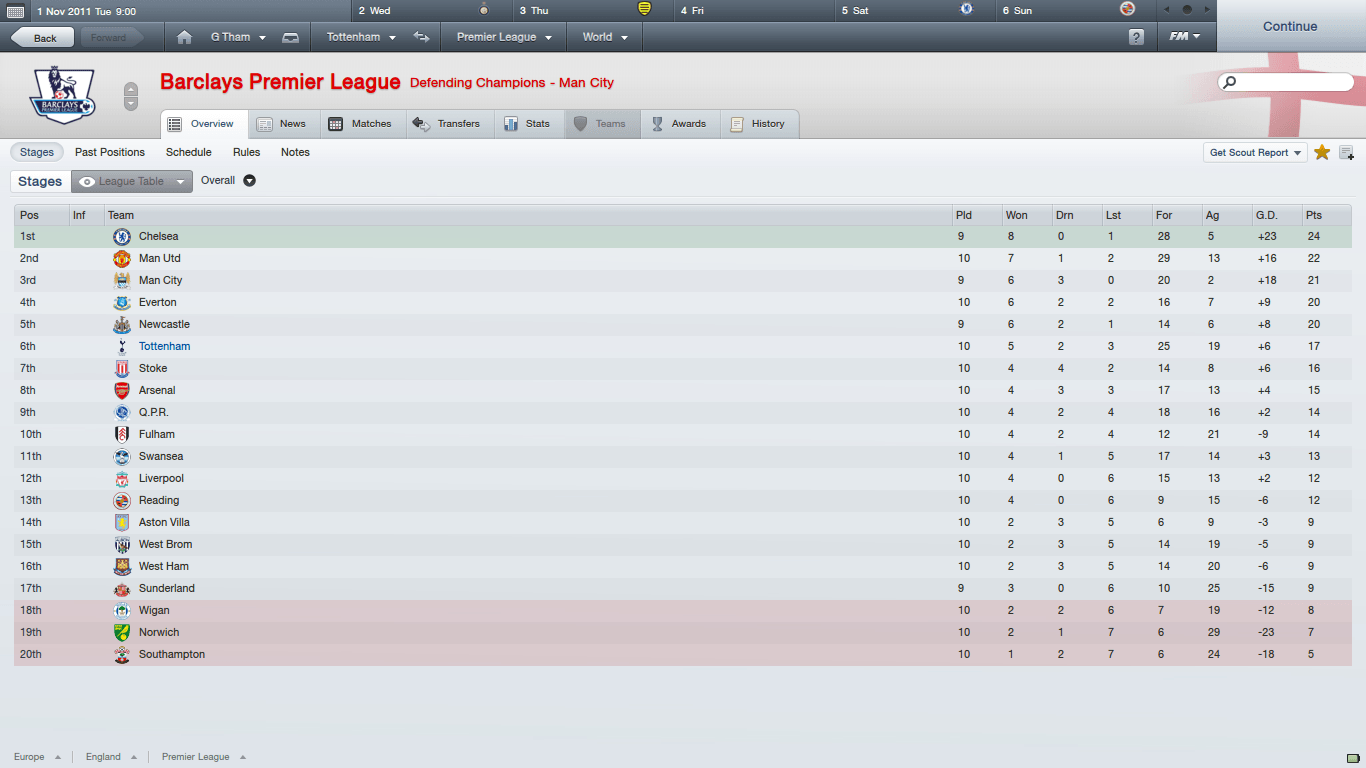 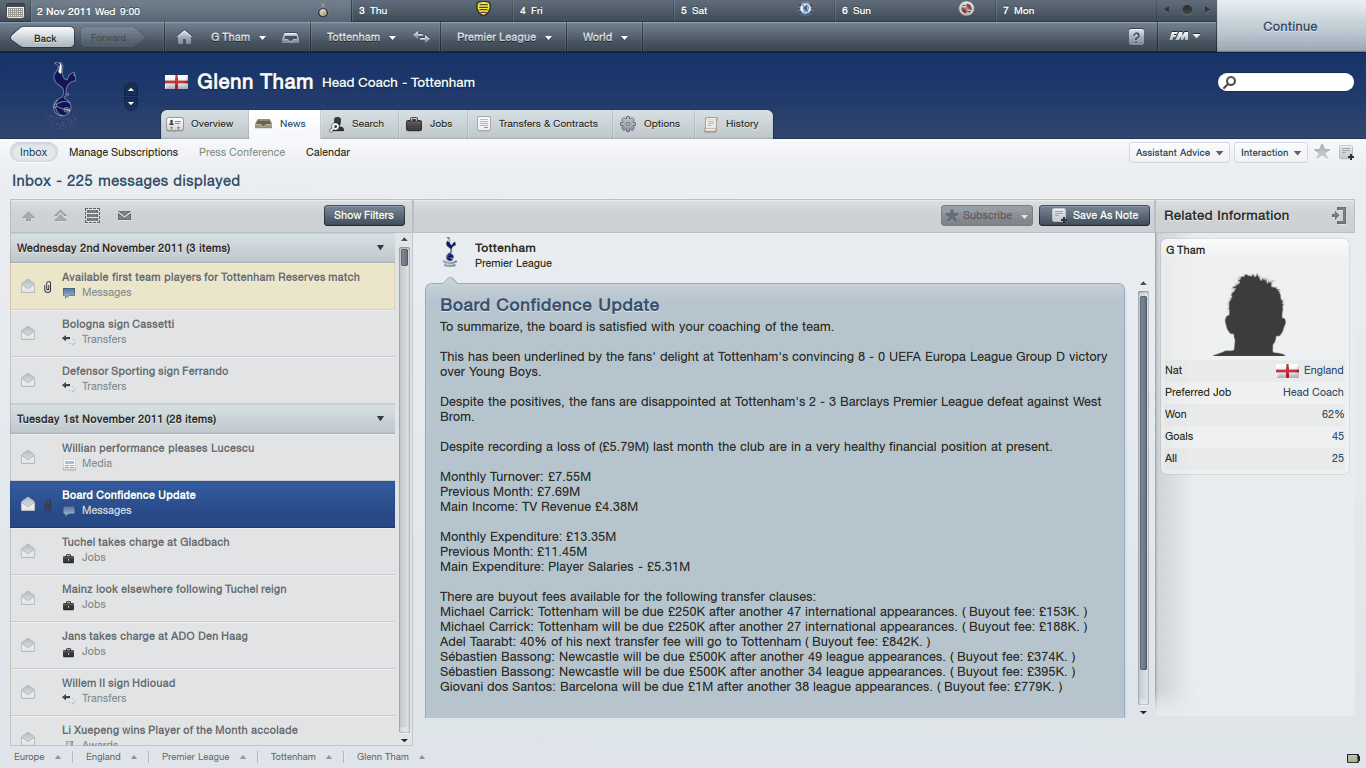 Overall, to be fair I think it has been an okay month with the highlight of October definitely being the 8-0 win against Young Boys, with Dimitar Berbatov scoring one of the eight goals and Emmanuel Adebayor scoring seven. The problem with Adebayor is that he is a tad bit inconsistent, as he can score ten goals in one game for you and play shite in the next game and the game after next, then recover his form again for about one or two matches.

Anyway, among my first few signings for Tottenham, as you can guess, Berbatov and Adebayor stands out the most. Leighton Baines and Alessandro Del Piero has not been getting enough games lately but when you do play them they produce, which is the same with my German loanee for this season Daniel Schwaab. Rafael has been getting more first-team games than Brad Friedel lately but the coaches are still very sure that Friedel is still better than Rafael. The Brazilian keeper might have ousted Friedel as first-choice keeper because of my faith in him, but if his already-rather-average form starts to dip, I'm definitely recalling Friedel.
Login to Quote

Glenn T
10 years
Spurs have qualified for the Europa League! 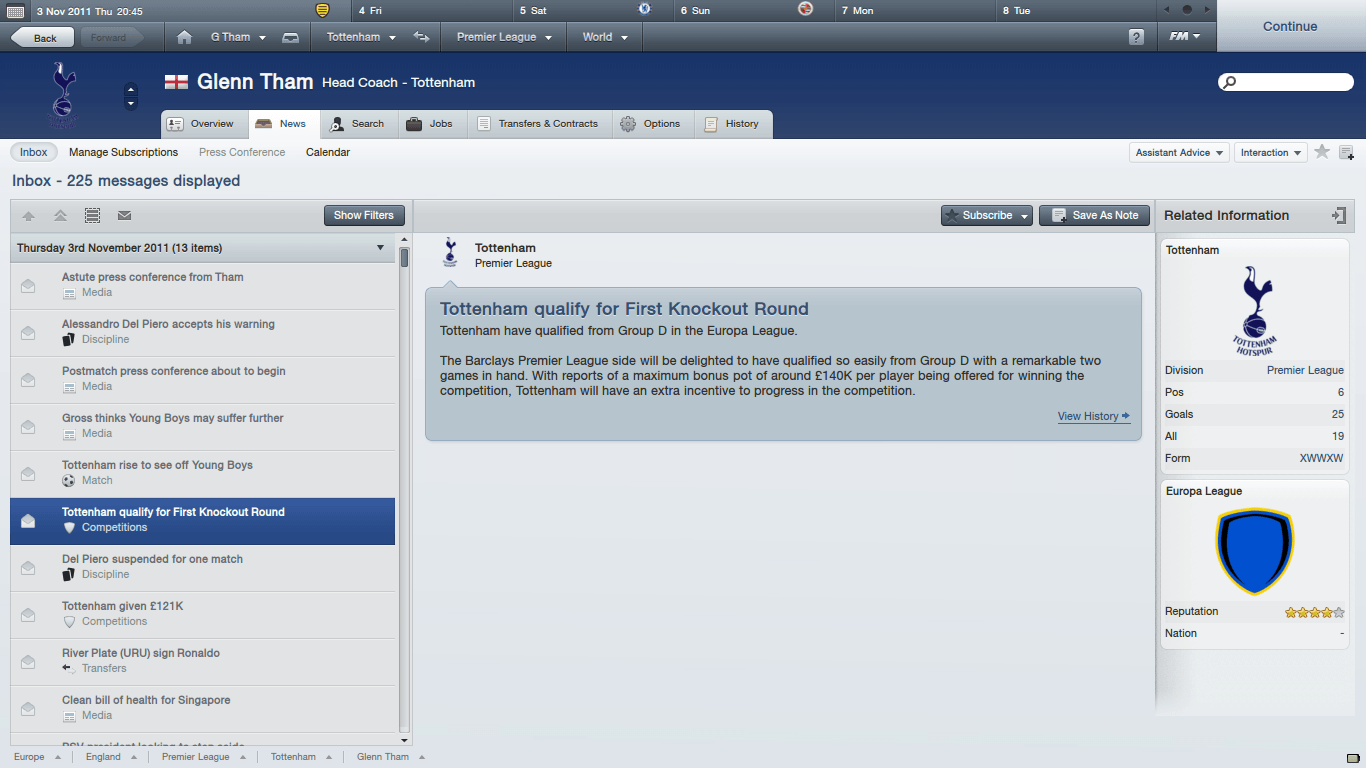 I am very excited as I see this as a winnable competition and I hope to win at least a trophy in my first year as Spurs manager. I've not told this to the press as they'll publish it and everyone will be writing me off and saying "too early", but that's my ambition and hopefully I'll be able to accomplish it with the FA Cup and Europa League right round the corner.
Login to Quote

Glenn T
10 years
My Spurs team disposed of under-performing Liverpool 2-0, with goals coming from Alessandro Del Piero and Dimitar Berbatov. Unfortunately Del Piero will be out for up to at least a month and a half as he fell down clutching his shoes in pain while wrestling with Liverpool's Jamie Carragher for the ball, something that my top physio Nick Worth later determined as a broken toe.

The Liverpool game was a good one although we could have really scored more than just two as Liverpool had their defense to thank, with their strikers all firing blanks.

Emmanuel Adebayor's inconsistency is acting up again as the Togolese striker has not scored since a 2-1 win against Young Boys in early November, which is about four games ago. However in the 2-0 win against Liverpool, the Berbatov goal was a solo effort from him as he made a point to run from the Tottenham goal to the Liverpool goal and played a splendid pass to his Bulgarian teammate.

Rafael's form has dipped slightly so I'll be re-introducing Brad Friedel back into the first team, Rafael can sit on the bench for awhile.
Login to Quote

Glenn T
10 years
November
A rather pleasing run of games! 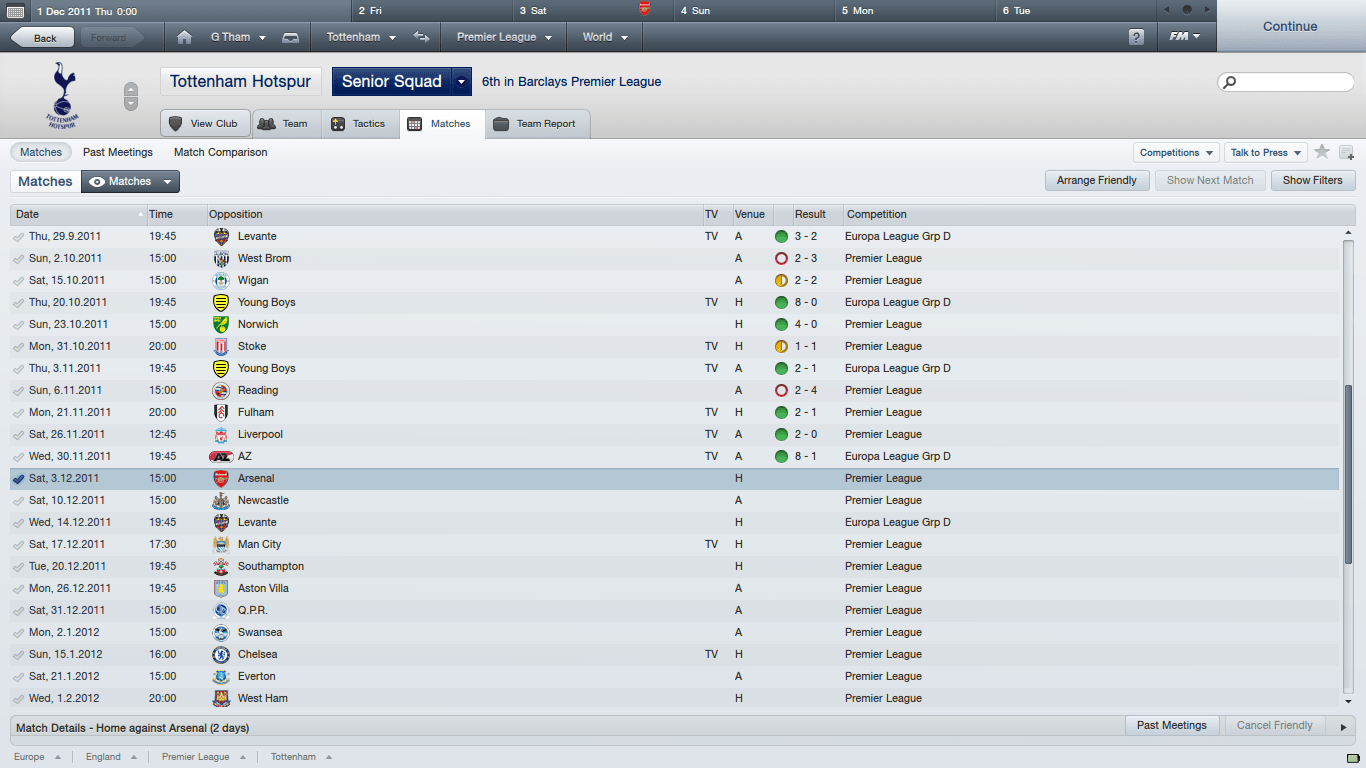 Unfortunately we still sit a humble 6th in the Premier League 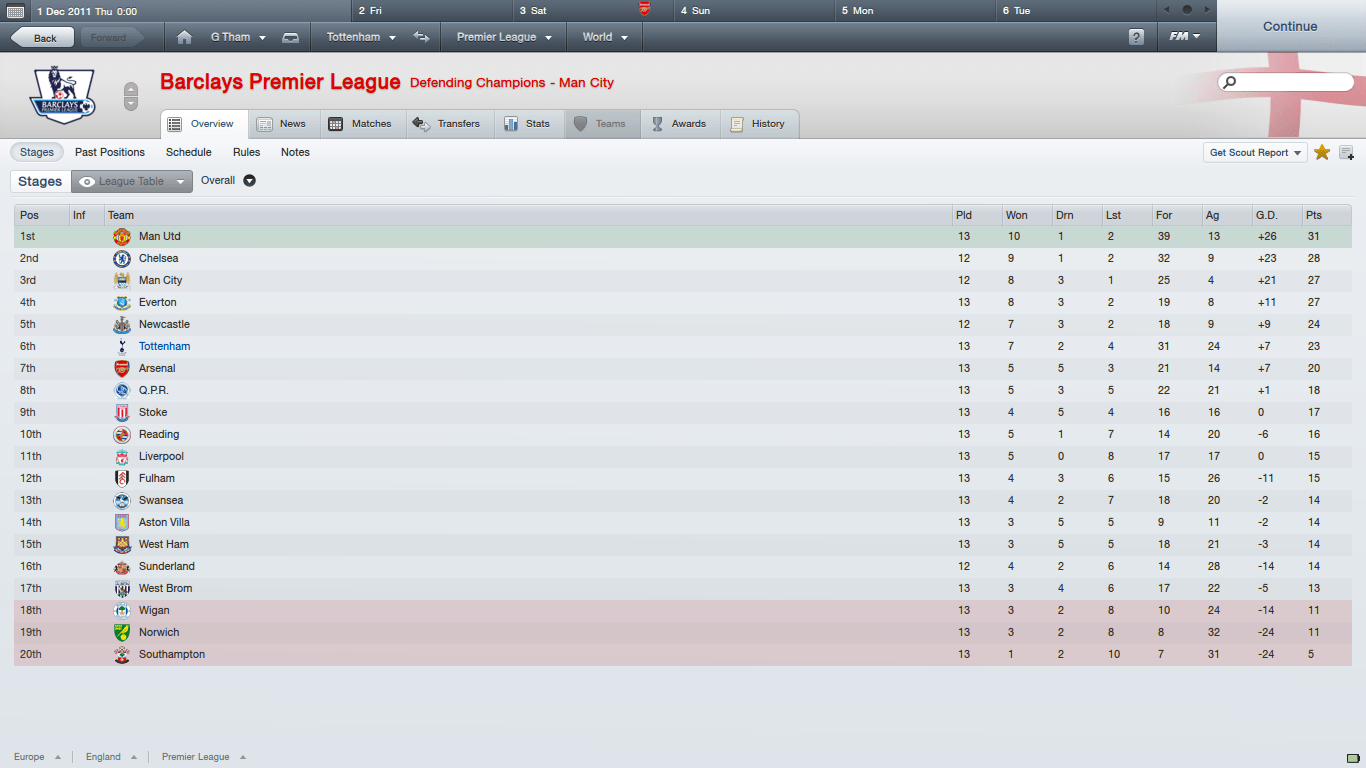 My 16-year-old Ivorian striker Souleymane Coulibaly has duly won the November Young Player of the Month award. He has shown good form in his last three appearances for the club, filling in for Alessandro Del Piero as backup to Adebayor and Berbatov, with his usual competition for the backup spot Harry Kane also injured.

Rafael van der Vaart has won the November Goal of the Month with a stunning strike against Reading, although we lost 4-2 in that game.
Login to Quote

Glenn T
10 years
December
Couldn't have asked for a better run of games! 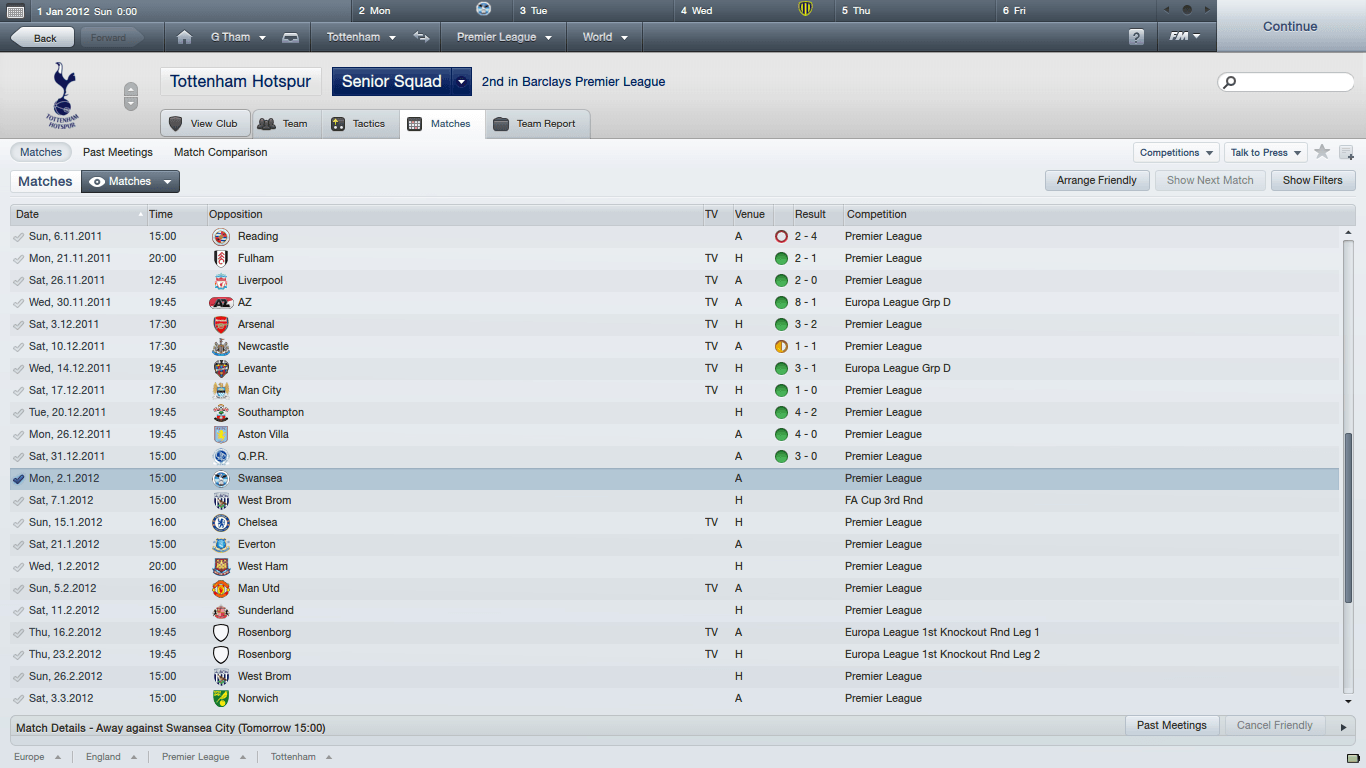 We sit an amazing 2nd in the Premier League 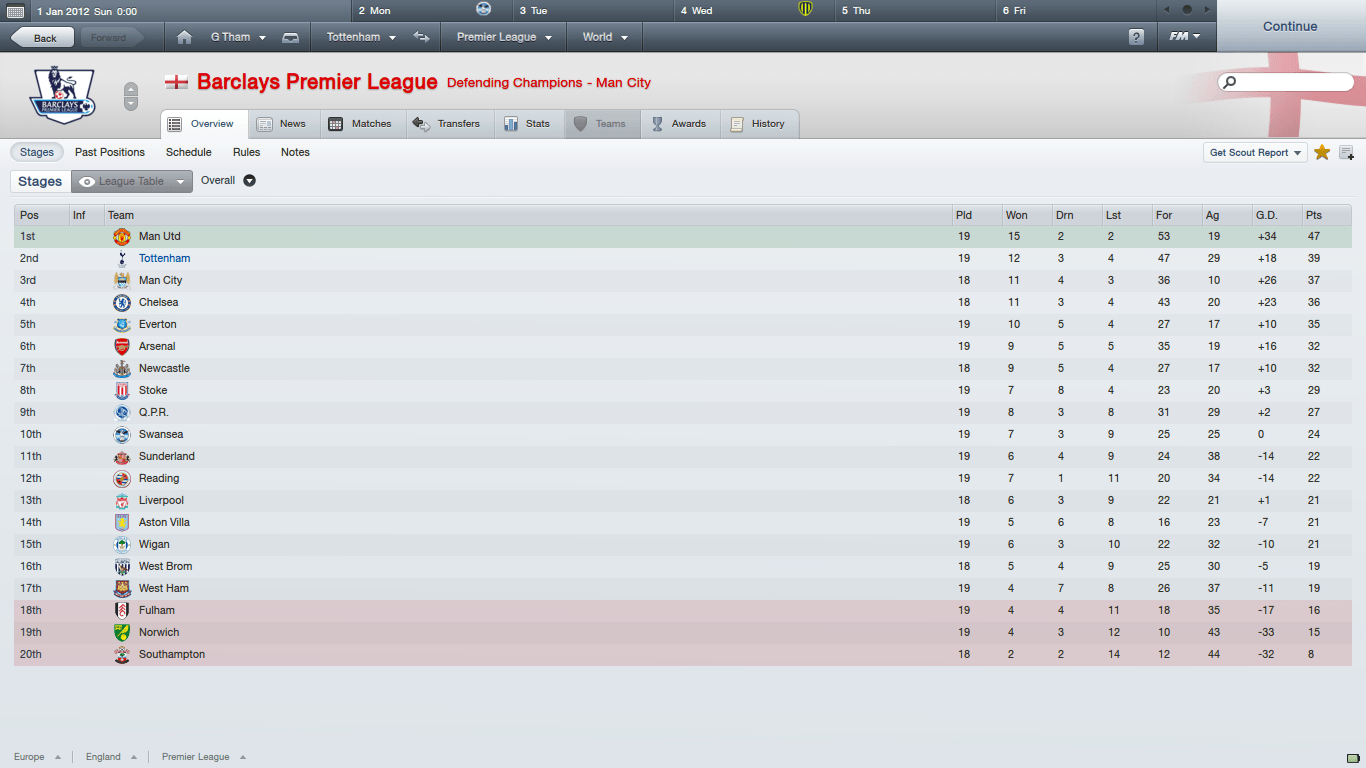 As the January transfer window beckons, the media are already saying I could put up a strong title challenge instead of trying for 4th or 5th, which was what the club and myself were originally aiming for.

I have won the Manager of the Month runners-up, losing out only to Sir Alex Ferguson who has taken his Red Devils side to the top of the Premier League table and 8 points clear of Spurs at 2nd. 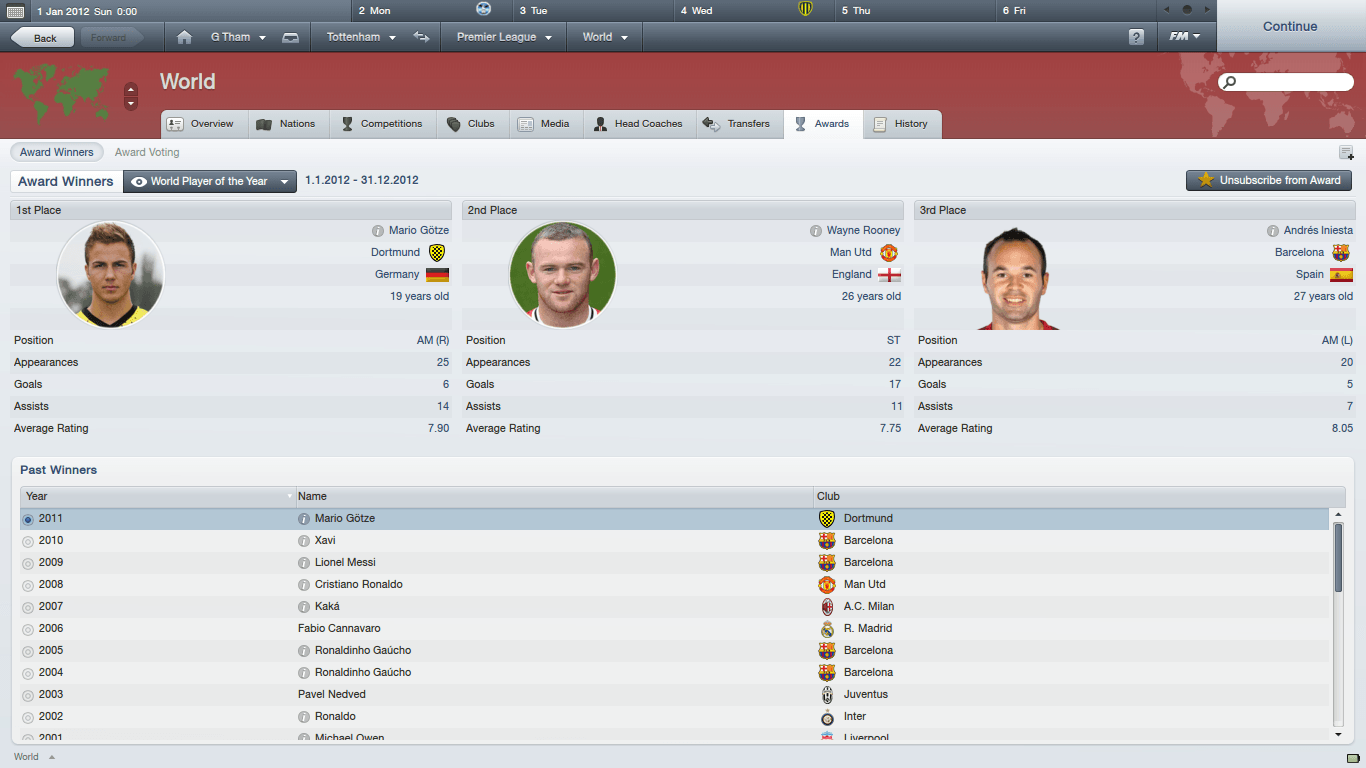 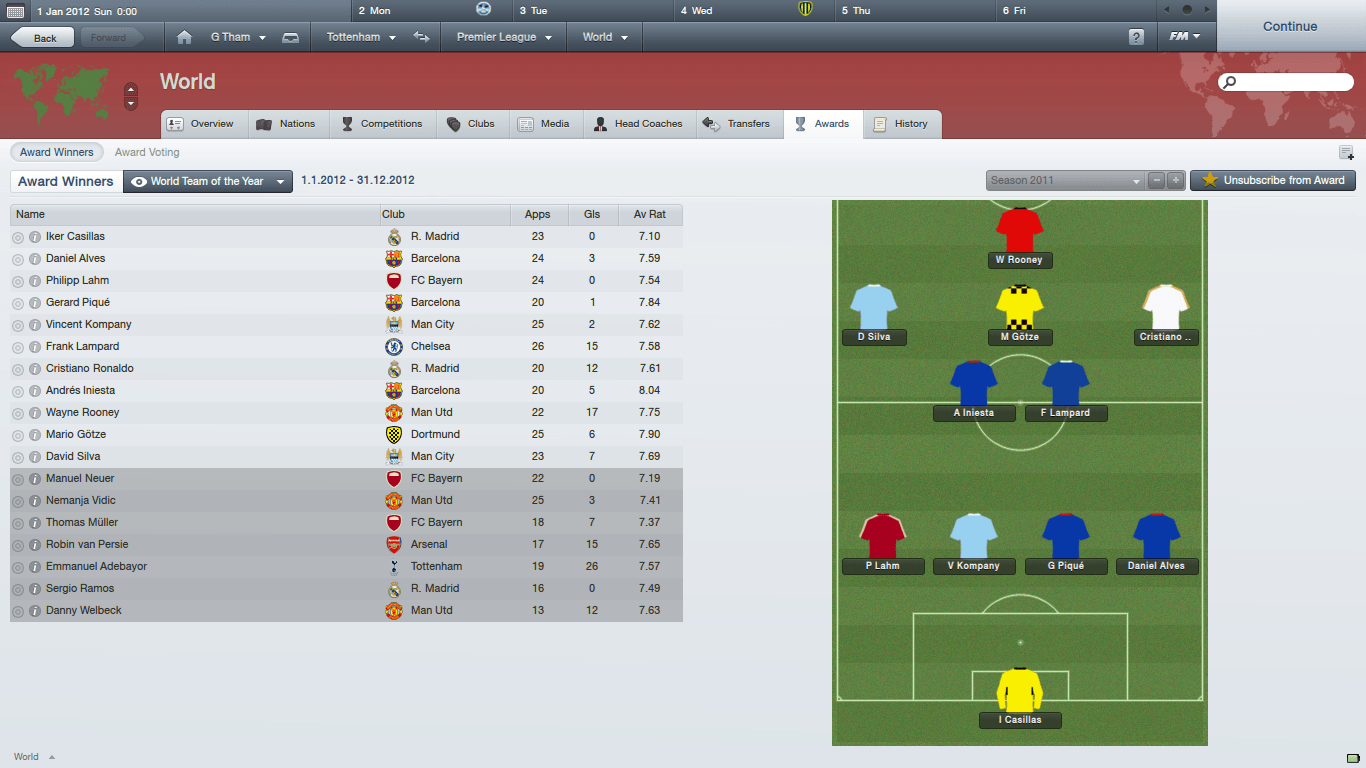 Glenn T
10 years
11/12: The First Half
The first half of my first season as a manager & as manager of Spurs has passed, and it has been a fruitful six months.

Although we had a little bit of a rough start we now sit 2nd in the Premier League in January, albeit with Man City having a game in hand and one point less than us.

Emmanuel Adebayor and Dimitar Berbatov have been a very effective strike partnership, and their goals have supported us very well these six months. However Alessandro Del Piero is showing signs of retirement, playing less than 5 or 6 games for us so far, with the combination of Adebayor & Berbatov, and also his nasty injury that he suffered only recently, keeping him out of the team.

Harry Kane and Souleymane Coulibaly have also been developing nicely as backup to Adebayor & Berbatov, but I'll definitely look at sending out Zeki Fryers and Tomislav Gomelt on loan. The former was signed from Manchester United this summer and looks a promising left-back while the latter is a Croatian winger who can play on both flanks and has much potential.

Leighton Baines and Rafael has not really lived up to their price tags. They are not bad but rather, they're average, unlike Adebayor and Berbatov who came for much much lower prices.

I have discovered that although I started my career at Spurs with Jan Vertonghen and William Gallas being the best two central defenders at the club, Michael Dawson, the captain and the first player at the club I actually got to know better, is quickly cementing his first team spot under me. Only until recently I have found out he works rather well with Steven Caulker, a promising central defender I originally intended to use only as backup, but with his good performances at center-back and with the likes of Manchester United chasing his signature, I will start rotating him with my other center-backs.
Login to Quote

Glenn T
10 years
January transfer window
It's only the second day of the transfer window but I have already announced a signing, a young Portuguese 16-year-old, who plays as a center midfielder. 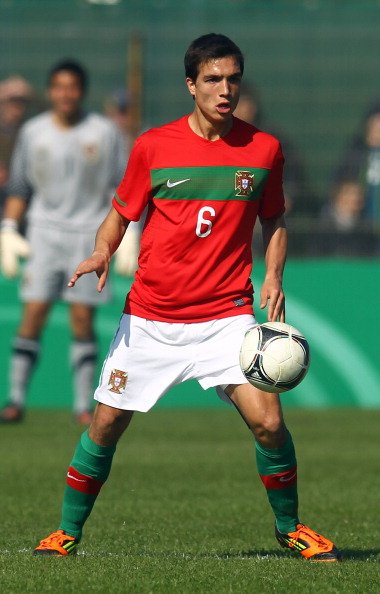 Sebastian Bassong is looking to leave the club, and I have agreed, because of his limited first-team opportunities here.