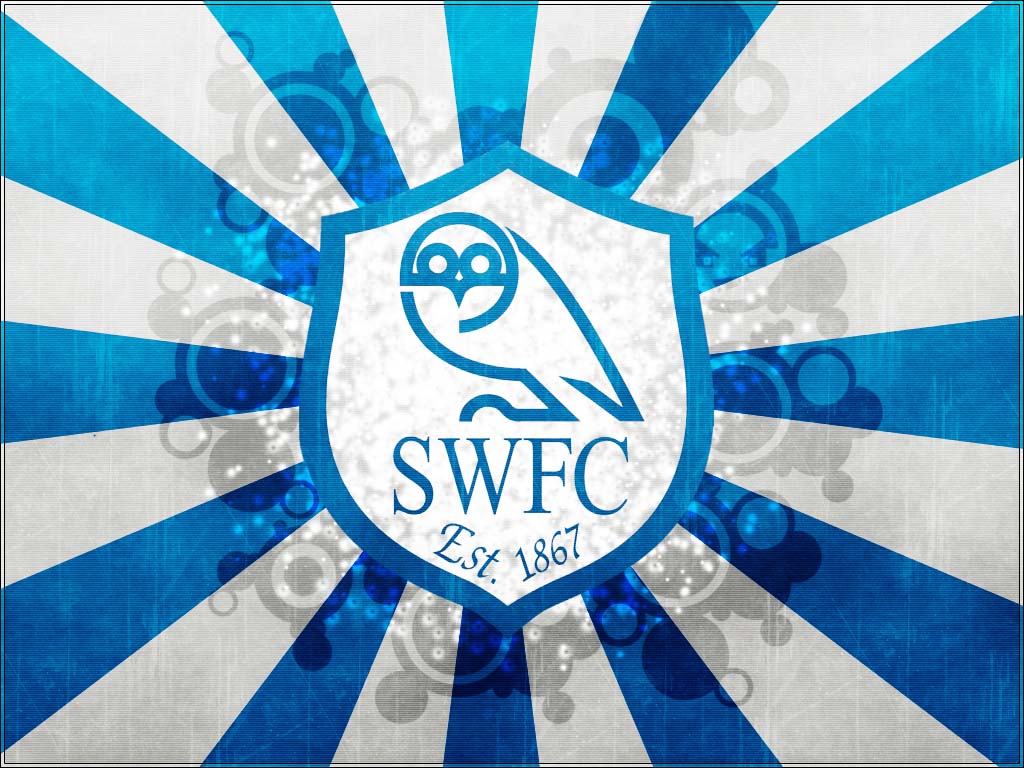 Sheffield Wednesday Football Club is a football club based in Sheffield, South Yorkshire, England, who are now competing in the Football League Championship, following automatic promotion from League One at the end of the 2011/12 season. Sheffield Wednesday is one of the oldest professional clubs in the world and the fifth oldest in the English league. They won the second ever football competition held, the Cromwell Cup, which remains in their possession. The Wednesday, as they were named until 1929, were founding members of The Football Alliance in 1889, and its first champions that inaugural season. The Wednesday joined The Football League three years later when the leagues merged. Sheffield Wednesday were also one of the founding members of The Premier League in 1992. Their main rivals are Sheffield United, the two clubs having contested the Steel City derby on a regular basis for some 100 years. Hull City, Barnsley, Leeds United, Bradford City, Huddersfield Town, Rotherham United, Chesterfield and Doncaster Rovers are also local rivals.The Owls have spent the majority of their history in the top flight of English football since joining the Football League in 1892. They have won four League titles, three FA Cups and one League Cup, but their League Cup triumph in 1991 is their only major trophy since 1935. They did reach both domestic cup finals in 1993, but lost 2–1 to Arsenal at Wembley on both occasions.
They play their home matches at Hillsborough Stadium in the north-western suburb of Hillsborough. It is a 39,732 all-seater stadium built in 1899.

Due to money reasons, Dave Jones didn't extend his contract at Wednesday, Mandaric later said "He was asking for too much, so I had no choice but to let him go, I already have some managers in mind, but I'm all ears". The next day J Barber was appointed as a replacement, a shock to most Wednesday , who have hardly heard of him before. He described it as "a dream come true" He added "Being from Sheffield myself, I always wished this day would come. I hope the give me time to settle in, and I promise to deliver them success to this club"
Login to Quote


Just note I'm playing with LFCMarshall's update, so I'm starting in the Championship.

Here's what is expected from me: 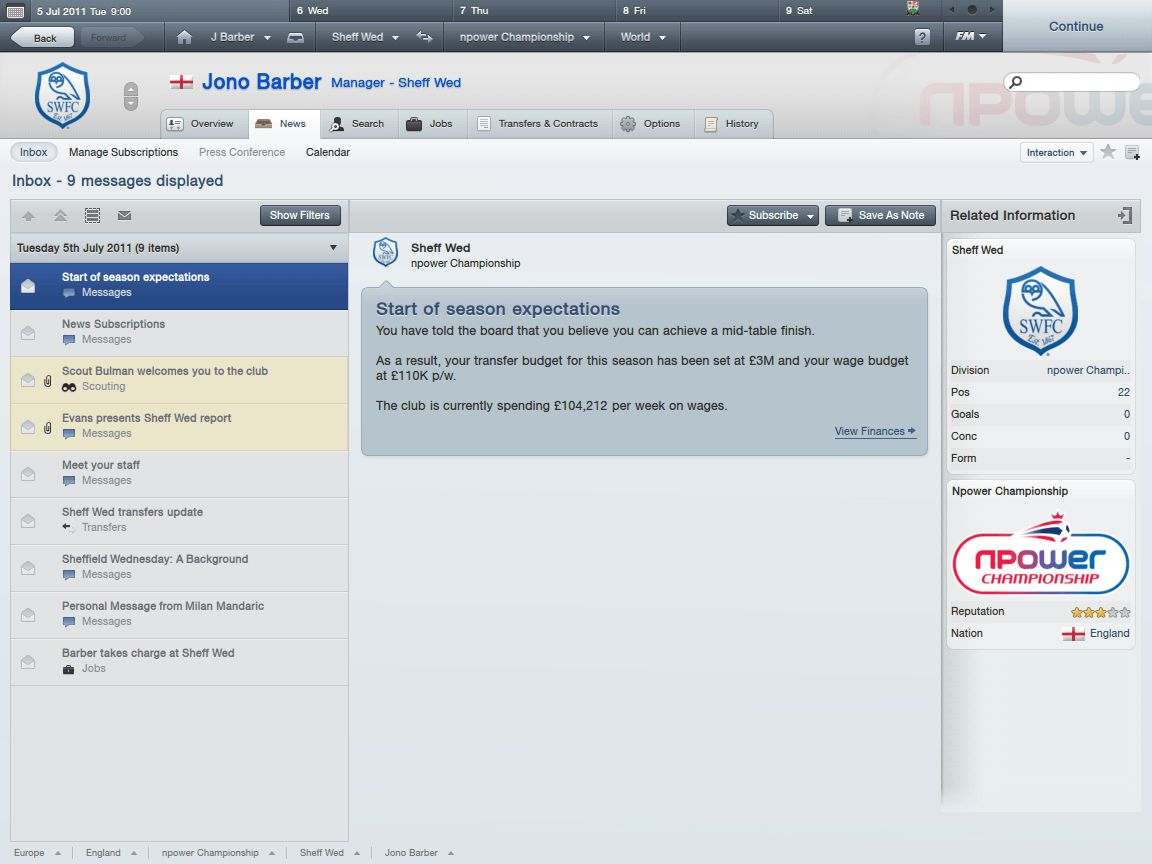 Throughout the season I will be using 2 tactics, one for where I'm the underdogs, or away in an even match, and one where I'm the favorites. 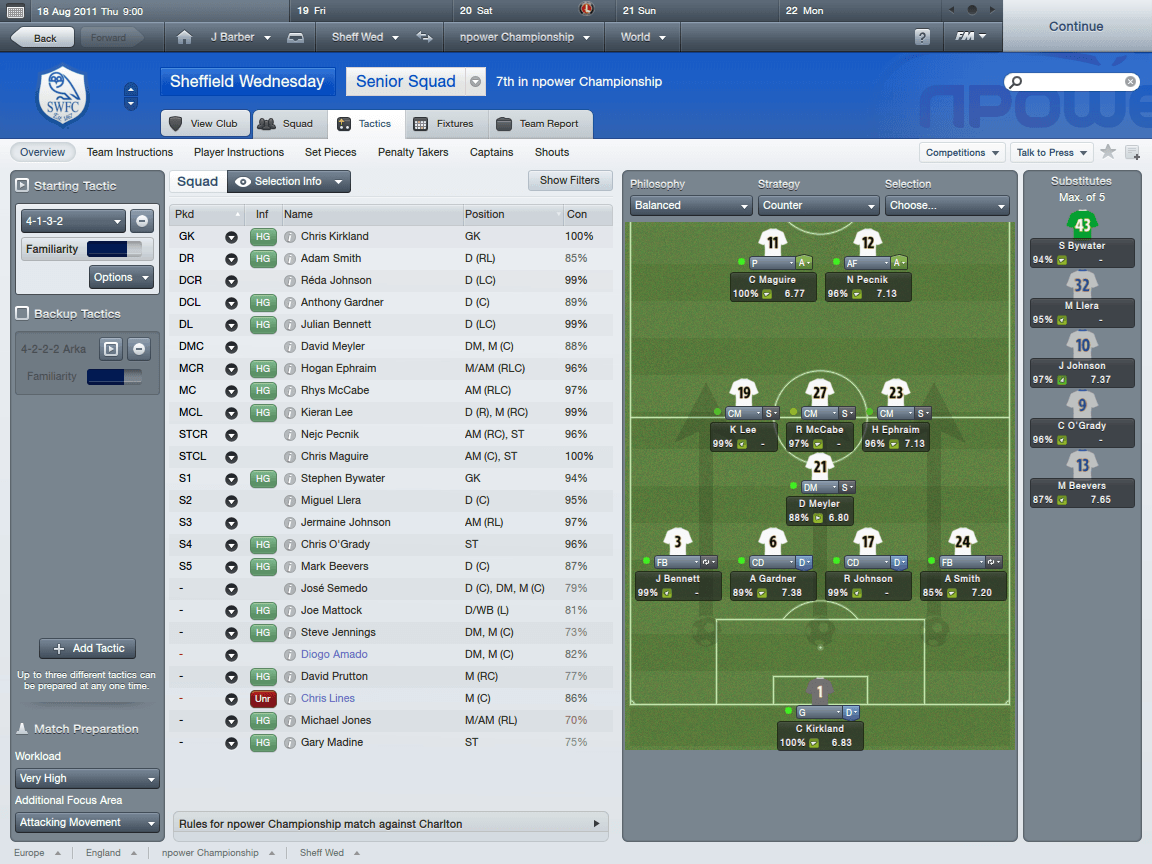 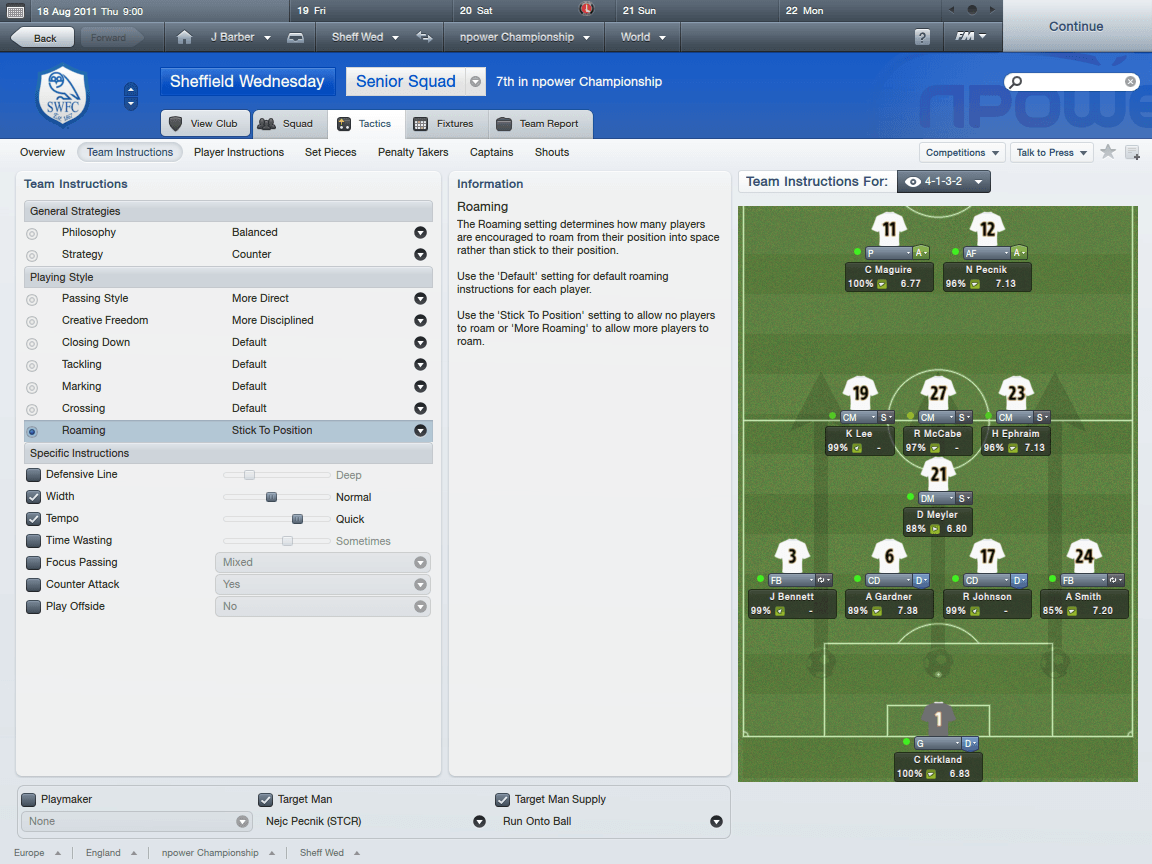 Tactic where I'm favorite, still nothing too advanced: 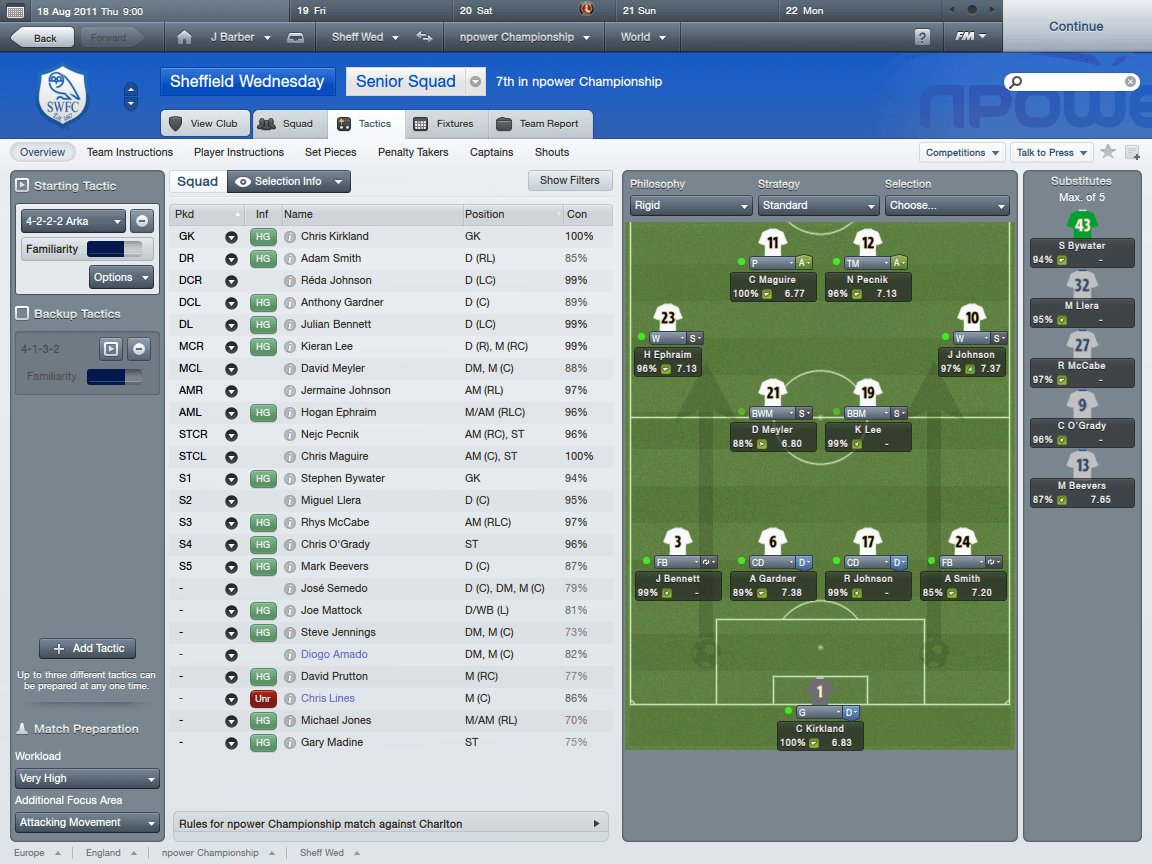 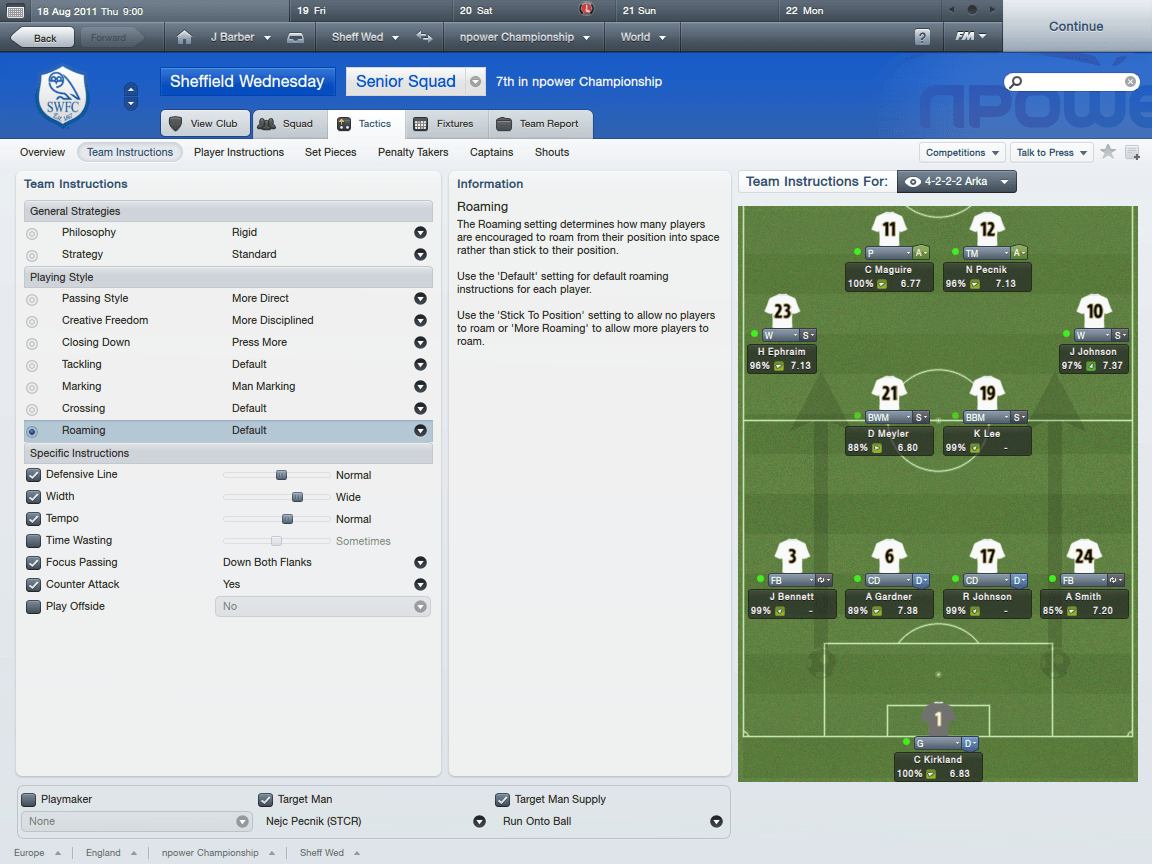 I was certainly busy in the transfer market, Mandaric kindly increased the wage budget, so I could attract more quality. The players I brought in: 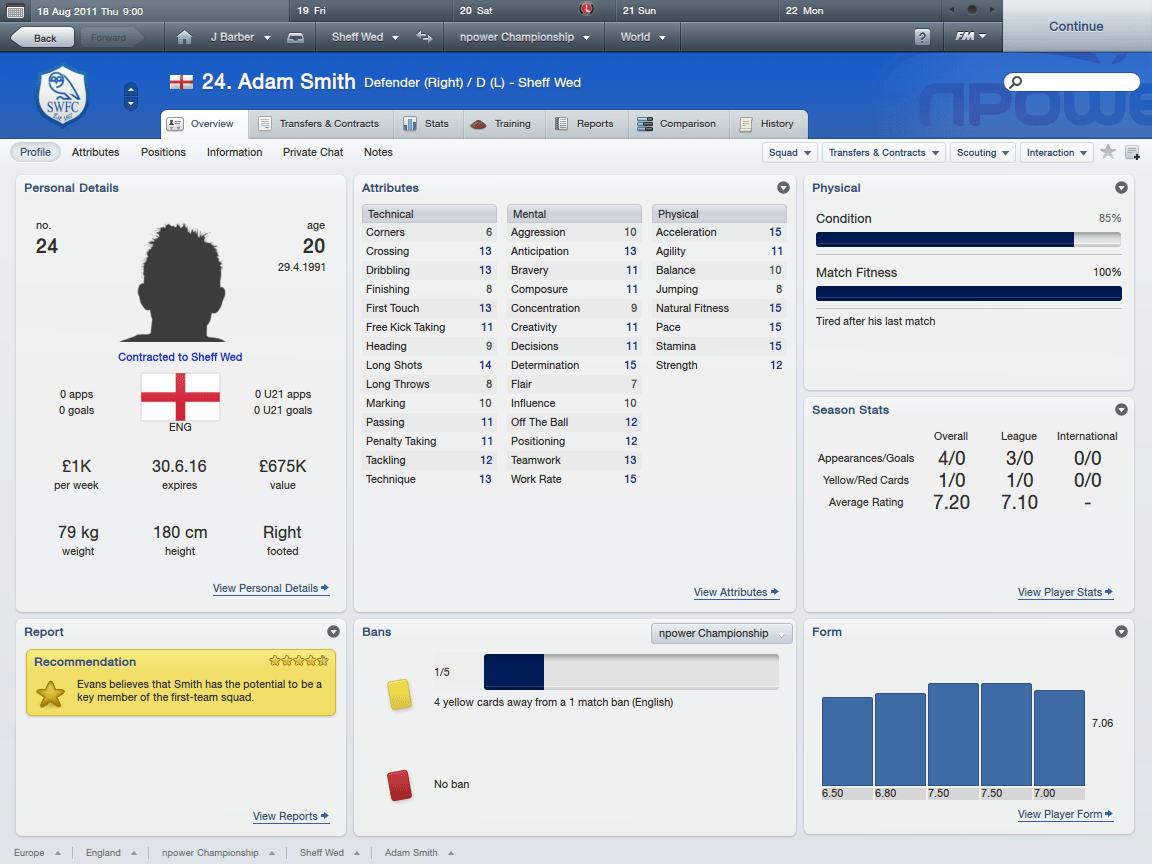 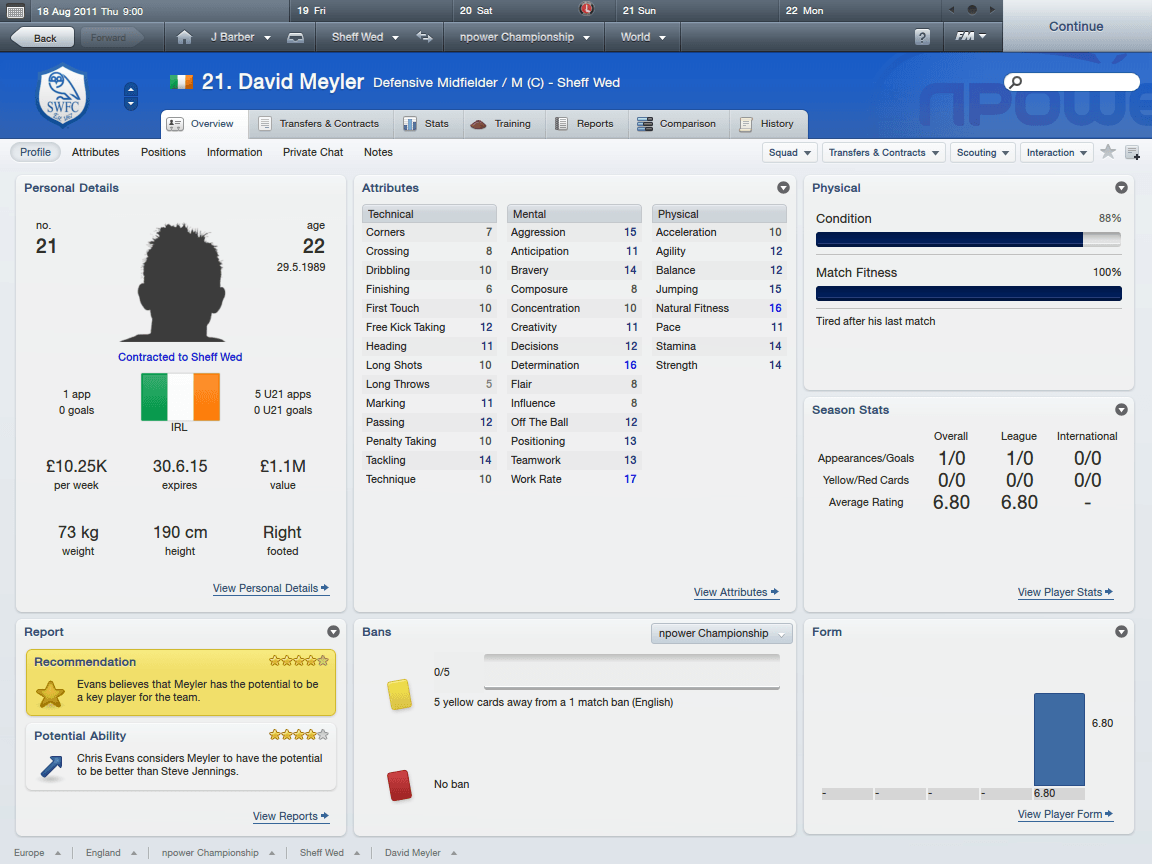 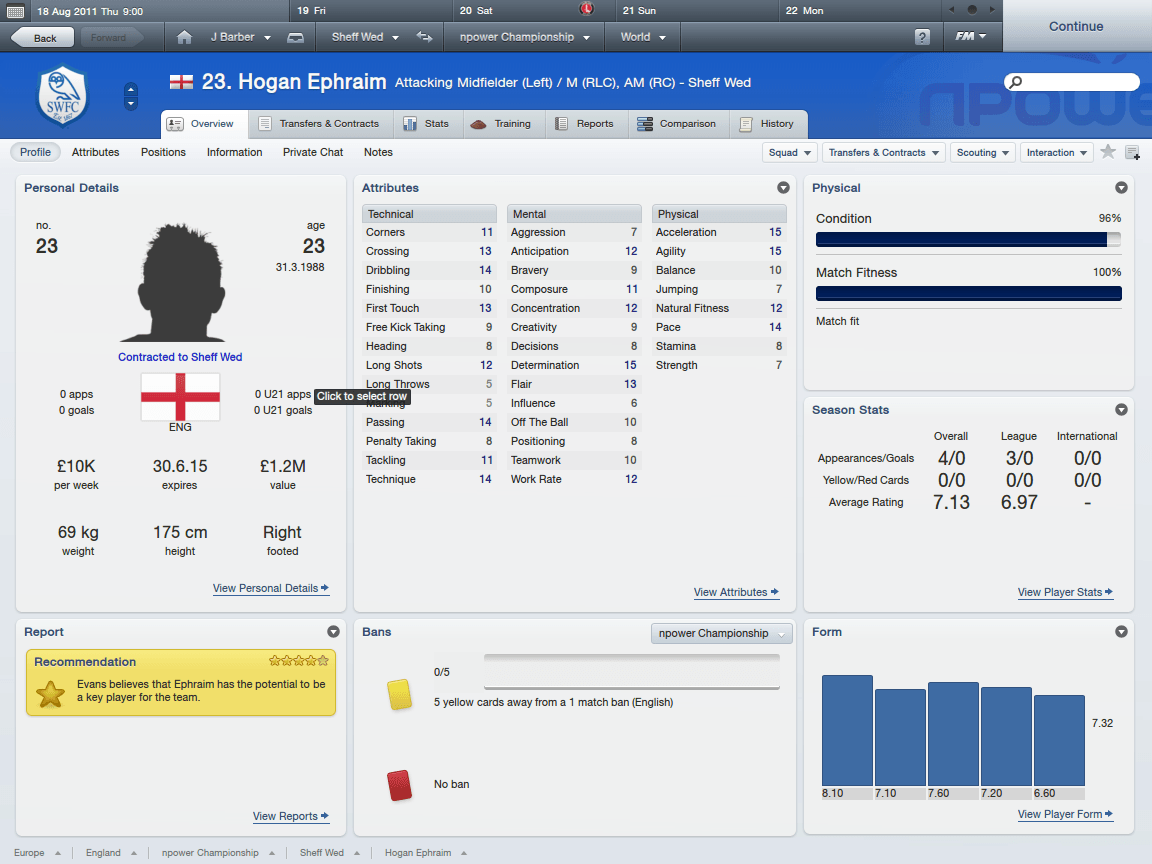 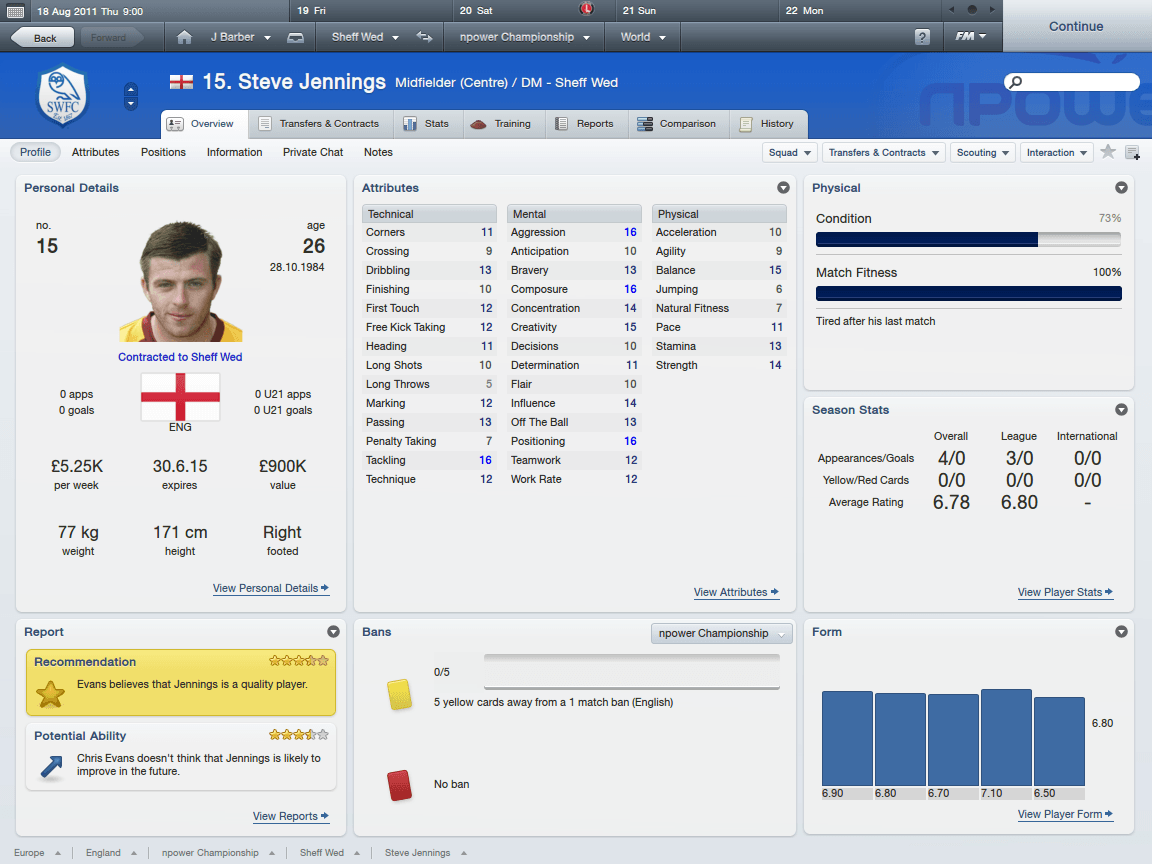 EvertonMan1878
10 years
looks promising, seems to have potential to move on to better things, try kezman who played at chelsea, free transfer, and maybe guti although dont think he will go that low, if get the team playing football suitable to them i dont see why cant go on and do very well,good luck
Login to Quote

The FM Rookie
10 years
great idea starting with Wednesday, havent seen a wednesday story yet. lets see where you get them to
Login to Quote

First game of the season was against Blackpool, I was hoping for a good start, but after going 2-0 down I thought it would be the exact opposite. The lads turned it round though, ended 4-3.

The draw gave us a pretty easy opposition, York City, a comfortable 2-0 win in the end.

The FM Rookie
10 years
some turnaround. keep it up and wednesday can go places
1
Login to Quote

We played Palace at home, they were seen as the underdogs, understandably too as we recorded a nice 3-0 win in the end.

Traveling to Ewood Park we knew we had a tough game ahead of us, despite our efforts it ended in a 2-0 loss.
Login to Quote

We've drawn Q.P.R in the 2nd round of the Carling Cup.
Login to Quote

We faced Charlton, who were also recently promoted, so I knew we had a chance of winning this, but in the end it was a very disappointing 1-1 draw. We had 17 shots, 10 of which were off target, we hit the woodwork twice and had a penalty called denied were Jermaine Johnson apparently "dived". Oh, football.

Nejc Pecnik is out for 3-4 weeks with a twisted ankle.
Login to Quote

Today we faced Q.P.R at home, and I knew this was going to be a tricky fixture, especially with the Man Utd link of Fabio and Park down the left. I encouraged my boys as much as I could but it wasn't enough, we lost 1-0 in the end. We also had a penalty call denied, again, in the 53rd minute, 2 minutes later they score.

An efficient performance from the lads helped us see off the challenge from Hull, we won 2-0 in the end.

A much expected defeat today as Wolves extend their record with 6 wins in 6 games, they won 3-0.
Login to Quote

You are reading "Sheffield Wednesday - Bringing Back the Glory Days!".