neymar
8 years
Briliant story so far, how long left till next update?
Login to Quote

Darsh_SS
8 years
Erm, I had to sleep

and I have school/college now so I think the next update will only be from around 6-7 hours of this post. I do have around 20 mins now but I want to make every post enjoyable, so. Yeah. I'll try to do it as soon as I get back.
Login to Quote

Kiwi
8 years
Don't worry CarTOON, Neymar has a knack of asking everyone.....
Login to Quote

Darsh_SS
8 years • Edited
"So, Steve - have you informed the players we're selling that we've got bids for them?"
"Aye. I've informed everyone except.." he stroked his head uncomfortably before saying, "Robin van Persie."
"I'll do it then" said Craig. "Might as well get it over with."

"This is your boss, Craig. We've accepted bids of 30m for you from A.C Milan, Juventus, Inter Milan and Manchester United. And a 21.5m bid from PSG."

"That's great. I'll get my agent to negotiate a contract and I'll be out of your hair soon."

The next night it was revealed the Robin van Persie transfer saga was finally over, but the Dutchman shockingly decided to reject offers from the trio of Italian giants A.C, Inter and Juve and Manchester United but instead decided to join PSG,reportedly on a lower wage than he was on at Arsenal.

Glenn T
8 years
He probably snubbed the 30M offers to go for the 21.5M one because he wanted to annoy you.
Login to Quote

Darsh_SS
8 years • Edited
That was my initial thought. He became the villian I made him out to be.
Login to Quote

Darsh_SS
8 years
Pre-season well went for the Gunners, with them grabbing 6 wins and a loss in 7 games. 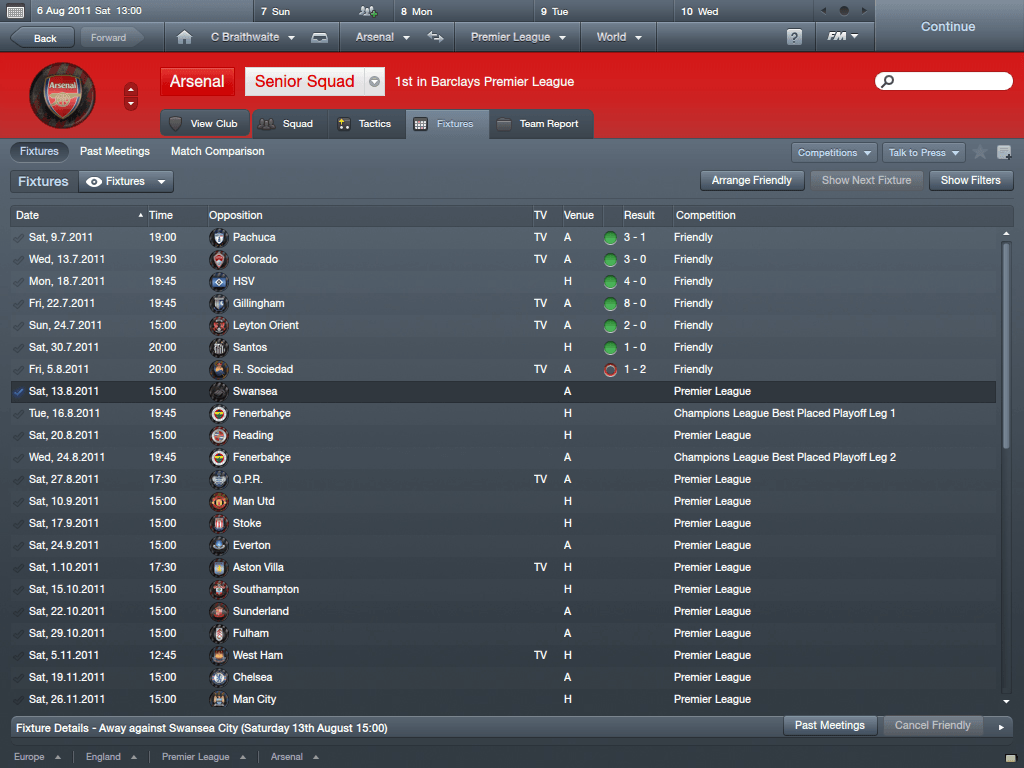 Players started streaming in slowly and by the end of the last friendly, Arsenal's new squad was complete. 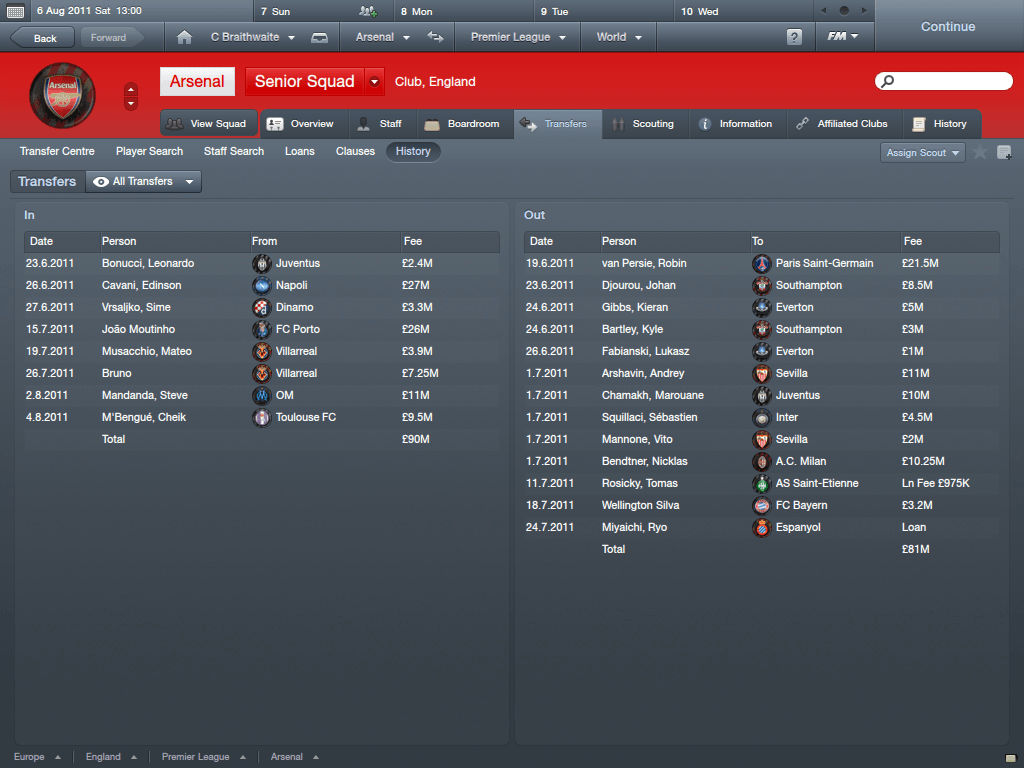 The fans however, were not happy, as many of their players they grew to love over the years had left, and their manager too.

They had reserved their judgement on their new players, waiting to see them in action before forming an opinion.

That did not bother Craig Braithwaite. After their last friendly the players returned to the locker room. Everyone was dissapointed with the loss but forgot all about it as they saw their manager standing in there waiting for them all to enter and settle down.

"The break has gone well boys. You have all got playing time and now you are all fit for the new season. Last season was not one to remember. Neither were many seasons before that. You all know that it has been years since we have won a title. We are going to change that this season.Thomas, as team captain, what do you think?

Vermaelen got up infront of the team looked around and saw everyone looking at him. He felt overwhelmed being captain after van Persie left, but realized that he had to step up to the plate now."I feel we need to give 100% this time around. We've got a great chance at winning the title. We shouldn't be satisfied with just getting Champions League football. We are Arsenal. We're gonna be the champions this season!

The faces of all the other lads got charged up.

Wojciech Szczesny got up and yelled, "COME ON LADS! WE CAN DO IT!!!"

Craig Braithwaite had a smile on the corner of his face as he left the room quietly and chaos broke out in the room.
Login to Quote

Akash
8 years
I was thinking of a good way to sum up my transfers, and you did a pretty fine job running through them. I will follow suit. How do you plan to work through your matches?
Login to Quote

Blue
8 years
Really liking the format of this, will be following it for definite. Good luck, you might need it, managing Arsenal can be a challenge.
Login to Quote

#61948 akash.vidyasagar : I was thinking of a good way to sum up my transfers, and you did a pretty fine job running through them. I will follow suit. How do you plan to work through your matches?

I haven't really thought about it yet. I just don't want to type down the scores, but I don't want to take up too much time for every match, or its going to take too long.


#61952 manchesterblue97 : Really liking the format of this, will be following it for definite. Good luck, you might need it, managing Arsenal can be a challenge.

Thanks, would appreciate suggestions to improve it as we go along. I'll probably need the luck too since I don't have too much experience playing FM.
Login to Quote

Gurdit
8 years
Ok, that does it...I'm going to have to start a new story with a club in EPL. This is just too much fun.

Darsh_SS
8 years
Hey guys. Just wanted to let you know that that next update will possibly only be out around tomorrow, because I've spent most of my free time today progressing in-game, and I have a test to study for tomorrow. There's also a chance I might post later on today, it all depends on when I can finish my studying.

The pre-season was over, and finally the moment Craig Braithwaite was waiting for his entire life came. His first game as manager.


The whole team travelled by plane to Wales, where they were to face Swansea at the Liberty Stadium for their first game.

Braithwaite was jumping around in excitement like a 4 year old hyped up on coffee and candy. He did manage to be normal around his players though.

The team finally reached the stadium. Braithwaite decided that he couldn't keep calm enough to manage the team so he left the job to Steve Bould as he bought a ticket and sat in the away fans section waiting for the players to walk out of the tunnel.

Things started well for Arsenal as Theo Walcott robbed Chico and the box and fired home an early goal. In the second half things went well for the Gunners once again as a Swansea corner turned into an Arsenal counter attack as Edinson Cavani, Gervinho and Theo Walcott sped across the pitch to the other side. Walcott played a through ball to Gervinho, and Gervinho to Cavani. Cavani and lone defender Chico were in a tussle for the ball but didn't last long as Chico ended up flying several meters away as Cavani slotted one easily past the keeper.

Things looked done and dusted for Arsenal, but Robson-Kanu's 80th minute effort from outside the box flew into the top corner and reminded them that there was still another team in the game.

Swansea put more pressure on Arsenal and it paid off as Dyer's 89th minute cross met Leon Britton's boot and flew into the net gifting the Welshmen a point in their opening fixture.
Login to Quote

You are reading "Arsenal - All Grown Up".