It's time to get back to what I love best. Fighting through the lower leagues with Newport County! I hope you all enjoy reading this story as much as I will enjoy presenting it to you. I'm really looking forward to staying with one team and building it from the ground up again.


Chapter 4 - Contending in the Championship


Chapter 5 - A journey ends, while another is just beginning - The Premier League

Akash
9 years
It is unfortunate you cannot see my face right now - because I am smiling from ear to ear.

joannes3000
9 years • Edited
The first order of business is to install my tried and true 442 tactic - link. With only 5 bench slots in league play it makes sense to have as standard a formation as possible. Plus I've always had good results with it.

After selecting starters with the default roster, here's how a healthy first team will look: 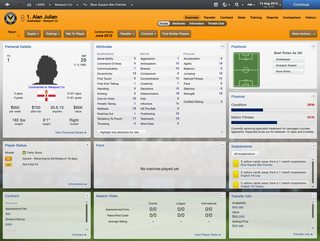 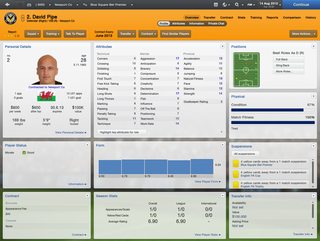 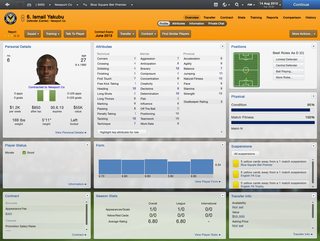 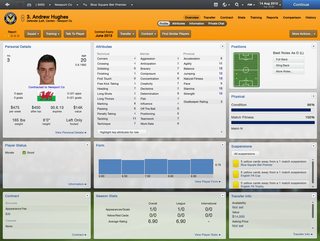 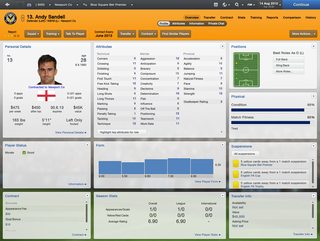 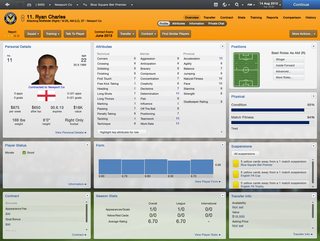 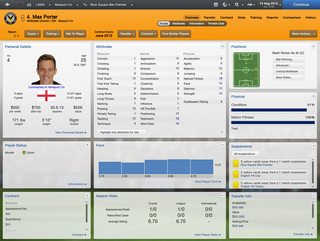 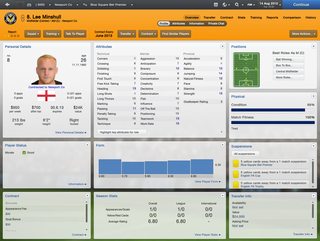 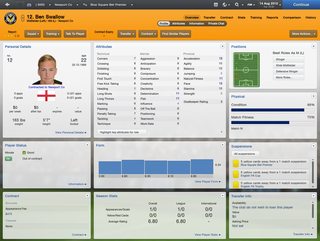 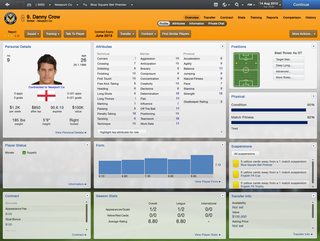 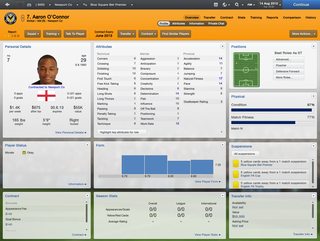 Kiwi
9 years
It it a pleasure to have you back writing here - to coin a phrase, an old (well, maybe not so old) face in a familiar place.

Best of luck with Newport, and keep a watch for a Brazilian striker nicknamed Caca, I hear he could be class.
Login to Quote

JackKn!feRoy
9 years
i am looking forward to this story aswell.
especially because newport look like a fun place

Blue
9 years
Good luck, will be following, specially as you're a Blue.
Login to Quote

joannes3000
9 years • Edited
Having met with my chief scout and his 3 CA / 4 PA, it's time to look at improving the staff! We added Ian Bowling (GK), Billy McEwan (Coach) and Iwan Roberts (Coach) to the support staff this first season and I'm hoping a successful campaign convinces ownership to give me a few more staff members. As is, we have 3 stars in Strength and Shooting, 2.5 stars in Defending, Shot Stopping and Handling, 2 stars in Tactics, and 1.5 stars in Aerobic, Ball Control and Attacking.

Back to scouting, it's not a huge priority given the facility and stature of the club, but we went looking for some good CA/PA guys to help out as much as possible. We brought in Bobby Roberts (12/12) for the time being and will look to get a proper Chief Scout down the road.

With a 40k transfer budget, we could dip decently into the market but we'll scan for free transfers first and increase our weekly wages instead. Wages are set at 18.46k per week, with 2.01k per week currently available. We'll be sure to attend the England Trial Day to see if there are any prospects to sign from there and I'm already itching to start looking for new recruits!
Login to Quote

joannes3000
9 years • Edited
As usual our offseason was spent on as many high profile friendlies as we could squeeze in. We also played the reserve team just to get match fitness started up. And while all four friendlies resulted in losses on the pitch, they resulted in positives to the bank account.

With league play around the corner it will be interesting to see how we look on the pitch in the first few games. The squad will take some time to get used to my tactics and I'm going to try and speed up that process by focusing on them. I'm still getting used to the new training options but I have them set to the following:

General Training - Balanced, Average Intensity. This seems new to me, so I'm going to stick with a balanced setup for now. And due to the ridiculously long league schedule in the BSP, I'm opting for average intensity to try and keep conditioning levels high.

Match Training - Tactics Only. This looks to be the same from previous FM versions with the addition of the tactics focus. I had always used the teamwork focus but focus on tactics makes sense. I want the players to get used to my 442 as soon as possible.

In order to help speed up the learning process, I've set the scheduling slider all the way to the left for a 50% split between general and match training. As in previous versions of the game, we'll scale this back once tactical knowledge has reached acceptable levels.
Login to Quote

joannes3000
9 years • Edited
Our first new face is front man Nicholas Bignall. He joins on loan from Reading for the season and becomes our starting poacher. Not only is he an immediate upgrade in the starting eleven, but he also strengthens the bench by putting Aaron O'Connor in a reserve role where his low stamina won't be nearly as much of an issue. 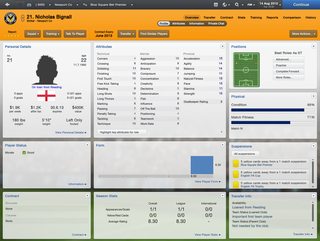 Then due to our first major injury - losing Ismail Yakubu for 2 to 3 weeks - we snapped up Danny Hall on a free. He should provide cover for all three back line positions and gives us more much-needed depth and versatility in our five man bench. 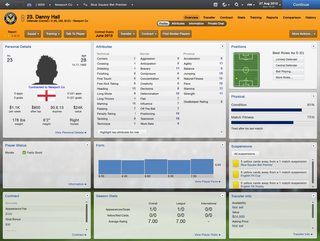 Blue
9 years
Isn't Ishmail Yakubu an international for someone? Nigeria I think.
Login to Quote

The FM Rookie
9 years
Another stairway to heaven? I think so! I will definately be following this Joannes
Login to Quote

joannes3000
9 years • Edited
My first month leading the Exiles couldn't have gone much better. After a testy opening game at Mansfield, we had two dominating performances to the delight of our home crowd. A scoreless draw at Braintree has me a bit worried about our away form, but it's early yet. We ended the month on a strong note with a well-earned victory against Hereford. 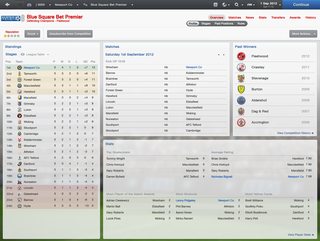 We conducted a few bits of business just before the end of the transfer window to help shore up our rotation of players. 46 games alone requires a deeper squad, let alone the general lack of natural fitness and stamina at this level.

Jamie Baguely and Karl Beckford help give us more depth at midfield, with both being able to play centrally and out wide. They will help provide cover for when Lee Evans gets called into the Wales U19 squad. Josh Powell gives us depth at fullback and centerback. The one thing about these guys is they all wanted to be on non-contracts with high appearance fees. I guess it's not a big deal since they will play bit roles and will only get paid when they actually play. 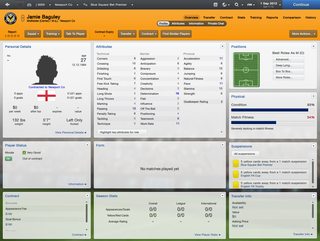 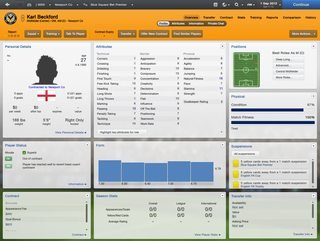 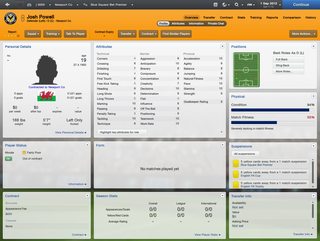 I also missed out on two of my primary transfer targets. My scouts felt good about David Steele wanting to sign for us so we worked out a 7k transfer deal with Tiverton. But when it came time to negotiate with Steele, he didn't want to play for us.

Then just before the window shut we went after Hone Fowler. We agreed to terms but his work permit and the following appeal were denied.

xXBlueXx
9 years
Woohoo back to the good old days! Haha!
Login to Quote

joannes3000
9 years
September saw our blistering form continue, this time going 6/1/0. You can tell when schedule congestion starts to set in. A demolition of Wrexham is followed by a narrow victory vs Dartford three days later and then another narrow victory over Stockport four days after that. The back end of the month was the same, as we had a close win against AFC Telford 3 days after our match vs Southport then a draw vs Grimsby that we were fortunate to get.

Our second straight undefeated month has our lead at the top of the table growing; now five points clear of second place and thirteen points clear of 6th place. Also, take a look at Nicholas Bignall starting to show his class! 12 goals scored in 12 games, 7.97 average rating, 4 PoM Awards. One final note is that we have our first choice keeper back from injury but it looks like he needs a bit more time to get more comfortable with the team. In four games, Alan Julian has conceded six goals. In twice as many games while Julian was injured, Lenny Pidgeley only allowed one more goal. 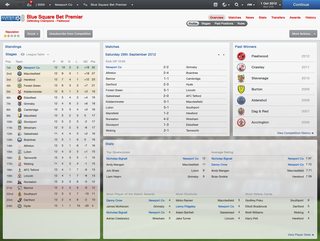 You are reading "I seem to recognize your face - Newport County".