Blue
9 years
This is my first story on Football Manager 13, and despite the multiple options I’ve given the public, I have decided to go for the Toon, one of the biggest and best supported teams in England. This won’t be like my FM12 stories; it will last longer, and be easier on the eyes for you to read.

I decided to choose Newcastle because I think it will be very fun trying to get Newcastle back into the top four and challenging for the title again, which is what they deserve.

In my first season I want to finish at least fifth in the league, guaranteeing European football next season, and then challenging for the title in the season after, and then win the title within two years of that. I believe this is possible.

So, good luck to me, and I hope you follow me on my journey! 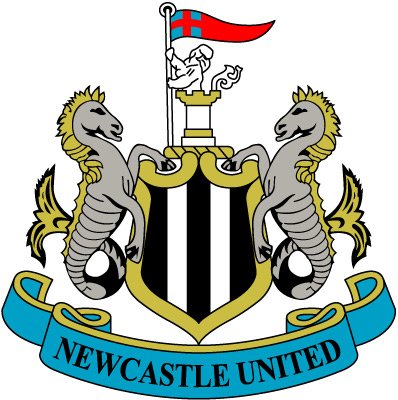 Pre-Season Review
Overall, a pleasing pre-season, although conceding 8 goals is slightly worrying, but I am pleased with the amount of goals we scored.

I am pleased with the incoming transfers, especially the Gonul signing, and I am also in talks with Eugene Konoplyanka and Adam Lallana to bring them to the club, although I am only going to sign one, as my budget doesn’t stretch far enough to make two expensive signings, especially with the ones I’ve made already. I am very annoyed with the sale of Demba Ba to Chelsea, as he was a big player to use, and I had no choice but to accept, what with the £7m release clause he had, which I wasn't informed about. This is why I’m after a left winger, although 50% of his transfer fee went to West Ham, leaving me with just under six million to find a quality player.
Login to Quote

Cheers mate, I hope so
Login to Quote

JackKn!feRoy
9 years
ill keep my eyes out for this story how its gonna go, gl with your story
Login to Quote

ps cheers for the demba ba update, means if i start a career with them first thing to do is offer a new contract n up the release clause or get rid of it

ps cheers for the demba ba update, means if i start a career with them first thing to do is offer a new contract n up the release clause or get rid of it

He will ask for another, about £33.5m this time though
Login to Quote

A dominant performance in my first Newcastle game in charge, I couldn’t have asked for more really. We went close before we scored early on, and looked very dangerous every time we went forward, and no sign of the defensive wobbles that were common in pre-season. A very pleasing victory, but only early days yet, so we shouldn’t get over confident.

Transfer Update
Newcastle have completed the signing of Eugene Konoplyanka from Ukrainian club Dnipro for a club record fee of £19.5 million. He will wear the number 11 shirt, and is seen by many as a replacement for Demba Ba, who was utilized on the left wing, before he departed for Chelsea.

I was nervous about this tie, with two very evenly matched teams, and especially as I had a very good player, Ben Arfa suspended, which he will be in the next European game as well, but we managed to pull off a sparkling victory over a resilient Feyenoord side. I gave Konoplyanka a debut, and he impressed. I bought him for the first team, and this performance reinforced why he should be there. I also put Vuckic in, who is a great prospect, and he played well as well, I thought he deserved a goal.

No honeymoon can last forever, but I am still annoyed at the result after battering Feyenoord in the week. We didn’t have a shot on target all match, and if it wasn’t for heroics from Tim Krul on several occasions, we could have lost by a good 3 or 4 goals. It was always billed as a close match, and I suppose a point gained is a point earned.

We went to Rotterdam with a huge advantage, with it almost impossible to slip up and go out, but nevertheless we played a strong team to avoid embarrassment. Vuckic got another game as Ben Arfa completed the second of his three game ban. We got a draw, which put us through easily through, and I am pleased to have finished the month undefeated. A 5-2 win on aggregate against Feyenoord is one that I, and undoubtedly the fans, will be happy with.

Transfer Update
There were comings and goings involving the club on deadline day. Reserve team keeper Rob Elliot completed a switch to Watford for £150k, whilst Romain Amalfitano made a loan move to Crystal Palace. Mehdi Abeid also joined Barnsley for the season. The transfer coming in was the signing of Florent Malouda on a season-long loan from Chelsea.

Cup Update
After defeating Feyenoord in the play-off, Newcastle have been drawn into group F of the Europa League with CSKA Moscow, Bayer 04 Leverkusen, and Atromitos Athens.

Monthly Review
Overall, a good month, but I would have liked to pick up another league win, instead of the nervy draw with West Brom that I had, although I am pleased with the other matches. 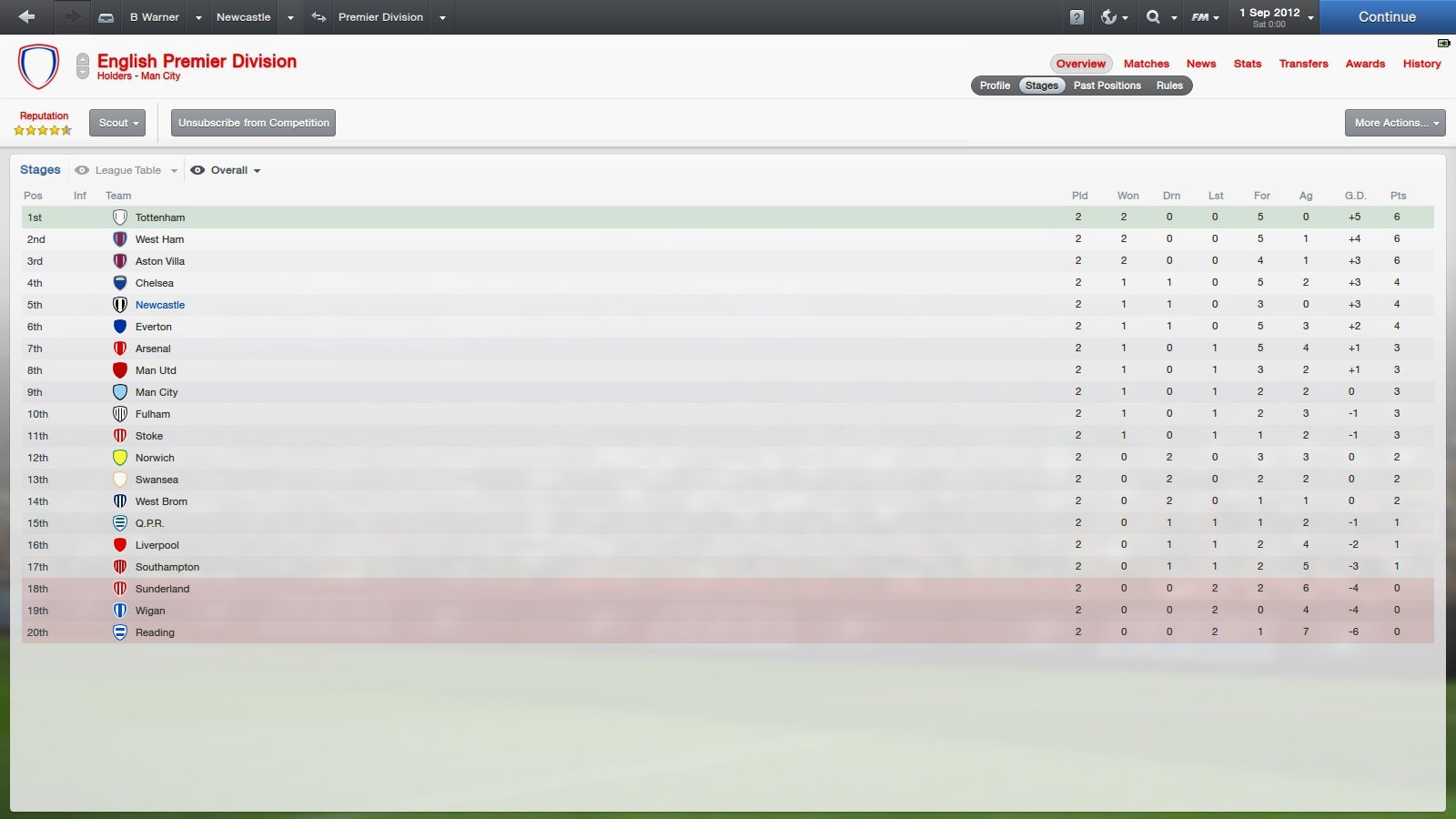 5th in the league with 4 points from two games.
Login to Quote

Blue
9 years • Edited
Sorry guys, but this story is being postponed until the full version comes out on November 2nd, and then I'm going on holiday for a week.

The reason for postponement is because the beta keeps putting my computer on sleep mode, or crashing into a white screen, which is getting very annoying, so I'm moving back onto FM12 until the full FM13 comes out, with these errors hopefully fixed by SI.

EDITED
There has been a change of plan. I've reinstalled the FM13 beta (keeping the Newcastle save safe, don't worry), and the problems seem to have gone away, so I am able to not postpone this. With any luck, the September update should be up tomorrow, with some riveting matches included.
Login to Quote

The FM Rookie
9 years
Come on the Toon! I really hope that this story goes well for you.
Login to Quote

Blue
9 years
I've already had a couple of good results in September already, as you'll see tomorrow.
Login to Quote

Liverpool promised a stern test for my Newcastle team, and it was a very entertaining game for the neutral, and although Krul was called upon in spectacular fashion several times, we never really looked like losing. The quickfire double we scored was something Liverpool never recovered from. This was a vital win, as our next three league games include Chelsea and City, both away.

In a very tough month for Newcastle, we pulled off a stunning result, when no-one gave us a chance, away to Chelsea at Stamford Bridge. Several players put in very good performances, but I am getting slightly concerned about the form of Papiss Cisse. His form has declined over the last couple of games, although to play upfront on your own against Liverpool and Chelsea can’t be easy, and we will hopefully see a better performance in the European game in mid-week.

We took a break from the tough Premier League games, and went to Greece for what was an easy game in the end. We got the early goal, which Atromitos never managed to recover from, and I am glad to say it was Cisse who scored and broke his two-game drought. I would have liked to have scored more, but a win’s a win, and we’re top of the group, although with four tough fixtures ahead.

It was going to happen eventually, and thankfully our first loss was against the league leaders, and not Norwich. The performance doesn’t fully reflect the result, we were playing well for long periods, but three lapses in concentration resulted in three point-blank range goals, and we were unlucky not to score more at the other end, although certain players such as Cabaye and Obertan did take multiple long-range shots. I am annoyed by the performance of Konoplyanka, especially as he was so impressive in Athens in mid-week. I have given him a fine of one week’s wages.

Well, a neutral couldn’t really have asked for more. An eight-goal thriller, two late equalisers for Newcastle, and a penalty shootout as well, this game had everything football fans dream about. I felt this is a winnable competition so I played a strong team, but now I have some concerns about the defence. Seven goals conceded in two games is unacceptable for a team that wants to be in the Champions League, but we won in the end. I am glad we also showed resilience, scoring in the dying minutes of normal and extra time, and then a dramatic penalty shootout win.

After our dramatic victory at the Brittannia in the week, we headed for Manchester with everyone, including me, expecting us to get battered, and in truth we could have played a lot worse in this match, which doesn’t reflect the result. There were some very disappointing performances from players who need to set a good example, which is why Coloccini, Cisse, and also Santon have been fined a week’s wages each. Even though we didn’t play awful, we should have put some fight into it, instead of just taking it.

Monthly Review
With four very tough league games in this month, we can be thankful to have won two of them, and also got two cup victories as well. There were also 5 matches in the last half of the month, so thankfully October will be a lot less stressful. 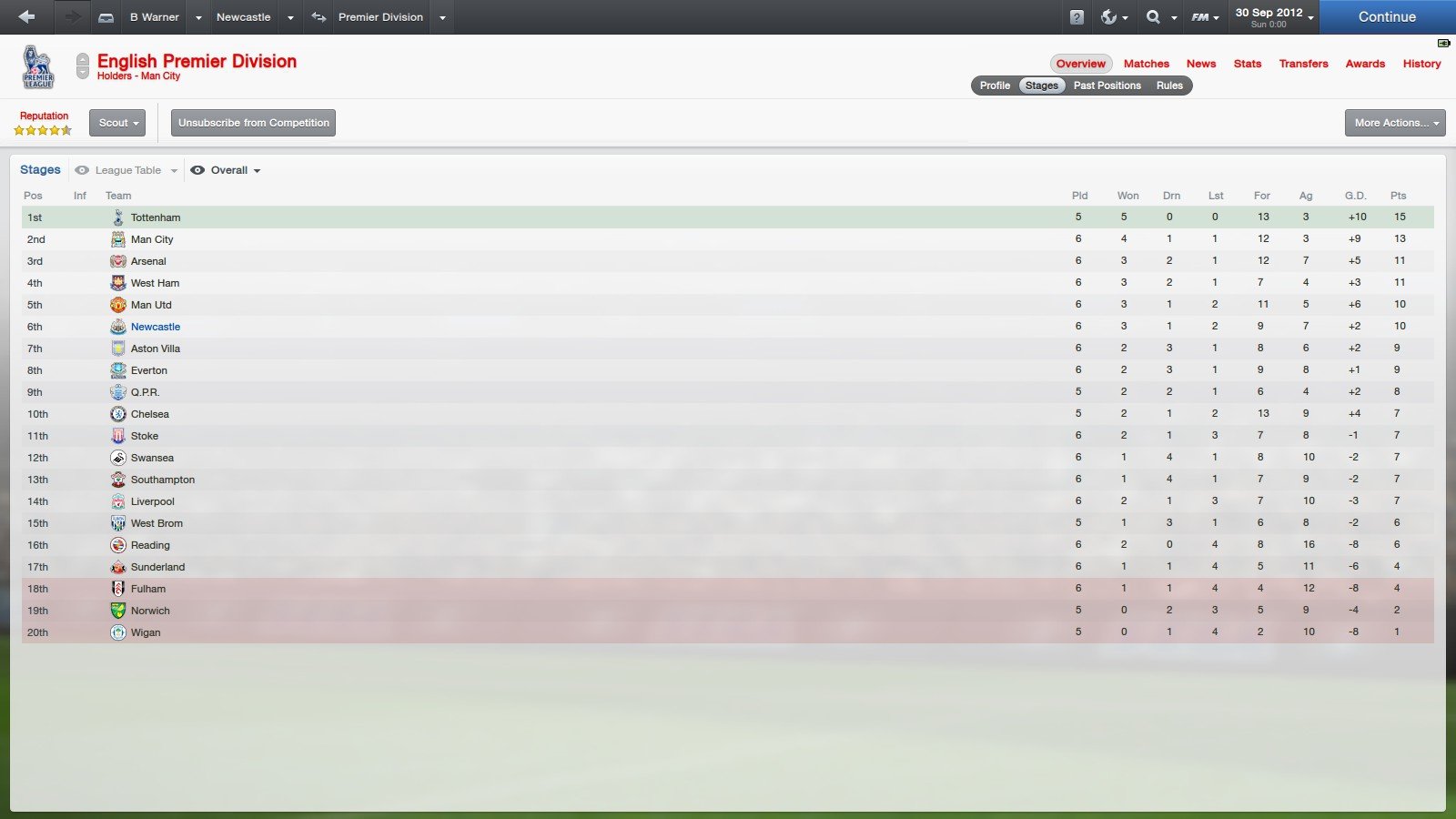 Dropped down to sixth in the table, although with the fixtures we had, it's to be expected.
Login to Quote

Blue
9 years
Some Screenshots
For Arvind (by request)
Demba Ba 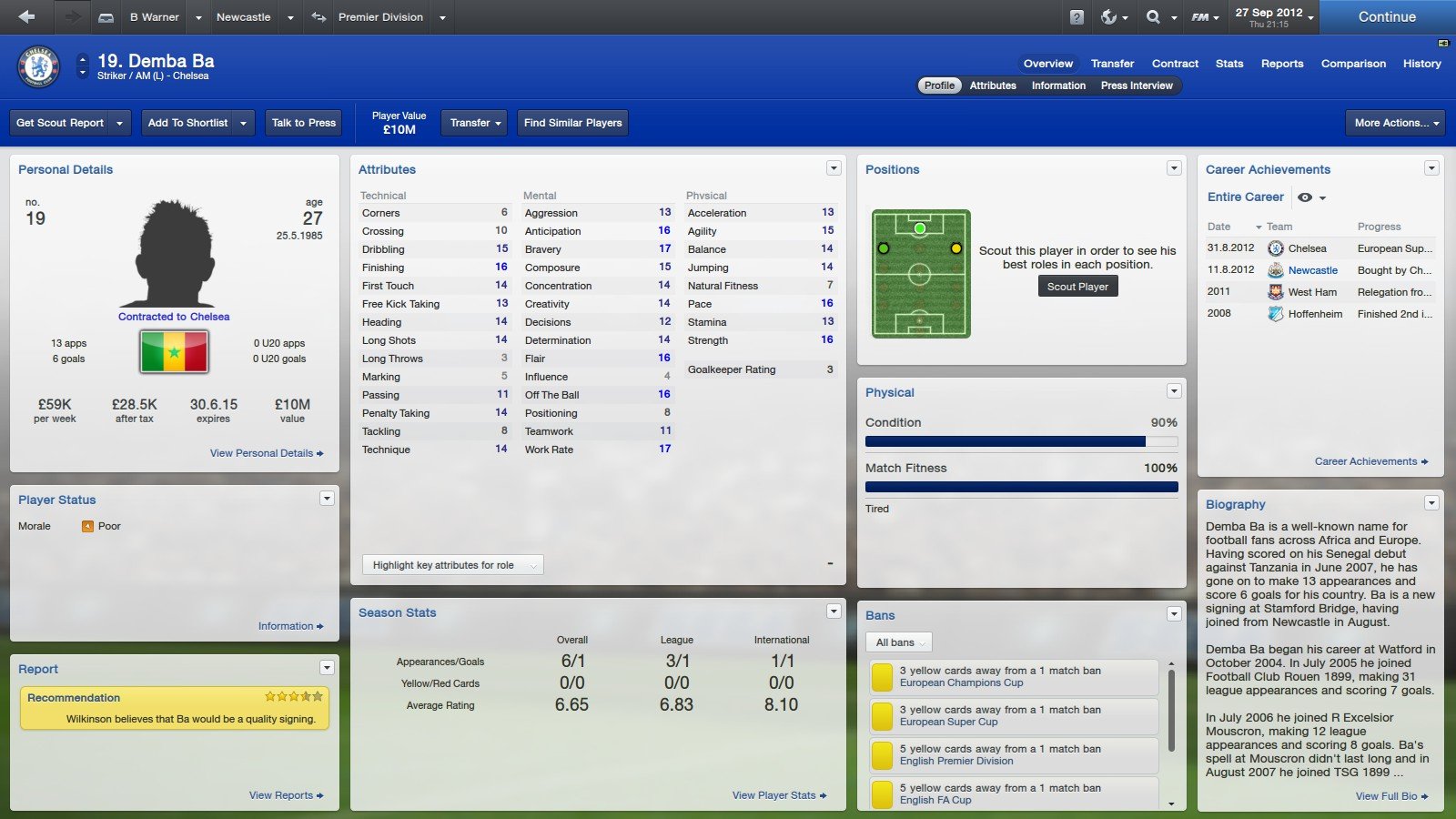 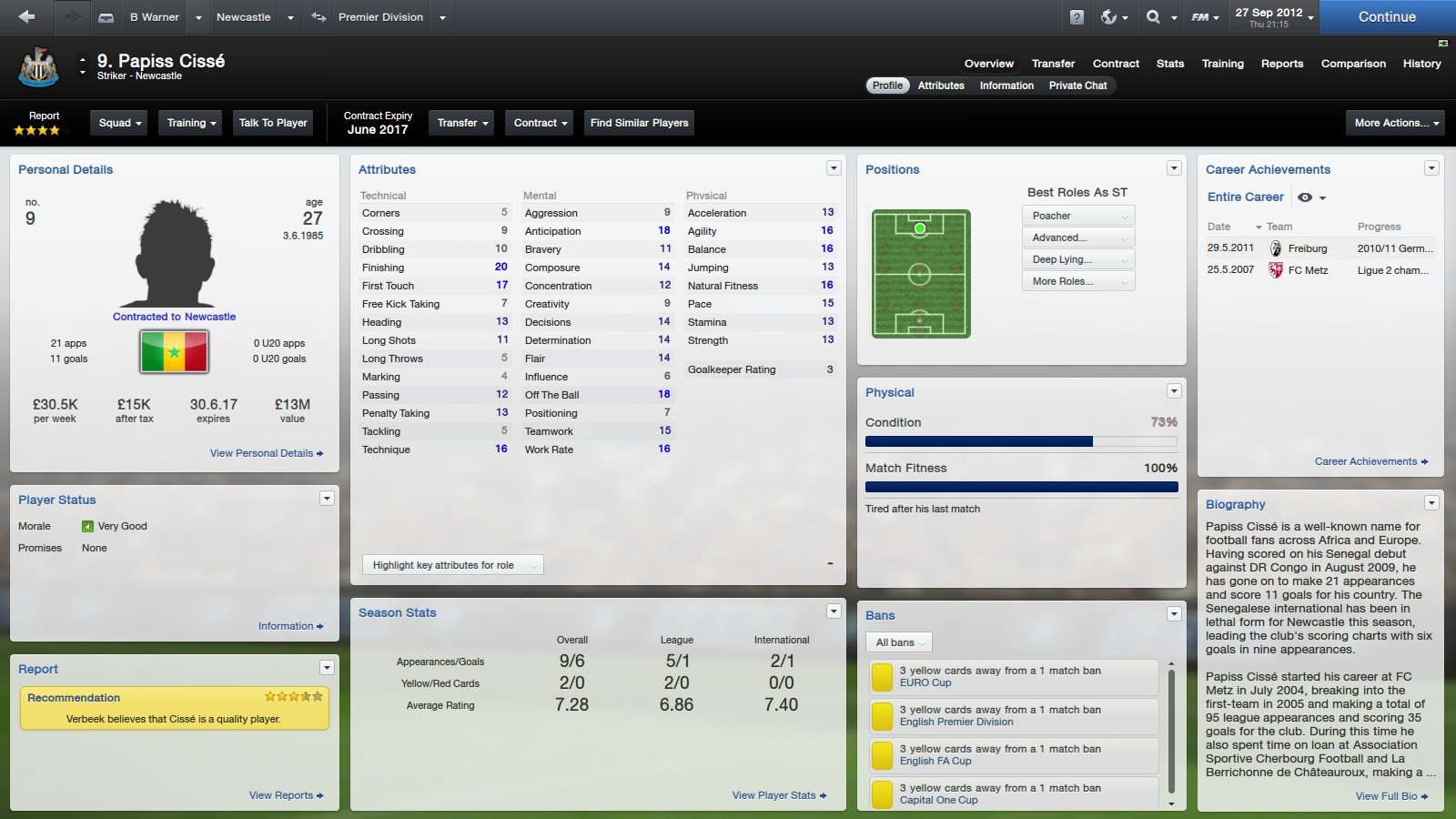 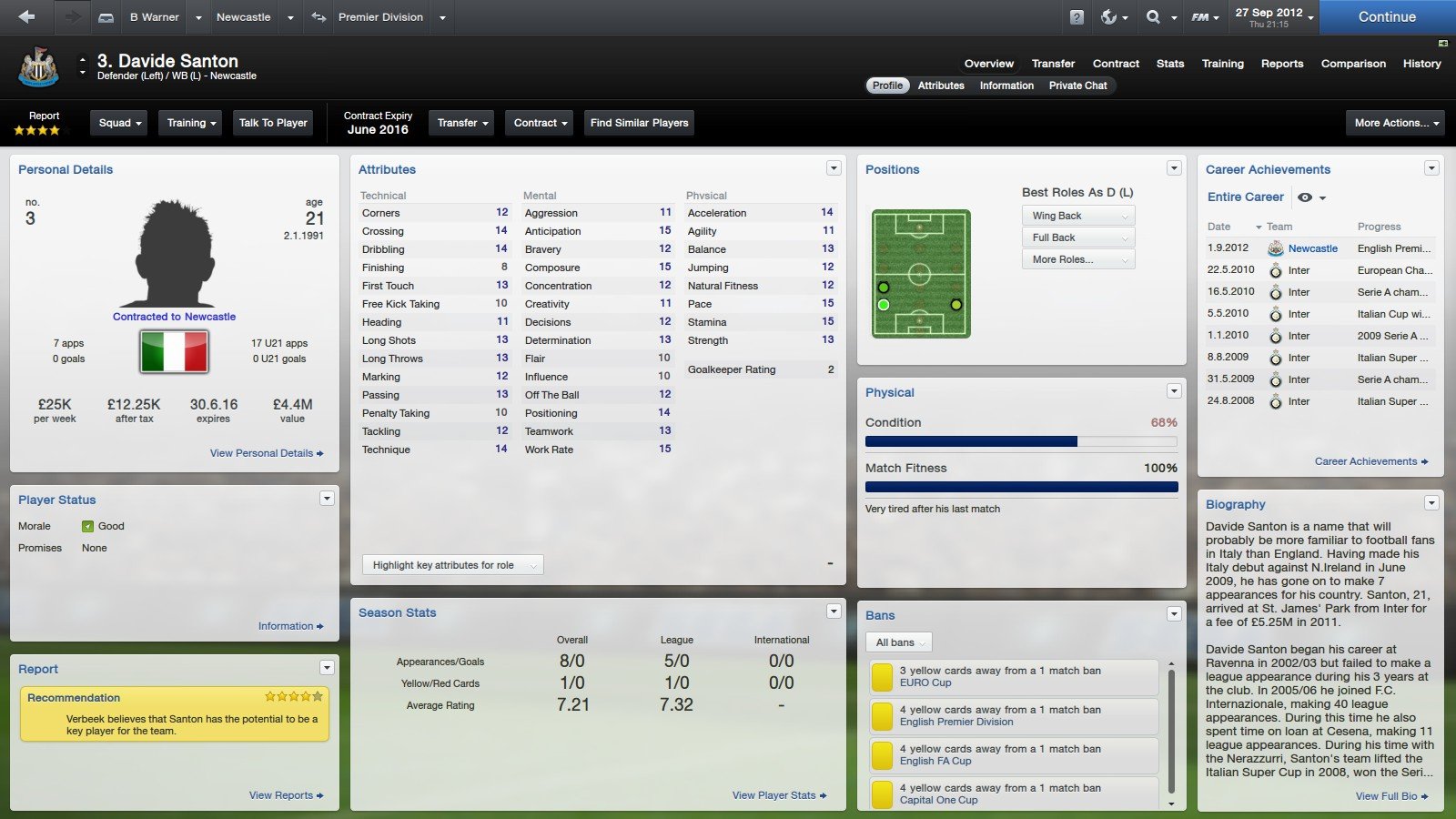 Look at this kid I found at Sevilla 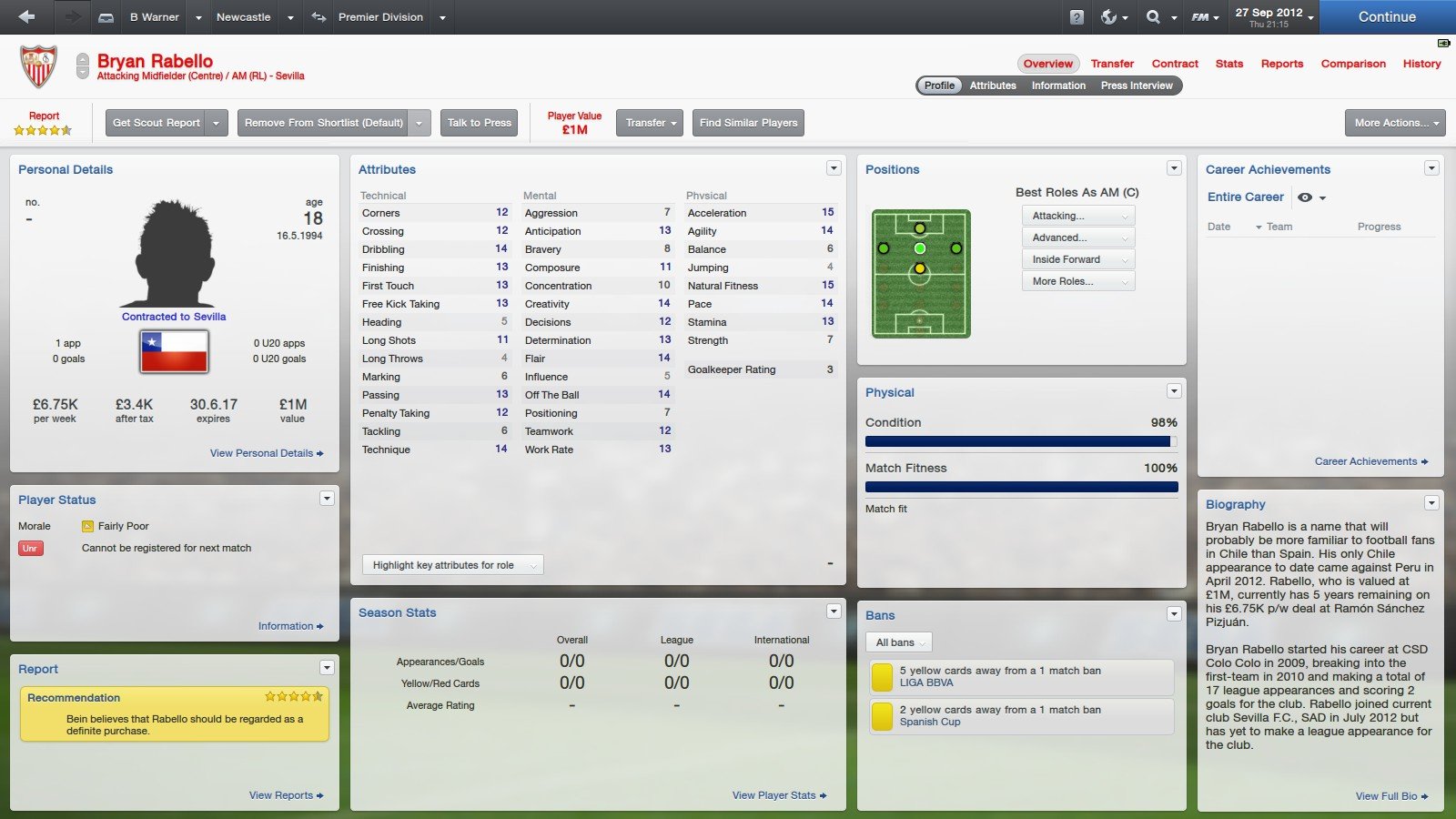 *secretly asking for a screen of Memphis Depay, including scoutreport :P*
Login to Quote

You are reading "Up With The Geordies".