Thank you very much, Rookie. I'm hoping you will follow this story till the end.
Login to Quote


Not a lot of season ticket holders, but larger number than I expected. This is going to help our finances. 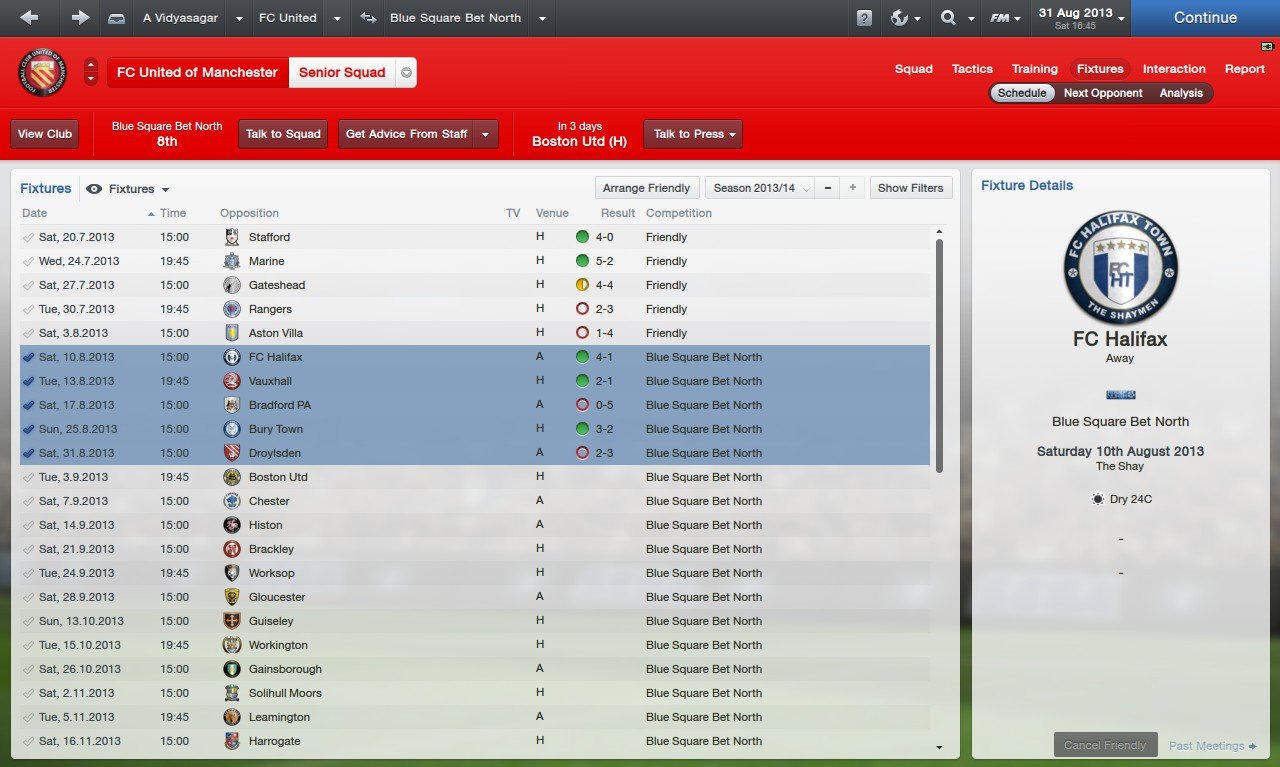 A couple of good early wins, but injuries to our key defenders and not deciding who my #1 goalkeeper is, has cost me big. That loss against Bradford hurt the fans as well, but we're still doing well in the league. 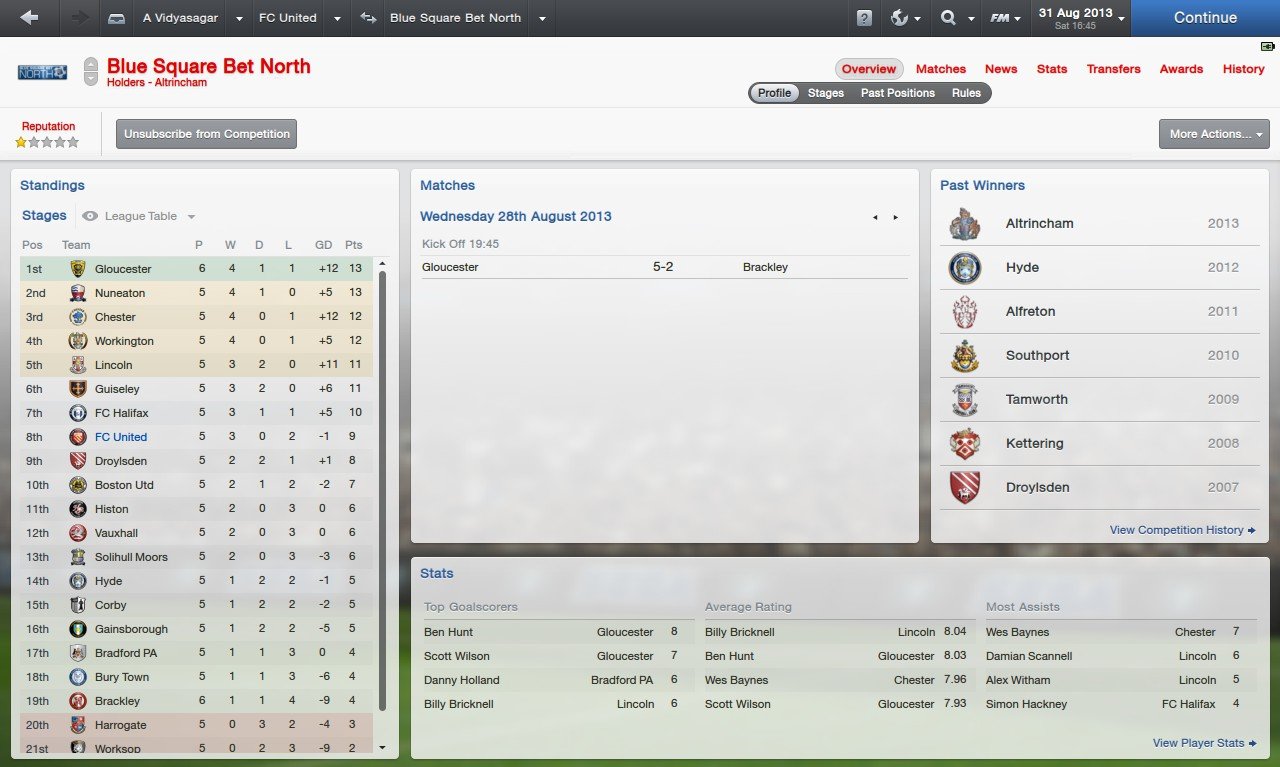 After our performance in August, and still £1,060 left in the wage kitty, I'm hoping for an automatic promotion spot from this season. Even we go through a bad patch during the busy part of the season, I think it is time to get better players, with longer contracts.

During this time, a ton of my players made their debuts, and performed well. 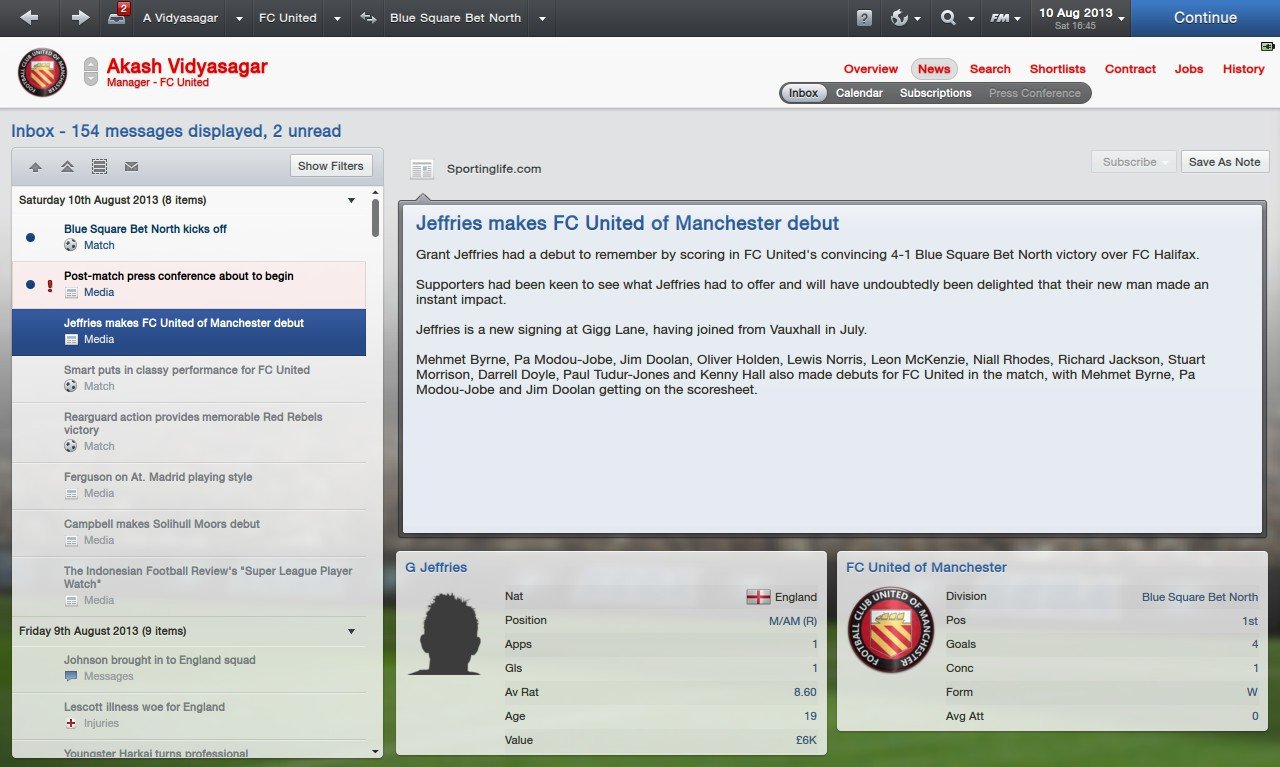 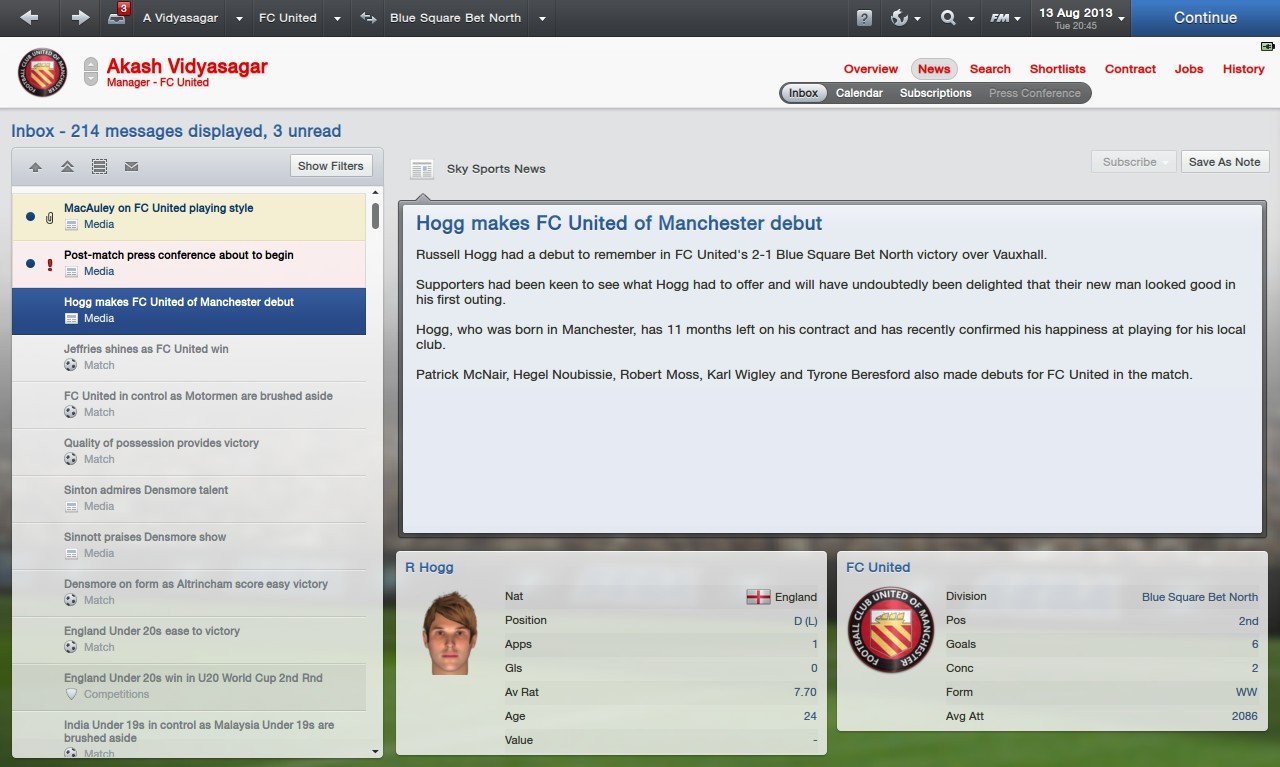 As I mentioned in one of the posts above, my coach Des Hamilton will be a class above everybody else, and looks like he wants to be. He will be studying for a Continental Class A License, which is great, but with it happening with the club's money, I'm not too happy. 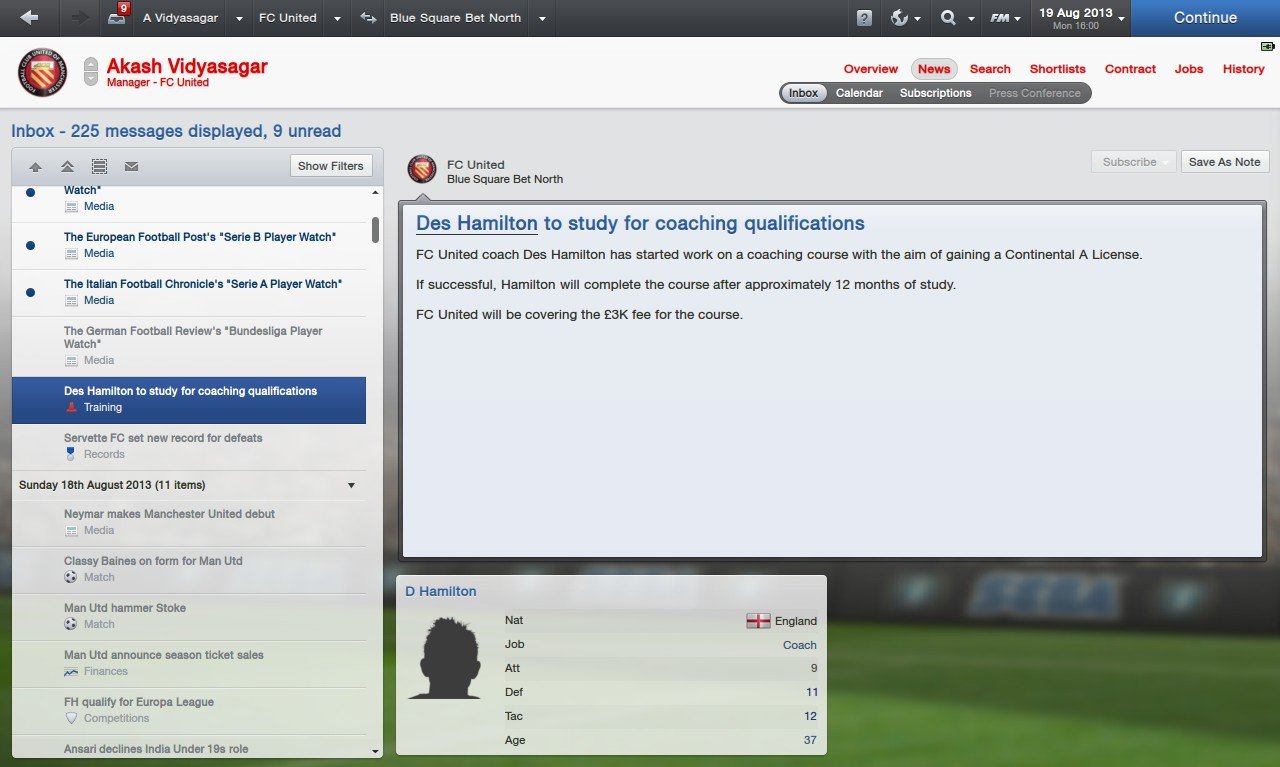 At the end of August, I found Ola Rabiu and Francis Zenaba in my scout's reports. Since they looked better than most of my players, I approached them to sign and they accepted contracts for less than half of what they initially wanted. I knew they were both from Africa and that they would require work permits, but when I saw their reports from a scout that has never been out of Great Britain, I was hopeful. However, soon, I got a message explaining to me that there would be decision made on the work permits in a couple of days time. I'm not holding my breath, because one of them has never played for his country, while the other has not played enough. 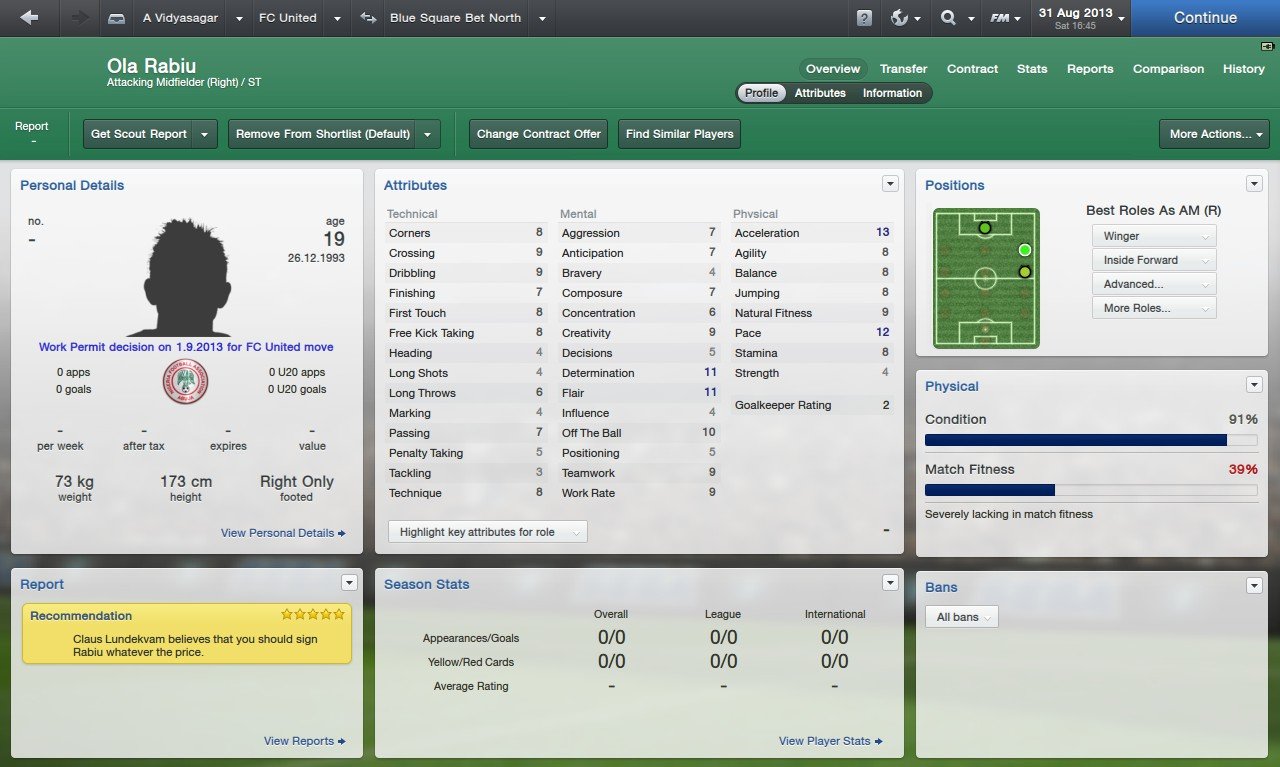 Kiwi
9 years
I'm not yet accustom to hanging out in the FM13 forums, but I see you have been hard at work. Best of luck and I will definitely be following....
Login to Quote

the pharoh
9 years
hi i love this story
a little bizzare request
can you send me the save for this game?
Login to Quote

Bizzare? This is the best compliment you can get as someone writing a story on an FM fansite..although, I would've expected it to come when I've made some progress in the game

I've moved a little further along, signed more players, so let me just update the remaining part, and I'll send over the save after that.
Thanks for the comment, Pharoh


Having failed to keep a clean sheet in any of our competitive matches in August, topped off with a humiliating 5-0 loss to Bradford PA, which was their only win in league, I've felt the need to strengthen my defensive and core midfield. 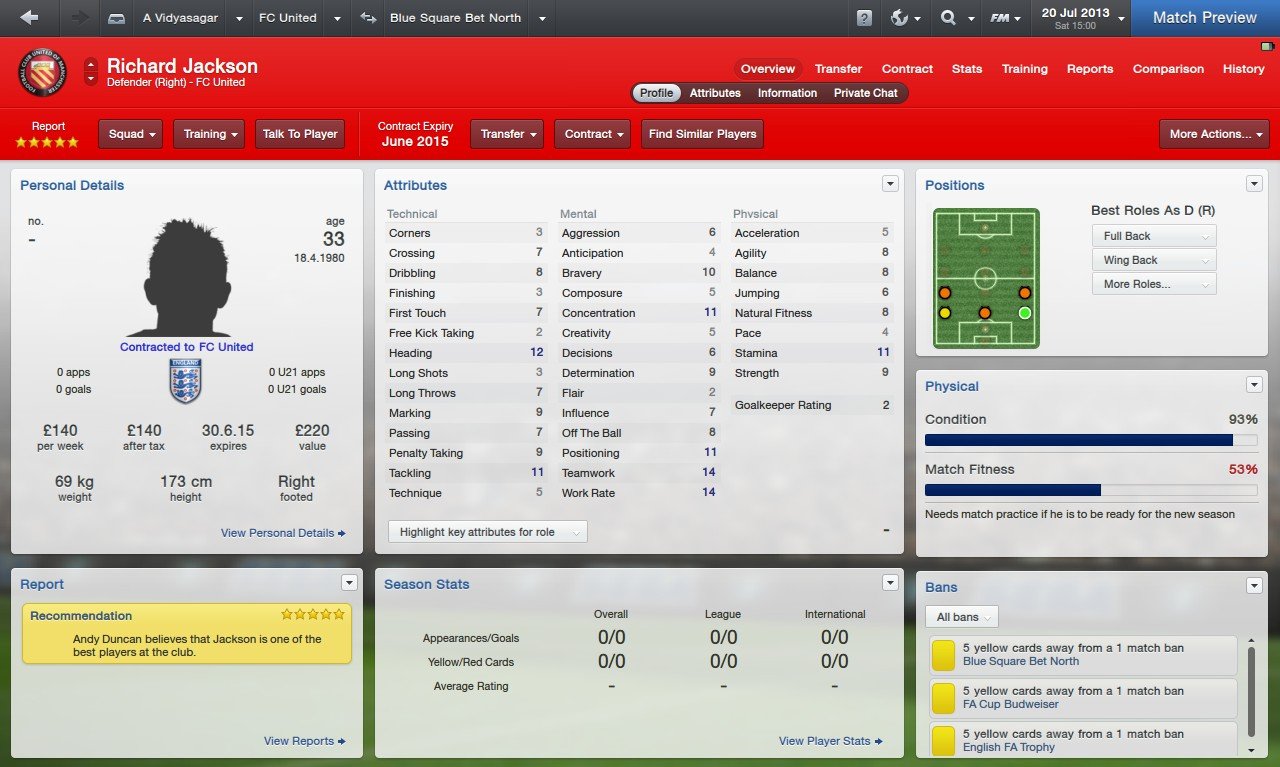 Looks like my coaches are taking me for granted. I have no interest in paying for his continental license, but doesn't look like I have a choice.


As soon as September begins, I get a message regarding the FA Cup 2nd Qualifying Round Draw. This is when I'm actually glad I've made a total of 14 signings so far. Hopeful of a long cup run, the fixture congestion will demand some players being rested and really, I cannot afford to lose any matches because my best players aren't playing.


http://i709.photobucket.com/albums/ww98/akashrv/Screenshot2012-10-23at125204AM.png
Hyde are a good side in the same league as us, and we'll have to treat this as any other game to beat them. A win at this stage is more about the money than the fame. We aren't going to go far in the main rounds, but the further we go, the more financially beneficial the cup is.

September was a tough month, with a couple of matches against teams from the top 5 and a couple against the bottom 5 as well. We did exceptionally well, winning all of our games except against, at that instant, league leaders Chester. 5 wins out of 6 means we've moved up the league table, but still a long time and lots of tough matches away to promise automatic promotion.
In the next month, I would like to convert those losses into draws to get a couple of extra points.

http://i709.photobucket.com/albums/ww98/akashrv/Screenshot2012-10-23at24728AM.png
Well, with wages being under control, but still our biggest expenditure, I can't do anything to change the situation.
Login to Quote

Arvind
9 years
I voted "Does it matter, I'm not reading anyway" because that option seemed lonely without any votes.

But I will be reading. xD
Login to Quote

Kiwi
9 years
I'm still sourcing prices from *reputable* stores in the area, never fear I learned my lesson with ebay and FM12.

Akash
9 years
Before I continue on with the update, I'll be honest - I actually thought about suspending/stopping this save after the beta kept shutting off every time during half-time. Since then, I've been saving after every game, and even though I haven't "rage-quit" yet, I feel I am very close to cheating. I have my monthly rolling saves on, so I won't be saving game-to-game now on unless there are 6-7 games in a month.

Things are looking up!

With a minimum expectation of the board to reach the Fourth Qualifying Round for the FA Cup, I was a little worried going into the match against Hyde, especially because they were on a five-game unbeaten streak going into this match. Their strikers were on fire - scoring 3, 4, 2, 3, 2 goals during this streak. With the match stuck at 2-2 and seemingly headed for a replay, Lewis Norris volleyed in a Grant Jeffries corner. 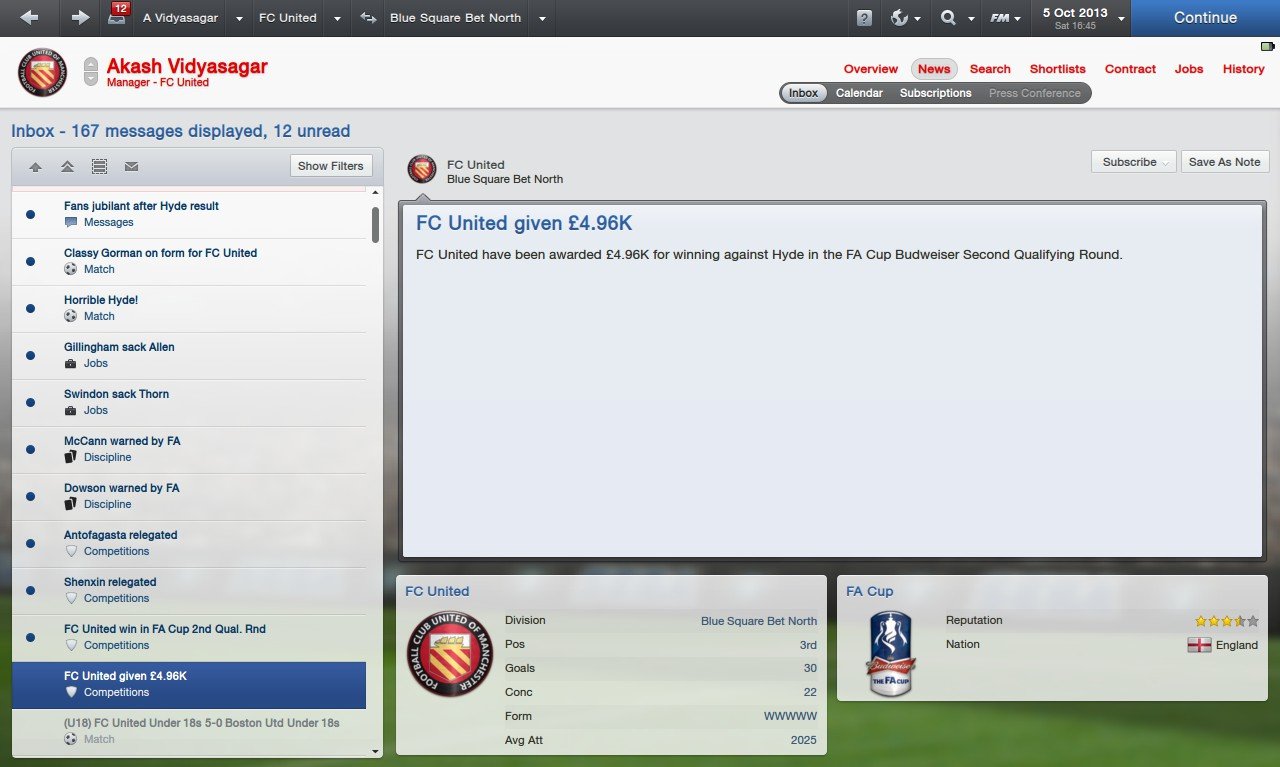 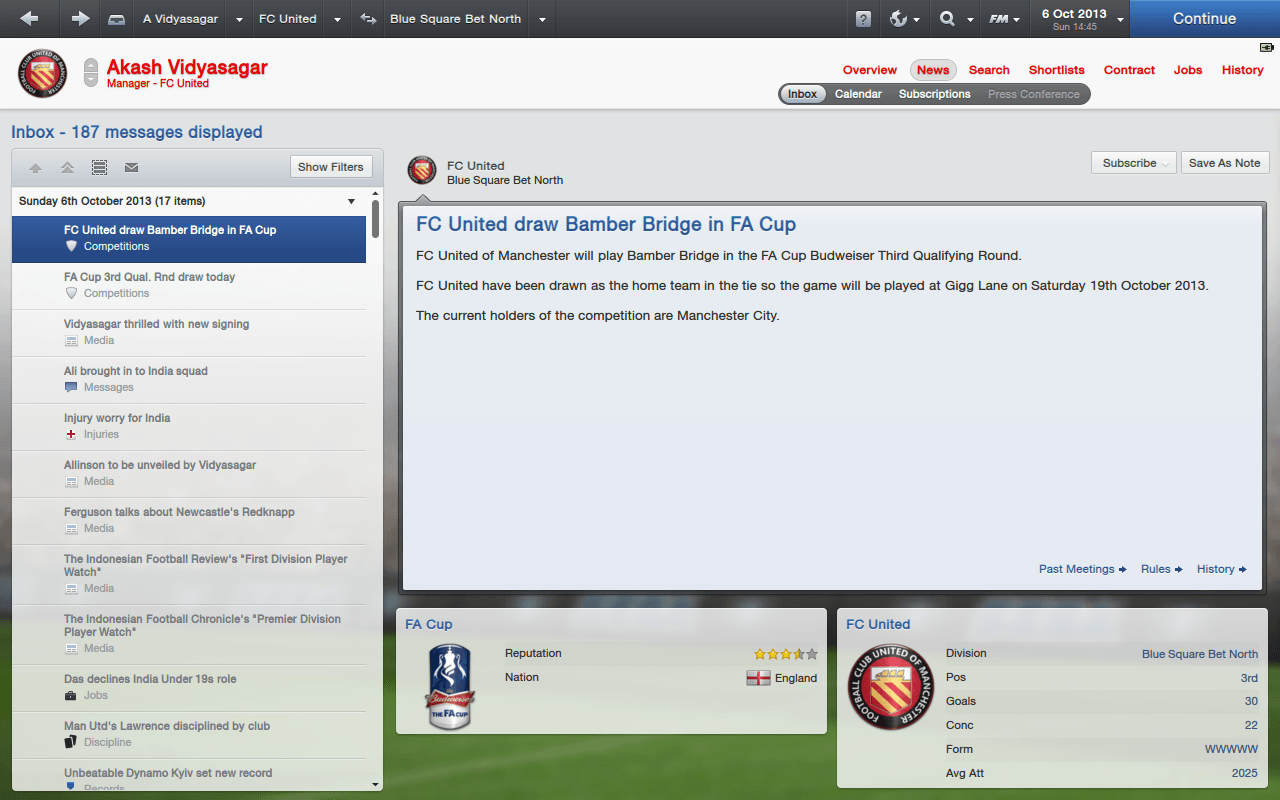 I had never even heard of Bamber Bridge. On inspection, they seem to be two divisions below us, but a comprehensive victory against Halifax means anything could happen.
Thankfully, Bamber Bridge provided no shocks, and FC United won comfortably by a three goal margin. 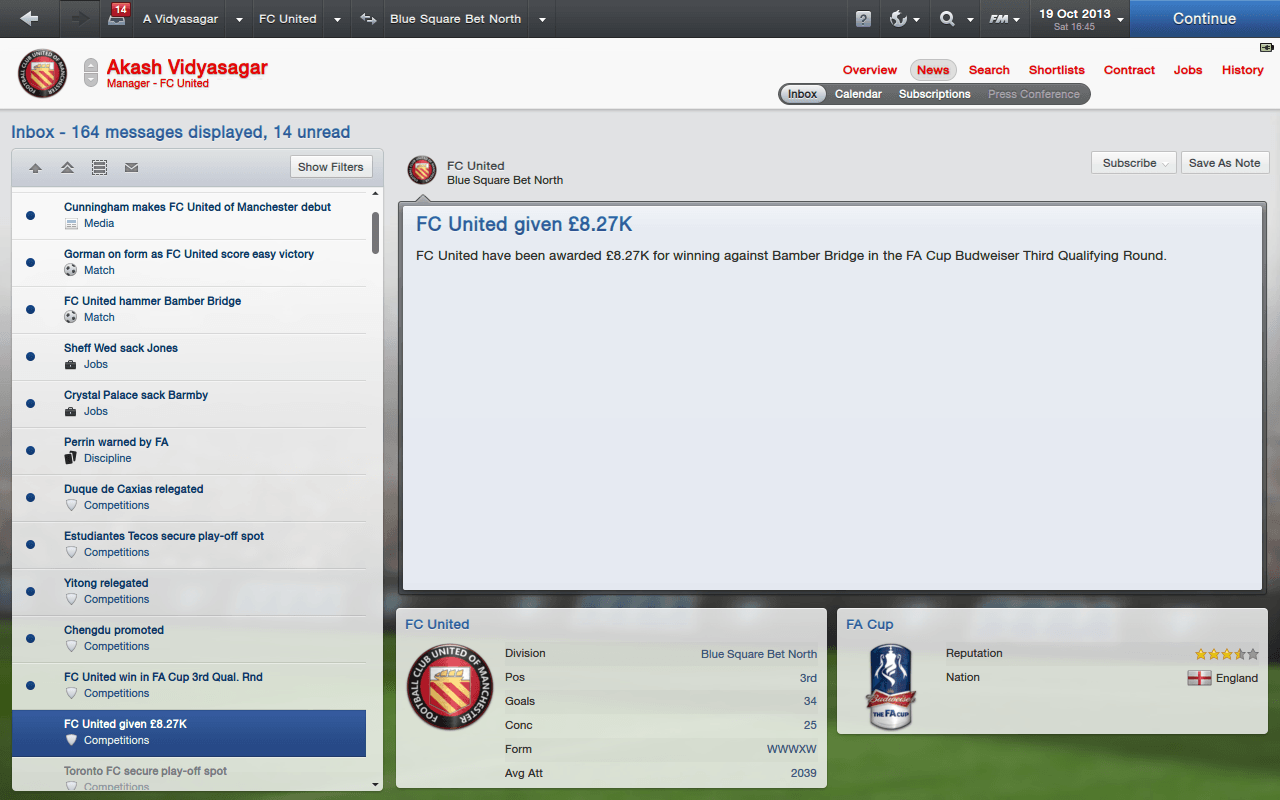 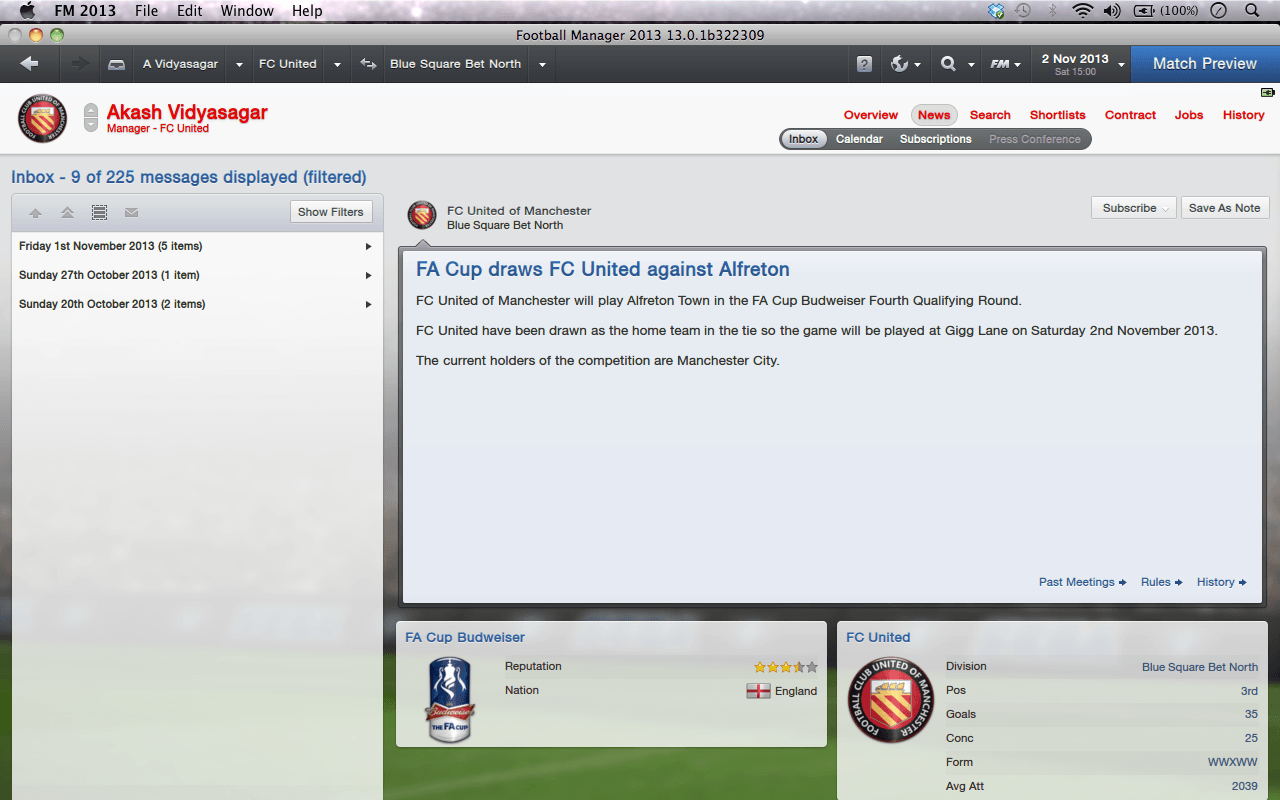 Alfreton Town are in the BSP, and a very tough team to beat - but a large kitty awaits us if we get through them, so I'll be pulling out all the stops, even if it means changing up the entire tactic. Last month, I said I would like to like to turn my defeats into draws, and that is what our team achieved this month. We probably should've won against Workington, but we never looked like we deserved it and we were lucky to draw against them. Our position still remains in the playoff spots, but a mere two points away from the league leaders. I'm tempted to start working towards an automatic promotion spot, but I'll wait until January before changing my expectations. 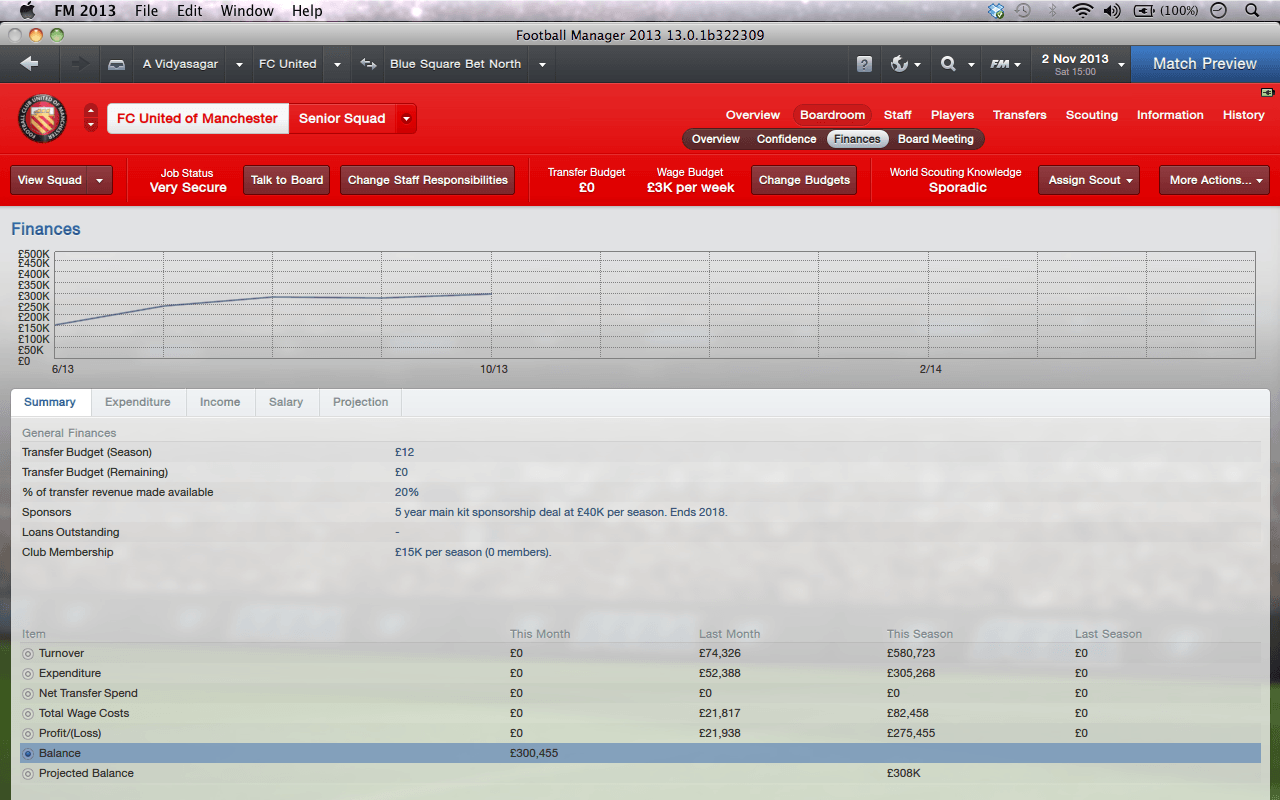 A profit of £17k, largely thanks to our wins in the FA Cup Qualifying Rounds.

They haven't even been at the club for more than two months but Adeyinka Cole and Modou-Jobe have already become concerned about the lack of first-team football. As I don't need them and they came for free, I'm going to let them go for free at the end of the season.
Login to Quote

But I will be reading. xD

If you hadn't voted for it, I would've

xXBlueXx
9 years
You forgot an important option in your poll Akash, it reads: 'Never sacked! Retired as a club legend instead!' Thats my prediction

All the best! Will be reading!
Login to Quote 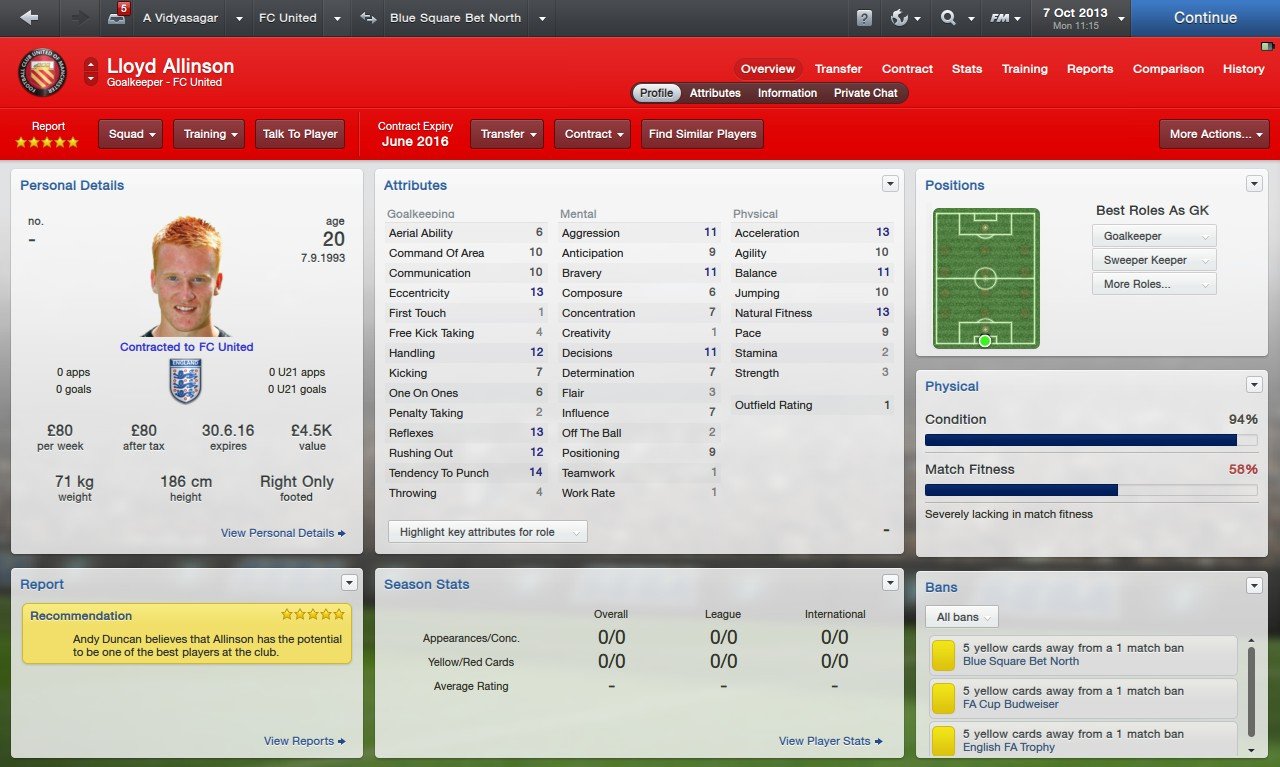 Allinson will be my first-choice goalkeeper very soon, probably by January, if he keeps developing well in training. Coupe, on the other hand, will be more of a backup to my defenders - and will replace them if they aren't up to scratch.
Login to Quote

If you have someone visiting idea, you can have it for less than £10

The finances, I can't do anything about, because the wages are in check. If they were to create a big problem in the future, I'll just have to play friendlies when I'm supposed to be giving my players a break. But thankfully, my cup run has allowed me to not resort to such drastic measures.

All the best! Will be reading!

I'll be surprised if I'm not sacked by 2020, to be honest. The jump from BSP to League 2, and League to the Championship is really difficult and usually requires immense patience, which I don't have. I'm probably going to make some drastic buy very soon which is going to get me sacked :\
Thanks for the comment! I hope to keep you interested in the story