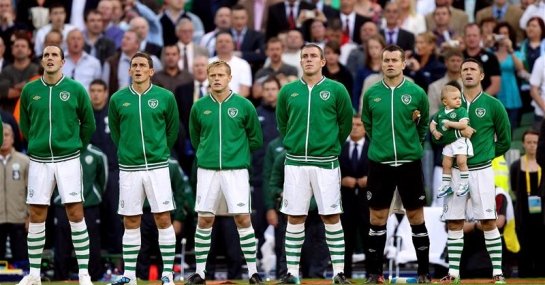 My Ireland record was pretty untarnished so far. Two draws, one win, and the win was in a competition too. No losses so far, and I plan to keep it that way. 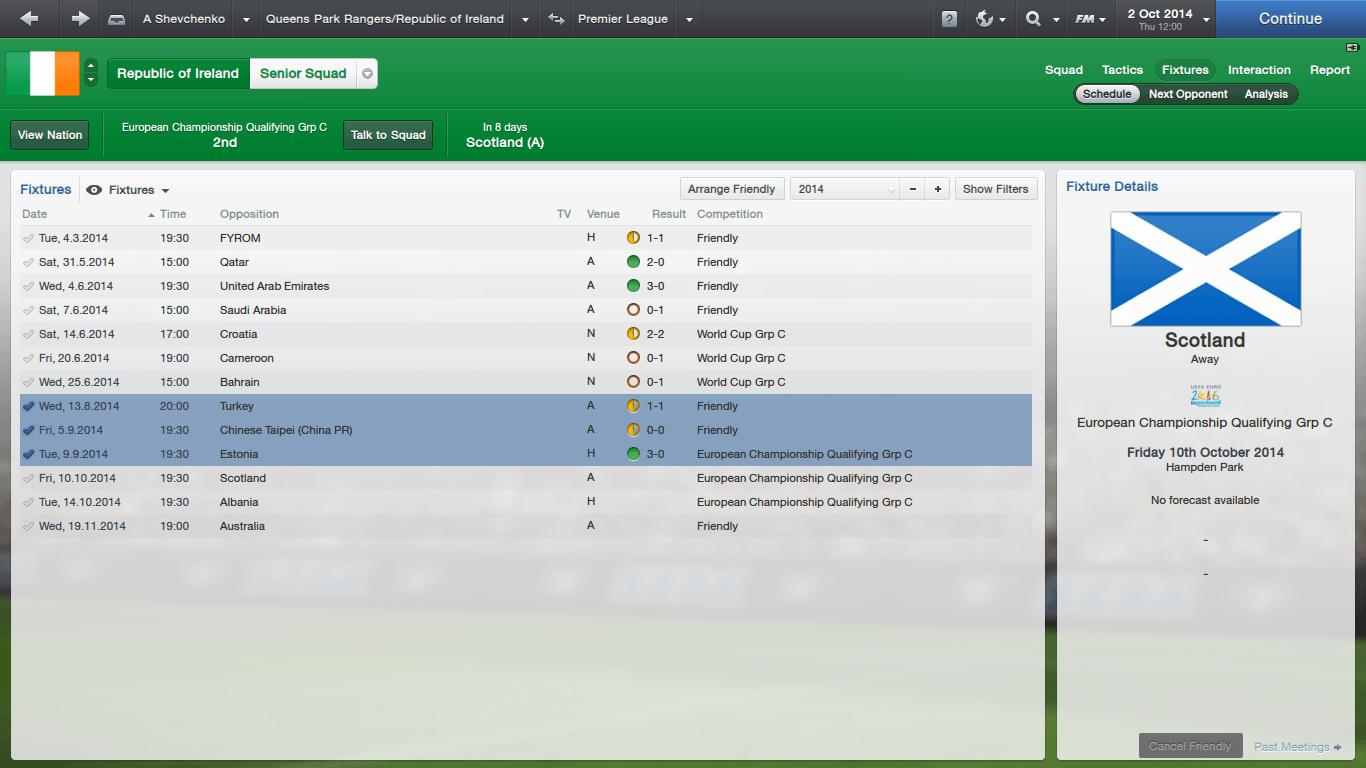 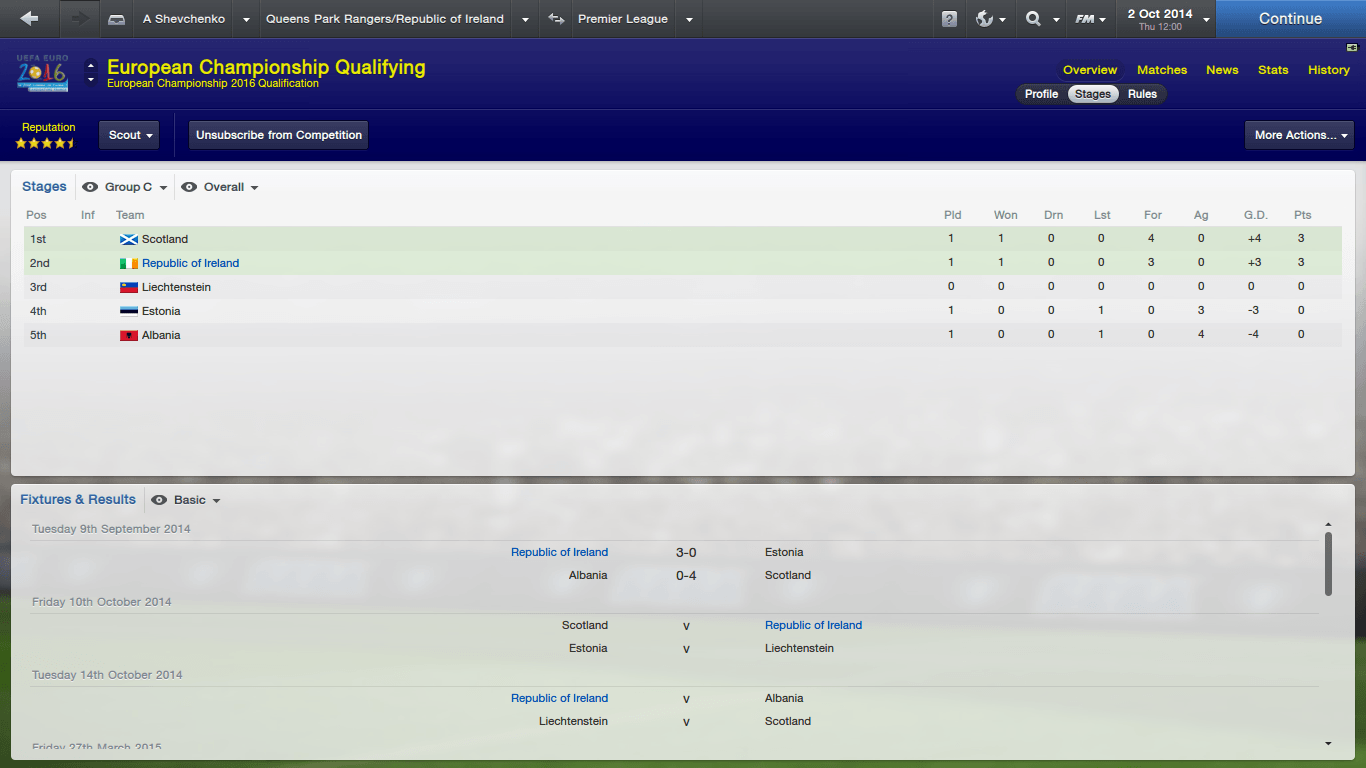 Nedum Onuoha has been handed his first international cap for England by boss Slaven Bilic. 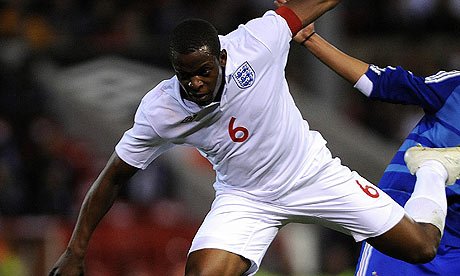 The 27-year-old made his senior England debut against the United States yesterday, coming on as a half-time substitute for Chris Smalling to partner Ryan Shawcross in defense.

Queens Park Rangers defender Onuoha, who moved to Loftus Road in January 2012 for just 3 million after falling out of favour at boyhood club Manchester City, has been turned into a brilliant defensive rock by Andriy Shevchenko. His impressive performances for the London club had failed to catch the eye of previous boss Roy Hodgson, but Bilic certainly didn't make the same mistake and named Onuoha in an England squad for the first time last week.

"I am very grateful," an emotional Onuoha told Sky Sports. "To both Slaven and Andriy, they both had the faith in me that led me to what I am today. Without Andriy's guidance, I would not have been able to be so successful at Queens Park Rangers, and without that, Slaven would never have given me one thought. I am so proud to be Nedum Onuoha." 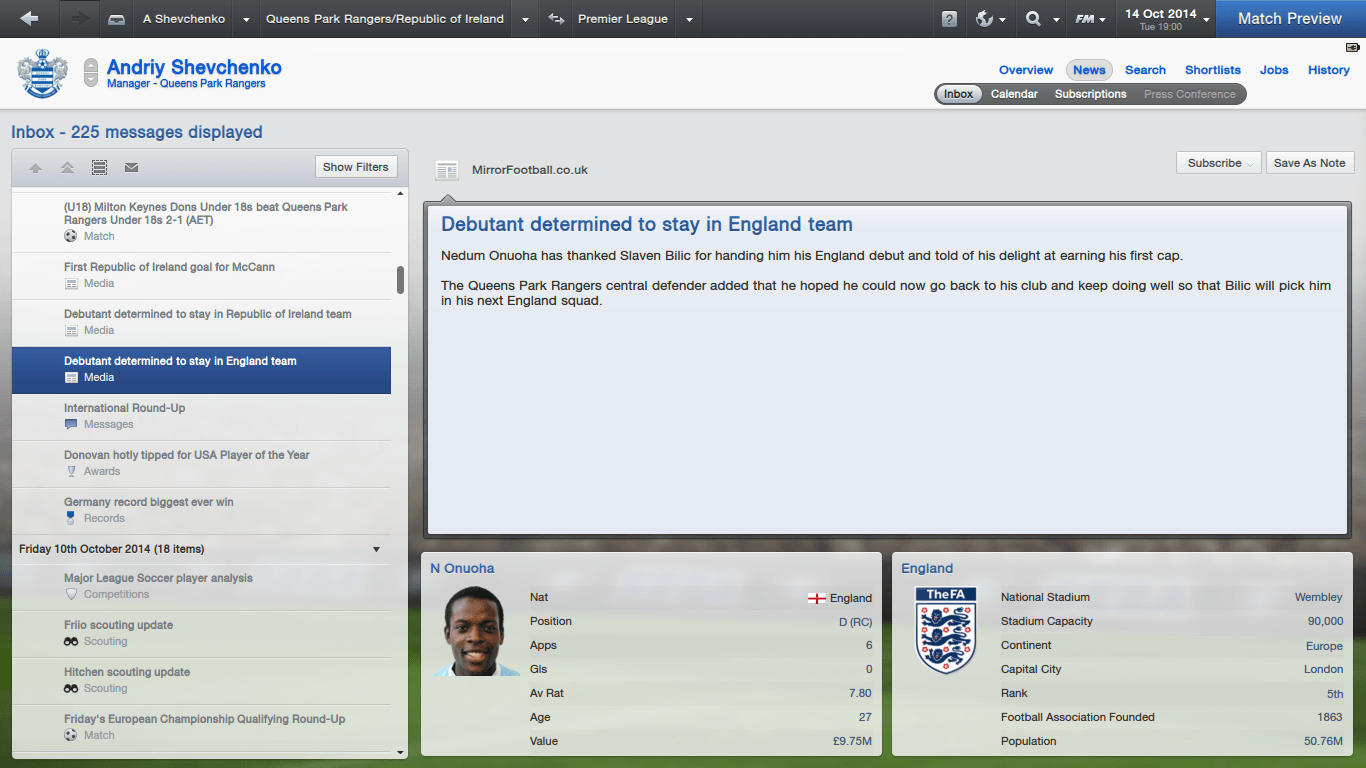 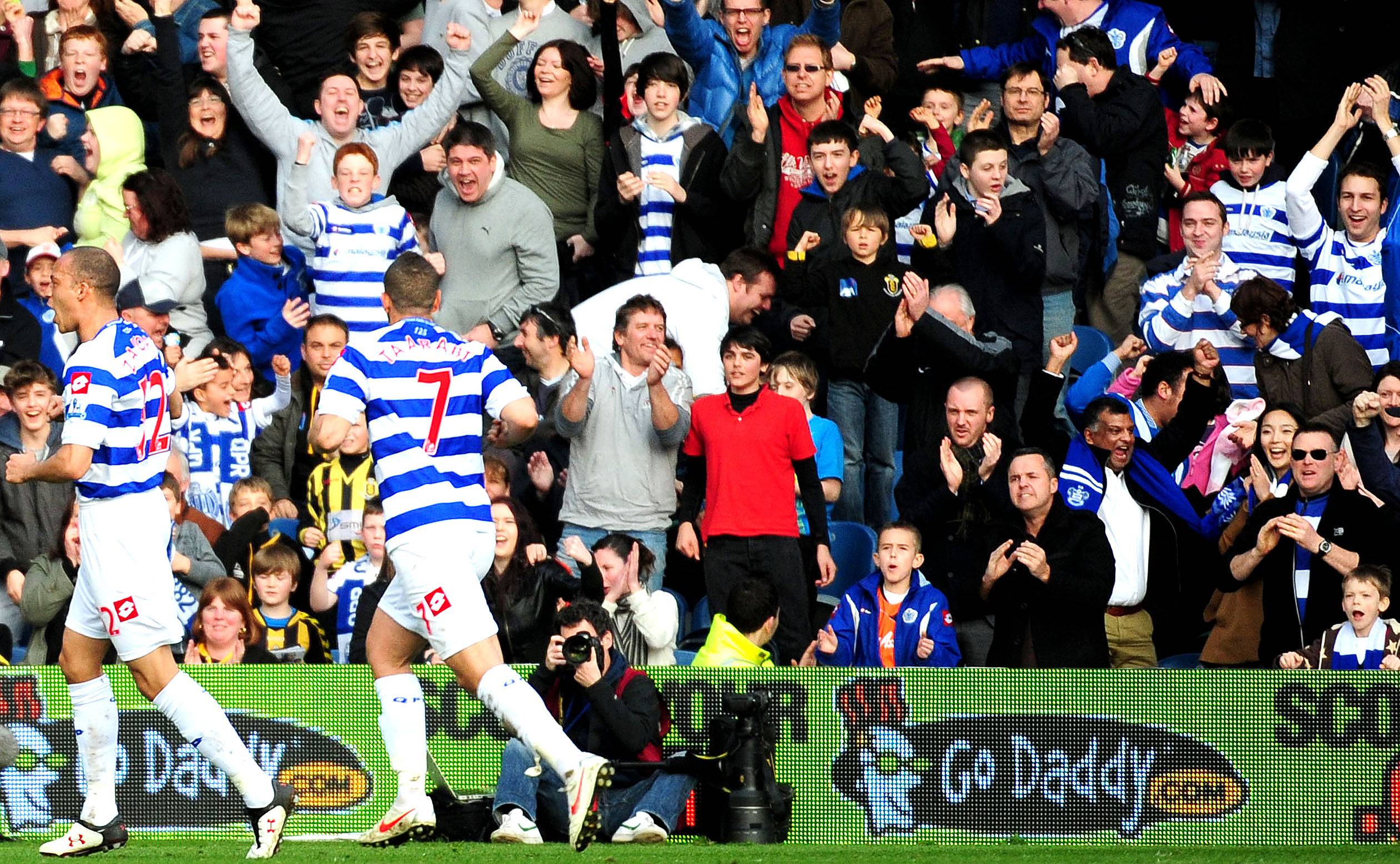 Our no-defeats run this season has been halted by Manchester United. We fought back hard, but eventually succumbed to a 3-2 loss. 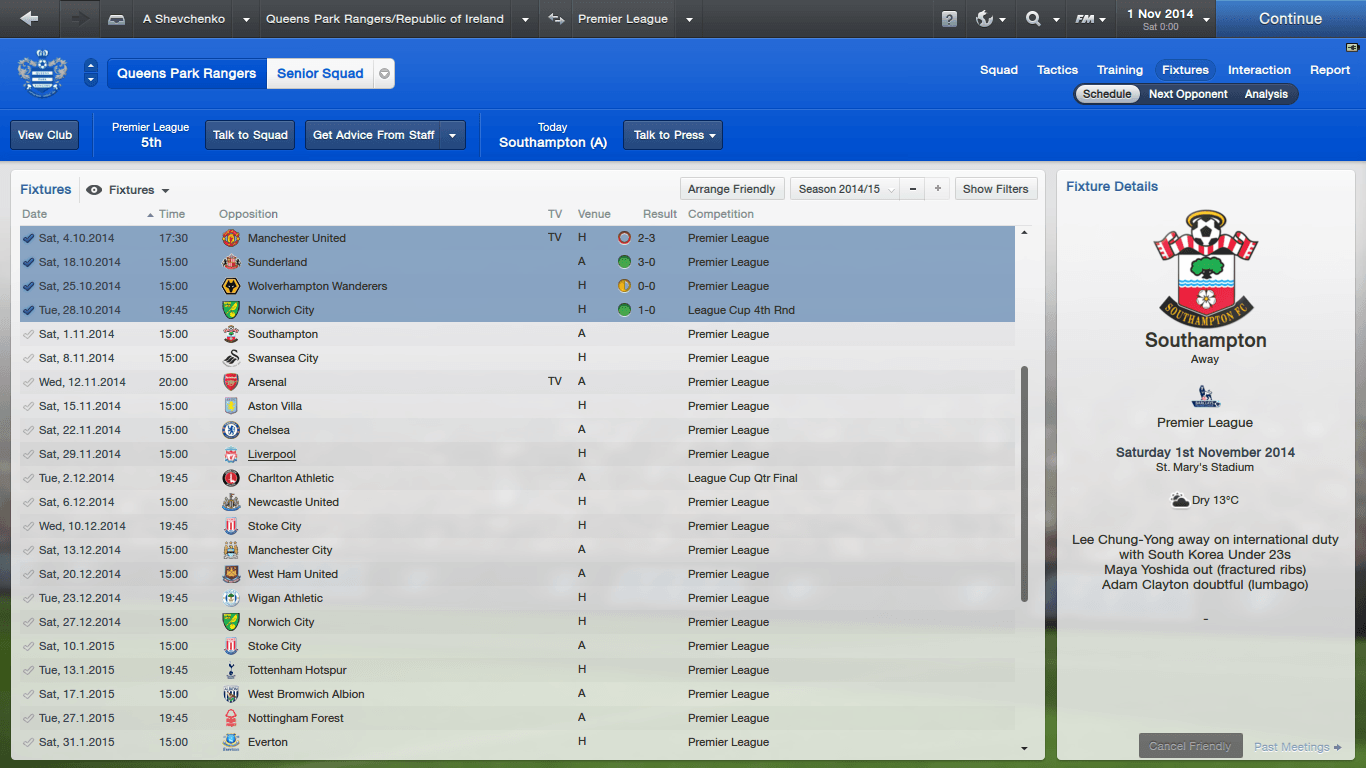 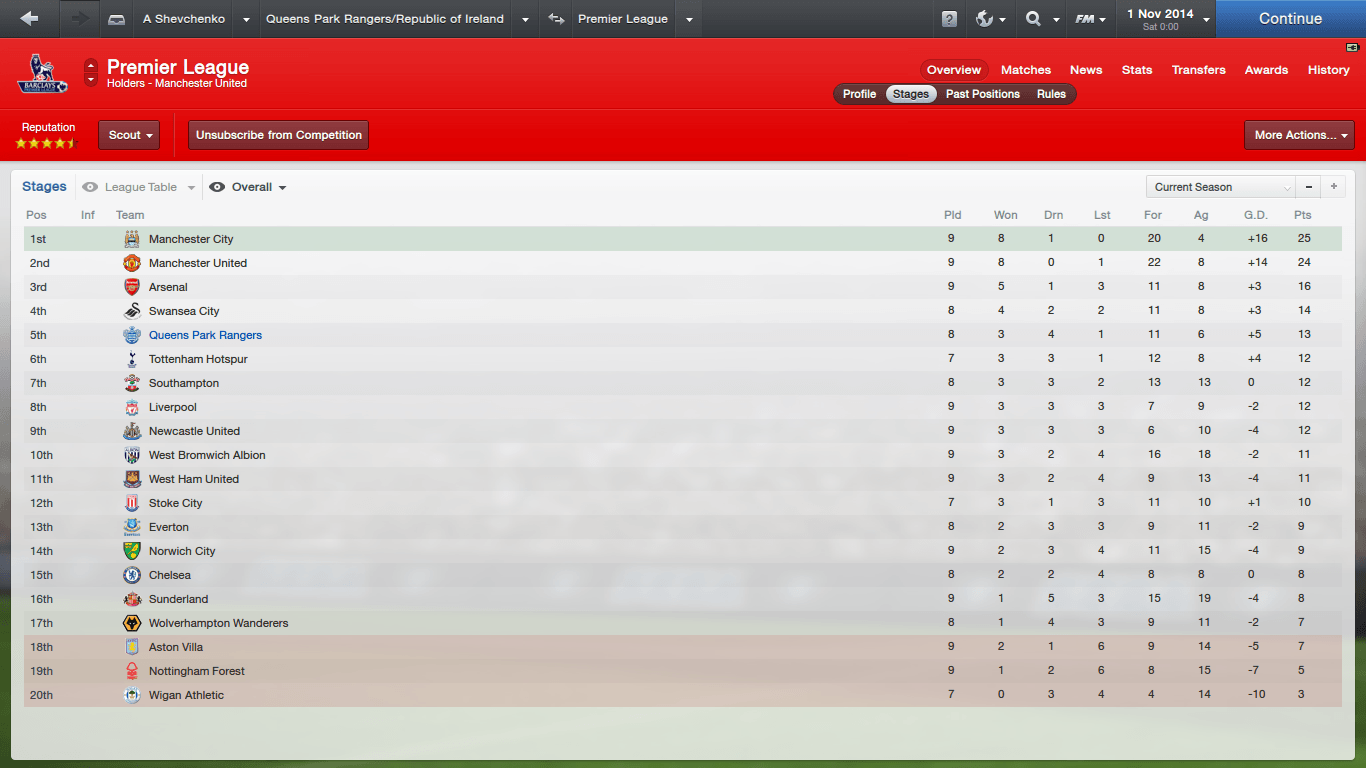 All my summer signings had not looked like flops so far. Clint Dempsey was the standout. The American was brilliant, and showed a keen eye for goal. Although he had also shown obvious signs of aging, the forward was still very much a good player, and I am starting to think about bringing him in permanently.

QPR Player of the Month 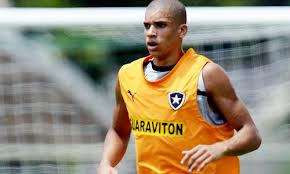 Also won the October Young Player of the Month Award. Words cannot describe how awesome this little Brazilian is.
Login to Quote

November: The Climb Down 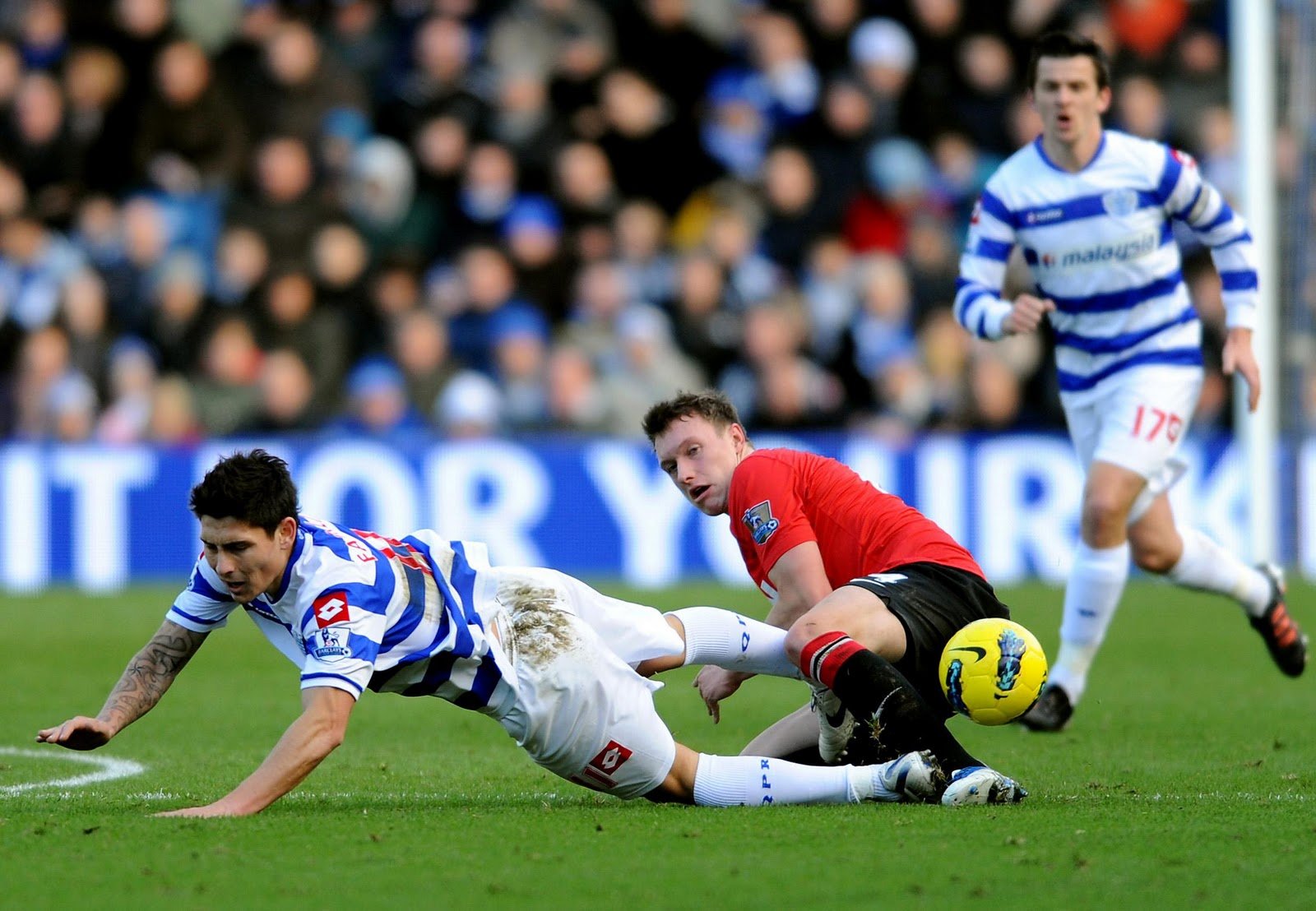 "Well, it seems like we have suffered a hit in our season," Mark commented. "Just like last season."

I shook my head. "We have to switch things up fast. The media are already predicting we will head into a relegation dogfight if our form continues, and they may be right, for once." 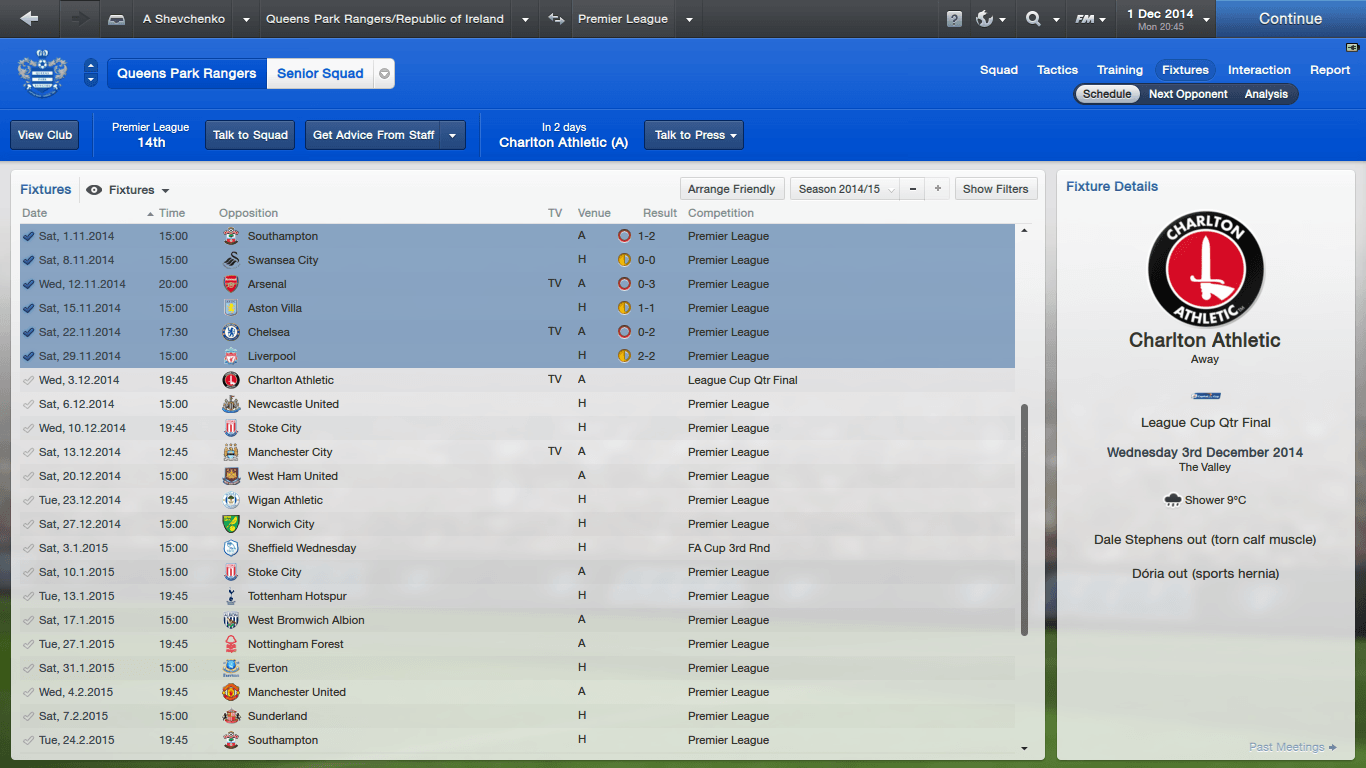 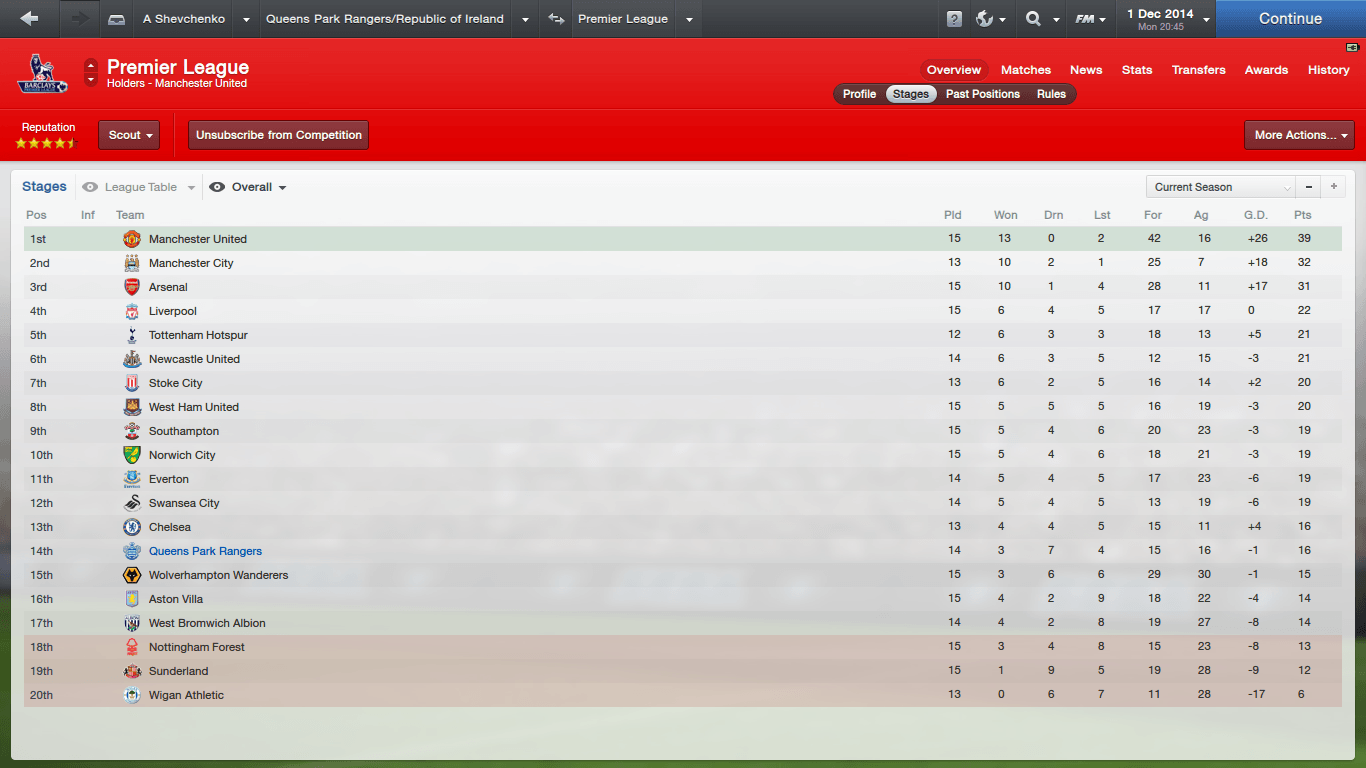 "Yes, that was rather unfortunate," I grunted.

QPR Player of the Month 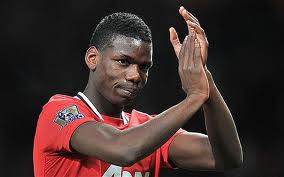 The Frenchman has not made a single mistake this month and is slowly forcing his way into the first team. He has been rather consistent and grabbing him on a free transfer has been looking like a total bargain.

"Yes, he has," I agreed. "Now I am having regrets about not accepting that bid from Southampton for Esteban Granero in the summer..."
Login to Quote 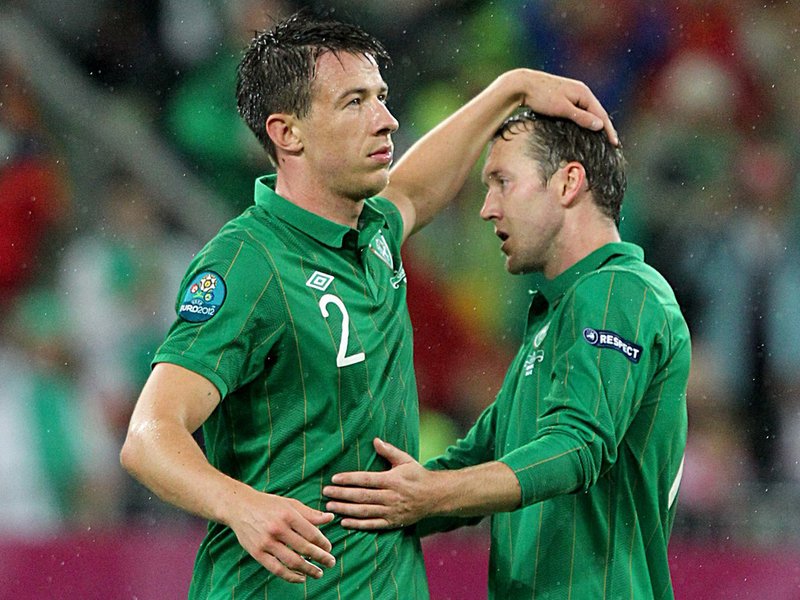 My first loss as Ireland manager is a harsh 3-1 thrashing by Scotland. We follow up by narrow 1-0 wins against Albania and Australia. 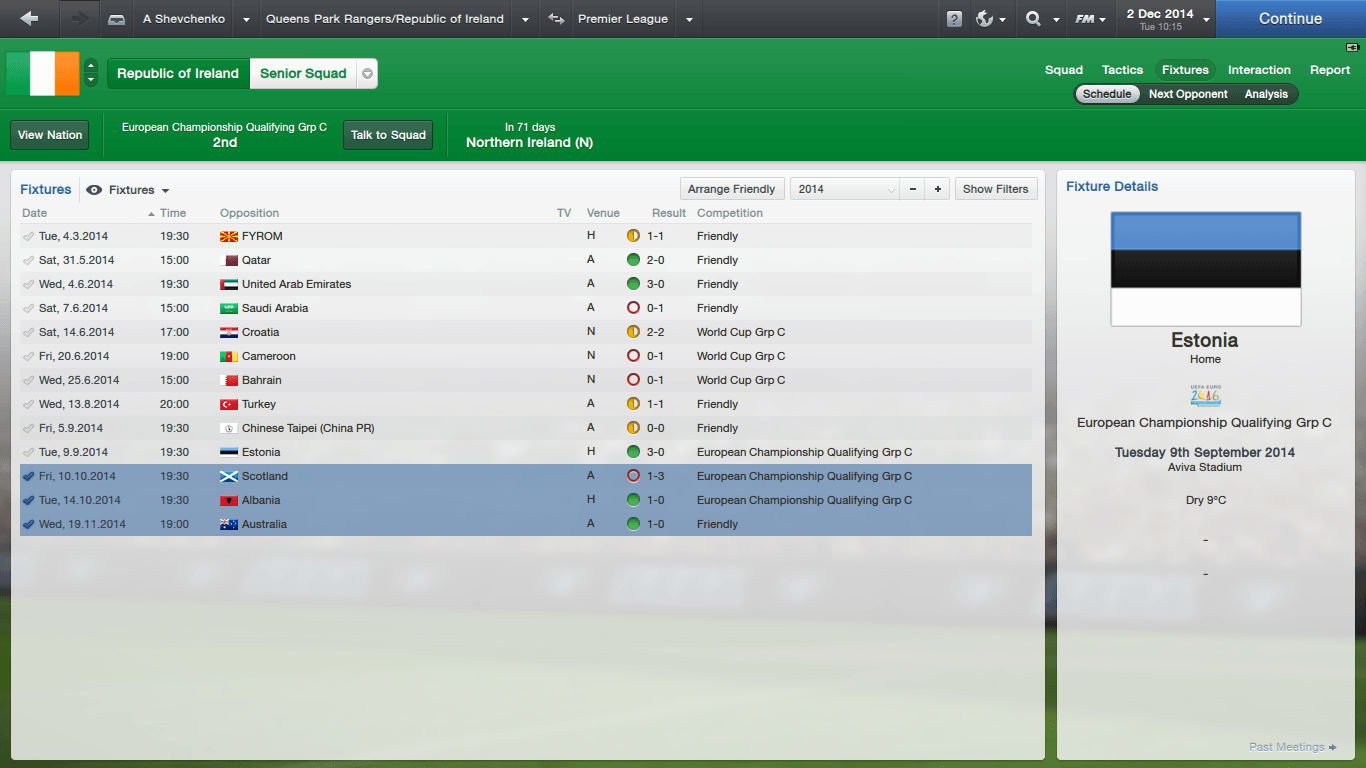 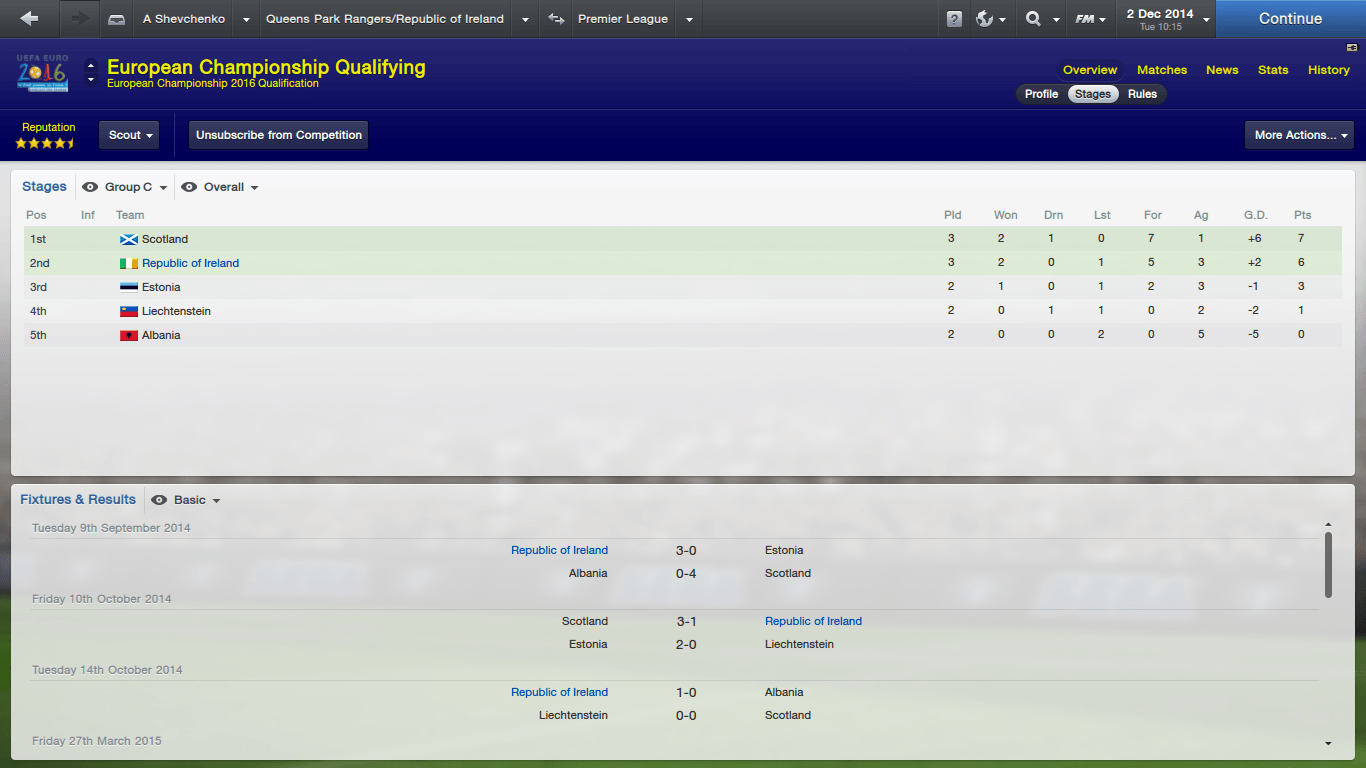 or.dabool
8 years
PL-Wise it wasn't the best of times for QPR, but Ireland sure shook up after the lose to win twice

The FM Rookie
8 years
I told you Gerrard would be good!

(Anthony Gerrard for those wondering)
Login to Quote

(Anthony Gerrard for those wondering)

He isn't, really! He just scored a goal 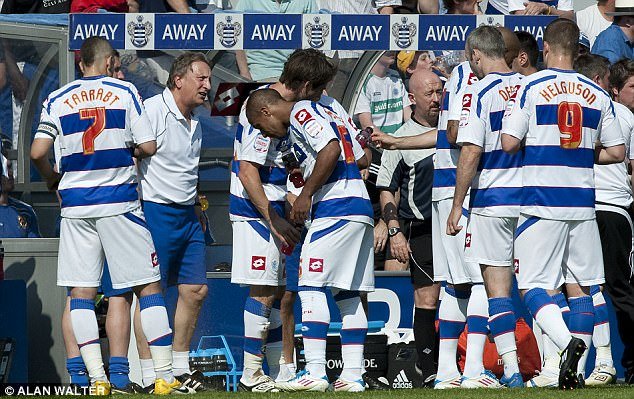 Andriy Shevchenko: I just wanted to call a team meeting to hopefully boost morale. We are languishing 16th in the table but I really want to ensure our heads don't drop so we can continue fighting for our place in the league. We may be in a run of bad form now, but if we remain positive I'm sure we'll secure a top-half finish.

Stephane Mbia: The boss is right.

Gareth Barry: Our results have been questionable lately but I have no doubt Andriy will turn this around.

Clint Dempsey: I agree with Gareth. Let's kick on!

Andriy Shevchenko: Well, I'm glad we are all on the same page here! Now, WHO ARE WE?

Andriy Shevchenko: What do we do?

Andriy Shevchenko: What we will accomplish?

Andriy Shevchenko: Because we are...?! 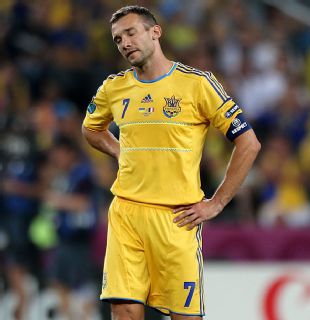 Well, obviously the meeting didn't work as we went on another run of bad results, resulting in me getting sacked. 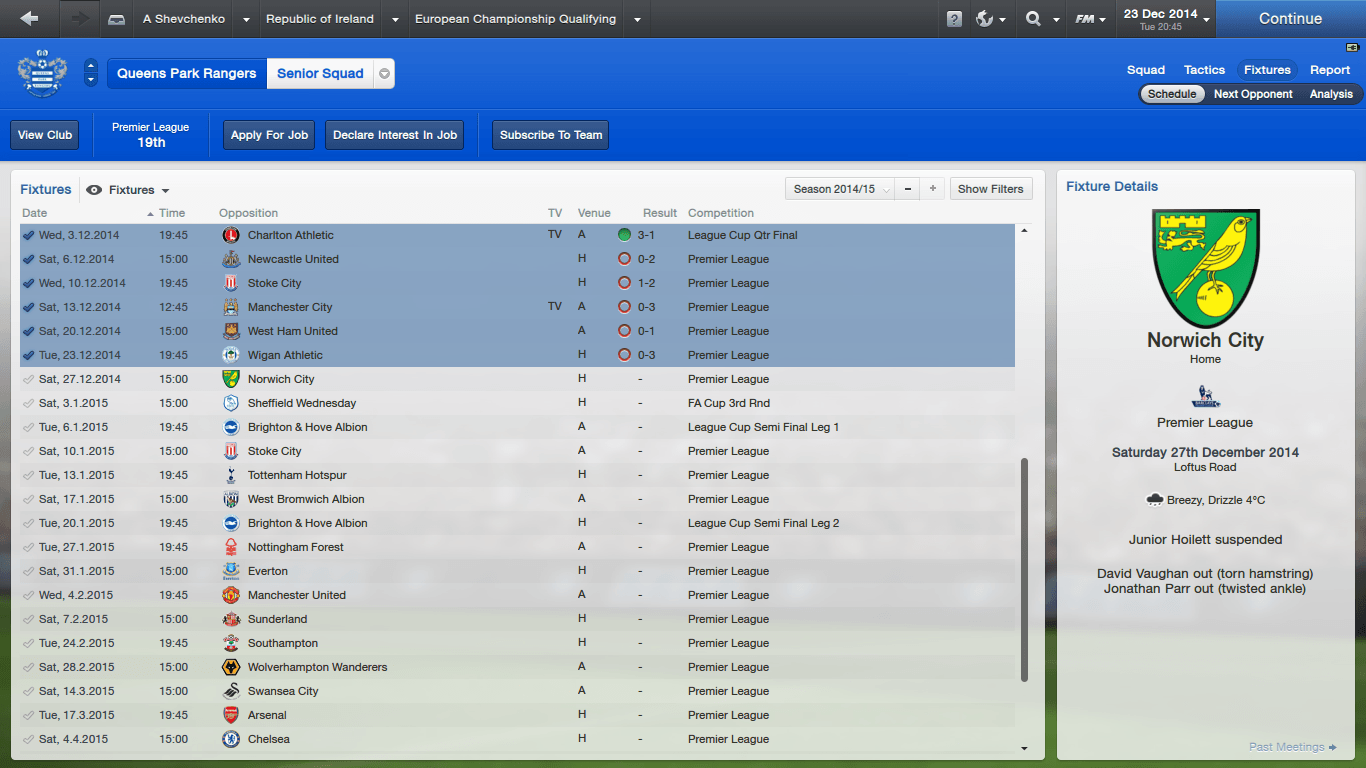 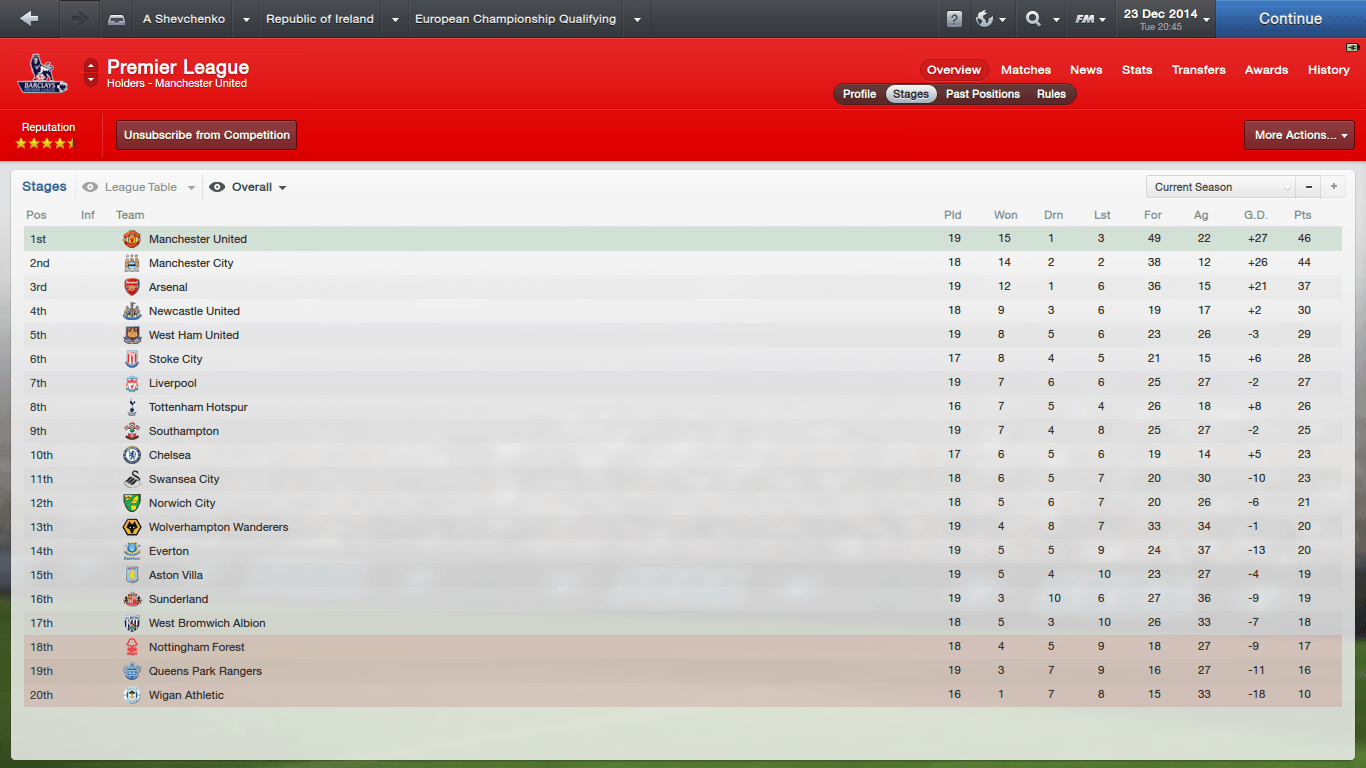 Defeated by Newcastle, Stoke, Man City, West Ham, and even Wigan saw us drop to 19th in the table, and the higher-ups snapped. Tony called me to his office to 'discuss my future at the club', but ultimately it literally meant 'sacking my ass'.

After two and a half years, my managerial charge of Queens Park Rangers, is over.
Login to Quote 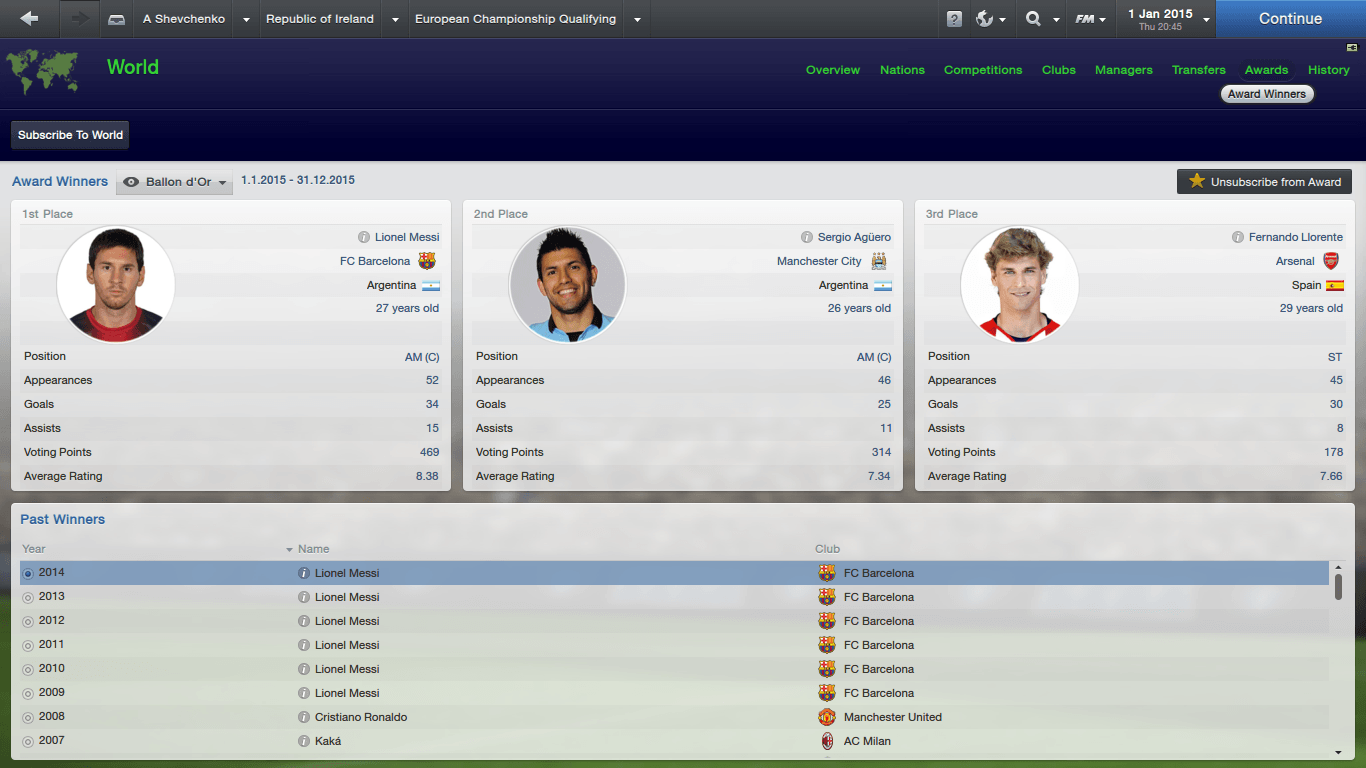 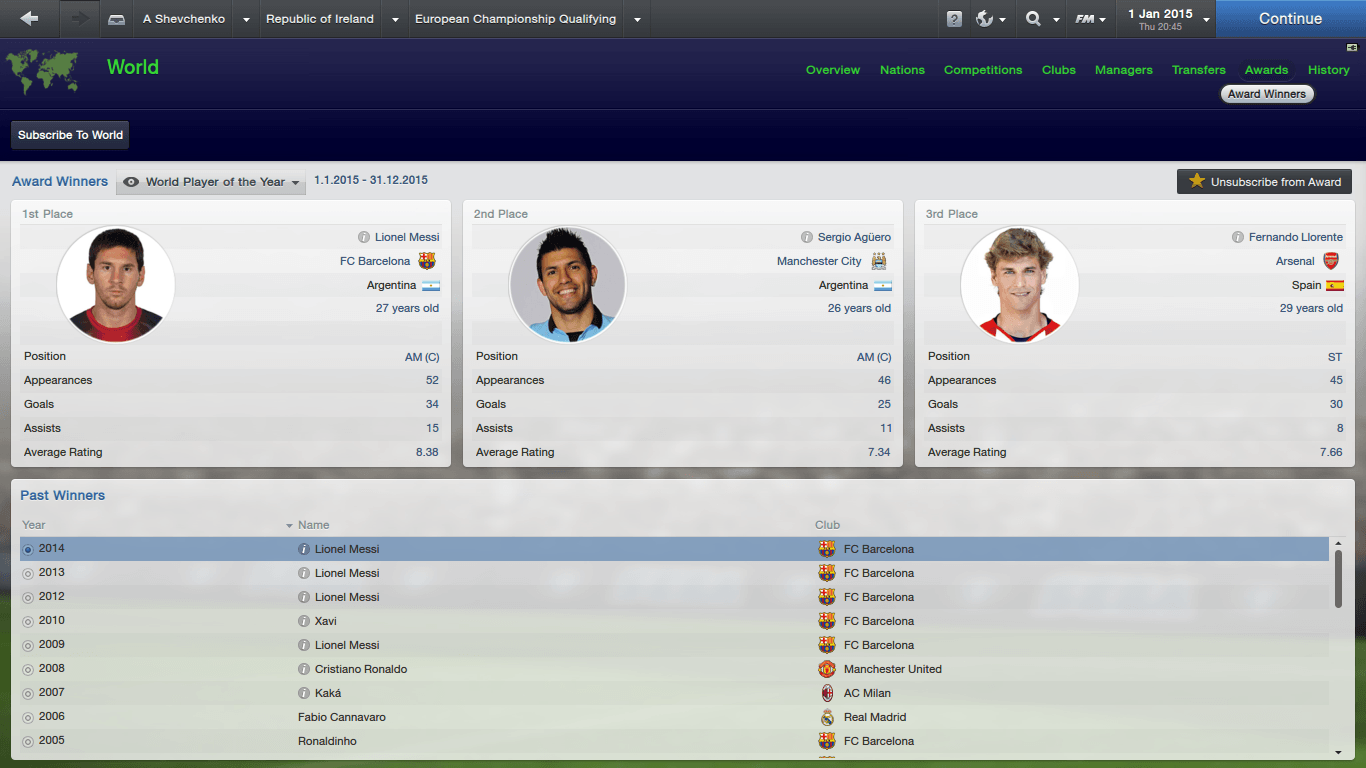 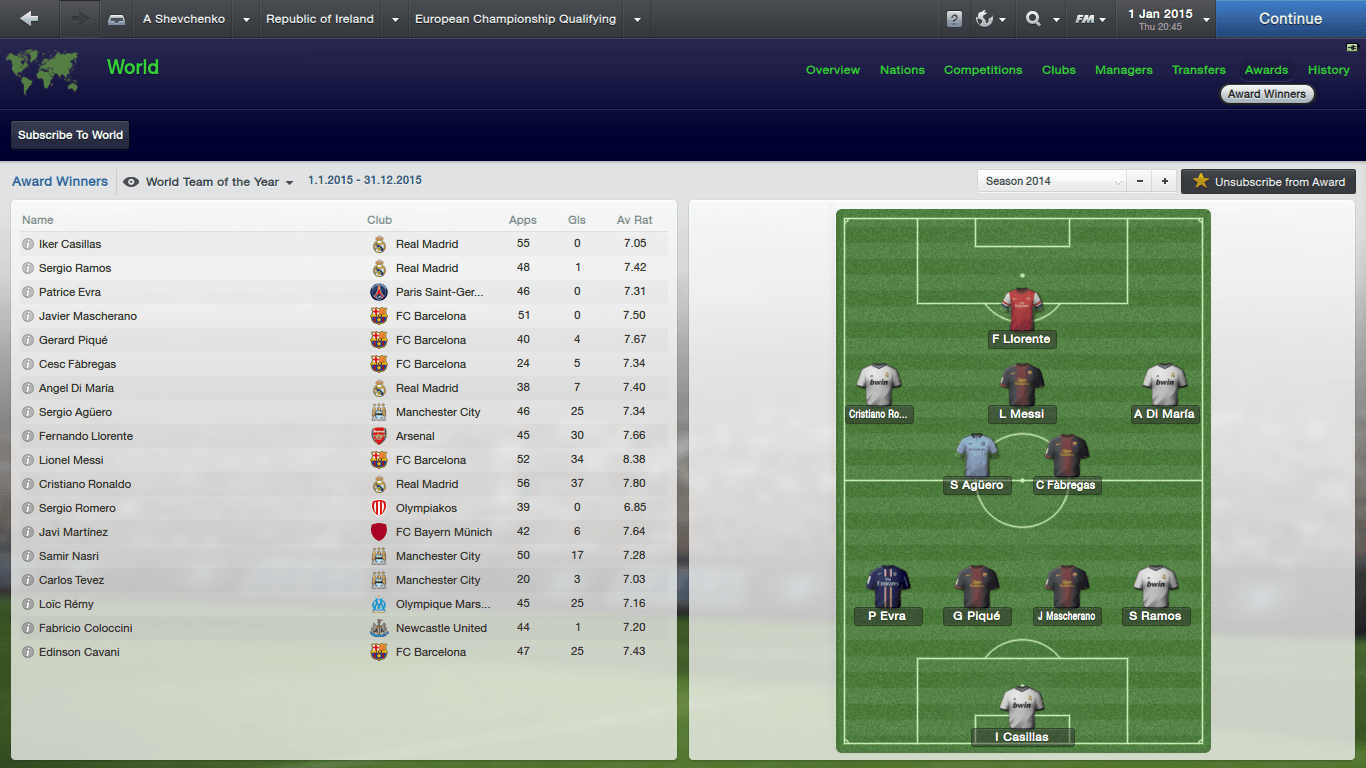 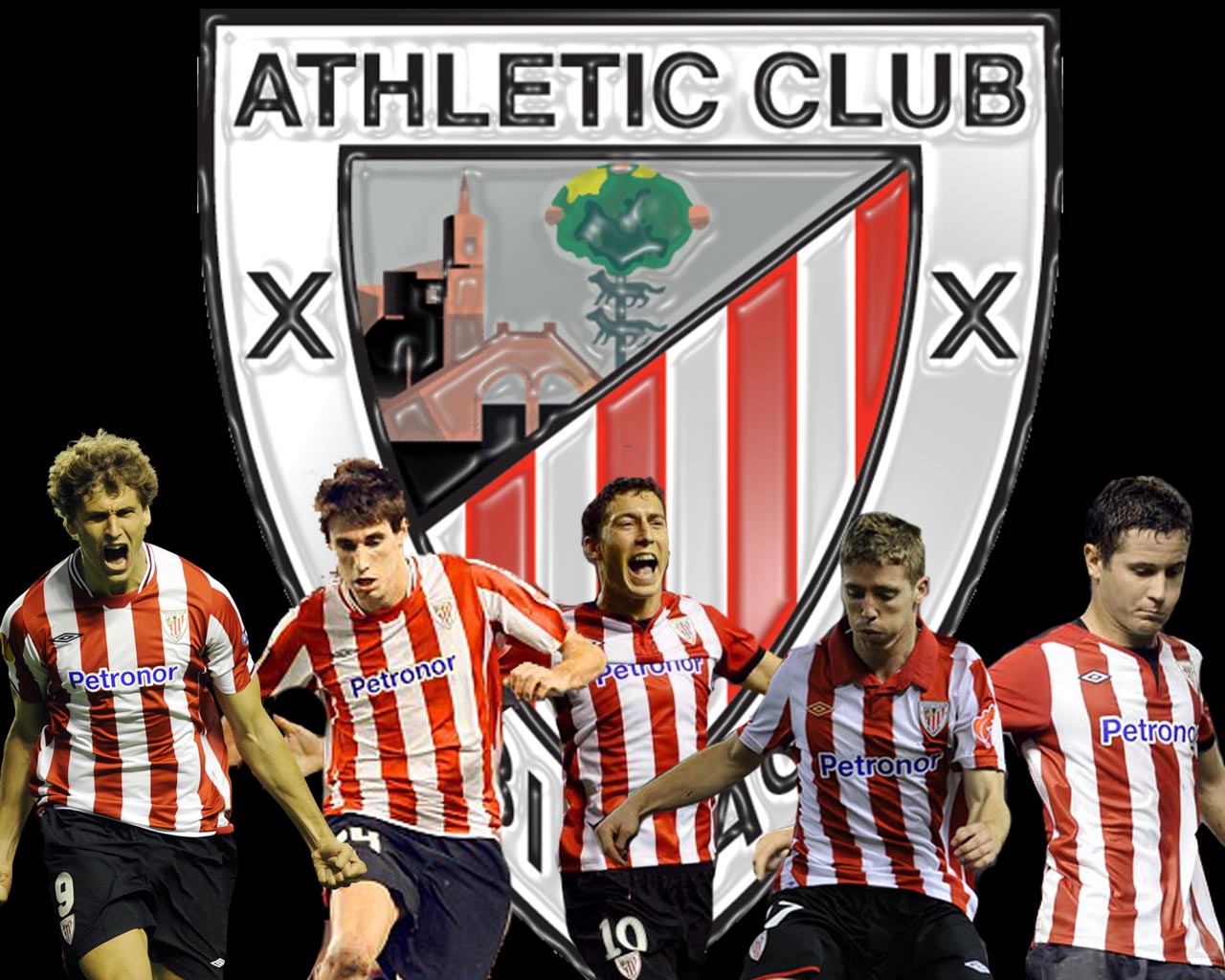 The chase is hotting up for the Athletic Bilbao job as Andriy Shevchenko and Roberto Martinez confirm their interest in the job.

The Wigan board will not have been pleased with Martinez's choice of words to the media, after being linked with Bilbao: "Athletic Bilbao are such a fantastic club and it's extremely flattering to know that I'm being linked with them. I suppose it might be tough to reject any offer they propose." 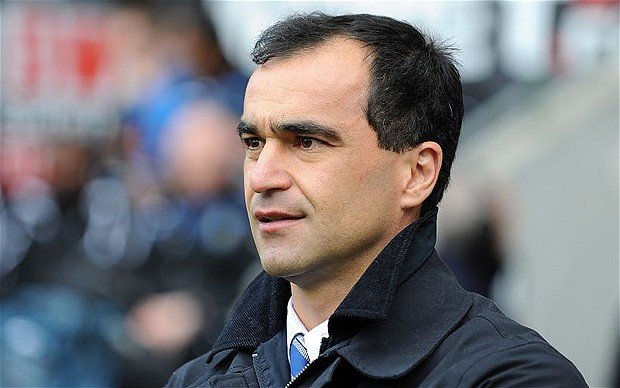 Martinez is reportedly on the verge of quitting Wigan, after the board's anger at Martinez for not completely ruling himself out of the running for the Bilbao job.

Meanwhile, unemployed Ukrainian manager Shevchenko has also put himself in the race. 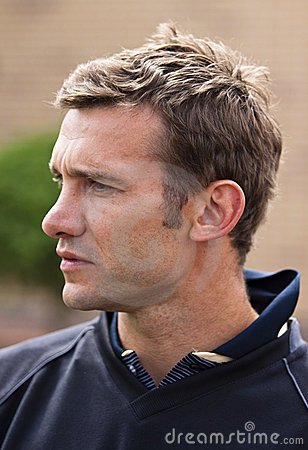 The former Queens Park Rangers manager, who led his team to the FA Cup and Europa League qualification, was sacked last month after a dismal run of results, his team unable to pick up a win in the Premier League for more than 10 matches. He has since been replaced by former Charlton boss Chris Powell.

Formerly a striker for clubs like Milan, Chelsea, and Dynamo Kyiv, Shevchenko is a legend in his homeland of Ukraine, and was linked to Bilbao in 2012 before the Basque club hired Gregorio Manzano. Manzano was replaced by Juande Ramos in January 2014, but the former Real Madrid and Dnipro manager was sacked after just one year.
Login to Quote

You are reading "Andriy Shevchenko: From Hero to Hero".