The FM Rookie
7 years
Congratulations man, this is a huge achievement! Football League, here we come!

I brought in a veteran goalkeeper, a weakness in our team. A well known, experienced goalkeeper in English football; Peter Encklmann. 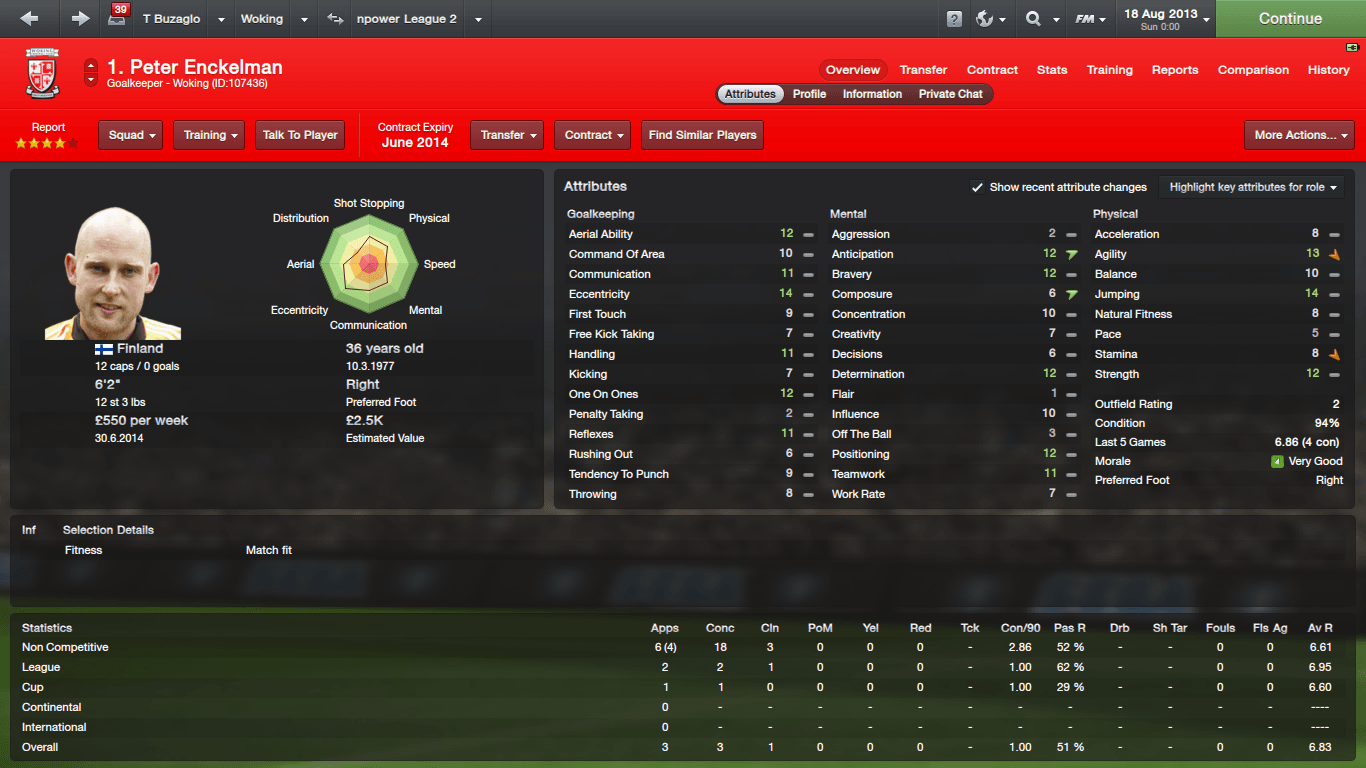 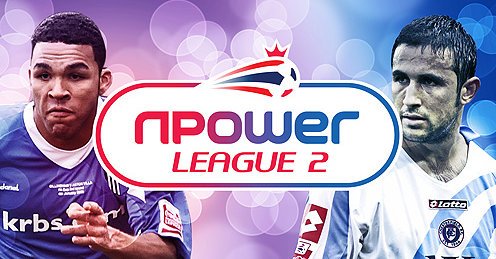 Our season started steadily, despite a severely fatigued squad, as a result of a busy yet prosperous pre season period; we kicked off with a 2-2 draw vs. Accrington Stanley. We followed this up with an impressive win over Fleetwood Town, with Williams and Pericard re-finding their promotion winning form.

A fantastic 4-1 victory over League 1 outfit MK Dons saw a fantastic draw for the club, a home affair with Everton. We will start making a name for ourselves, now. In days of yore we were known for our giant killing efforts, in fact after our 4-2 victory over West Brom a coachfull of the Baggies fans traveled to the North West to watch their slayers, such was the quality of the football we played. That day we succumbed to Everton losing 1-0, a respectable result but I know my boys can go one better. I'll have them prepared of course, let's see how the big boys of Everton cope on a churned up Kingfield pitch, against a dogged Woking FC XI...

hope you can do well in League 2, have u set any targets on when you want to be challenging for promotion?
Login to Quote 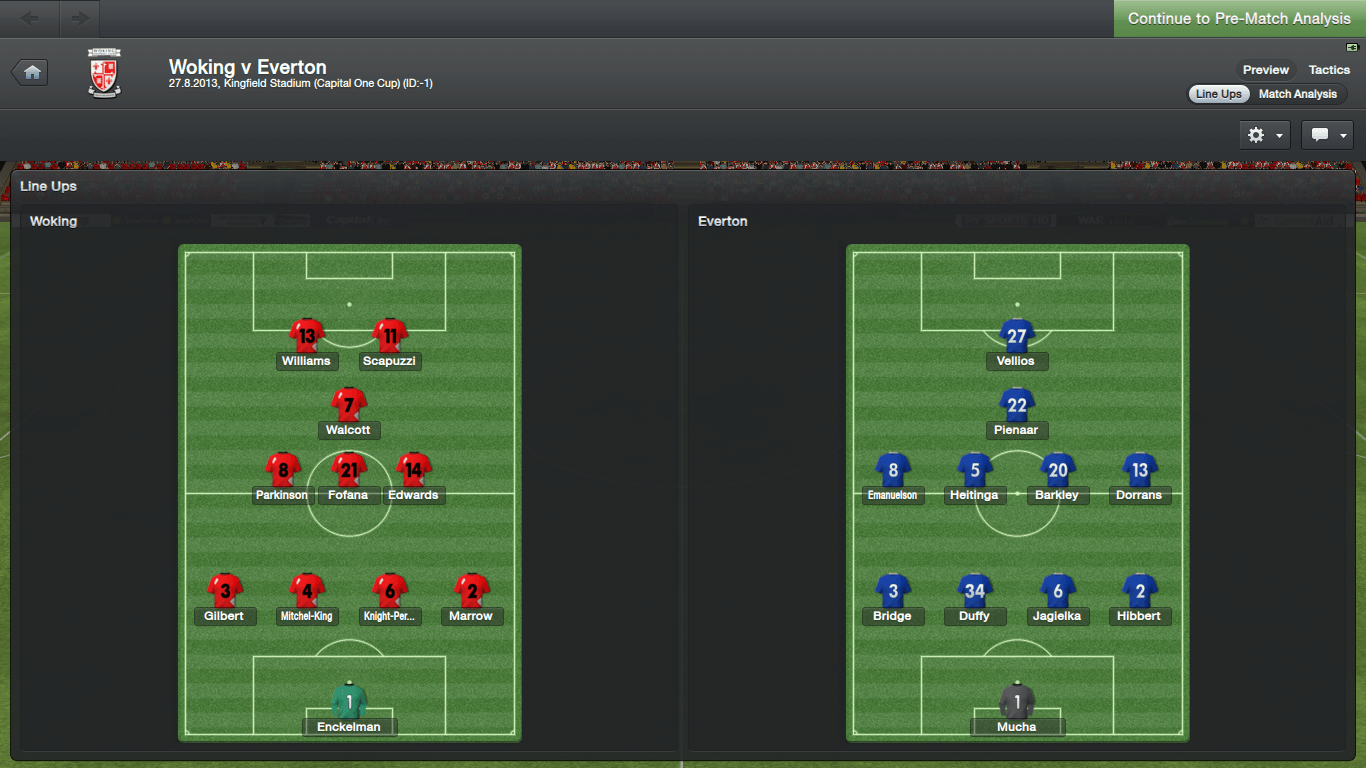 The odds are stacked against us, the teams of varying class and skill; notice the omission of Vincent Pericard, slain by injury. This match would take a some team talk! 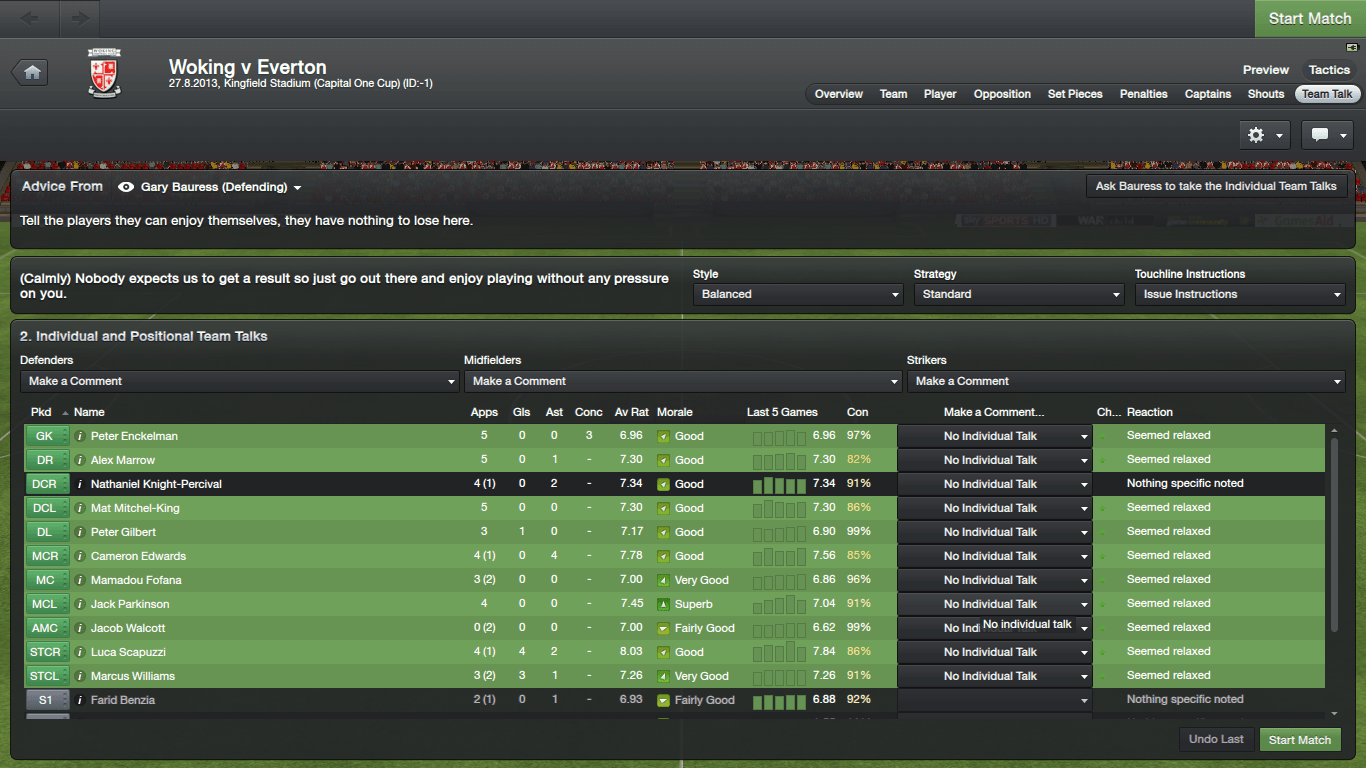 The boys were relaxed and motivated, they all knew what I expected of them, bravery, togetherness, stubbornness, commitment to the cause and above all, never give up, miracles happen! I feared we'd need one.

FIRST HALF 0-0
The match began cautiously, both teams sparring; not landing the final blow, feeling there way into the match, on 15 minutes, Velios struck a close range effort home, not the plan. But as instructed my boys were not downhearted and without any expectancy played freely, a chance coming and going for Luca Scapuzzi. The boys became almost dominant, playing possession football and carefully building up into The Toffee's third, dominating possession. Despite this Everton counter attacked well, winning a corner that was headed home by Ross Barkeley on 30, I was clinging on to hope now. Knight-Percival also picked up an injury and was replaced by Mike Cestor. Half time, down but not out.

My team talk worked to devastating affect, I was sure the boys would impress in the second half. 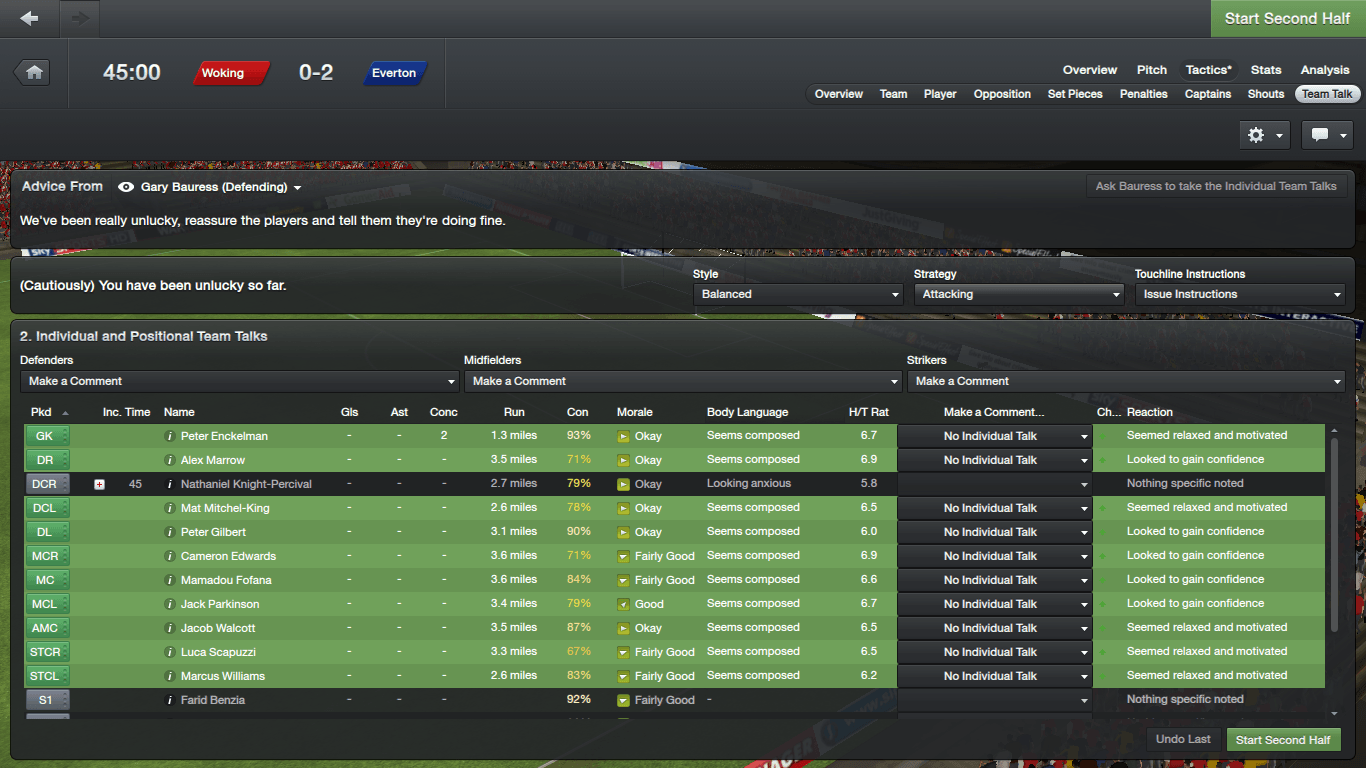 We started the second half well, controlling the tempo of the game and playing our own game. I brought Kamaron English on for a tiring Luca Scapuzzi, carrying a knock, on 60 minutes. this was not enough to hold Everton's superior talent though soon enough, Jelavic netted a well timed 3rd goal, respectability may be all I have to hang on to now. The game ended 3-0 not what I had hoped for but by no means disgraced, this game has shown us how far we have to go, how much progress yet to make, we'll get there one day, one day soon.

The income from the match is all well and good but it has taught me a lot, like a mid term performance check test in school, it has shown me that there is progress here at Woking, but still a long way to go. We must now turn our attention back to the league...

The FM Rookie
7 years
Everton is a tough team, do not put yourself down. I love the style of post you are using, nice and colourful

Opening to the season; 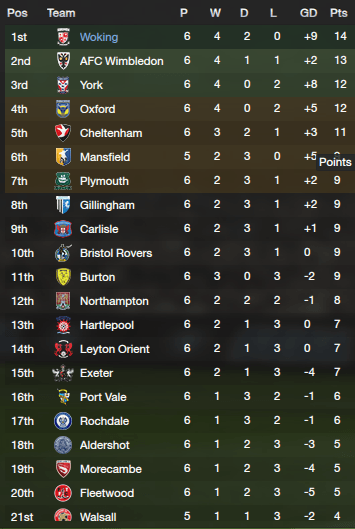 The Cardinals once again rising to the top, could this be another promotion season? This form is helped in no small part by the forms of Luca Scapuzzi and Marcus Williams;

Scapuzzi the creator, Williams the finisher, a deadly combination thus far. Injured Pericard has struggled to get back into the team despite a tally of 3 goals. We must push on and tighten our grasp on promotion...

or.dabool
7 years
Started the season good, top of the league

Also, I'd say that the result against Everton is great comparing yourself to PL giant! WOKING F.C.!
Login to Quote 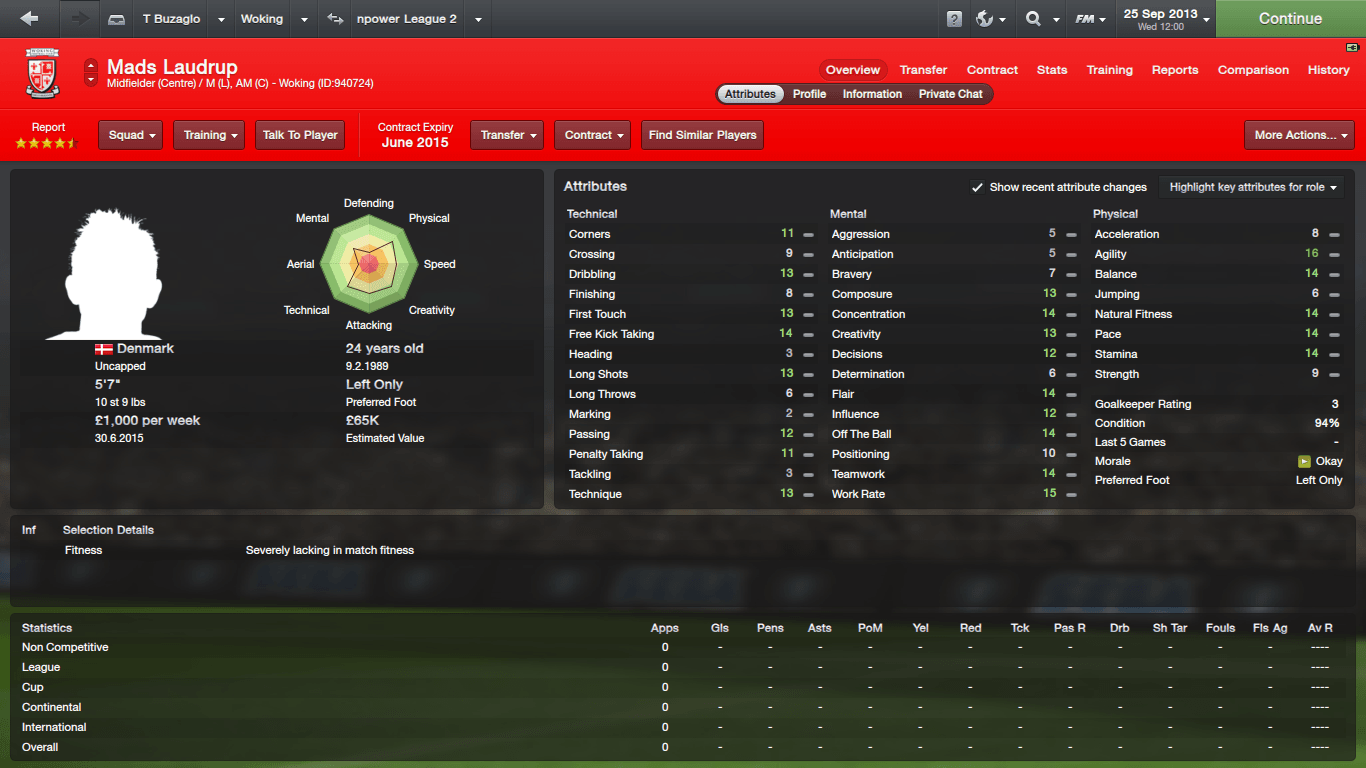 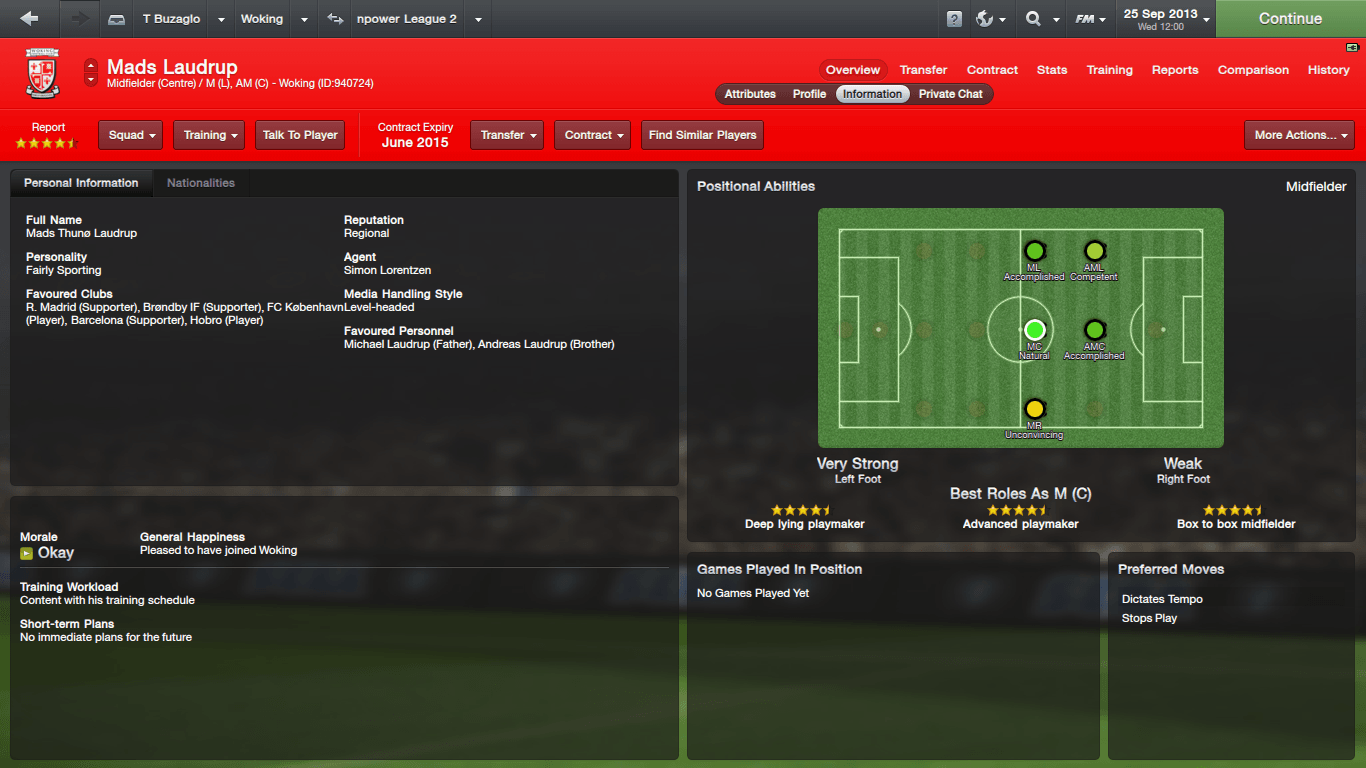 If Mads is anything like Micheal, we're in for one heck of a player! But he cannot live off his surname, he must first prove himself on the pitch to earn my respect and admiration. Two things that the name Litmanen demands, despite his age, his class and experience are a great thing for the squad, he can impact the club both on and off the pitch; 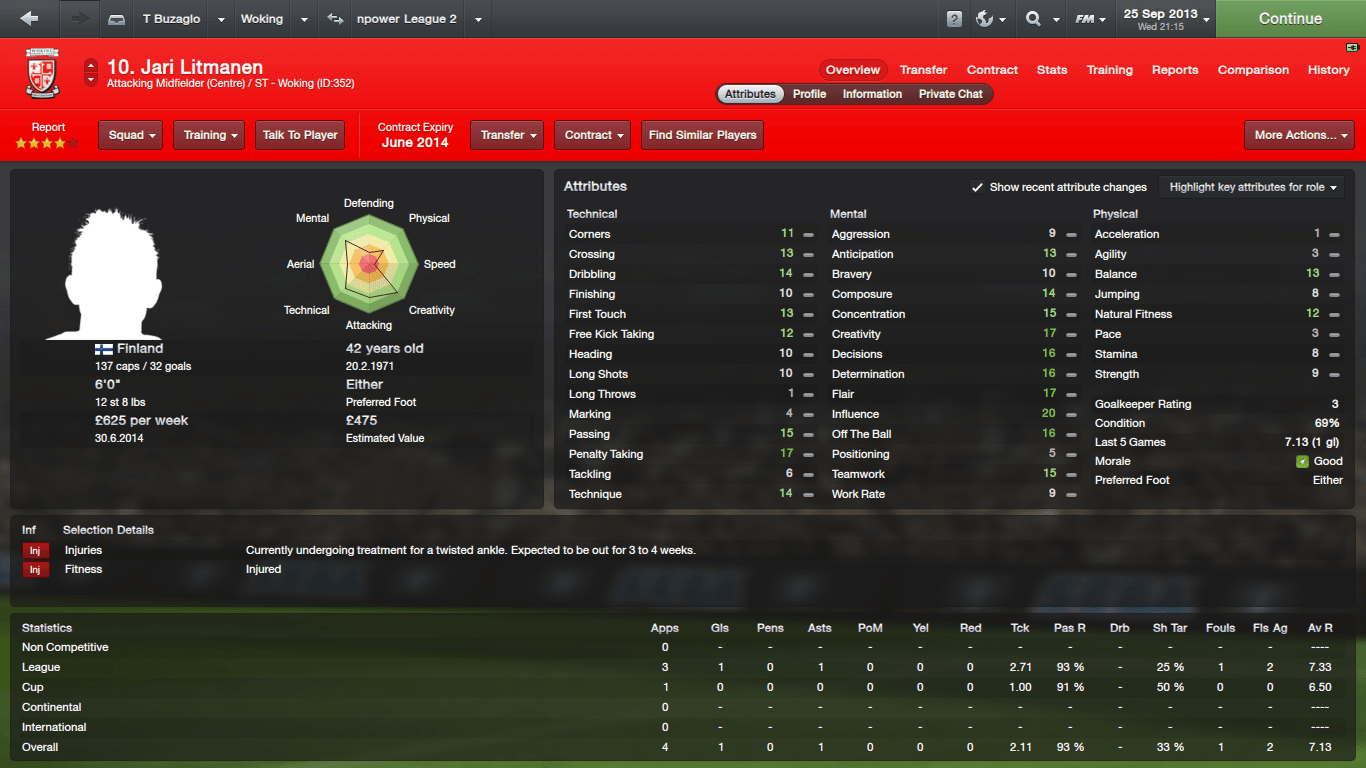 This fresh injection into my squad should be just what we need to maintain the form that has seen us rise to the top of the table!
Login to Quote

The FM Rookie
7 years
Great signings there. Just a warning, Jari tends to spend most of his time in the physio's office. Hope they shine though

15 games into the season and expectations are on the up, this is no longer a season of consolidation, nor of steady rise, with an unbeaten start to the season and a team already stretching out a 5 point lead over the league, promotion is quickly becoming an expectation rather than an aspiration. 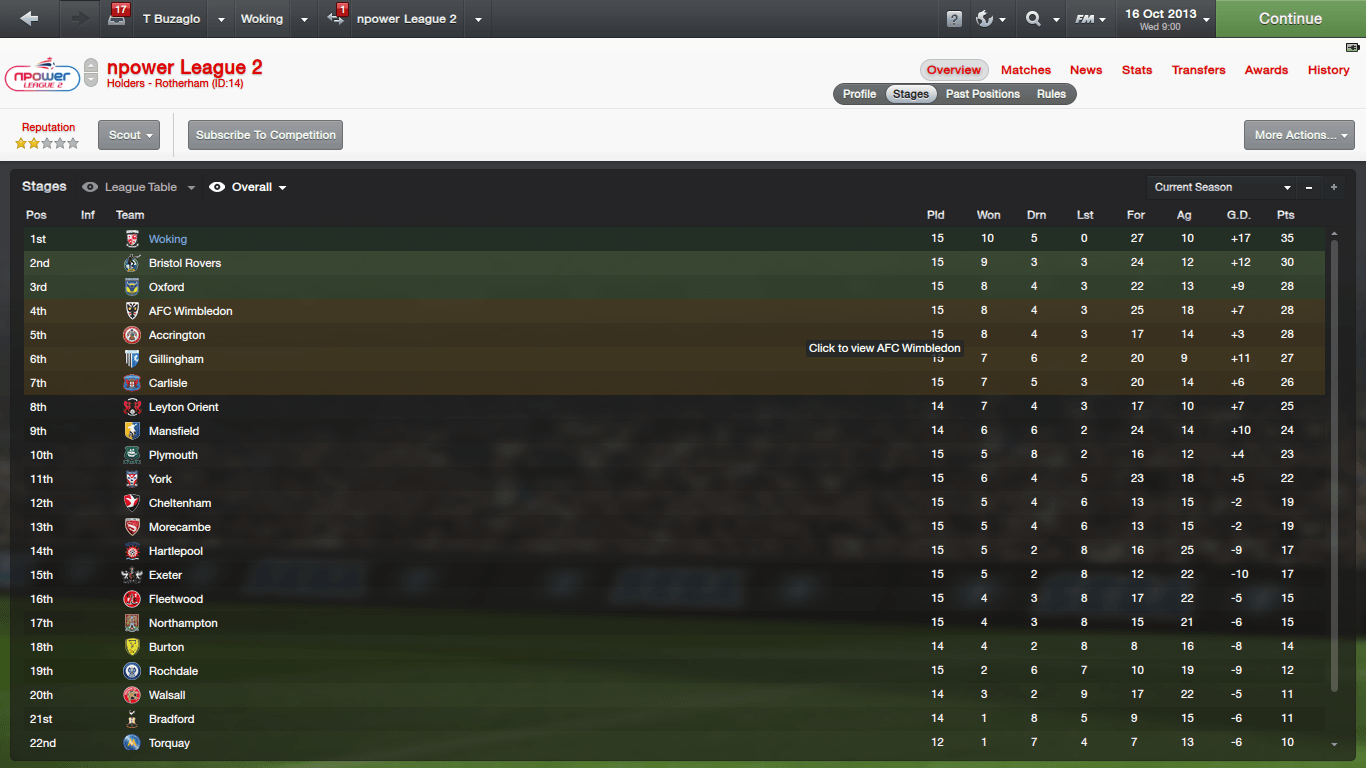 Williams has notched up an impressive 10 goals already this season with Scapuzzi continuing his impressive form, Mads Laudrup is already finding his feet in Woking and looks like he might be a very impressive player for the club.

We must push forward and maintain the form we have found, we know the winning formula, we must now reproduce it...
Login to Quote

You are reading "Tim Buzaglo: Return of the Hat Trick Hero".