Keep it up.
Login to Quote


Ralph Johnson's reign at Kaizer Chiefs was summed up in one game as the Amakhosi beat the Galacticos 4-1 thanks to a Bongani Ndulula hat-trick which means Kaizer Chiefs are through to the Club World Championship final against Al-Sadd of Qatar but if Kaizer Chiefs can beat Real Madrid, who knows what can happen? 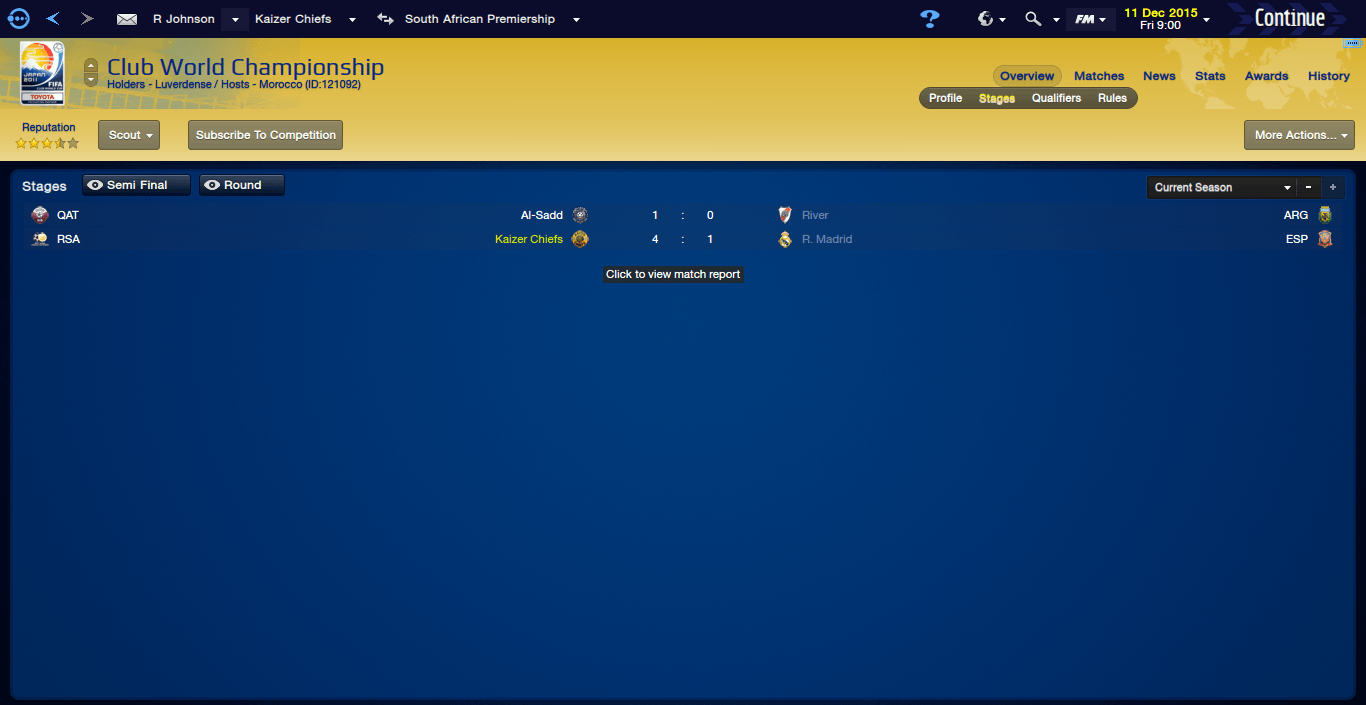 
As if winning Real Madrid isn't good enough, Ralph Johnson has guided Kaizer Chiefs to the Club World Championship for the first time in Kaizer Chiefs history after beating Qatar side Al-Sadd 3-2 in Morocco although, it may be Ralph Johnson's last achievement at the South African champions after declaring interest in the vacant manager role at Australian side Sydney FC.
Login to Quote


After winning 7 trophies at Kaizer Chiefs, Ralph Johnson has moved to Sydney, Australia to venture into management in Asia "I'm very happy to be here and to get straight into things, I don't have much experience in this part of the world so it'll be interesting to see how I do"
"You're a bit of a Ibrahimovic type character, swapping clubs after a bit of success?" said an Australian journalist. Then Johnson blew his top walking up to the same journalist got hold of his shirt "You f****** what? I'd like to see you win two continental cups followed by 9 other important trophies, pipe down you little s***. I've come from flipping burgers to continental glory, sit down you c***." The whole room giggled at the journalist's red face as he slowly walked out of the room. "That's it ladies and gentlemen, conference over, go on, OUT!" said the Chairman.
Login to Quote

Justice
7 years
You're doing well, keep it up


After just 29 days at Sydney because 'he couldn't adjust to the league regulations' and the board didn't help him very much, the Australian public has held a petition for the Australian FA to change league regulations and Sydney fans held up banners in the streets complaining they want the board to leave the club. There are now rumours that Johnson is looking into another job in Asia with Seoul and Jeonbuk being mentioned
Login to Quote


A week after his resignation from Sydney, Ralph Johnson has taken the vacant manager role at South Korean club Seoul "My last job at Sydney didn't work as planned so I really hope I am successful at such a big club like Seoul, I've met the people here and they are really great people and I'm really excited to get started here" were words of content by Johnson.
Login to Quote


good pre-season apart from the 2-0 loss to Shenhua 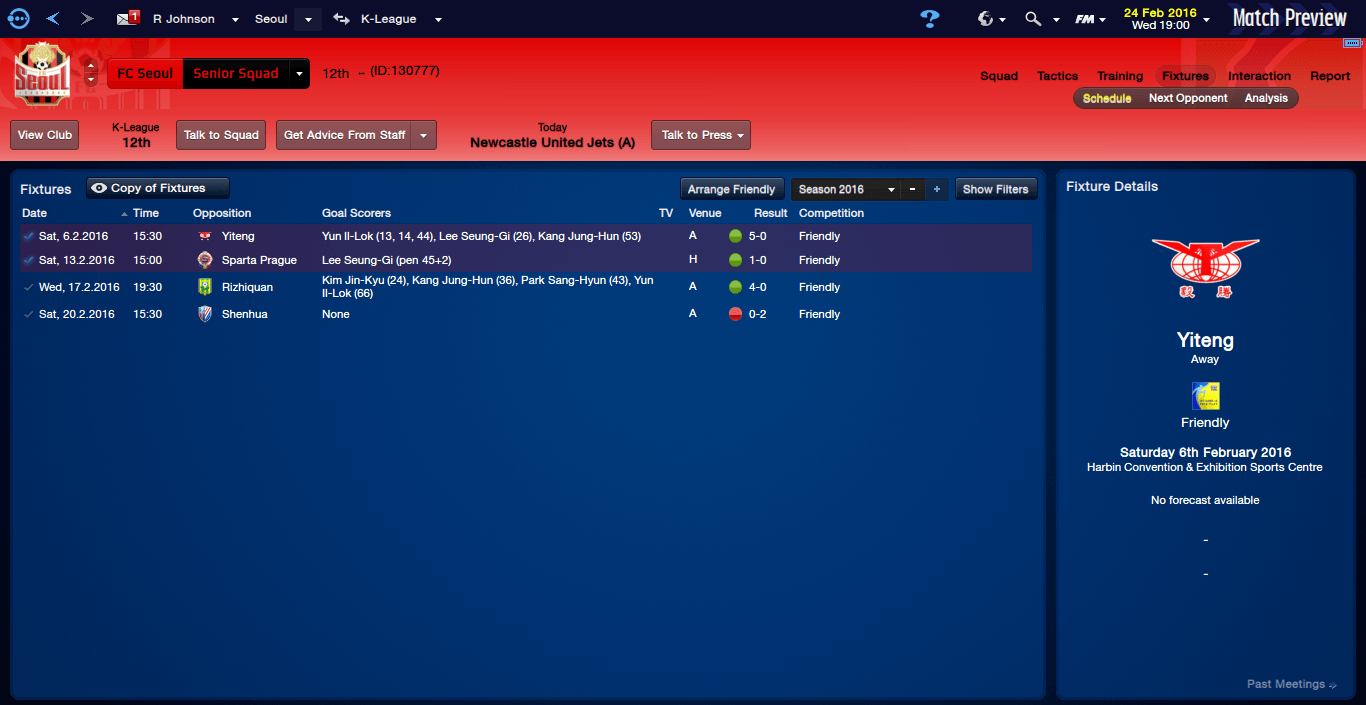 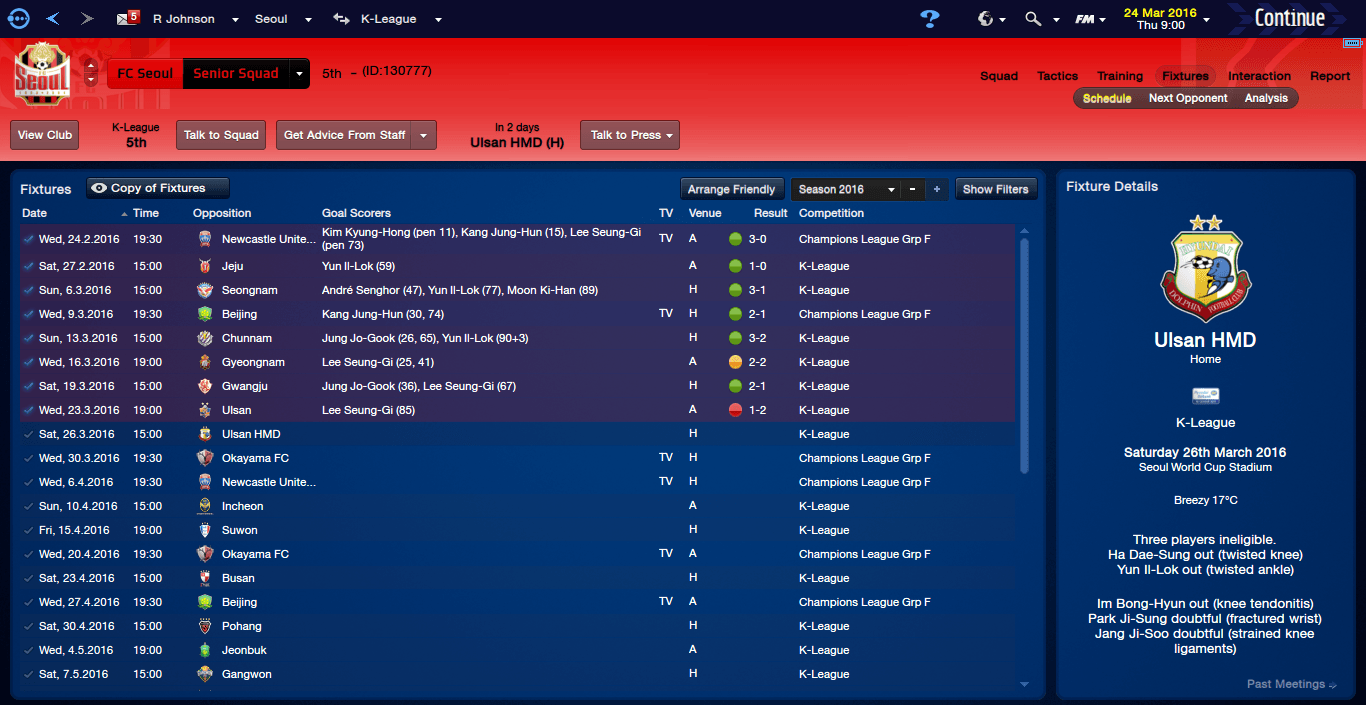 We are 6 points ahead of 2nd placed Chunnam Dragons with a possibility of going 9 points as we have a game in hand. 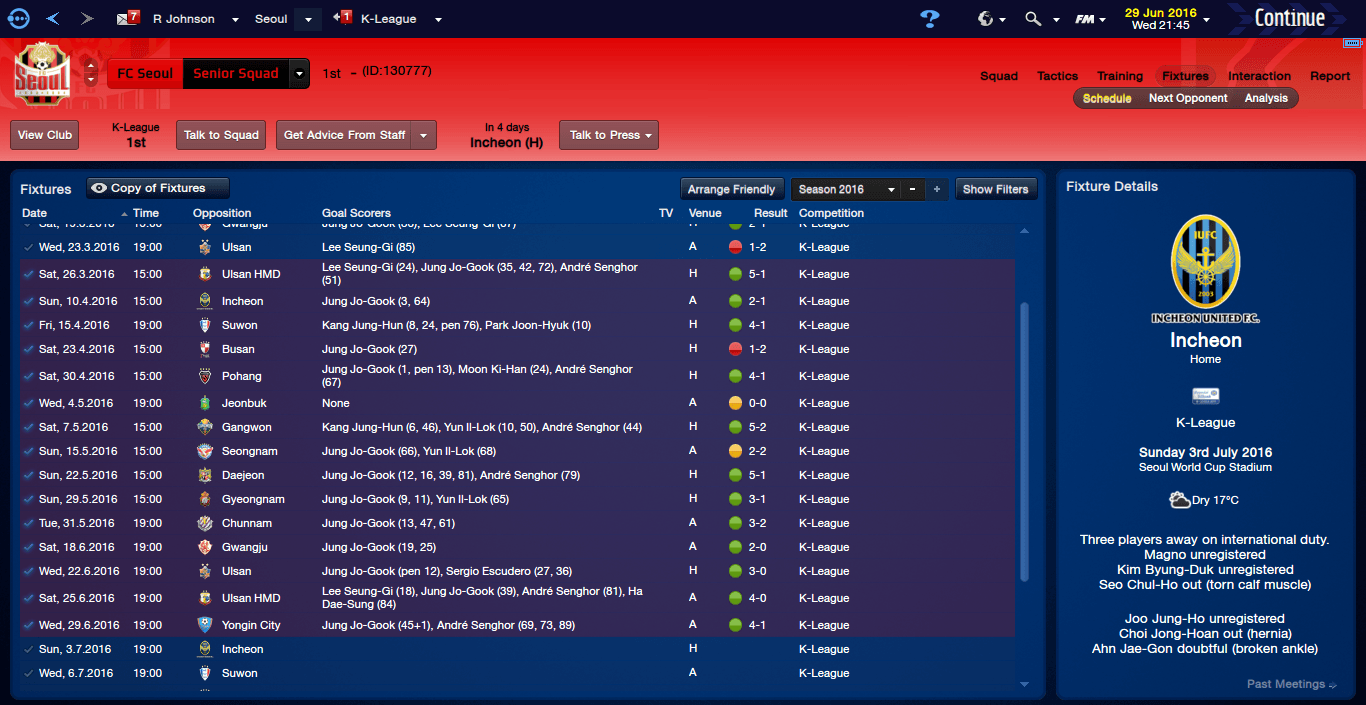 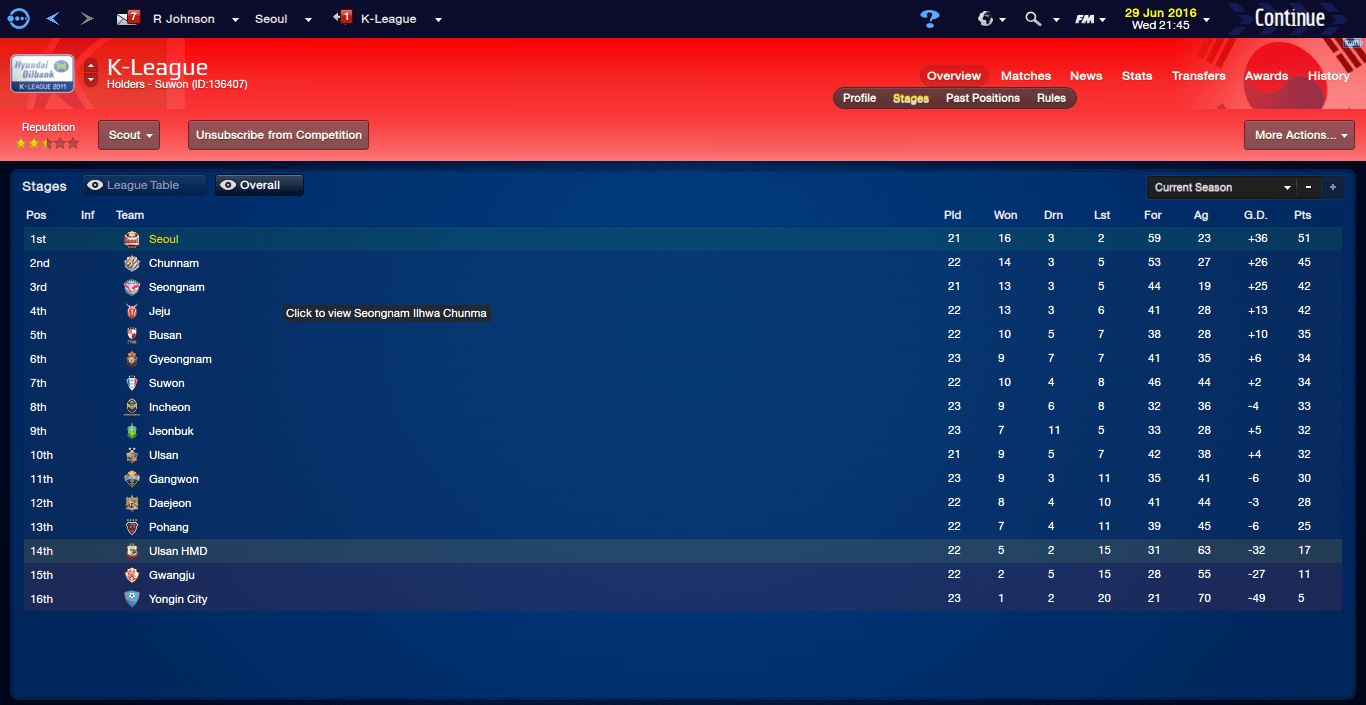 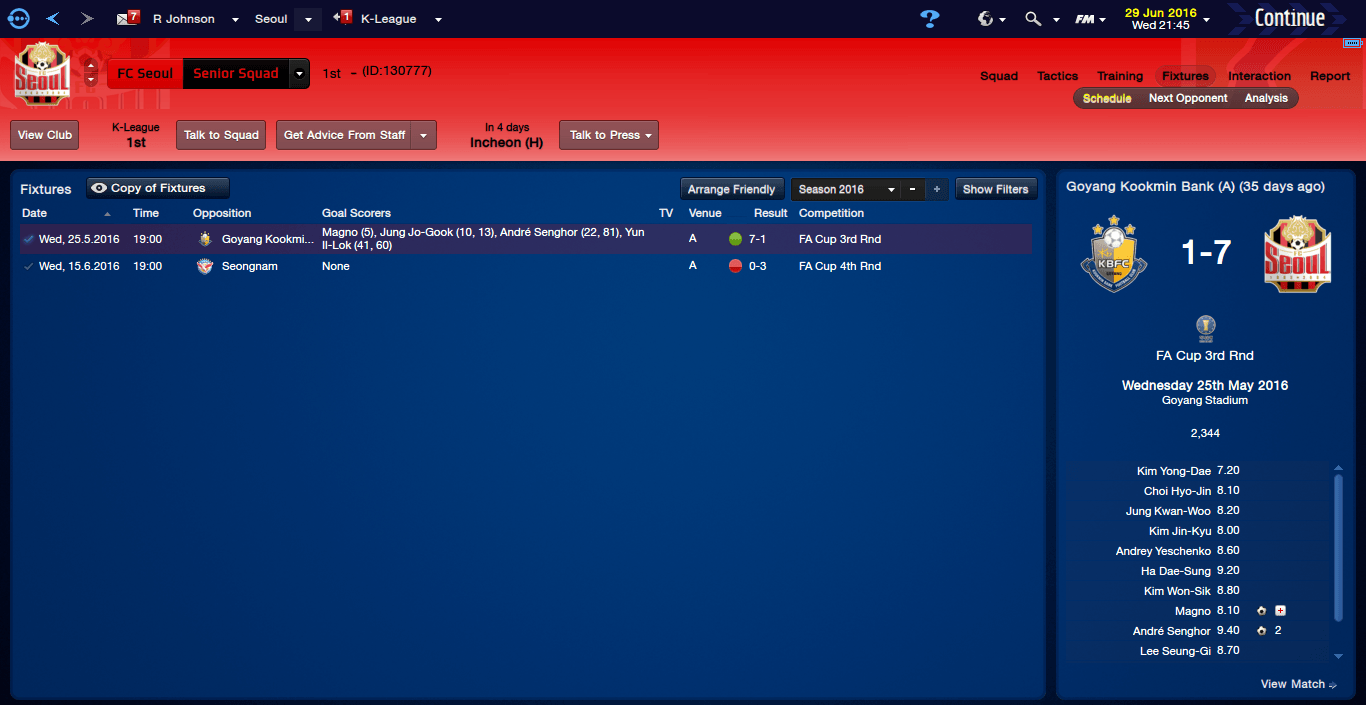 Apart from the Beijing result we breezed through the Group Stages and got through the Second round comfortably but I don't know where it went?! If anyone knows what happens in the Asian Champions League can you leave a comment? 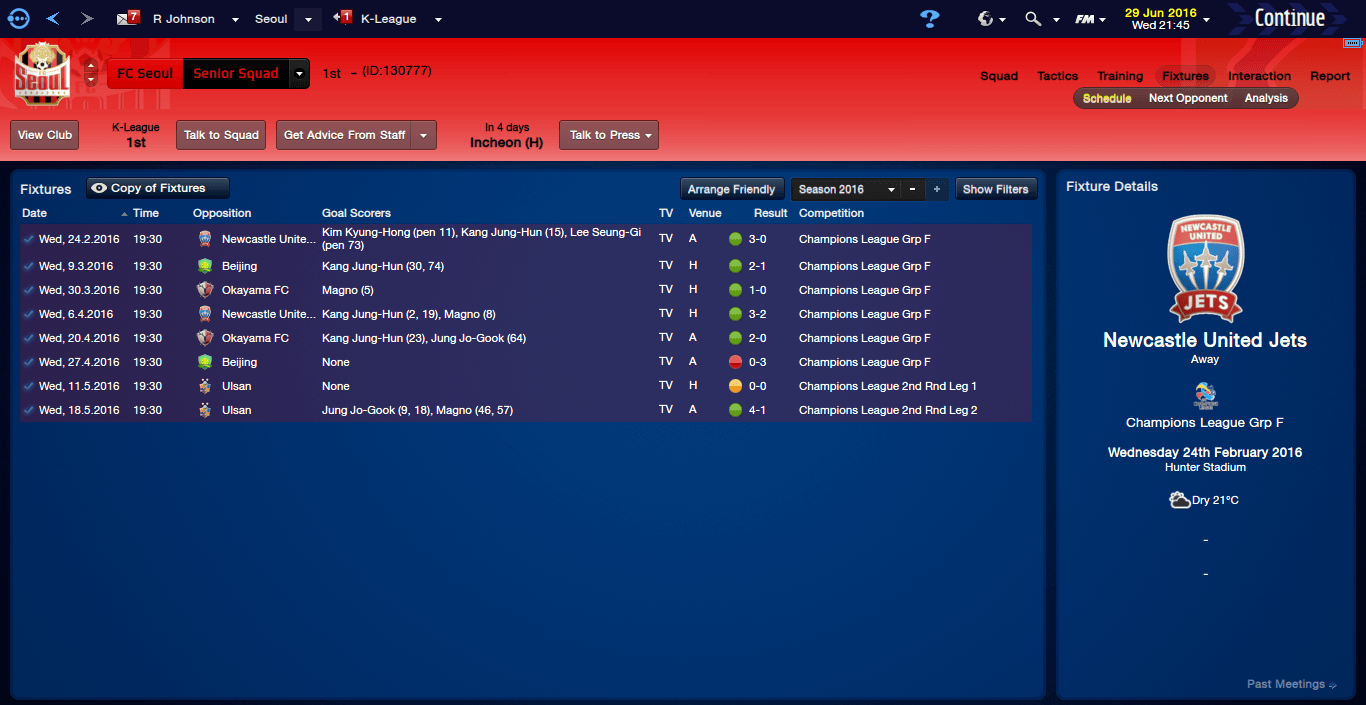 Jamesg237
7 years
That was a rather quick swap from Australia to China. It does look like you're having more luck in China though. When do you plan on returning to Australia or do you not plan on doing?
Login to Quote


I'm in South Korea but the only reason I left Australia is the league regulations were strange, you were only allowed one player on a 'Key Player' contract so I had to resign, MrJK will tell you how bad the A-League is.
Login to Quote


So then, the initial 30 game season is over and now the league has split into two and now we have 13 games left after beating Busan l'park 3-1 in the first game + I've finally got to the Asian Champions league Quarter-Final which we won 4-1 (first leg) against Teraktor-Sazi 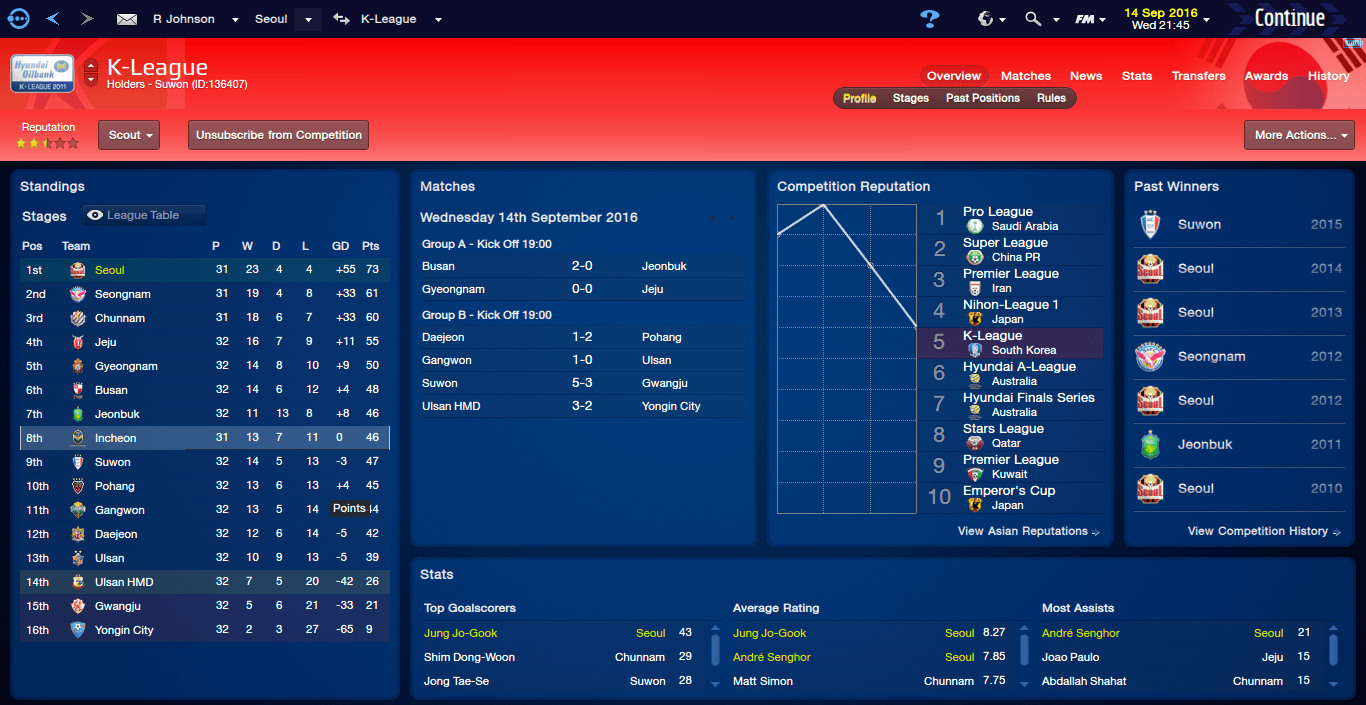