P.S. The story telling is great!

Kane
8 years
Well done, a great start to the story. I like the slight changes you made to the match reports too, looks nice. Keep it up.

great job getting those two

Gambit: Appreciate the kind words. I'm loving your two brothers story and it's a very different challenge to anything I've seen!

Akash: Thanks Akash I'm glad you're enjoying it! I feel like this is a better effort than my first attempt at a story haha

Devil: Cheers Devil, appreciate the support and thanks for letting me use the match updates. Saw them on your story and love the style!

Randy: Haha I'm just glad I managed to get some money to spend, even though I had to sell my best player! Just gives me a much younger squad (avg age is 23) and the opportunity to develop a team for the future!
Login to Quote

Blue
8 years
Really liking this so far! Keep it up!
1
Login to Quote

JasonRM
8 years
This is brilliant writing mate, I'm loving this story. I also quite Lyon, so I'll definitely be following. The signings are class, especially Will Hugues, who is a world beater in my save. Keep it up

Madridista: Thanks Jason hope I can keep up the writing style I'm enjoying it
Login to Quote

Thanks back for your words! And for appreciating my story!


Having secured new sponsorship deals with BNP Paribas and Kappa we had our new kits designed just in time for the first match of the season. I had decided to call in a specialist designer. I wasn’t happy with the previous kits but I knew there was a friend in England who would be able to create something special and I am very pleased to present the new Olympique Lyonnais home and away kits, designed by kit specialist Louis O. 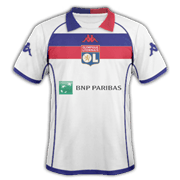 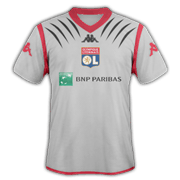 I wanted us to hit them on the counter and stop them from creating anything. We controlled possession from the start but we weren’t creating anything. Having to contend with an early sending off I decided it wasn’t worth going all out attack but we sat back and tried to prevent any real chances for Rennes. We only mustered 5 shots on goal, with only two on target. This was disappointing but I didn’t have the confidence just yet to change things around and go all out attack. It finished a bore draw but one I would take.

We lined up 4-2-4, all out attack in this match and I expected lots of goals. The boys obliged and we battered Troyes 4-1. My first game at home and it was a resounding win. It could have been 5 or 6 but we missed a few easy chances. I wasn’t too fussed though we had a good win here and I was happy with the boys.

Even though we were away from home, I was confident in the team, especially with the new signings in the team. I decided to go attacking again and went 4-2-4 with Tony Watt getting his starting debut, as well as Colazo. We went up 2-0 early on only to have the opposition drag it back 2-2. After that, I put Will Hughes and played him as an AMC. We were pretty much playing 4-1-3-2 as this point and we snatched the win with CB Bisevac scoring a late winner. The first away win of the season was an exciting one but I was glad we were up and running away from home as well.

With Valenciennes coming to our stadium I had a decision to make. I plumped for the 4-2-3-1 formation and it looked like it was about to bite us in the a**. We went 2-0 in the first 8 minutes. I was in shock but I stuck by my tactics and told the players to play it to feet and to exploit the wings more. This sparked a turnaround of epic proportions. We were 4-2 after 34 minutes. There were more goals in this game, one each for both sides and we ran out 5-3 winners. We are conceding a lot at the moment and this is a concern, especially when we have to play the big teams but I’m sure we will be able to tighten up as the boys get used to playing together.
Login to Quote

Ziechael
8 years
Some great results there, only 2 points dropped and lots of goals scored, lovely!
1
Login to Quote

gambit84
8 years • Edited
Some good scores m8! The defense is not doing great, but the attack is great! Keep it up!

P.S. The kits are great!


After our game against Valenciennes I could tell there were problems. We had 6 players injured. Some of them were hurt against our match against Evian TG but it didn’t matter. All of these players were first team players and left us with problems all over the pitch, especially in defence.

This left me in a quandary as to who to play in our next match at the back and almost certainly someone was going to have to be played out of position. I wasn’t looking forward to this. The transfer window was closed and there was nothing I could really do about this except hope that my players could man up. And then it hit me. We have Napoli coming up in our first Europa League match at home. God damn it we were going to get battered in our own stadium and there was nothing I could do about it except pray. Pray and maybe drink to drown my sorrows. I reached for that bottle of scotch. There wasn’t a lot left and I wasn’t ready to spend the next day hung-over. I tossed it in the trash and got in my car and drove home.
Login to Quote