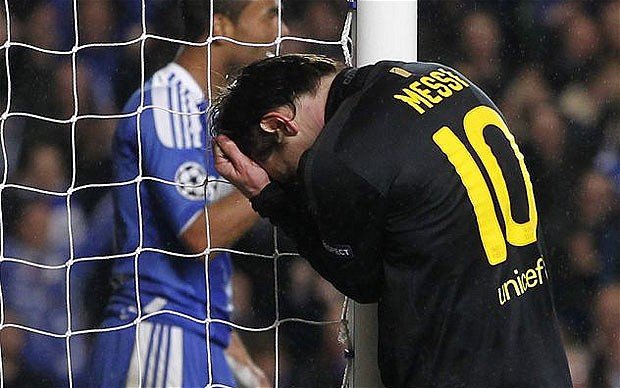 "Hasta Luego cha cha cha cha cha" is what the Chelsea fans were singing last night after knocking Barcelona out of the champions league. The tied ended 3-3 on aggregate but Chelsea advanced to the final due to the away goals rule. This match was hyped hugely due to the events that occurred in 2008-2009, where Chelsea were furious with the match officials and felt they were cheated out of the champions league final. The second leg in particular was very heated as both Mascherano and Hazard picked up red cards. Hazard will now miss the final.

Mourinho spoke proudly about his teams's display, here's what he said:

What a beautiful night this has been. Many people thought we couldn't beat Madrid, but we did it. You would think they would then tip us to beat Barca, but we were still the underdogs. Tonight we have shut a lot of people up. We had to be tactically smart as we know the attacking threat Barca possess. We caught them on the counter attack each time we scored and so our game plan worked. I'm not concerned about Hazard's red card. He has helped us get here and I don't think it was a red card. We hope Jovetic is available for the final as if he isn't it will be a huge blow to us.


In the first leg, Chelsea dominated completely but failed to win. They even had more possession than the Catalan side. Barcelona picked up a crucial away goal which would have disappointed Chelsea and Jose Mourinho. The second leg was very heated as two players were sent off and Stevan Jovetic limped off injured. In this leg both teams went all out as they knew what was at stake but in the end it was Chelsea who came out on top thanks to the dubious away goals rule. 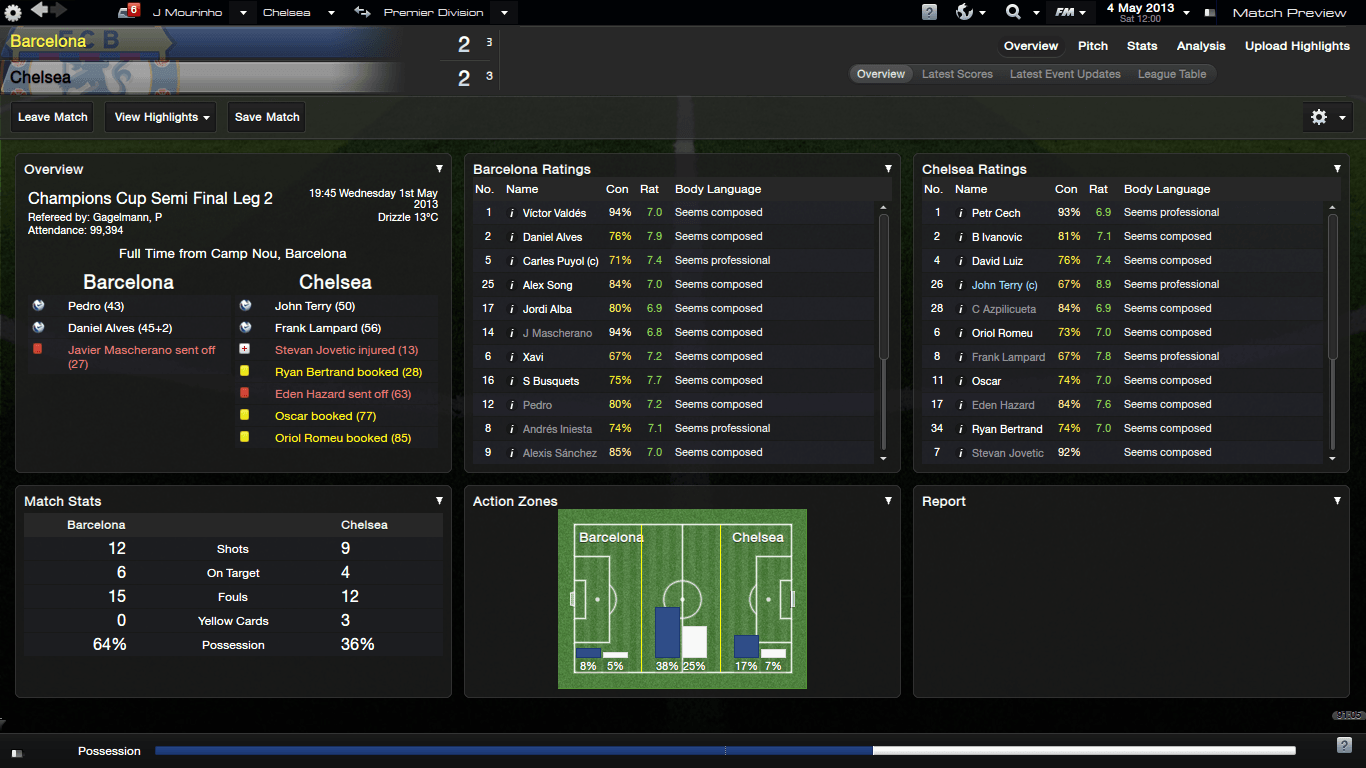 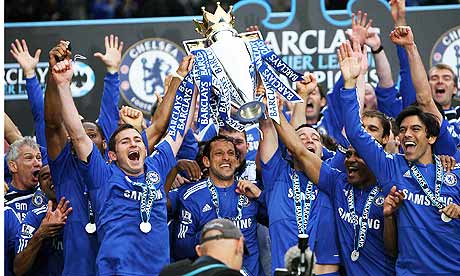 "CHAMPIONE, CHAMPIONE, OLE OLE OLE!". The famous chant echoed around Stamford Bridge as Chelsea celebrated their title win following their 5-3 victory over Manchester City. Before the games you could definitely sense the nerves around the stadium. If Chelsea won, they would be crowned champions, if they lost the gap would be cut giving City a good chance to overtake Chelsea if they were to slip up again. Chelsea have now done the quintuple (5 trophies). Mourinho can now surpass his own record of 94 points if he wins his last two games.

Mourinho was spotted celebrating wildly at full time, with his famous kneeslide! Mourinho is known for clearly showing his emotions when his side is playing and today it was a happy emotion. 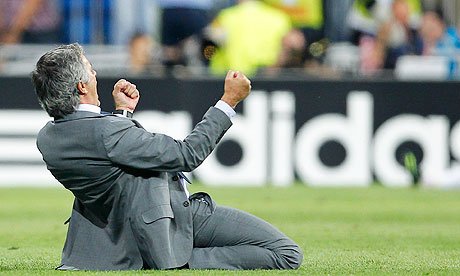 We managed to get some brief words from Mourinho before he went off to celebrate with the rest of the team:

We are the champions! I'm very proud of the team, this is trophy number 5 for the season. We still have two more we can win, which will not be easy, especially the champions league but for now we can celebrate a bit, excuse me I have to go and celebrate with the team!

The Chelsea board have publicly expressed their delight with Jose Mourinho. They have praised him for his hard work and have revealed Jose signed a new contract just before the Barcelona match. They believe Jose is the right man to lead Chelsea to even more glory.

Here are the statistics from the Chelsea vs City game: 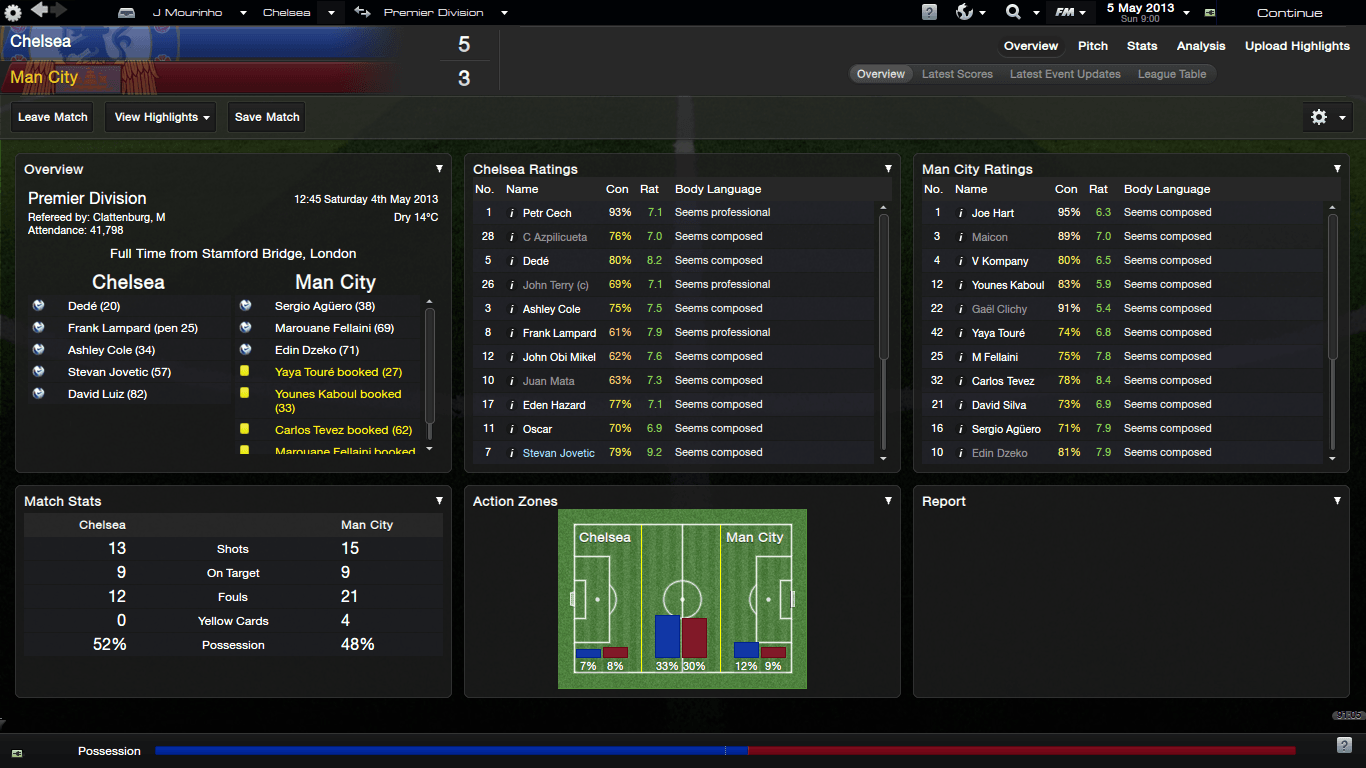 Here is the league table after the game that saw Chelsea being crowned as champions of England: 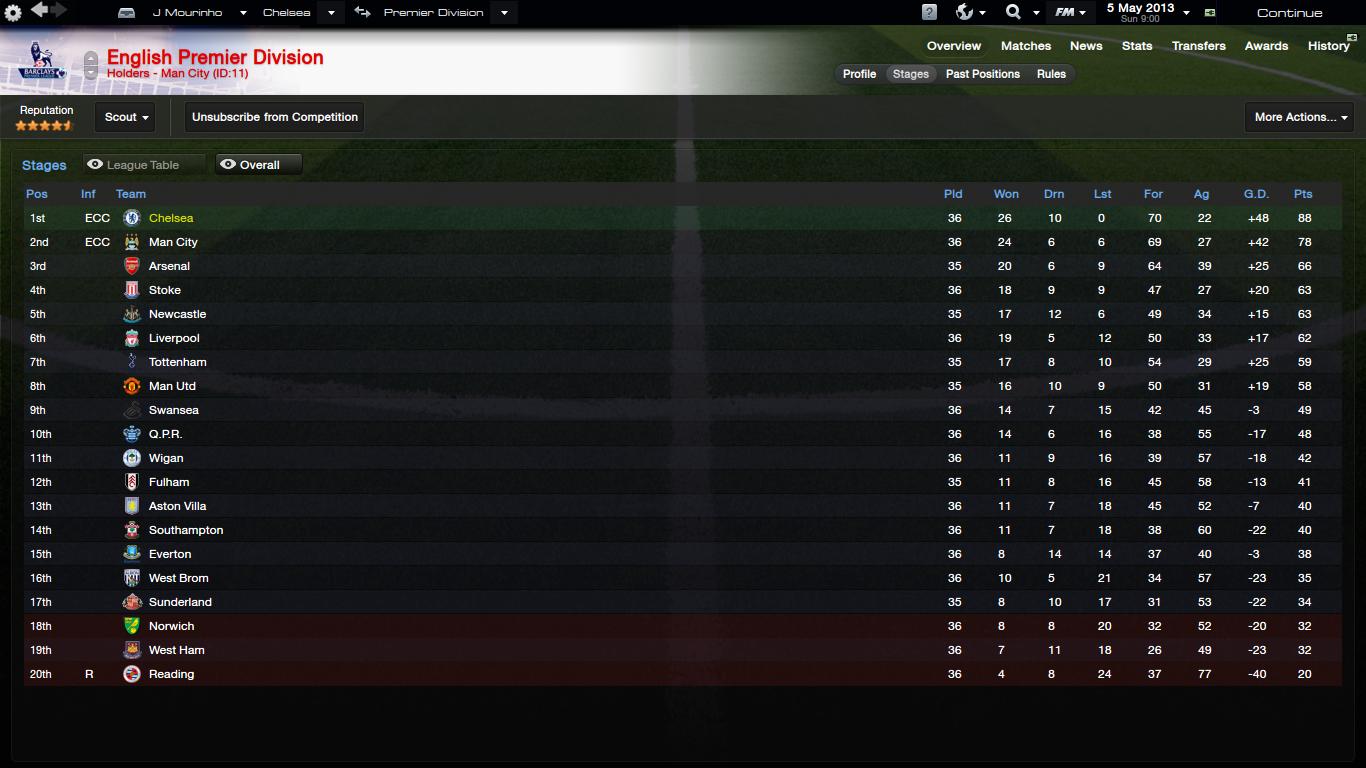 Congrats, to Chelsea FC, the champions of England!
Login to Quote

Joe
7 years
Brilliant mate, great to see Chelsea beasting...what tactic do u use???
Login to Quote

k1rups
7 years
What a result against Man City! Great work in lifting the title unbeaten Seni and great work against Barcelona.
Login to Quote

Here are some screenshots of my tactic: 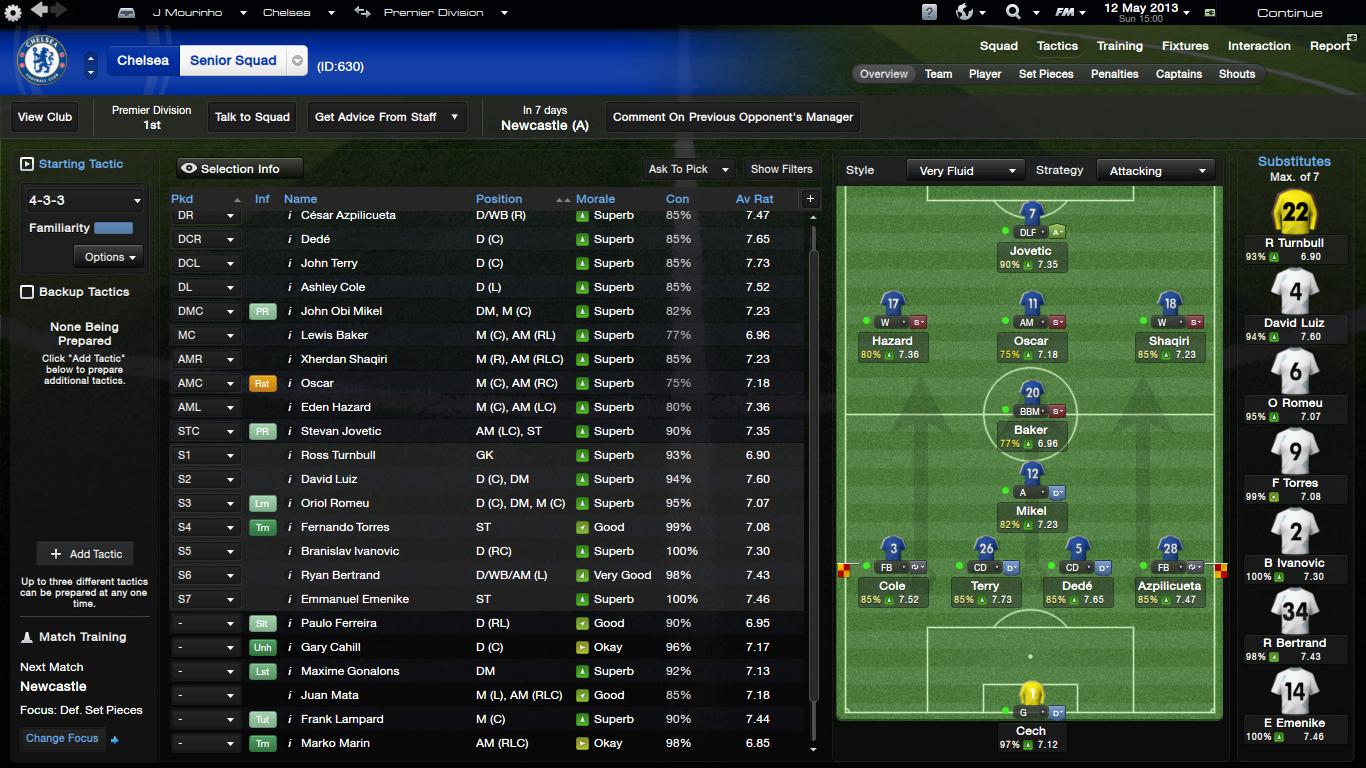 Thanks a lot, I'm hoping I can beat Bayern now
Login to Quote 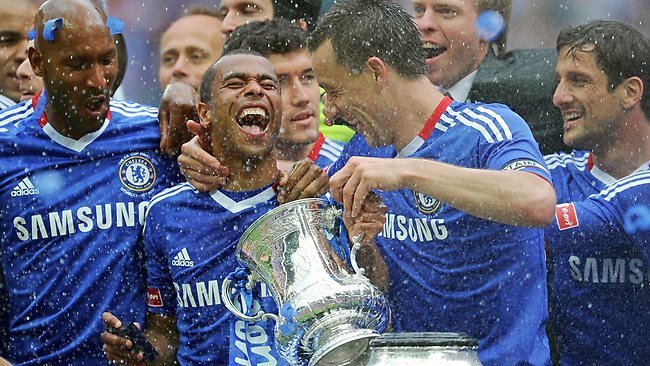 "Blue is the colour, football is the game, we're all together and winning is our aim, so cheer us on through the sun and rain, cause Chelsea, Chelsea is our name." Chelsea football club have done it again, they have continued their FA cup glory by defeating their London rivals, Tottenham, 3-1 at Wembley stadium. This means Chelsea have won 2 trophies in a week, literally. Before now, many would have thought that you could only do that in a video game, unlucky guys because Chelsea have just done it and its now trophy number 6!

Things didn't start to well for Chelsea when Xherdan Shaqiri scored a comical own goal in the 20th minute. It wasn't so funny for the 21 year old as he was left red faced. Soon his goal would be forgotten as samba boy, Oscar, equalized with a well timed finish. On the brink of half time 18 year old Lewis Baker, who has had a memorable season making 9 appearances for the first team gave Chelsea the lead. It was 2-1 going into half time. Tempers started to fly as Benoit Assou- Ekotto picked up his second yellow card, due to a horror tackle on Shaqiri. Tottenham still had hope as the score remained 2-1 going into the last 10 minutes, that was until Shaqiri redeemed himself with a brilliant goal in the 90th minute.

Unfortunately we couldn't get an interview with Mourinho but we managed to get one with 18 year old Lewis Baker, here's what he had to say:

Its a dream come true, to play for Chelsea's first team, to play in the FA cup final and then to go on and score, I'm just so happy right now. A big thanks must go to all my senior teammates who have tutored me, e.g Frank. Also a big thank you goes to Jose Mourinho for having faith in me. I thought he would ship me out on loan but he proved me wrong.

Chelsea have still got the champions league to play for. If they were to win that it would be trophy number 7 and they would have gone a whole season unbeaten. 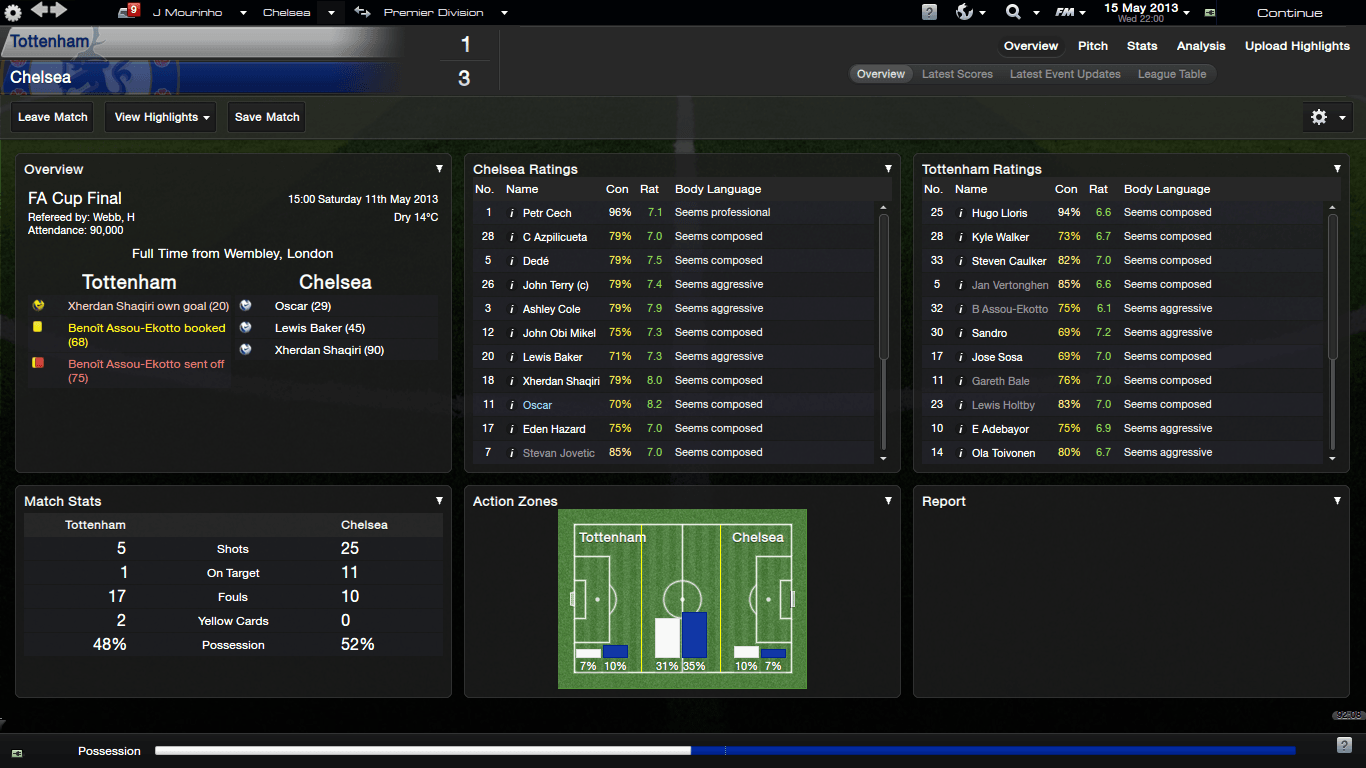 BOVIS86
7 years
can you do a screen shot of lewis baker please?
Login to Quote

Jozef
7 years
That's our cup. Seni, you need to win this every year or you will be deemed crap

. Congratulations on winning another trophy though.
Login to Quote

Champions of Europe, we know what we are! 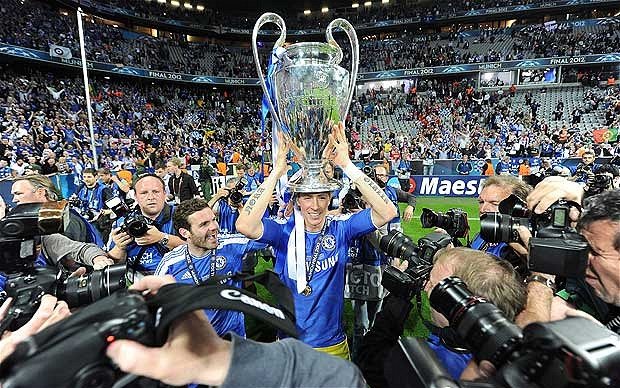 Before the final, Chelsea had to overcome both Barcelona and Real Madrid, two world class sides and they managed to do that superbly. Just like last year they were underdogs, even going into the final they were the underdogs but they prevailed yet again to win their 7th trophy of the season. A remarkable accomplishment. The match started off with Bayern pressing and attacking through Ribery and Robben on the wings, challenges were flying but Chelsea remained solid at the back. After a while Chelsea quit defending and starting attacking themselves and scored through David Luiz on the 38th minute. The fans went wild, the players went wild but Jose remained calm. You could see the frustration on the Bayern fans faces, they were furious. This started to affect their game as due to poor defending Emmenike was one on one with Neur and he slotted the ball into the empty net 2-0. At this point Bayern were completely demoralized. Chelsea started to add a bit of flair to the game and this resulted to John Terry getting the third goal and rounding up a brilliant performance.

Jose Mourinho spoke to us about this win and the season, here's what he had to say:

A very good performance from the boys tonight and now this is trophy number 7! Bayern didn't really show up today and despite this loss they are still a very strong team and I expect them to bounce back next year. I couldn't have asked for a better homecoming season than this. The fans have been superb, game in game out they chant and support us. They give us extra motivation. The staff here at the club have been working extremely hard. The players have been superb this season, in training you see them putting in extra effort and eventually that shows on the pitch. Now many would say we have achieved all we can this season and so what's next for this club? Well who says we can't achieve it all again. Like I said we want to dethrone United and you can't just do that in one season. Some players are leaving the club this summer for example Torres and Marko Marin while players such as Yassine Benzia are coming in. We are looking forward to next season but for now we need to rest and get ready for pre-season as we must work even harder to retain all our titles.


A very powerful interview from Jose Mourinho,despite being brilliant this season he still wants more. 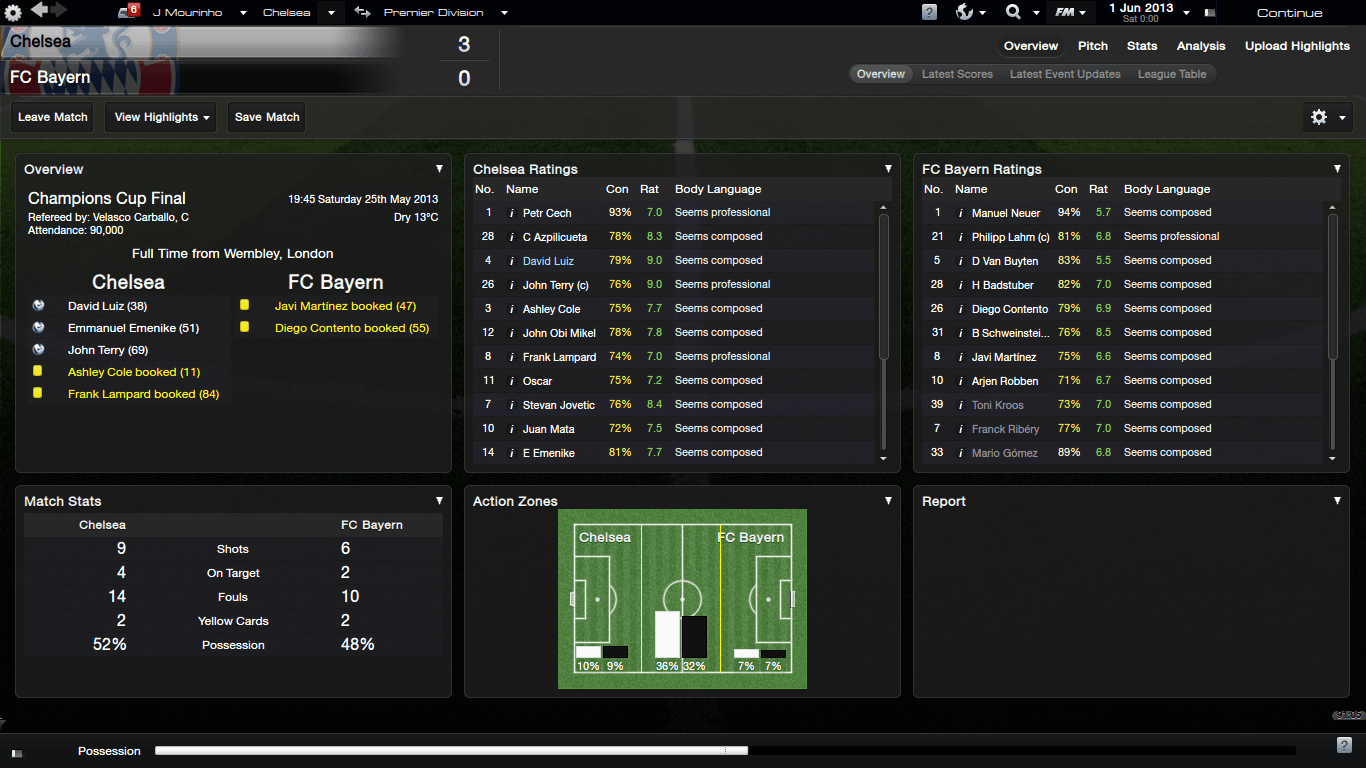 k1rups
7 years
Too easy for the Special One! Winning everything in sight! Great wins and updates Seni
Login to Quote

Seni
7 years
Thanks for all the comments guys, I know I'm even finding it a bit too easy!


Here's a screenshot of Lewis Baker: 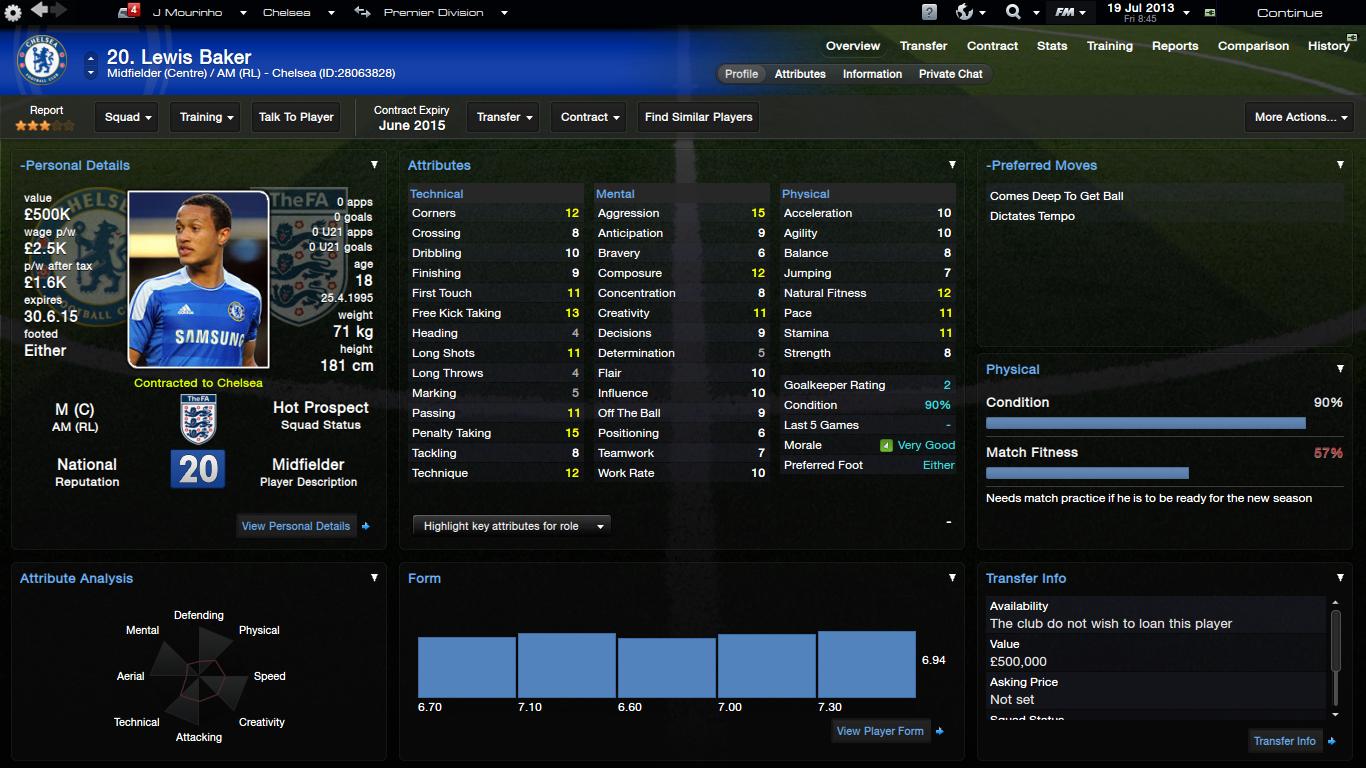 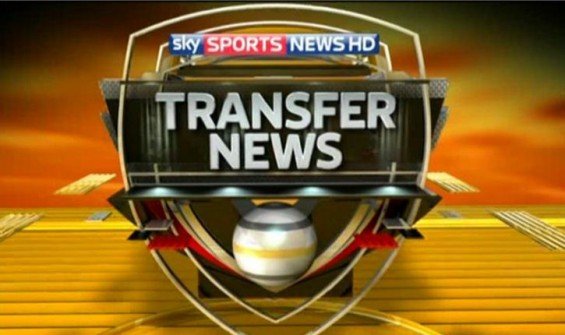 Chelsea manager, Jose Mourinho has spent around 40 million pounds on various youngsters in this summer transfer market. Marco Verratti, Yassine Benzia, Wallace, Cuevas and Maupay have all been bought for a total fee of 37.5 million. The board refused to allow Jose to spend too much money and so it seems he has spent wisely. Verratti and Benzia are rated very highly to become superstars in the future. The likes of Thorgan Hazard, Nathaniel Chalobah, and Thibaut Courtois will not be going out on loan this season.

In this summer transfer market, Chelsea also had to say good bye to a few of their players. Both John Obi Mikel and Michael Essien left the club and have now joined French giants PSG. Marco Marin joined Stuggart and Fernando Torres who seemed to be regaining his form has joined Porto. Gary Cahill has gone out on loan to Swansea City.

Chelsea will be looking to retain all the title they won although that will be almost impossible to accomplish. Still they will be positive that they can do it and perform very well today.
Login to Quote

You are reading "Bring back the special one!: Chelsea FC".