Tjozzy
9 years • Edited
After a steady pre-season, It was a task to install the Tika Taka sort of style the new manager was looking to install and with many new players arriving, the board offered Zola decent funds but the manager decided to sell a few players.
Many of the players sold were decent players but the club had decent offers for them which gave the manager the extra funds to really improve the squad long term. 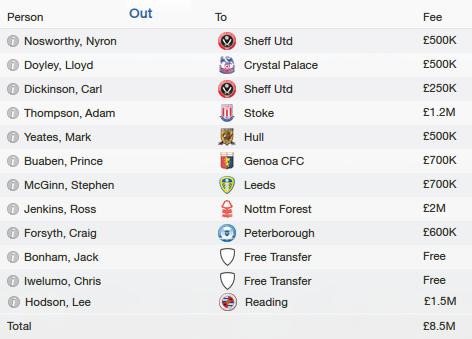 TOM INCE -3.5M/6M- The other 2.5 mil would be paid after 10 international caps, He was a young player who I thought I could develop, His verstility was also a key.

MIKKEL DISKERUD - 600K- The USA international has decent stats for a 21 year old & will certainly improve into a decent CM, Perfect Championship player for this season.

GINO PERUZZI -2.9M- Lacking Youth at the back, Peruzzi was a target I chased all summer. He is far better than Championship level but knowing he was keen I couldn’t turn down the chance, can develop into a top full back.

SANCHEZ MINO -2M- Argentine’s from both RB & LB this season, Mino doesn’t look as good as Peruzzi but has solid enough stats and can hopefully improve, idea was him and Peruzzi are then ready for the Premier league.

RAFAEL TOLOI -1M- Another South American, Another bargain, 1M upfront for Toloi, although another 1.7 after 10 international caps which is never going to happen so a top Champ defender for 1mil...DONE!

FELIPE SOUTTO -900K- Yet another South American but the amount of cheap quality players is crazy, For a 21 year old If Soutto can develop his passing and tackling up a bit he could become a future Brazil international.

OLE SALNAES -500K- This kids stats are already brilliant, a little training work and an intro to First team football should help him, if not a loan move would be around the corner.

ADAM LE FONDRE –LOAN- Needed a back up option for Vydra, Le Fondre on loan ticked all the boxes

To be fair he isn't as good as irl, i understand!

Can't wait to see what you do with us!

Just a hint, Forestieri and Murray both turn into class Premier League players

Tjozzy
9 years • Edited
THE CHAMPIONSHIP SEASON IS UNDER WAY........

First up for The Hornets was a tricky game for Zola's young players away to promotion hopefulls, Cardiff City.

A decent result really considering the team were 2-0 down after 20 mins. Vydra made the perfect start to his Watford career grabbing a brace to even it up 2-2, until Craig Bellamy scored a 78th min penalty, it stayed that way until a free kick put in from Almen Abdi was smashed into his own net my Mark Hudson securing Watford a decent point in th end.

The first month under new management proved a decent month with the team undefeated and starting to find their feet with the new style of play, Ahmen Abdi racked up 3 goals this month with an average rating of 9.00 in 3 league games until he broke his ankle a 2nd half sub against MK Dons in the league cup which will keep hiim out til late November, a huge blow consudering I just agreed for him to join for 2mil in January... but can hopefully bring other young players through.
Login to Quote

Okikos
9 years
You have a great squad, and similarly great results! Keep it up

patrick1
9 years
Ill be keeping an eye on this story mainly to see how Chalobah performs!!!
Login to Quote

Bert
9 years
I like what you've done with the squad

If we could get something like this this season I'd be a very happy :L

(How did you get Abdi for 2m? For me on classic mode he is too expensive!)
Login to Quote JANUARY
Lying 3rd in the league only 2 points behind 2nd placed Wolves and 4 points behind leaders Cardiff.
Vydra's 11 goals, forresteri was skipping past defenders after playing him on the right, Ince was a menace on the other side. Young Hoban was improving brilliantly after a huge exposure to first team football.

LUCAS ROMERO JOINS WATFORD
18 Year old CM, Romero was a player that got my intrest when he wanted out of Velez and with them only wanting 3.5m it was a must, I managed to beat Sevilla & Rubin to for his signature which was quite impressive.

If we could get something like this this season I'd be a very happy :L

(How did you get Abdi for 2m? For me on classic mode he is too expensive!)

When he Broke his ankle Udinses transfer listed him for some reason and set his status as not need by club, so it was a must.
Nathaniel's transfer could rise, well will rise to 7.5mil after 10 international caps
which will happen but not for 2-3 years when I hopefully sitting pretty in the Premier League.
1
Login to Quote 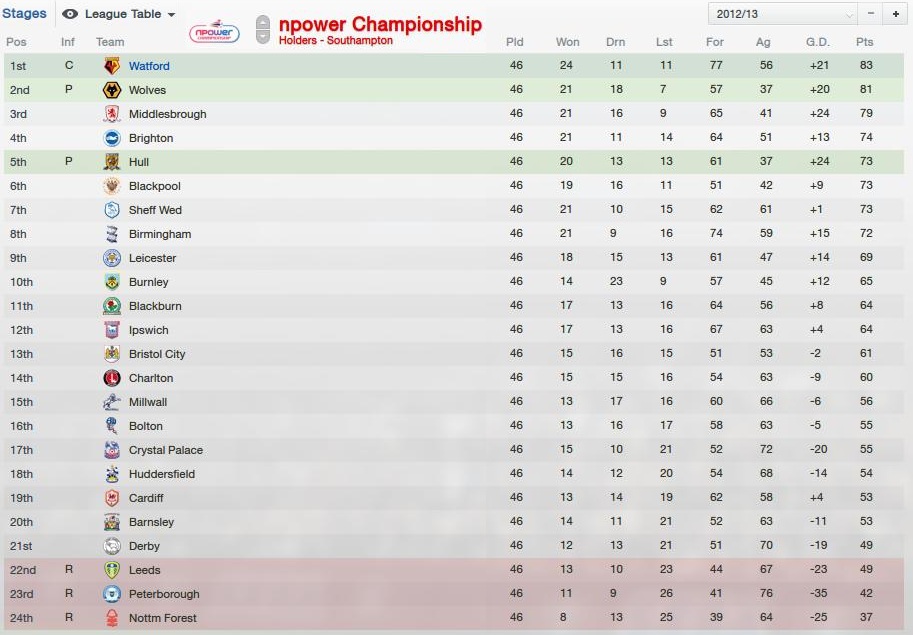 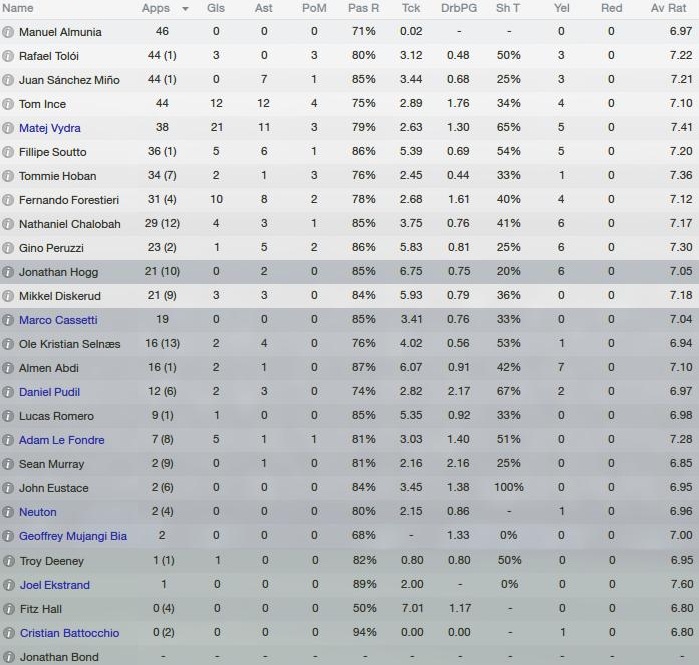 5 KEY HORNETS WHO STUNG THE CHAMPIONSIP

MATEJ VYDRA- After 21 league goals & an even more impressive 11 assists from the Czech forward, he was awarded the Club & League player of the year award, A must sign for next season.

TOM INCE- Ince has improved hugely over the season, Individual training on specific attributes have improved him. Although scoring a few penalties, Ince bagged 13 league goals & 11 assists. I was slightly disappointed with his AVR, but his technical develop has been superb.

FELIPE SOUTTO- The Brazilian dominated the midfield this year, especially when playing further forward although next year could see him play deeper, His 8 goals were impressive as was his development technically.

NANDO FORESTIERI- The young whiz kid had been taught to play on the right this year and has not let me down, although some inconstancy, 10 goals & 10 assists is superb from the ‘Messi of The Championship ’

TOMMIE HOBAN- Hoban wasn’t initially in my plans but a long term injury to Neuton gave him a chance & her never looked back, the exposure to first team football has obviously improved him greatly with a solid AVR of 7.35 & formed a great partnership with Rafa Toloi.

You are reading "Zola has a plan for Watford...".