After much speculation and debate the deal that was expected to go through has been cancelled. Only a few weeks ago Hannover sent a bid to Porto enquiring about the availability of Atsu to be told they could have him for ten million Euro's. Zeeb was not having it. Counter offering with what is expected to be six million. Eventually the two parties agreed on a deal in the middle of eight million for the Ghanian winger. This seems little for a player who was dubbed 'Ghana's Messi' only a few years back. It proved not enough for Atsu as he told Hannover officials that he had no intention of joining the German club after Zeeb released a few statements on how much he would love to see Christian pull on a Hannover jersey. Many fans were excited about having the prospect at the club but Zeeb has told them not to worry. Apparently he has others in his plans. SkySports has linked Zeeb and Hannover with two other left-wingers Wolverhampton's Bakary Sako and FC Red Bull Salzburg's Sadio Mane.

In other news Hannover face Havelse in the German Cup in the coming days and the Europa League drew the next round of qualifying fixtures. Hannover drew scottish side Heart of Midlothian. Deleted
9 years
Unlucky. £8 million may have been too pricey anyway
Login to Quote

Havelse bring nothing to the table in German Cup battle

It was a sad day for Havelse supporters as they watched there beloved team uprooted by a far superior German side. Hannover didn't surprise anyone with their performance today. Though it wouldn't have boosted much confidence either way as Havelse isn't even a Professional side.

Around the AWD-Arena there has been much controversy as fans and supporters alike attempt to evaluate whether Die Roten are truly playing well or if their opponents are even giving them a game. Fans hope to see the truth of it come Sunday the 26th when they open the Bundesliga season against Furth. This game comes after the first round against Heart of Midlothian on Thursday the 23rd.

Ziechael
9 years
A simply superb run of results. Well put together story as also, keep up the good work and i'll keep coming back with comments

Hearts come to the AWD-Arena

Predictions and assumptions have been made and many believe Heart's will actually give Die Roten a run for their money this time round. Unfortunately for the Jambos the pocket of hope hasn't swayed in their way when it comes to odds. With Hannover's continued form running it seems only likely the German side will bring a game to the Scott's, especially with the game taking place at the 96's home. Heart's would have like to have the home advantage first time round but newly come Heart's manager John McGlynn stated that having the last game at Home makes the difference incase they go down points.

Along with this Zeeb will have to take into count that there first game of the Bundesliga season is just upon them. If he chooses to play a serious starting XI today he risks making the expected victory against Furth more of a speculated victory.

Deleted
9 years
Sobiech looking like the man. I know Huszti is good for sure
Login to Quote

Yeah those two are working well together. Sobiech is quite creative and I am using him as a DLF which is good
Login to Quote

Great results so far, and great updates too.
1
Login to Quote

http://www.vavel.com/files/bundesliga_logo_649212961.jpg
With the season opener behind us its time to reflect on the first days of fixtures. Nurnberg and Borussia Dortmund got the whirlwind blowing as they took to the stage at Der Club's (Nurnberg) home ground. Dortmund turned on the fire, well namely Blaszczykowski who pulled in a wonderful performance scoring no less than three goals for the BVB 0-3. Elsewhere the next day Hoffenhiem and Dusseldorf weren't able to find a significant as they finished 0-0. The Gladbach and Werder Bremen game followed the Schalke and Leverkusen game. As Gladbach and Leverkusen won their fixtures 2-1. Frankfurt pulled on a show at home when they beat relegation fighter Ausburg 2-0. It was no surprise for Hamburg fans when they dismantled Mainz 4-1 at home. Freiburg pulled up there socks to beat Wolfsburg away from home 2-3, perhaps the surprise of the fixtures. Unsurprisingly Bayern handed it to Stuttgart 2-0 Pizarro getting the pick of the goals with an absolute blinder. And Finally.


Reportedly Zeeb was unhappy with his teams game. Expecting more goals. With Hannover's fans expecting more of a game to actually see whether their team may mount a serious threat in the Bundesliga. They will have to wait till next Sunday when their team heads to Dusseldorf.

sponge11rofc
9 years
Good start to the season irrespective of wanting more goals the first is the hardest to win, good pre-season too. Sobiech looks to have started off on a role

Beno Zeeb at a press conference today confirmed that FC Red Bull Salzburg left winger Sadio Mane has joined the club for a fee thought to be near the 8m Euro's region. Mane explained his excitement to move to Hannover 96 because of the league they participate in. Like many players the Bundesliga and many other big European Leagues draw players from around the world. Mane is expected to get his debut with Hannover after the transfer window when Hannover got to Dusseldorf. It is also thought that Mane believes that Hannover control more of a foothold in European Tournaments unlike Salzburg who consistently do not meet the standards required in the Champions League, and usually get dropped out early in the competition. 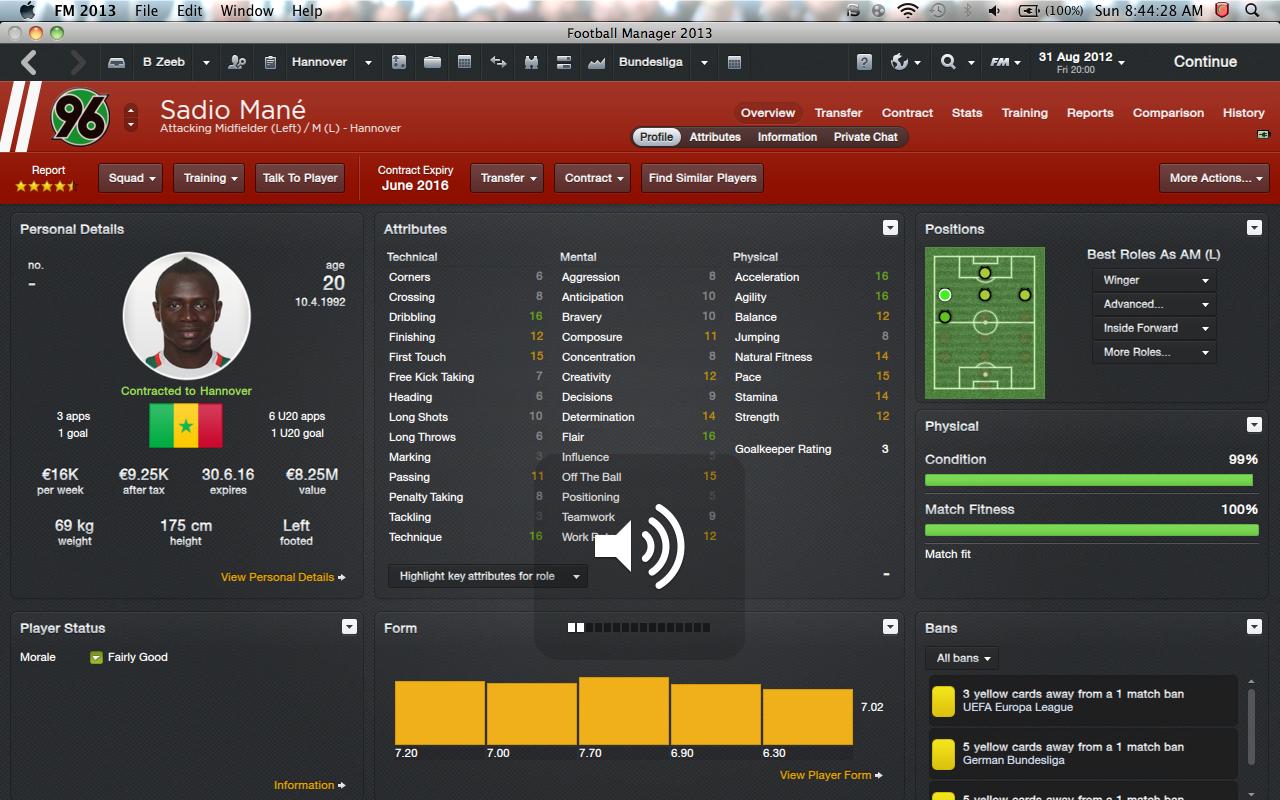 Hannover also had their second game against Heart of Midlothian today which went well for Zeeb and company. As soon as Hannover got the first goal of the game it looked as if it were game over for the Scottish Side.

Neal
9 years
Mane should be a good signing, keep it up
Login to Quote