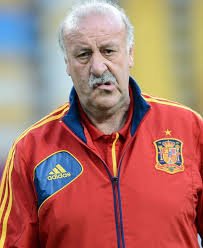 Vicente Del Bosque has sensationally been sacked from his position as Spain manager after being deemed to ugly for the national side. the search starts for a replacement Del Bosque had a very successful time in charge of spain which included 2 European Championships and a World Cup whilst also introducing " Tiki Taka " to the National setup, he will be sorely missed


hahahaahahahah thanks mate .
Login to Quote 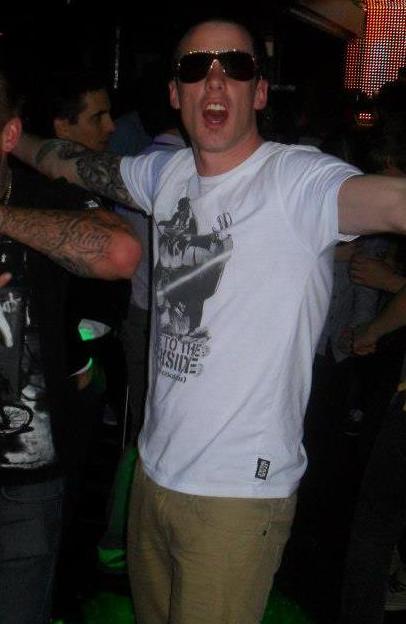 Spain have shocked the world by appointing little known Shane Swanston as manager, with most fans wondering what was going through the minds of the Spanish board with Guardiola , Luis Enrique and various other higher profile managers also putting there names forward for the job. but shane has stated he has all the required tools to continue the dominance of La Roja for years to come .... shane Swanston is his youth days ( pictured )

Who is Shane Swanston

Shane Swanston is an ex amateur footballer who played his whole career in Australia and the NSW Premier League with the Belconnen Blue Devils before suffering a double leg break at training which put an end to his career. Shane than turned his head to management with his former club, he emphasis is that his team play a short passing possession game while pressing high up the field,

no longer than 24 hours of being in the Job spain have announced assistant manager Toni Grande and Under 21 manager Marc Guitart have been removed from there jobs with Francisco Ayestrian being appointed as assistant manager and Eusebio will now take control of the Under 21's hoping he can produce the best out of the youngsters as he can. with the appointments Shane has shown he isnt afraid to make his own decisions despite the egos that come with this highly talented Spain squad 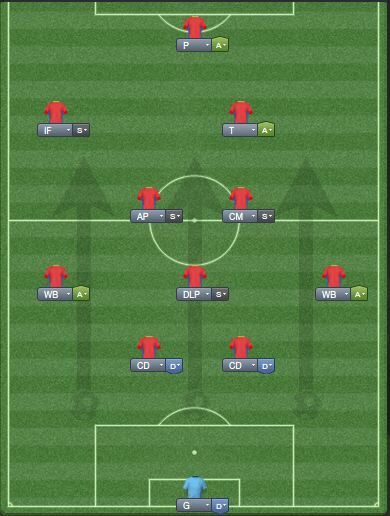 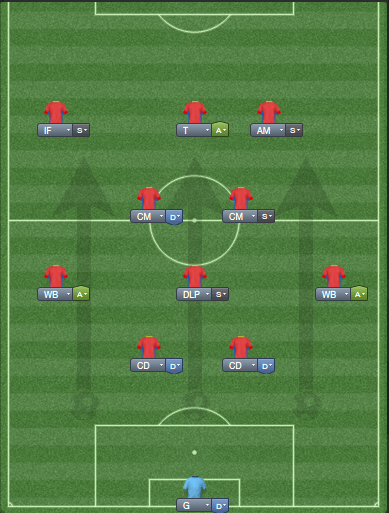 i firmly believe these 2 very attacking formations will give us the edge because of our constant attacking and slick passing movement, and the obvious high technique level of all the players at my disposal

any comments , positive or negative are highly appreciated and also gove me advice on story writing to 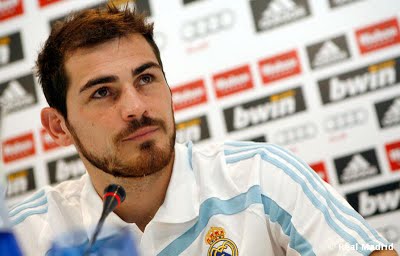 Pictures from Iker Casillas pre match press conference , questions were flowing in todays conference room regarding his thoughts on the new man in charge Shane Swanston and his thoughts on the game ahead against Serbia.
when asked about Swanston's lack of managerial experience Casillas looked up toward the camera with a gleaming smile on his face " everything is fine with his Ideas and methods towards our football, he wants us to play Tiki Taka but to also move the ball alot faster around which we like , so we are happy .. only time will tell " which was followed by " we will not underestimate Serbia by any means "


heres a quick look at the squad,

David Villa and Cristian Tello were removed due to injury in Barcelona's last friendly before the match so they took no part in this friendly. Benat was included in the squad with later pulled a disc in his back so he was replaced by Erik Lamelawho i feel can play a big part in the future for Spain. Roberto Soldado was bought in to replace Spain's all time leading goal scorer David Villa


though it is only a friendly i was always looking to play the strongest available squad,we will definitly look to bring in possible stars of the future when they are ready
Login to Quote 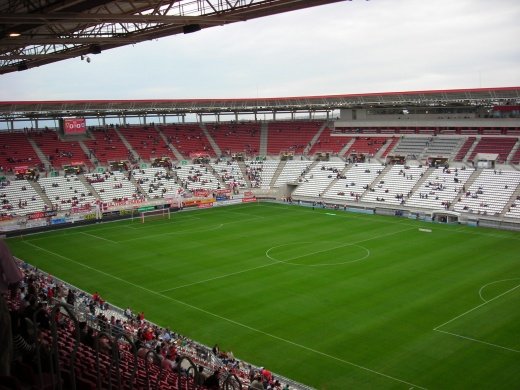 as Spanish and Serbian fans slowly entered Estadio Nueva Condomnia you could tell the fans felt more of this match as just a friendly, this may not be the Camp Nou or the Bernabeu but Nueva has a very hostile feel about it and La Roja were more than confident they could get a win first up for there new boss Shane Swanston 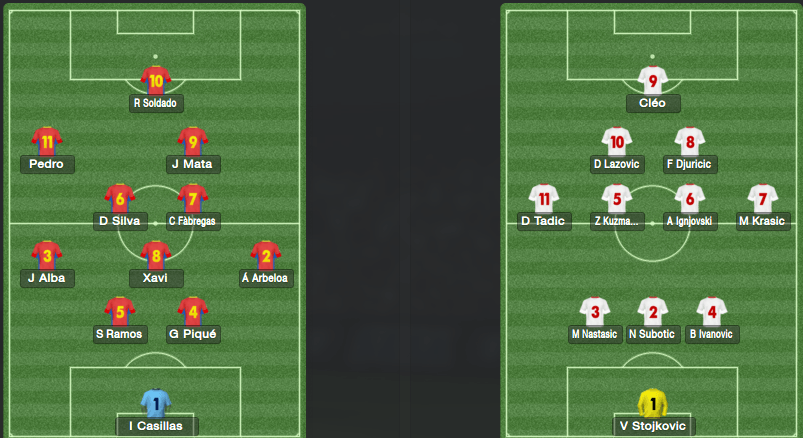 injuries to key players meant David Silva , Pedro and Soldado started this match , but with every chance to knock on the door when the world cup qualifiers come around. i set the team out in a 2-3-2-2-1 formation hoping to dominate possession and not let Serbia into the game, getting an early goal would settle any nerves and set us on our way 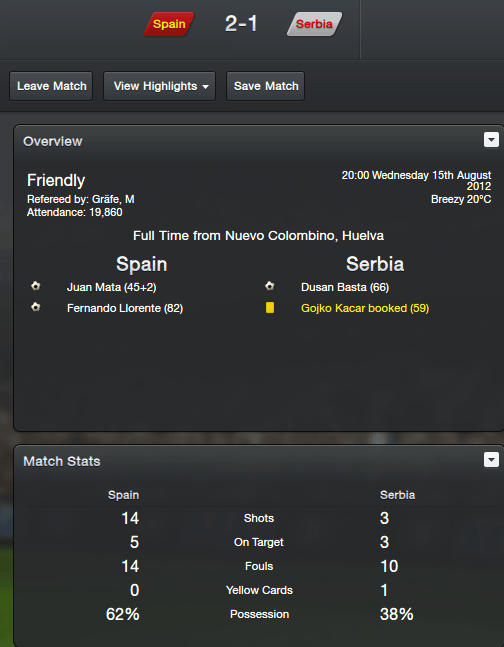 a confident 2-1 win for our boys. despite them scoring the 1 goal Serbia were never really in the contest and only caught us on the counter because of the players we were throwing forward looking for that second goal.
things are looking good for our World Cup Qualifier double header next month
Login to Quote

Cheers mate =] anything else I should update??
Login to Quote

Cheers mate =] anything else I should update??


Maybe updates on how players are doing monthly with their clubs etc.?
Login to Quote

Cheers mate =] anything else I should update??
[/quote
]Maybe updates on how players are doing monthly with their clubs etc.?

Alrighty ill try that. Anything to make it more enjoyable for the readers 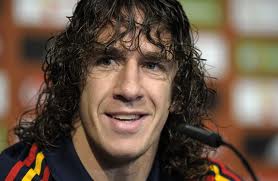 Carles Puyol has decided to call time on his international career whilst talking about his Barcelona future today, the decision doesnt come as a huge shock to spanish fans as Carles Puyol has been struggling for fitness for some time now.
Puyol won his first cap for Spain on 15 November 2000 against the Netherlands, and remained a regular fixture in the following years. He played for the nation at the 2000 Olympics, 2002 FIFA World Cup, UEFA Euro 2004, 2006 World Cup, Euro 2008, 2009 FIFA Confederations Cup and the 2010 World Cup.
At Euro 2008 Puyol started throughout the vast majority of the competition, as the defensive backline only conceded two goals in five games in an eventual final win against Germany. He was named in the Team of the Tournament alongside defensive partner Carlos Marchena, of Valencia CF. He started in three out of five at the 2009 FIFA Confederations Cup, and captained the team when Iker Casillas was rested for the last group stage match; as Spain finished third, he and four other teammates were named in the Team of the Tournament.
At the 2010 World Cup in South Africa, Puyol started every match and played almost every minute (he was substituted by Marchena in the 84th minute of the quarter-final against Paraguay). He scored the only goal in the semifinal against Germany with a powerful header from a corner taken by Barcelona teammate Xavi, sending the national team through to their first World Cup final, and scoring his third international goal in 89 matches; in the decisive match, he played the full 120 minutes as Spain defeated the Netherlands 1–0.
On 1 August 2010, 32-year Puyol announced that he would continue to play for the national team for at least another two years. He missed the Euro 2012 tournament due to a knee injury contracted in a league game against RCD Espanyol in early May, which required surgery and five to six weeks recuperation.
Puyol played his 100th international on 6 February 2013, captaining Spain to a 3–1 friendly win over Uruguay in Doha, Qatar 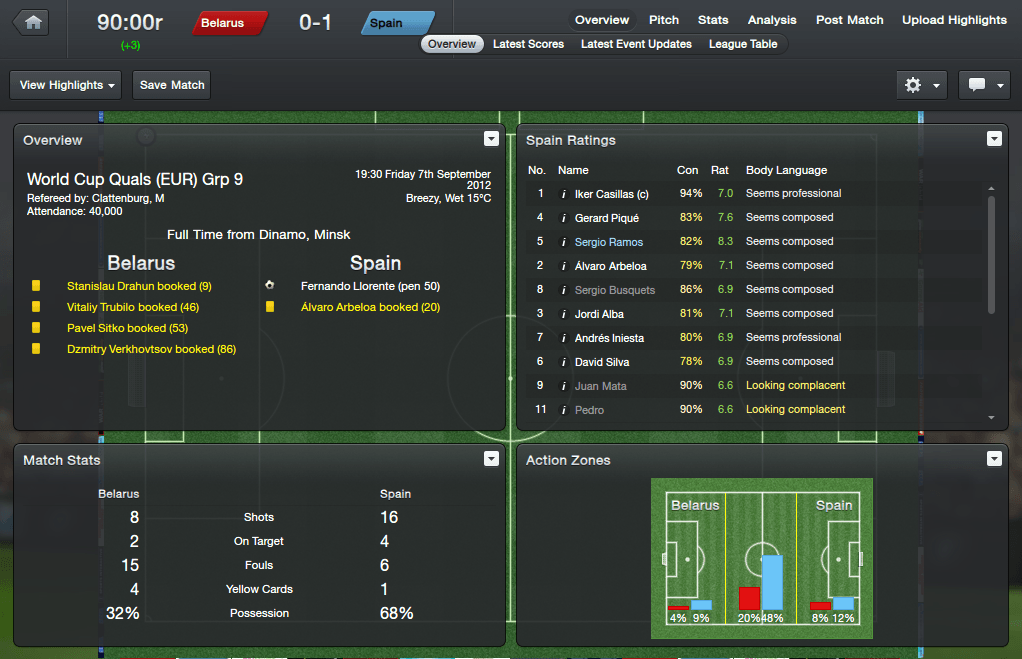 a very frustrating but rewarding 1-0 over Belarus, we absolutely dominated the match but yet again our wastefulness in front of goal was evident, changes may have to be made for our next qualifier against Georgia at home in 4 days time
Login to Quote 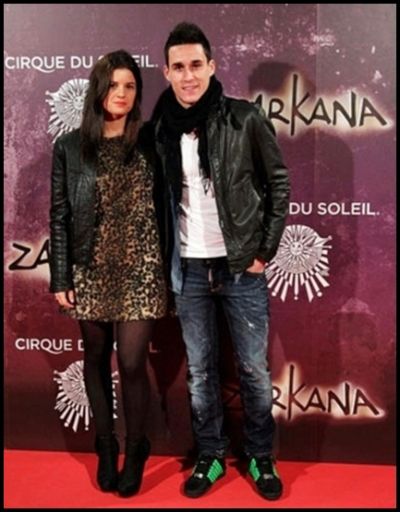 Callejon seen here with his fiance just hours after putting pen to paper with Chelsea, both looking in good spirits, will this move help his chances of being included in upcoming Spain squads ? only time will tell
Login to Quote

I hope you will manage to finish second of your group

I hope you will manage to finish second of your group

You are reading "La Roja - the dominance continues".