Duncanwilliam7
9 years
Update 2
In my second update of my Shakhtar Donetsk story i will be giving you lads the full Monty, everything you need to know about my current situation in my save.

The information will range from attendances, to Youtube videos of some of my best goals so far. So far I have been winning most games and my team are playing very well in the league and playing decently in Europe.

Ive have a few rough patches, but nothing to serious. One being the losses against Dynamo kyiv who I can not seem to overcome. Another being the big defeats suffered to Manchester united.

Besides the losses, its all been going ship shape in Donetsk, and some great performances form my Attacking midfielders Douglas Costa and Willian. They have been fundamental to my success so far this season.

Shakhtar Donetsk are currently on a 2 month break from all football, will continue in the league in February. 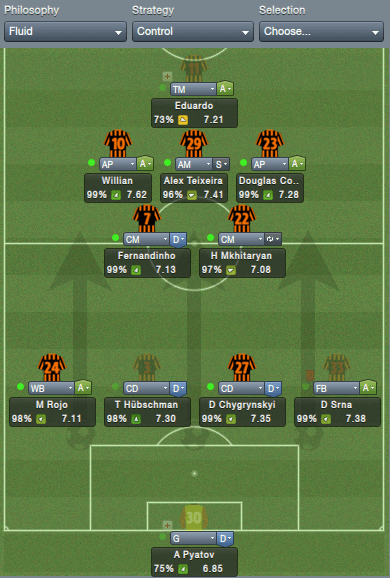 This is the formation I most often, as you can see Rojo has started to setting in at the club and his recent performances have started to incline.

After squandering an 8 point lead at the top of the table earlier this season, I have managed to reclaim it and now sit comfortably at the top with a 5 point gap between me and Dynamo kyiv. 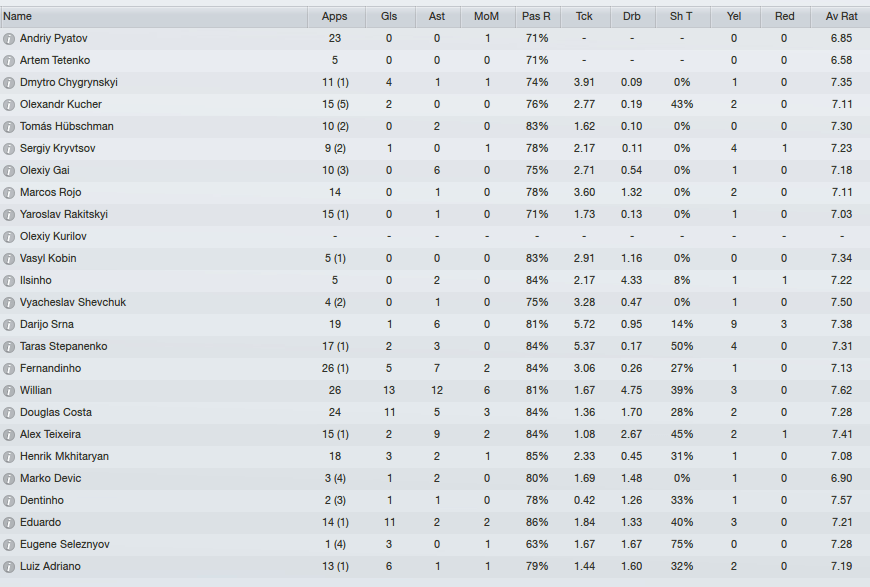 As you can see in this screenshot, my best performers are my Attacking midfielders and my Forwards, they really carry the team with their fantastic performances. I am currently a bit concerned about Pyatov's recent form, can anyone advise me what to do about this? 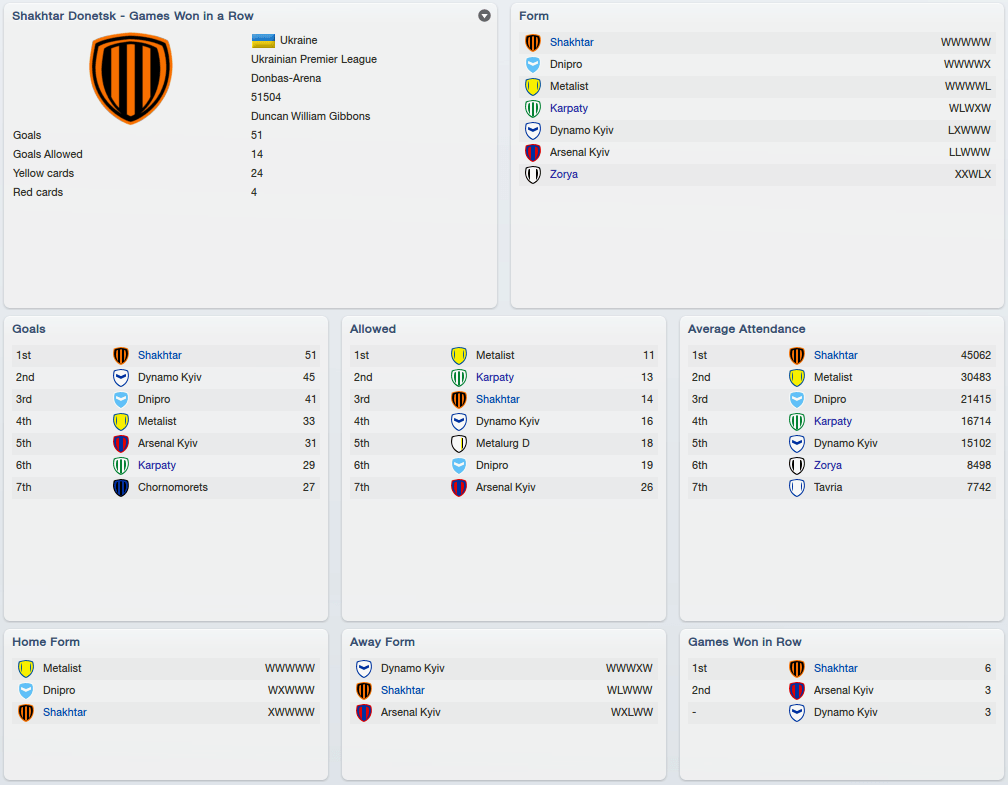 Great to see my side at the top of most of the categories in this screenshot, especially the average attendances one, seeing as it is only the Ukrainian League after all. 45 062 supporters per game is quite impressive if you ask me.

Dont ask me how Moreno got sold, I think my chairman is doing underhand deals with my players. But not a bad deal actually £6M for him is a decent amount of cash, and he struggles to get game time at Shakhtar. 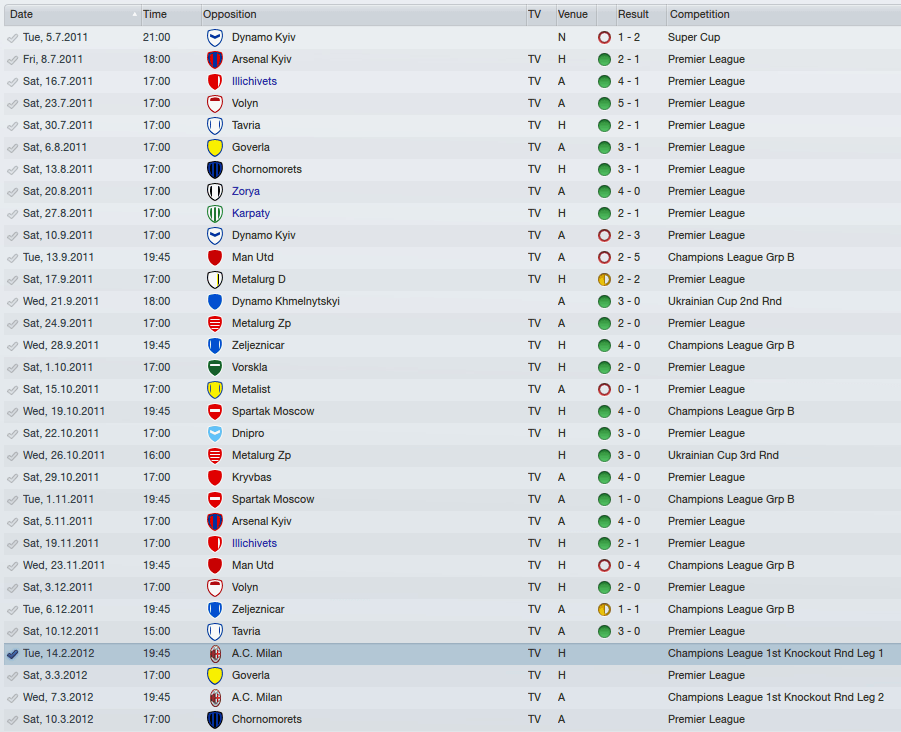 Some great results here, although I can not seem to overcome Dynamo Kyiv in all competitions. The Champions league has been fairly good, after all I didnt make it to the Knockout phase, but got hammered by Manchester united. Next up is AC Milan which will be a tough one. 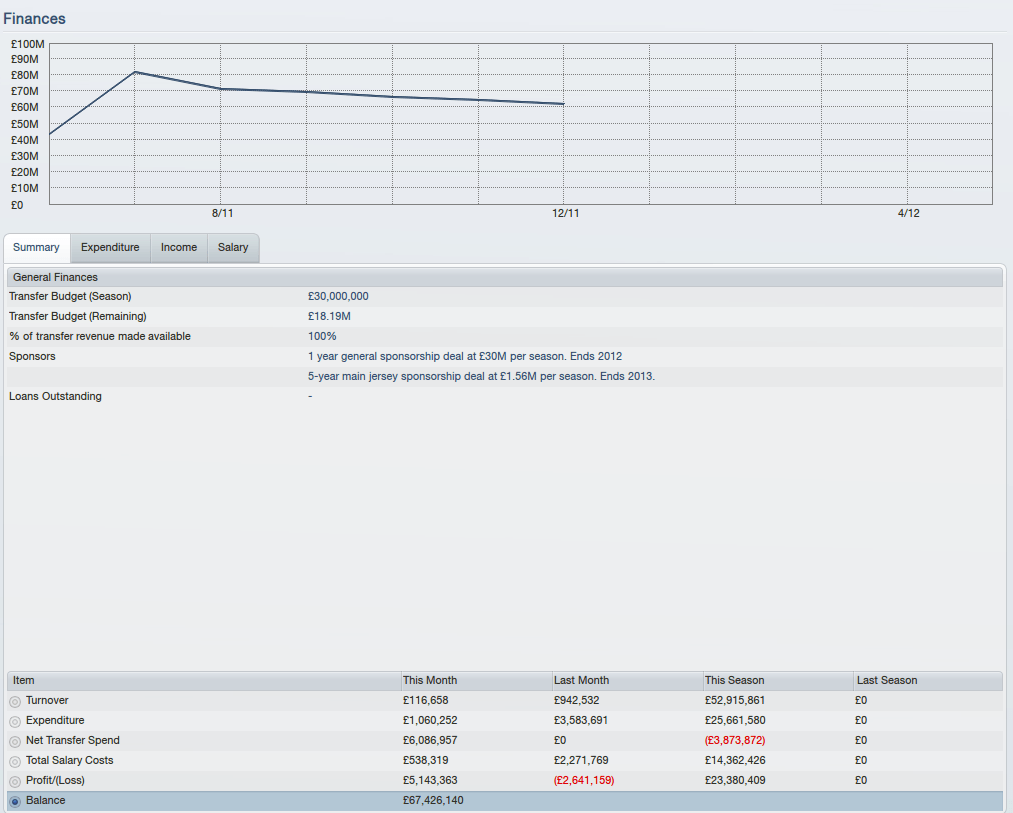 nothing out of the ordinary here, just a few transfers here and there that brought my balance down a little bit. 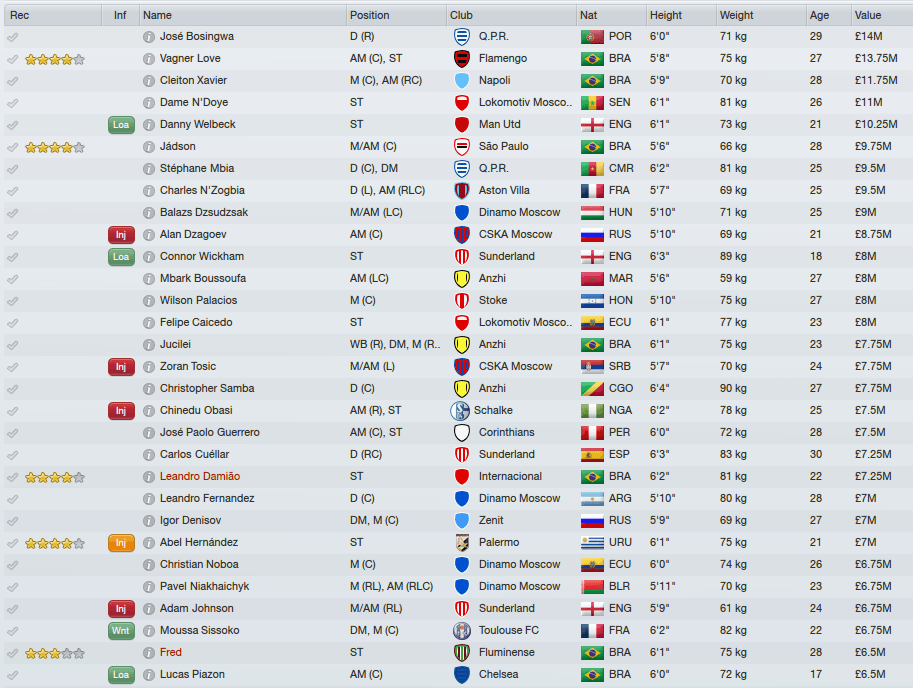 Here is my shortlist of players that are willing to join Shakhtar, so if you think I should buy anyone please tell me

Some real crackers here i must admit, my favourite of the lot I probably that fantastic strike from Fernandinho with the outside of his boot.

That's all for this update, please feel free to comment or give me suggestions on whatever your heart desires.

It is currently the January transfer window, so tell me who you think I should Buy and Sell

Okikos
9 years
I must admit, it is very weird seeing some players there that have already transferred in real life, but keep up the good work! Although- it would take a while to get through your updates

As for transfers, I doubt I could give you the best advice- I'm still learning the ropes and bargains myself!
Login to Quote

2013-06-10 15:34#110849 Okikos : I must admit, it is very weird seeing some players there that have already transferred in real life, but keep up the good work! Although- it would take a while to get through your updates

As for transfers, I doubt I could give you the best advice- I'm still learning the ropes and bargains myself!

No probs, thanks for the feedback mate

News just in, Milan knocked me out of the Champs league

k1rups
9 years
Nice stuff with the updates mate! Like the start of the story a lot. Marcos Rojo is a great buy at just £12.5 million. He's quality for me in my Lyon save! Will be interesting to see how you strengthen next season!
Login to Quote

Thanks mate, yeah he is starting to gel with the other lads now. Had a few dodgy games in the beginning.

I have a surprise signing that I will unveil when I do my nest Update, Got to start calming down in the transfer market. have loaned out a few players to compensate for the transfer money going out.

Still haven found a buyer for Luiz
Login to Quote

Duncanwilliam7
9 years
Update 3
End of my first season in charge and all is well really, a few disappointments, but they were outweighed by the positives. Only managed one trophy thought, the Ukrainian Premier League trophy, But im sure next season we will be able to get more.

Looking at selling of 2 or 3 of my foreign players and bringing in Griezmann and 2 Ukrainian players. Probably Luiz Adriano and Alex Texeira if I can get enough money for them. Hubschman might be another option.

Left it a bit late, and Dynamo gain some ground on me towards the end of the season, so had to beat them in a play off game. Weird I thought all leagues used the goal difference. 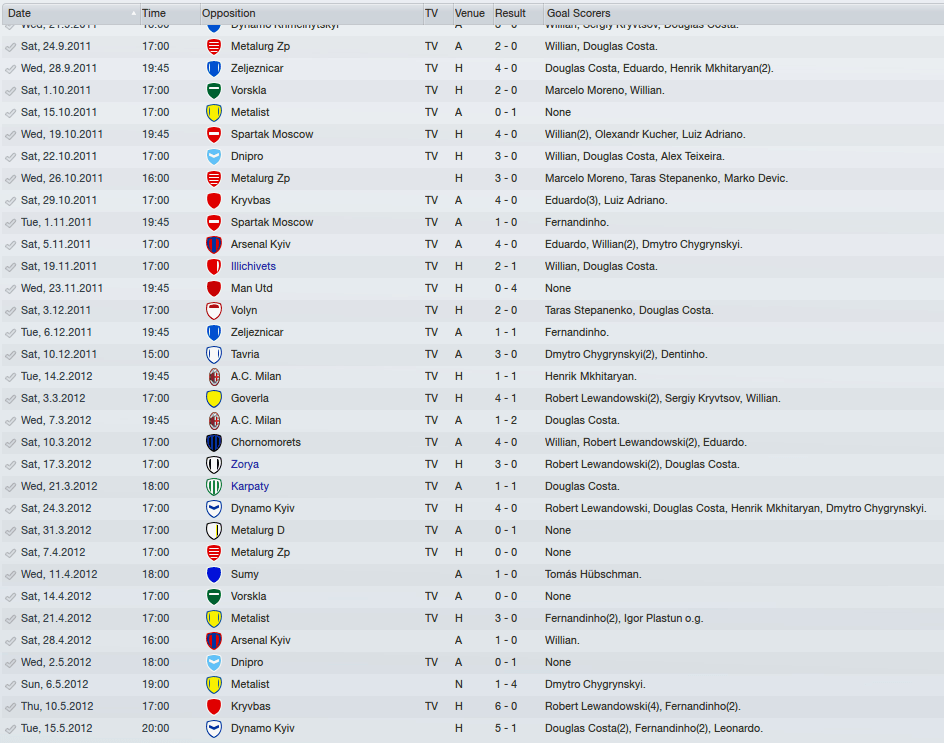 Disappointed in the thrashing by Metalist in the League Cup final, but the 6 - 0 victory over Kryvbas and Lewandowski's 4 goals were pure magic. 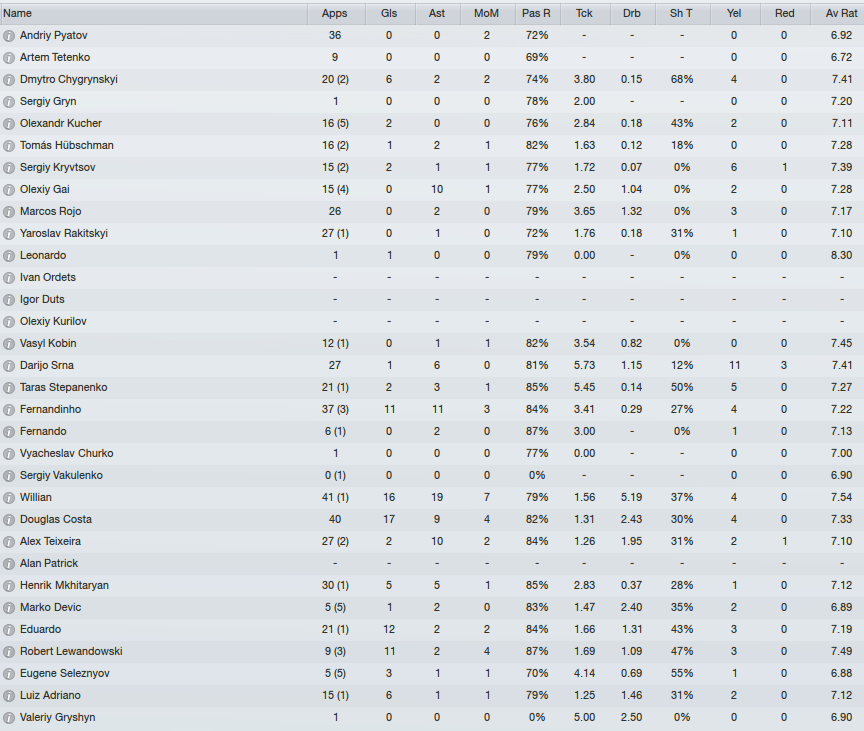 Lewandowski, Costa, Willian, Fernandinho, Eduardo, Srna and Stepanenko were my picks for this season. Pyatov, Luiz Adriano, Rakitskiy and Tetenko were the pure performers this season. 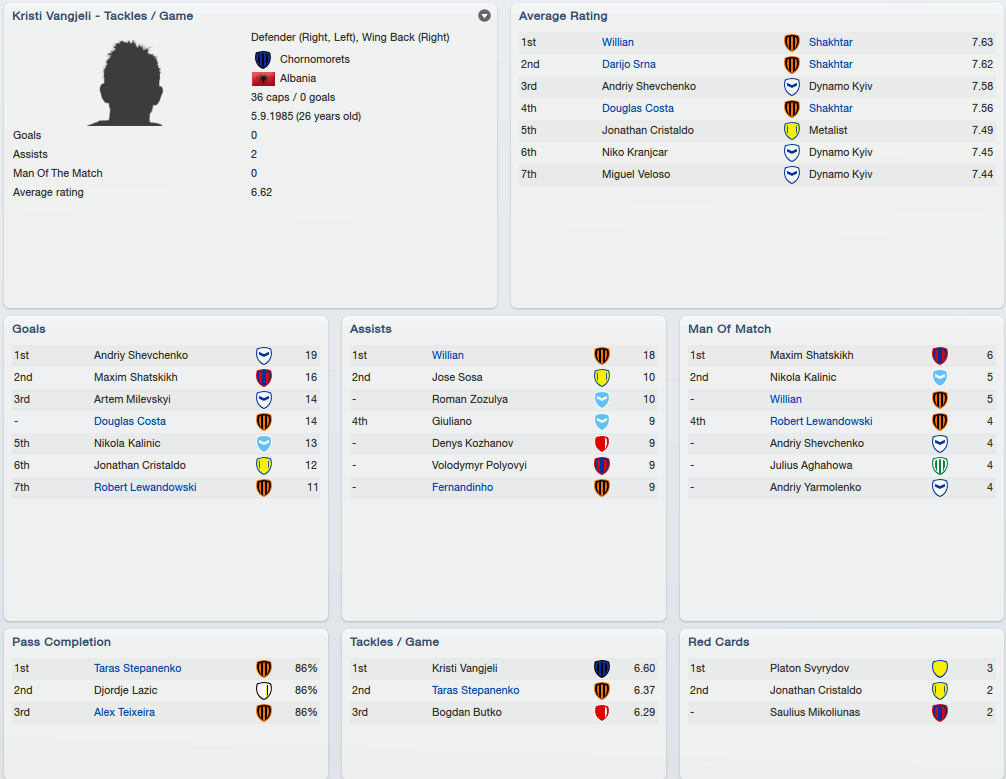 The signing of Robert was a really spontaneous one, wasnt really looking for another striker, but he was going for such a cheap price I just couldnt help myself, and it has payed off really well.

Signed him for £7.5M from Borussia Dortmund, and has become my best Striker.

Once again any and all comments and suggestions are more than welcome.
Login to Quote