I've started a career with Annan Athletic so I can achieve the goal of getting promoted from the lowest league to the highest league so i thought of annan athletic. During my time as manager I will hope to get them to be a SPL mid-table team and perhaps if things go according to plan the club could be taken over by multi-millionaires so the club will have an excellent financial future. i've also requested for a parent club so i can bring players from their reserves to bring in to my 1st team.

I am expecting big things to come.

tmbexe
10 years
Nice challenge to set yourself, good luck man! Never managed that far down in the Scottish division before, but I look forward to seeing how you get on!
Login to Quote

bought in several players which im very happy with as my squad was short of numbers in some areas but will be looking to buy more before the window closes. i'm going to keep all the players that i had to start with and will only sell them if i really need to.

Have my very first game against Airdrie United in the Challenge Cup 1st round. Hope I can surprise them as we have had a good pre-season.
Login to Quote

tmbexe
10 years
8 free's! Can't really go wrong there.. at the end of the day, if they fail, you might be able to see them and make a bit of transfer money!
Login to Quote

Ory1997
10 years
Nothing to comment except your transfers, nice job on getting free players, can you write about their development and performance.
Login to Quote

Atreidas
10 years
Have you tried..:
Jamil Adam
James Cronesberry
Jamil is a great goalscorer with great attributes.
James cronesbery
Same as jamil, But AML, scores a few less then jamil.
They are both young


That is what I'm thinking of doing. I'll give some players that I have signed a chance to see whether they're good enough if I get promoted. If not i'll sell them make some money and bring in flesh blood. i have signed a couple of youngsters so im prepared to give them a couple of seasons to see how well they do cause on some profiles like stephen stirling for example he has the potential to be a quality player for us and hes 21 so hopefully he grows into that potential

patrick1
10 years
PLAYERS I HAVE SIGNED SHOWING ATTRIBUTES AND THEIR POTENTIAL. 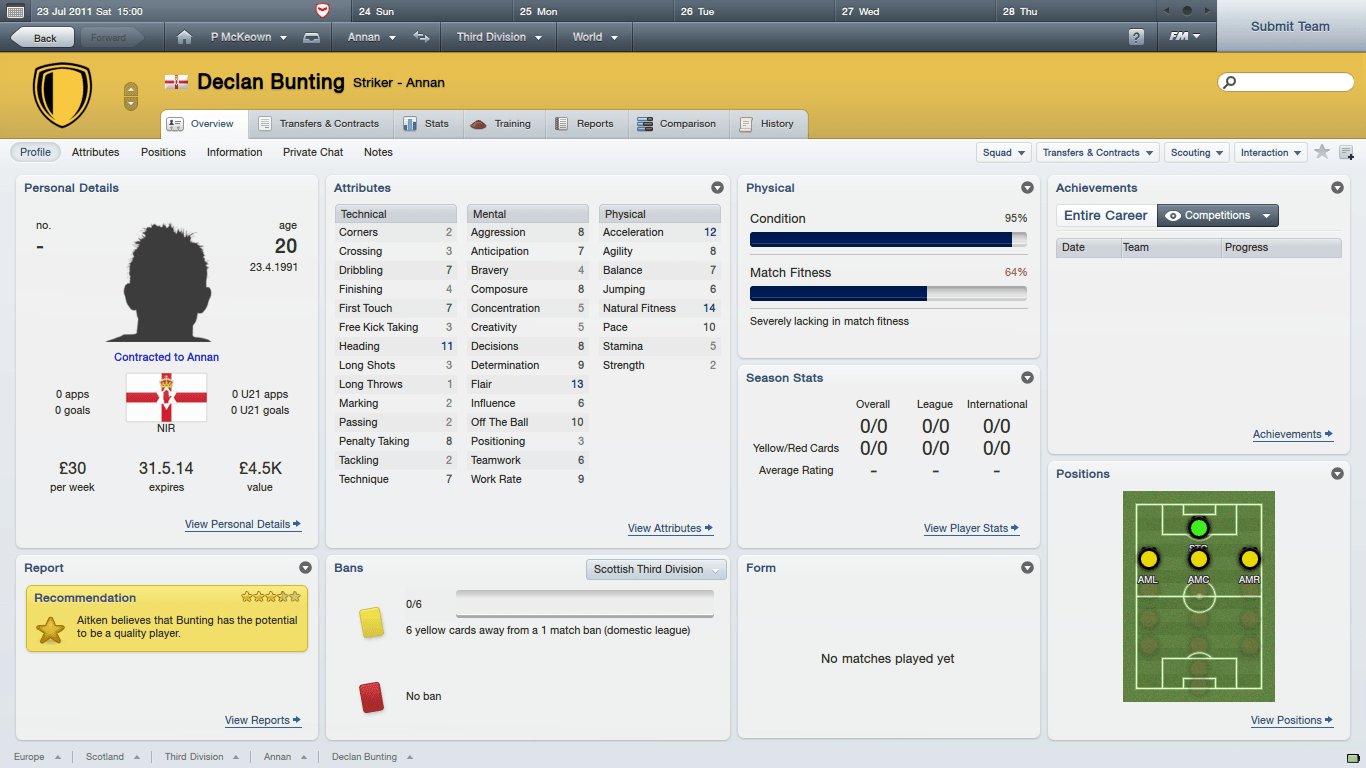 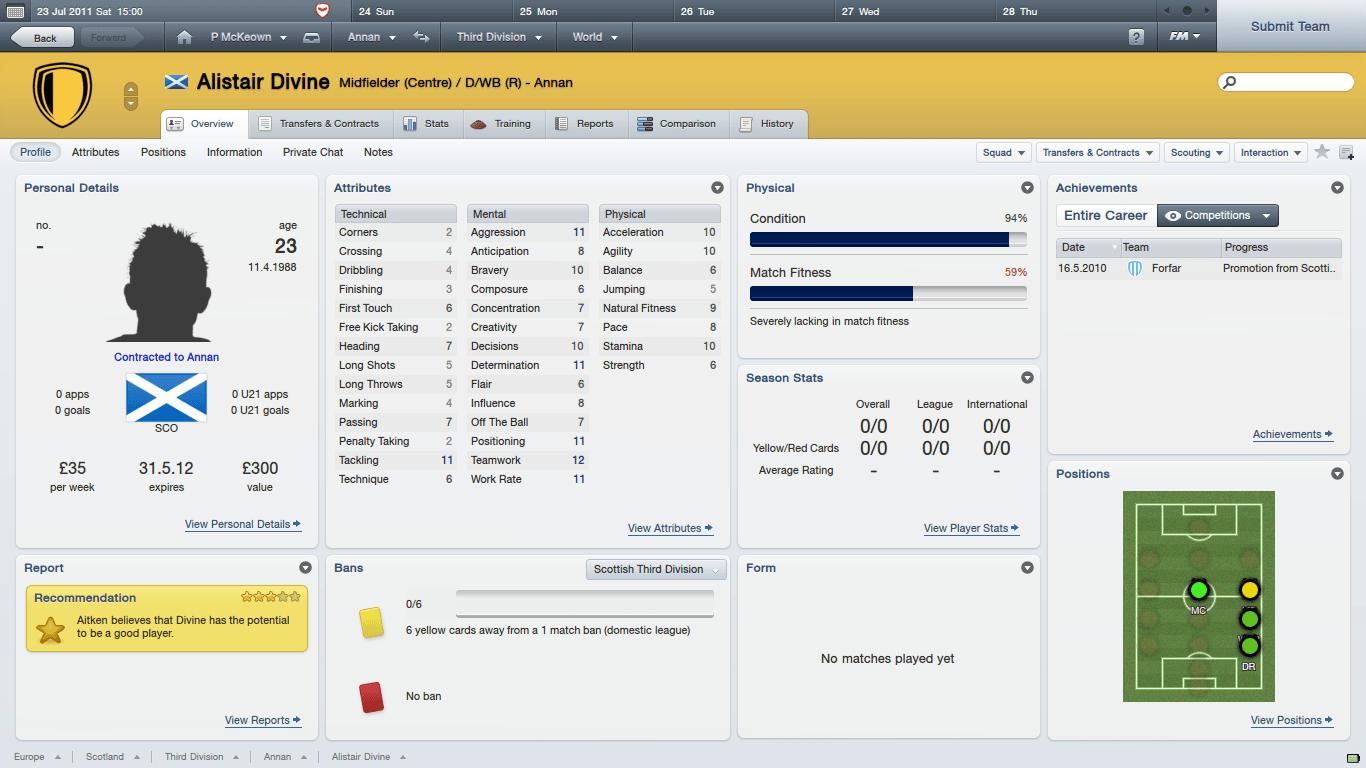 #44453 Atreidas : Have you tried..:
Jamil Adam
James Cronesberry
Jamil is a great goalscorer with great attributes.
James cronesbery
Same as jamil, But AML, scores a few less then jamil.
They are both young

Are they regens? I can't find them on the game and I did use a large database. It said no results found for both of them.
Login to Quote

First game of pre-season against West Auckland and started with a 2-1 win. We were very comfortable with the ball and had some chances to score; we didn't take them in the first half. At h/t subbed the whole team except for the keeper and went 1-0 ahead thanks to kevin neilson. we then threw away the lead 9 minutes from time when they equalised but we didn't panic; we continued to press and thankfully got the winner 2 minutes from time due to our defender fraser paterson (both goalscorers had come off the bench).
Login to Quote

We then played Gretna 2008 and took the lead in the 9th minute thanks to Ian Harty. We were more or less in control of the game and Gretna rarely tested us. Just before half time Ian Harty grabbed his second of the game. As usual I made my changes at half time with a completely different team. In the 60th minute Muirhead was sent off for a professional foul. So I had to reshuffle the team a bit and it nearly didn't pay off as we conceded a penalty with 10 minutes left and the penalty was converted. A minute later David Cox put us 3-1 up then it went 3-2 three minutes later. Sean O'Connor put us 4-2 up then David Cox got his 2nd and our 5th to make sure we won the game comfortably.

So far very happy with performances heading into the new season. My starting 11 is nearly there just tweaking it around and bringing in other players to see how they play.
Login to Quote

Talk about a hammering. We destroyed them in possession, amount of shots we had, passes we completed etc. We started of very well with Cox getting the opener in the 6th minute; 14 minutes later Ian Harty had put us in a comfortable 2-0 lead. We were more relaxed on the ball, gave away possession cheaply at times but worked hard to get it back. Chris Jardine then put us 3-0 up with a cracking free kick and shortly after we were 4-0 with Cox getting his 2nd of the game just heading into half time. In the second half again it was goal crazy with Sarna grabbing a goal and vale of lethien grabbed a consolation goal. Several minutes later 6-0 with Cox getting his hat-trick. We then scored 2 goals in the last 3 minutes, goals coming from Sean O'Connor and Gilifillan.

In the next 2 games we drew against Linlithgow Rose and Bathgate Thistle which I was very disappointed about. It finished 1-1 and 2-2 respectively.
Login to Quote

You are reading "Annan Athletic".