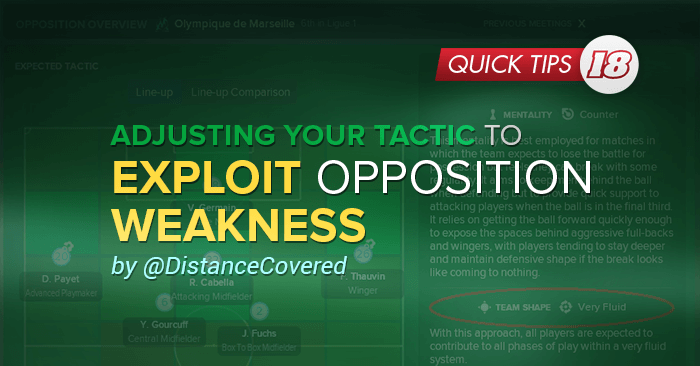 For this guide I’ll be focusing on a Europa League match. We had already qualified as the group winners and this was the final match of the group stage, which means it wasn’t really important so I heavily rotated my side.

Those who follow my blog will know that my squad depth is awful, so most of the players that came in for this tie against Marseille will be sold sooner rather than later.

However, I still wanted to win of course and after studying the opponent I knew how I wanted to attack.


It’s something I do before every match and it makes use of one of the best new features in Football Manager 2018.

Below you’ll see the opposition overview that I saw before facing the opponent in question, Marseille. This overview allows me to understand rough movements that the opposing players will make, as well as how they’ll act as a team both in attack and defense. There’s a wide variety of things I can take from this, but two aspects particularly caught my attention, both of which I’ve circled red.

Firstly, I noticed that Marseille played using Very Fluid, which I don’t often see certainly based on the teams I’ve faced in FM18. This told me that Marseille were going to be very compact, with close and congested spacing between teammates and around the ball, regardless of where my players positioned themselves.

Now with that knowledge, I knew that Marseille would shuffle over as a team to the side of the pitch that the ball was on more so than normal, so my joy would come by quickly attacking the side that Marseille left vacant. Thus, I knew I was going to attack by playing through both or at least one of the wide areas.

So, I then looked at Marseille’s full-backs and Jeremy Mathieu was the clear weak link, as pictured below. He’s being played out of position and his speed is non-existent, which is problematic when paired with Very Fluid, so I decided his flank was the area that I was going to target.

Once I’d determined how I was going to attack, I had to adjust my system accordingly so that the idea would play out in the match engine.

Below, you’ll see the transformation of my setup before and after I’d made the necessary alterations.

As shown in the image, I’ve changed just three things from my usual system and these are:


I should also note that although I played a team full of backup options, I ensured that my right sided attacker was a first team regular, because obviously that player had to be good enough to exploit the targeted weakness.

Now, let’s look at how Diogo Jota impacted the match result, as I’ve captured each significant moment with captions included underneath. For clarity, Jota’s name in the match engine is Silva for some reason & he’s the player wearing the 14 shirt. Minute 5 – Jota gets an assist. Just five minutes after kicking off and as shown above, Jota was able to drift behind Mathieu, run into space with the ball and play a central pass to Bicho who finished from the edge of the box. Minute 34 – Jota gets a hockey assist (the pass before the assist). Notice how isolated Mathieu is here. Jota easily dribbles past him and crosses to Luisinho who knocks it down for Thomas Partey to tap in. Minute 55 – Jota gets another hockey assist. My GK quickly played to Jota and Mathieu didn’t get close to him fast enough, so he had time to switch to Luisinho who played it inside for Moreno to slot.

Overall, Diogo Jota was involved in all three goals that we scored against Marseille, and pictured below you’ll see some stats from his performance that I want to highlight. Firstly, look at his Passes Received, represented by the green arrows. Jota received the most by some distance with 94 passes in comparison Luisinho who received the second most with just 59. Clearly, Jota was utilised as much as I’d wanted.

Next, notice his Dribbles Made. Jota completed 6 dribbles on his own in comparison to the second most with 3. Finally, look at Jota’s Key Passes, as he made 6 which was once again the most on his team with Luisinho the only other player to make more than 1.

Jota ended the match with a rating of 8.6 despite not actually scoring.

I appreciate some people will approach matches differently to this, perhaps with much less emphasis on the opponent, but this is how I like to play the game. Thanks for reading.

Let me know in the comment section down below.