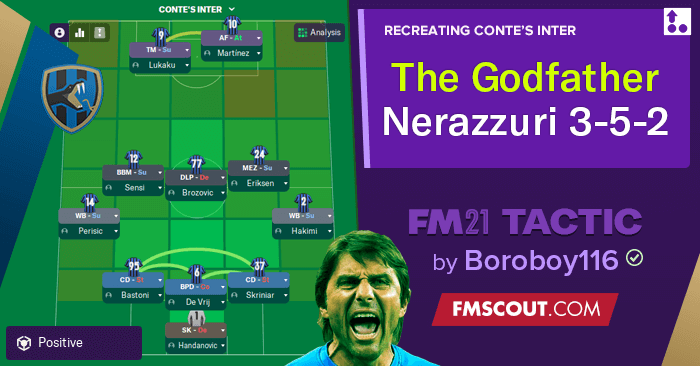 Antonio Conte is often referred to as the 'Godfather' during his managerial career. Conte is highly demanding of his players with his teams being highly efficient and built on unity and hard work. His teams are usually greater than the sum of their parts and any player who doesn't buy into this approach is shown the door.

As a player, Conte spent the bulk of his career playing for Juventus, he was a key part to the success of the club winning 5 Scudettos, a Coppa Italia and the Champions League. He also represented the national team on 20 occasions in a period which saw Italy finish runner up in the 1994 World cup and Euro 2000.

After retiring, Conte went into coaching first being an assistant manager before becoming a manager in his own right. He achieved promotion with Arezzo and Sienna in Seria B the latter earning him his first big role as Juventus came calling in May 2011. He would help rebuild the club back to past glory after their demotion due to the match-fixing scandal. In his first season, he guided the Old Lady to the summit and oversaw a period of domestic dominance which he now seeks to break with Inter.

After winning three Scudettos with Juventus, the Godfather took the national job and led Italy to the semi-finals of Euro 2016. On its conclusion, he moved to England returning to club management with Chelsea. In the early part of the season, Conte used a 4-3-3 system however after 3-0 defeat to Arsenal he reverted back to a shape more familiar to him the 3-4-3 with two holding midfielders. Chelsea then romped to the Premier League title before adding the FA cup a year later.

Inter are one of the powerhouses of Italian football and one of the biggest clubs in Europe, however, since winning the treble in 2010 under Mourinho they have underachieved massively and regressed dramatically. With the appointment of Antonio Conte, last season they enjoyed a renascence pushing Juventus all the way eventually finishing 2nd a point behind the Old Lady. This was their highest finish for almost a decade in which often they weren't even battling for a top 4 finish.

Conte is often referred to as a pragmatic and defensive coach in a similar way to Jose Mourinho this label, however, is false. Conte almost stumbled on to his philosophy of playing three at the back after inheriting Bonucci, Chiellini and Barzagli he quickly realised he couldn't leave one of them out and his direct aggressive style was born.

Conte has always adapted his positional play shapes depending on the players at his disposal. The general principles of play stay the same, but Conte has always been willing to compromise whilst remaining true to his beliefs. Conte as expected used the 3-5-2 system with similar aspects to the innovative 3-4-3 used at Chelsea. Now, however, instead of tricky wingers, he has a front two full of ingenuity in Romelu Lukaku and Lautaro Martinez supplemented by goalscoring midfielders in Stefano Sensi and Nicolo Barella. However, just seeing Inter’s formation as a 3-5-2 would do it an incredible disservice, as it is so much more than that. 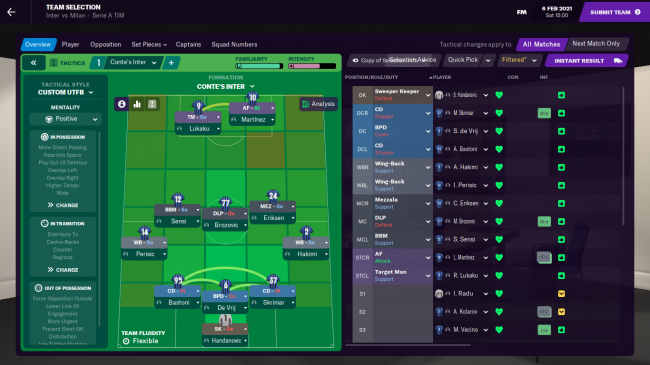 The 3-5-2 formation is very versatile allowing a good manager to get his fullbacks beyond the midfield or have one attacking midfielder with two reserved in a triangle or the fullbacks can invert to be in a line alongside a deeper playmaker, allowing two central midfielders to be more attacking Conte has taken these ideas to the max essentially creating a 3-1-6 in the attack phase. 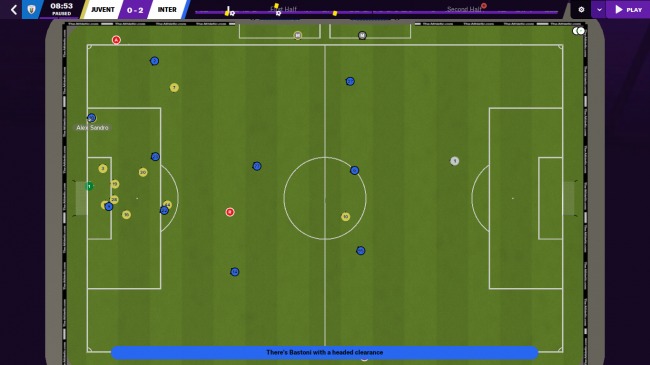 Conte basically overloads the oppositions penalty area, the strikers are expected to occupy the centrebacks whilst the midfield runners run into the box to support the strikers as well as the wingback on the opposite side to the ball. This creates huge problems for the opposition as they have to make a choice between having their midfielders trackback or be completely outnumbered.

Brozovic is crucial whenever he has the ball, his first thought is to either distribute to the outside centre-backs who create space in wide areas and beat the press, or to the wing-backs who often hug the touchline. Sensi and Barellai usually get involved higher up the pitch and they play off the vertical passes forward to a striker normally Lukaku. 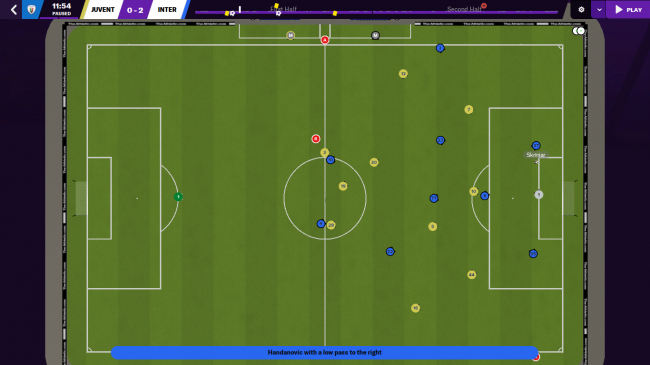 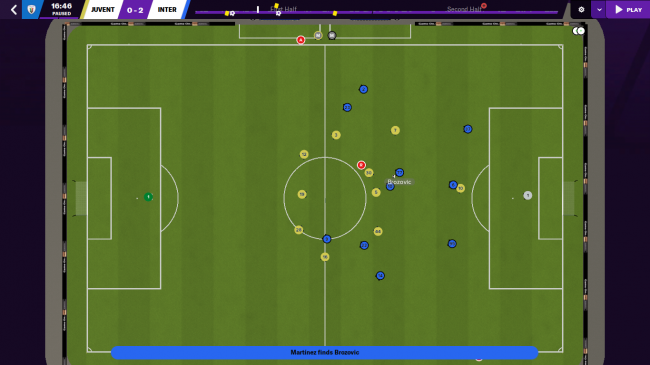 To capture the direct nature of Conte's style I have used direct passing alongside a higher tempo and pass into space as Inter like to play fast counters. The strikers often use counter-movements with one player coming short allowing the partner to run in behind. Inter also overload the wide areas with their strikers moving in the channels as well as their central midfielders supporting their wingbacks. Brozovic is the exception he is the playmaker dictating play from deep using quick switching between short snappy passes and quick switches of play depending on the situation. 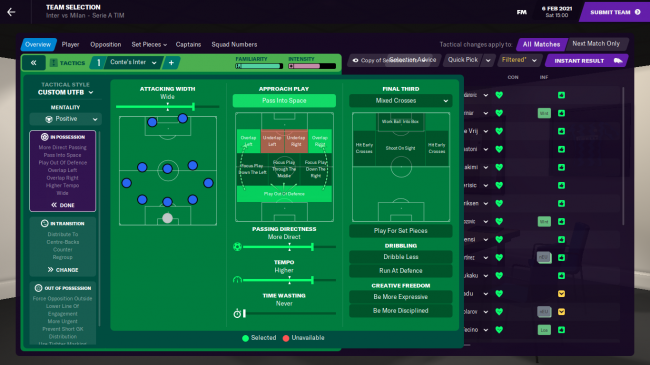 Inter are happy to retreat into their defensive shape of a 5-3-2, this helps them remain solid and also aids their quick countering style by drawing the opponents fullbacks higher up the pitch. They can then launch quick counters into the space left by the opponent's fullbacks. 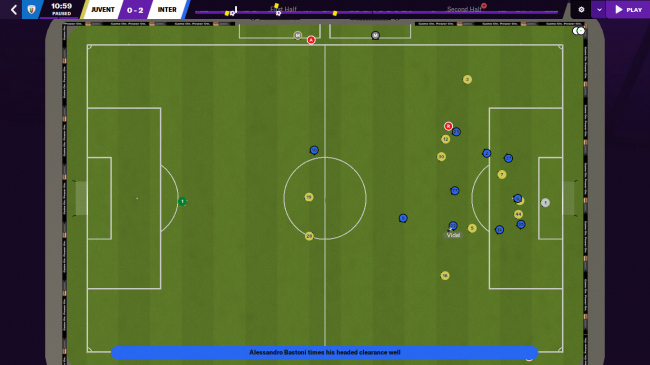 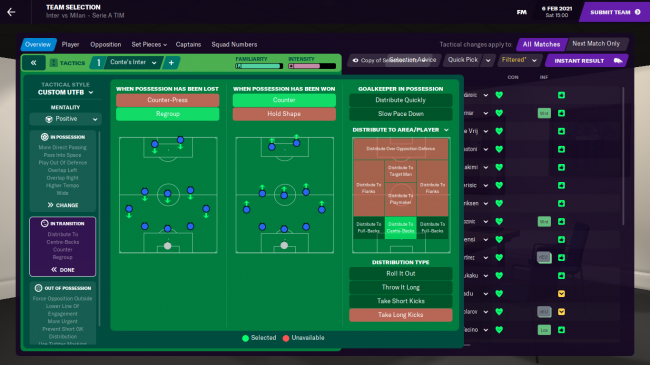 When defending Inter are more than happy to sit on the edge of their area in a 5-3-2 shape to frustrate and nullify their opponents, forcing teams outside before pressing them. In the defensive transition Conte´s philosophy shines through as Inter’s first priority is getting all men back into their defensive shape preventing teams counter attacking them. 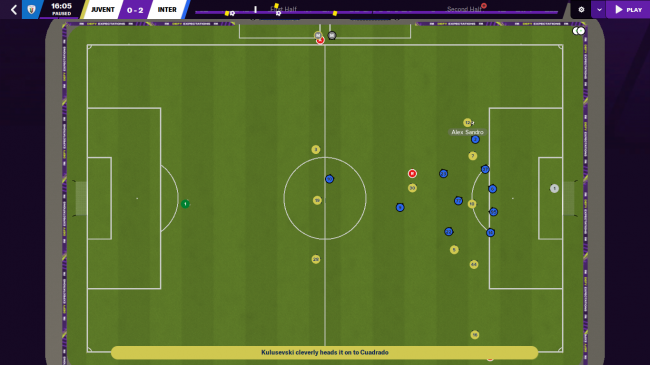 In the image above you can see the compact defensive shape with five defenders and three midfielders close together. Also, the forwards are working defensively to help the team regain possession by reducing space for the opponents.

Mostly. Inter look to press man for man higher up the pitch aiming to force the opposition into wide areas by allowing the opposition full-backs some space and leaving them as the easiest options for a pass. This allows Inter to clog the centre of the pitch, making them hard to play through, and also means when they do engage the press out wide, there is often space behind the opposition wing-backs into which they can attack. 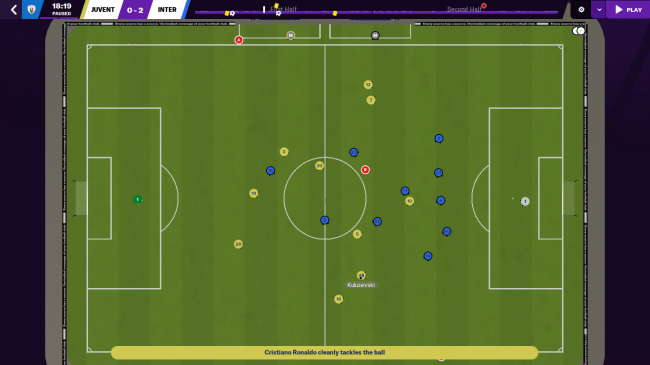 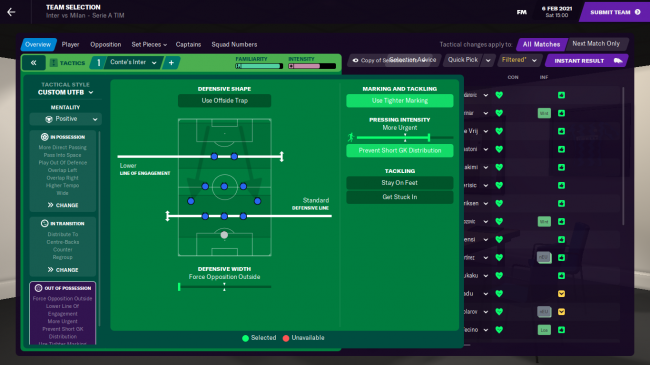 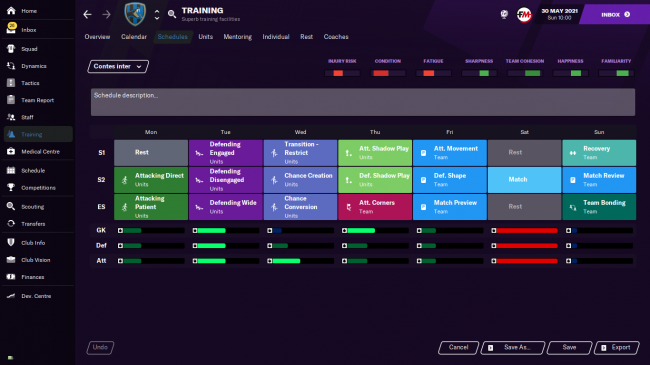 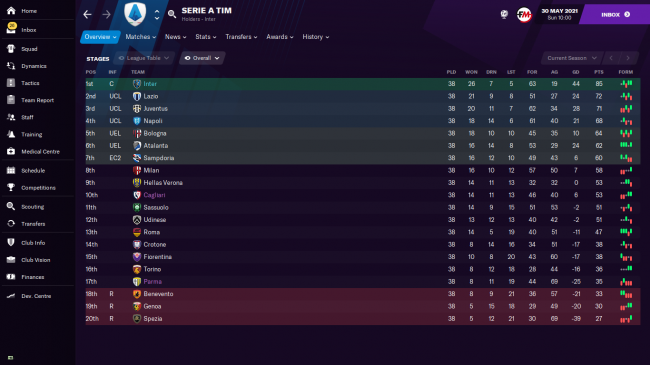 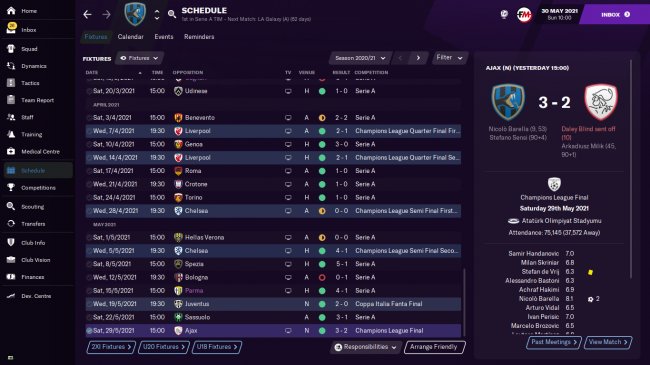 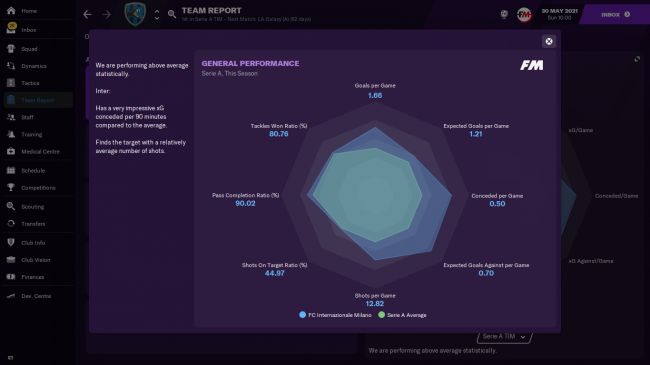 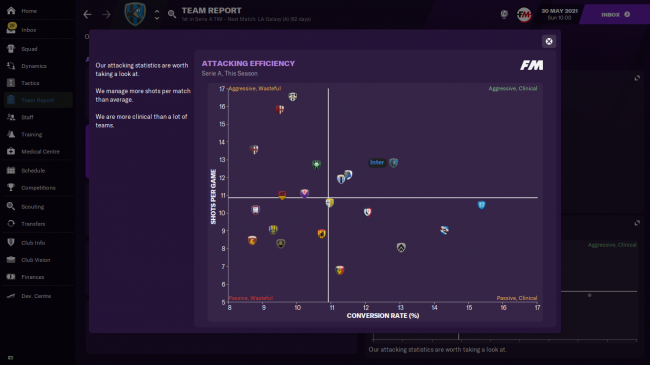 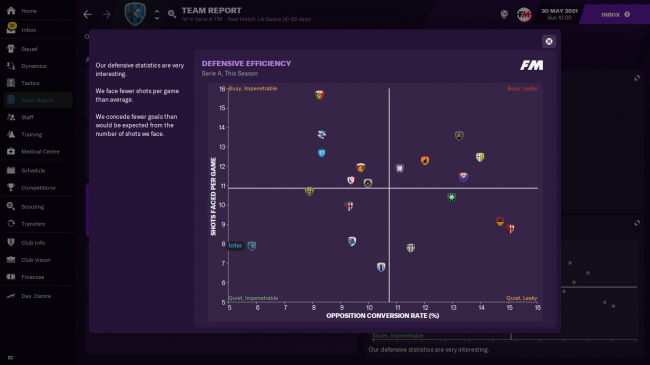