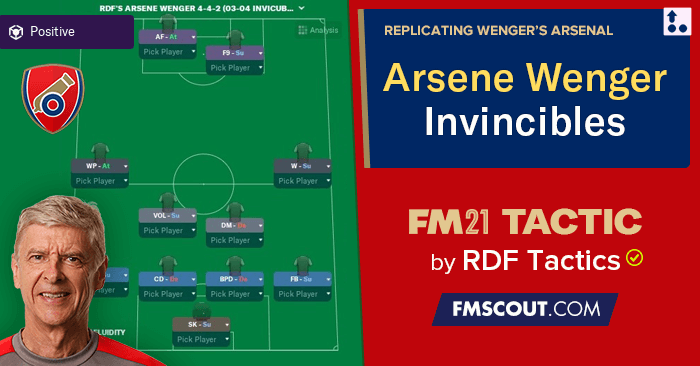 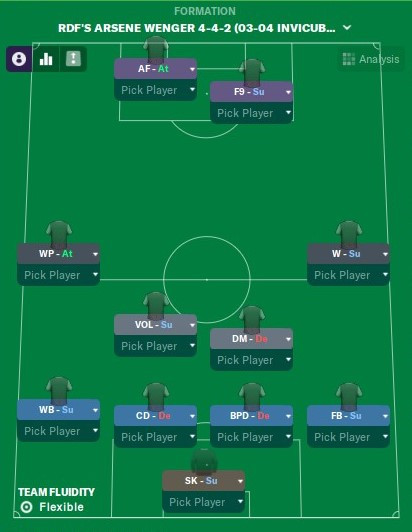 Many viewed this Arsenal side as a counter-attacking team as they displayed quick attacking transitions. From defensive situations, Arsenal could create or score within just a few passes. Down to the players' staggered positioning, they were able to break down sides as players operated in lines and spaces difficult for opponents to defend.

Playing Out From The Back: When building from the back, Kolo Toure was very comfortable on the ball and therefore, he could either play an advanced vertical pass or bring the ball out in search of a better passing angle. Gilberto Silva was also relied upon to make quick vertical passes to get the ball forward to the key creative players, the wingers, strikers, or Patrick Vieira. Many times when Arsenal were building up, they could outnumber the opponents in midfield. With Bergkamp coming deeper, meant now Arsenal could have 3 in midfield instead of the two and this could create a 3v2 situation. If Pires was also in central areas, this could be a 4v2 situation.

Going Forward: Arsenal were effective attacking centrally with Vieira making forward runs supporting the attackers, Bergkamp dropping deeper, but Arsenal were just as dangerous on the flanks, especially on the left. Robert Pires and Henry played close to each other, Henry liked to drift to the left whilst Pires liked to come inside and this meant Ashley Cole could afford to get up the flank with some freedom. When Cole did get further forward, this helps create an overload with either Henry or Pires to make a 2v1 situation on the left against the opposition full-back, and then either Henry or Pires could move into the channel.

Ljungberg was an effective dribbler. When he had his chance, he could get past his defender in a 1v1 battle so Lauren didn't do much overlapping but did when the chance was there.

When the ball was with the opponent's backline, the two forwards (Henry & Bergkamp) would engage in a press to try and force the play out wide. If the ball made its way centrally, then Bergkamp would drop off to add another body in midfield but Henry would remain forward, and Arsenal

With the back-line being quick, certainly quicker than most forwards, they could step up and play an offside trap. But with the midfield not engaging too high up and with the backline stepping up, this meant Arsenal were compact and had a mid-block that was very difficult to play through as opponents couldn't have space or time in midfield. And if the ball did make its way over or passed the defence line then Arsenal had Jens Lehmann, the Sweeper-Keeper to sweep things up.

Gilberto Silva had the job to protect the defence and sat in front of it whilst Vieira could win the ball to set up a counter-attack where he would have forward runners to pass too or he could be one getting forward to support the attack. The two wingers had their defensive responsibilities whilst also getting forward once the ball has been won