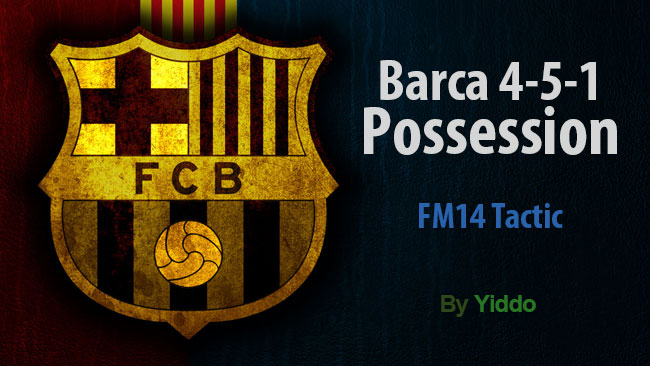 This is my first time sharing a tactic so I apologize in advance if I miss anything or am not specific enough for you.

I know there are lots of Barca tactics out there and its relatively easy to use Barca but what makes mine a little different is consistency. A lot of tactics I have used have seen me be very inconsistent especially away from home.

What should we expect to see from this tactic?

In order for this tactic to become fluid you will need to put General Training to Tactics and put this Very high throughout pre season. You will also need to put Match Training as tactics only and scheduling to 50% more match training.

Pretty much was it says on the tin. This is for possession based football, if you want Tika Taka then I suggest changing the tempo to higher (this may result in you conceding more chances). With this tactic you do still play attractive football but this is a slower more cautious approach.

As you can see it is a pretty solid start to the season. The 2 draws were a result of not taking chances as I dominated both games from start to finish. The defensive record was very good before the last 2 games but due to tiredness we have conceded a couple of goals later in the game but most goals against are either screamers or individual player mistakes.

Most of the negative results were down to poor finishing after dominating the game. The Milan away was a deserved loss as we did not turn up (which happens from time to time)

As you can see it really was a smash and grab result. One of the down falls of only having 1 striker is lack of shots on target but if you have the right inside forwards they should chip in aswell.

This was the first game of the season

Milan scored in the 90th minute with a clearance that fell kindly to their striker.

This game was a bit more even in terms of possession but Madrid are a very good side and also play the possession so sometimes you may not get 60% of the ball.

Last game before the Christmas break. 2 late Mascherano mistakes cost us a 4-0 win.

What you have to remember is not every game is going to be pure domination and be prepared to be tested by counter attacking sides as with a high pressing possession game you will always be open for a quick attack.

The attacking corner tactic is very basic but I score almost a corner a game and with a small side that's pretty impressive. The defending corners is very basic so you might want to do your own.

I have not tested this formation with any other team so I'm not 100% sure if this tactic will work with lower rated teams but should be fine with the likes of Bayern, City, Arsenal etc.

It is all about the players you are using, if you are using players that are not composed or do not have good passing stats then you will struggle with this tactic.

Remember to give this formation time and get it fluid before writing it off.