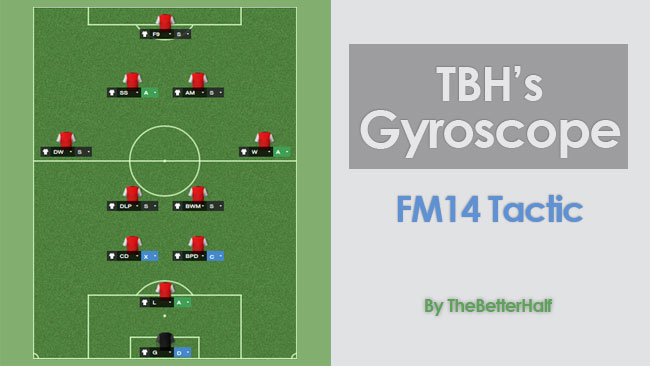 Here is a tactic that focuses the play using triangles. The key is to outnumber and overload every single area the ball is in when in possession. The strategy is a counter one but don't be fooled by it. If you have players with good decision making, then you will be surprised about the amount of possession you are able to hold, especially if you are a top team, with the opponents sitting deep and not closing you down.

As we play within an approach that by default uses a deeper d-line, a lowish press and using less width, we implement these instructions to make the team more aggressive. We also try to keep possession when the counter attack is not on, still trying to encourage more risky passes.

The Defence
We use a Ball Playing DC, one Central Defender and one Libero on attack. If you don’t have a Libero, then either retrain your most complete DC or DMC.
Now, if you face teams attacking down the flanks using AMR/Ls, pushed up MR/Ls or FCs drifting wide, the use both DCs as STOPPERS. If only one flank is acting like above, use a stopper on the flank. If they wingers staying behind more, then use the COVER duty.

The DMCs
Here, we sit with one Deep Playmaker on a support duty. He is set up to close down further up the pitch. His partner is a BallWinner on support that gets forward more often and keep a shorter passing game can connect better with the players around him, actually letting the Playmaker hit those through balls. This way, he can concentrate on getting forward and provide movement instead of getting isolated from the match after having played a more direct ball from deep.

The Wingers
Out on the left flank, we have a defensive winger on support and one the right, a winger on Attack with no personal instructions.

The Right AMC
Here, we sit with an AMC on support that have been given the orders to roam and find free space. Within this, he is told to act like a mobile linkman by reducing his risky passes, letting him hold up the ball, move with it and keep a shorter passing game, all this to allow his teammates to get into good positions.

The FC and left AMC partnership
Against teams sitting deep and you need to create space, I find it better to use a Supporting FC (False nine, Complete FC) along with a Shadow Striker as left AMC. Against teams pushing up and you have space to actually exploit, an Advanced FC or Poacher is a better choice (both by roles and player type). A real life example - a player like Negredo (here, representing the Advanced FC choice) at Man City is a better choice against teams pushing up as he is more mobile and gets inside the box, whilst Dzeko (representing the support choice) fills a role against teams where the space is found in the hole and out wide rather than behind their line of defence.

1. Put the downloaded file into this folder: Documents > Sports Interactive > Football Manager 2014 > tactics
(if there is no tactics folder, create one).
2. Start your game and go to your team’s tactics screen.
3. Click on the little arrow located to the right of your starting tactic name, move your mouse cursor over “archived tactics” and select it from the menu.