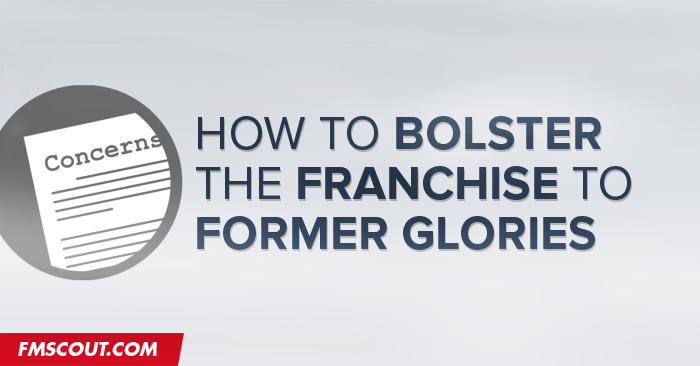 With more and more information being revealed about the upcoming release of the newest installment to the Football Manager franchise, hitting the stores across the globe on 10th November 2017, I believe that it is time for somebody to bring FM's rapidly declining fanbase which have taken its toll on sales of the game from a sky-high 1,600,000 sales figure for FM12 down to a 1,175,000 sales figure for the most recent installment of FM17. So in this piece I will try and answer why Football Manager is failing year on year.

Football Manager 2009 was my first ever purchase of the game, with exciting new features being brandished across the copy of the game, such as the 3D Match Engine, which was a revolutionary step forward in modernising the franchise from the previous 2D display and gave the game a whole new face, which drew in hundreds of thousands of new customers as 1.15million people globally went out to purchase the new installment. Many saw the move to a 3D match engine as a further step towards challenging FIFA's beloved Career Mode. The announcement that the game would be available on the Steam content delivery system made the game much easier to purchase and update, making FM09 the most accessible installment of its time.

But since this major step forward, no major changes or fixes have occurred, the 3D Match Engine remains the same low quality, outdated system that was introduced in 2008 - meaning some users have even reverted to simply viewing the match in 2D the quality is so poor. This begs the question: Why have Sports Interactive slowed down on releasing groundbreaking features? Features that have arguably been lacking since FM13's introduction of the Classic Mode of gameplay? My personal viewpoint on this is the lack of competition. Up until Football Manager 2014, Sports Interactive were competing with Electronic Arts' FIFA Manager series, until the series stopped production after the 2014 edition. Since then, Sports Interactive have had no meaningful competition to push the series to keep getting ahead with new groundbreaking improvements like the features we saw pre-FM14, so is it a lack of ideas on part of SI or is it a lack of challenge that allows them to be lazy yet still pick up over one million sales per year from the leftover fans of FIFA Manager.

My next point is that with the lack of impacting features, Sports Interactive have tried to compensate for this by bundling thousands of meaningless new features. This is all well and good until you realise that the game has become much more about finding out how to play the game as opposed to enjoying the game for what it is. Sure, this is good for the die-hard FM'ers who want a bigger challenge after winning ten back-to-back Champions League trophies with Truro City, but many basic players who just want an easy ride in the game feel isolated by such overwhelming detail being poured into the game year in, year out. Many are left confused by the tactics system and resort to downloading tactics, resulting in a loss of feeling like the results they get is down to their hard work. It also applies to the training system, with many players just not having the time or effort to construct a working training regime which ends up with unfit players or just delegating this feature to the assistant manager, which isn't usually the case with managers in real life at any level of football. The increase in difficulty could easily be resolved by a FIFA-style difficulty tiering system i.e. beginner, professional, legendary.

I also feel like Sports Interactive are missing a trick by not releasing a less-enhanced version of the game onto the big consoles such as XBOX One, PlayStation 4 and so on, just like they have done with Football Manager Handheld on iOS and PSP's. PC gaming is slowly becoming a thing of the past - particularly with sports games - as the main consoles take precedence over PC today, as sales show for games such as FIFA and PES. A console version of Football Manager would revolutionise how the sports gaming community would see the Football Manager franchise. However, an impeccable match engine is required for such a development to occur.

I do feel like a lot of FM fans do get ignored when they express what they would like to see in the game, in the same way that FIFA Career Mode lovers always feel isolated by the money-making machine that is Ultimate Team. Just reading some of the requests on FM Scout's Football Manager 18 Discussion forum I notice that many want improvements to the match engine and multiplayer as well as a few calling for a stadium editor like what FIFA Manager players had in that particular game. None of these requests have appeared to be put into action apart from a few minor tweaks to the match engine as there always is, but nothing that gets it looking any better than any of the previous versions.

In conclusion, I definitely feel as though Sports Interactive need to step up there improvements year on year just as EA have begun to lend their ear to more Career Mode and Pro Clubs fans in order to step up all of the features in their game. Until FM has a considerable competitor, though, I feel like we will be waiting a long time for such upgrades in how the game is played and viewed.

What are your thoughts? Leave them down below!

Discussion: What does Football Manager need to survive in the future?