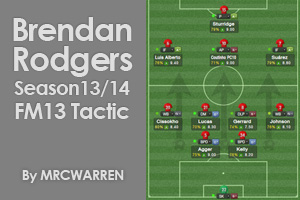 Tactic Overview
The main philosophy is playing possession based football and controlling games. The team must have good passing pedigree to retain possession and pass their way into the game. Short passing, a lot of creative freedom and high pressing are the key features of a Brendan Rodger's team. Young talented fast attackers, Good midfield ball distribution and careful build up play from the defense!

My line up is as follows;


1. Goalkeeper; I use Mignolet and he is doing fine. Should obviously be trained as a Sweeper Keeper to build up his attributes for the role.

2. Central Defenders; I use Agger and Skrtel in these positions and use the Ball Playing Defender Role and the Defend Duty

3. Wing Backs; I use Enrique on the left and Johnson on the right, both in the Wing Back Role with Automatic Duty so that they drop back automatically to form the 4-2-3-1 when needed (hence why the tactic is a false 4-2-3-1)

5. Inside Forwards; Both of the wide positions are based on the Inside Forward role set to Attack Duty, in these positions I play with Moses on the right and Suarez on the left, alternating with Luis Alberto and Raheem Sterling as backup/substitutes. Quite a few goals come from these positions with the player cutting inside.

6. Advance Playmaker; Naturally I have the wizard in this position which is of course Coutinho, he will be responsible for feeding the Poacher up front and passing like a boss. This position is Advanced Playmaker with Support Duty

7. Striker; In this position I play Daniel Sturridge who fits the bill perfectly with his Pace, Dribbling and Speed! He is of course set to Attack Duty


The Tactic is fully set up and can be tweaked to anything you feel is wrong/not right for your team. I haven't ever submitted a Tactic before, this is my first so sorry if my description is a it amateur sounding.