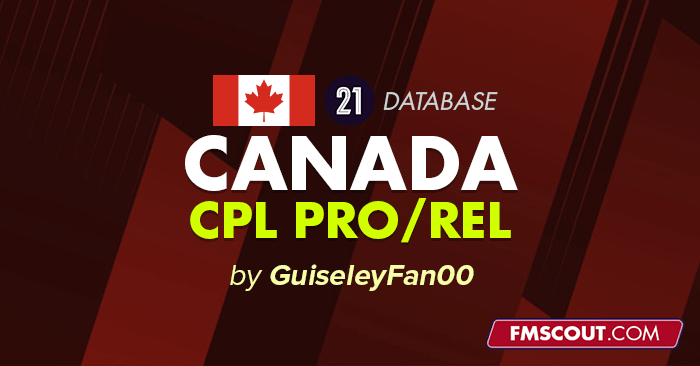 Hey All... Working on a Canadian Database... With all of the editors out there, this database is a bit different then all.. Before I go into details on the database. Myself and JimmyBronx have made this file from scratch. The following is how the Two Database will beak down.

Season runs from March to August

Top 2 teams play for the Championship

11th team plays in the relegation playoff (Team from Division 2)

Season runs from March to November

Top team gets Promoted to CPL

2nd and 3rd team playoff (Winner plays the 11th place from CPL with the winner staying in CPL, loser gets relegated to CEL)

Each League Above will come with a U21 Reserve League to develop their youth intake.

All Teams from Above Leagues will Compete in the Canadian Championship

If you want to play as a U-Sports School (aka Canada NCAA for those who are from US or outside of North America start in Season 2. Reason for that is because if you start season 1 with all of the players it has to create within the databses if you have playable players selected it will not create enough regens)

MLS Academy League - 26 Teams x 2 Games vs each team. Each team plays 50 games
MLS Academy Cup - Involves all 26 Teams some teams join in the 1st round and some join 2nd round. It has 1st round and 2nd round before you hit the Quarter, Semis and Finals. Cup runs during the Month of January