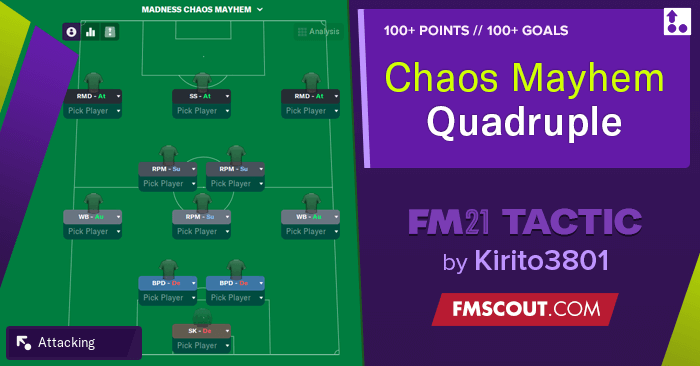 Some time ago, back in FM 2017, I decided for myself that I would like to try new roles in the first saves, which are added to the game. And then I became convinced that it worked, and very well - a direct promotion from the Regional Conference to League 2 in two seasons with almost no transfers. But at the same time, I also noticed that in the next part the good tactics from the previous one no longer work (omit 4-3-3, it is eternal).

For fun, I decided to try one of the old tactics that had worked for me before - and it just ripped the Premier League to shreds. Something close is working now for Nagelsmann and Tuchel, but the level of chaos in this tactic is off the charts.

How do you like 3 roaming playmakers, one of whom is a defensive midfielder, and even in the company of two raumdeuter? Someone might say it doesn't work, I’ll say it won the Premier League by 10 points, the best attack in the league (103 goals), the best defense in the league (25 conceded goals), won the Champions League, won the FA Cup and a (very disappointing) defeat in the Carabao Cup final, with the Community Shield for starters.

Yes, it's imbalanced Liverpool again, but who cares? I'm currently experimenting with identifying the best FM tactics from the presets - and I can say that even Liverpool needs tactics. With a bad formation, he took eighth place with me, and flew out of the Champions League group (and not from third place to the Europa League, but from fourth and permanently). So it's not that imbalanced either. 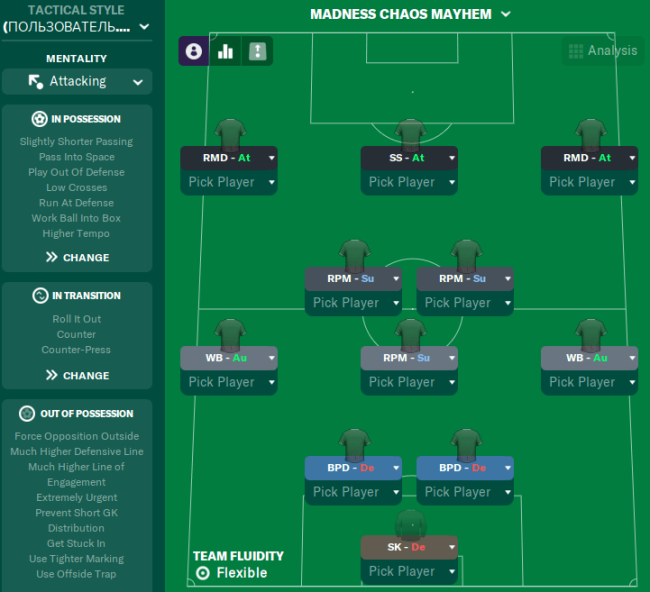 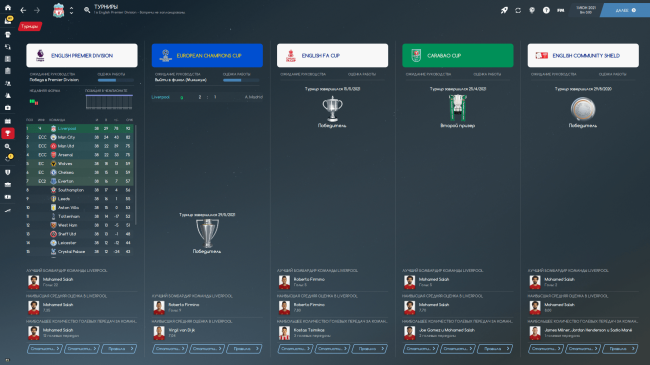 What's interesting here:
1) kicked Southampton forward in the first league home game with a score of 5-0
2) big hello to Thomas Tuchel at home - 5-0
3) humiliation of Mourinho, also at home, the same 5-0
4) two series of West Ham bullying, again at home, separated by two days - two wins 6-1 (total score 12-2) in the fourth round of the FA Cup and in the Premier League. Shaqiri and Mane were particularly cynical - 4 goals from each.
5) a slight hint of the final place of Arsenal in the home match of the Premier League - 4-0 (and in fact, in this save, he really is in fourth place, lol)
6) Aston Villa 4-4 Cheerful Away Shootout
7) The Special One got some surprise even away from Anfield - 0-4
8) Pep Guardiola also embarrassed himself at Anfield, getting our signature 5-0
9) Salah and Mane staged hell for our rivals - 34 + 20 for the first, 31 + 11 for the second
10) So that you understand - once even a certain Melkamu Frauendorf entered the field and managed to make 1 + 1 (true, against Peterborough in the Carabao Cup, but who cares again? He plays about this level by his abilities)

PS: You need to somehow nerf Solskjaer - he constantly creates problems in the Premier League for everyone who plays according to non-classical tactics. In 5 games against him, I have 2 wins, a draw and two defeats, one of which prevented me from taking all the possible titles of this season.