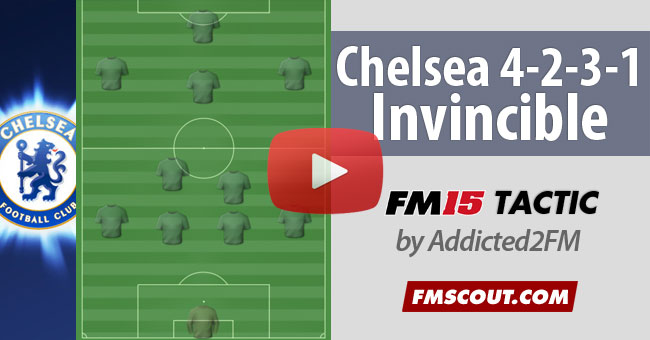 When creating this tactic I was curious as to whether it would be effective as there is a large gap between the midfield and attacking midfield but I surprised myself with some of the amazing seasons I've had with this tactic [results are at the bottom before the video]. This tactic is quite similar to Chelsea's real life tactics but it has a few differences such as the Deep Lying Playmaker would be more of an Anchor man or Half back if this was emulating Chelsea's real life style. 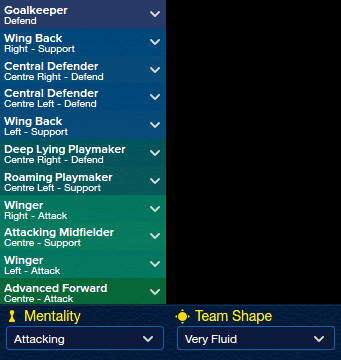 We'll run down the positions first then the mentality and instructions:

Goalkeeper (G/Defend): his job is simple, stop goals going in if the lines in front of him fail to do so but this tactic has a defensive set-up and doesn't often concede that many goals over the course of a season but your keeper can prove to be vital in some big games.

Right/Left Back (WB/Support): due to this tactic having attacking wingers I felt that we would just keep the wing backs on support so they don't attack too high up and leave space which the attacking wingers are not going to come back and cover them. We do look for the overlap sometimes though as instructed.

Centre Backs (CD/Defend): their job is simple and similar to the keepers, if they lines in front fail to keep the oppositions players out these will be called upon to try and do a job before the ball comes to the keeper and again can prove to be a crucial part of your team in bigger games.

Defensive Midfielder (DLP/Defend): his role is to take time on the ball and look for options to get the ball up to the lines further forward whether it be by a long ball or a setting up a passing move with a short pass.

Defensive Midfielder (RPM/Support): he is different to the DLP as he will usually be the person who will set up the passing moves if the DLP cannot find anything else to do with the ball and as in the name of a RPM (Roaming Playmaker) he will roam if he needs to and kick start a move from the deeper positions.

The defensive midfielders often get assists along with the wingers

Left and Right Winger (W/Attack): these guys are the main source of assists as they are the ones that are usually receiving the ball from the defensive midfielders and then crossing it or passing it into the striker who scores most of the goals, but these guys also score a fair amount by cutting in and also in passing moves with the striker.

Attacking Midfielder (AM/Support):: firstly the reason I have put this played on support is because of the gap between the defensive midfielders and attacking midfielders so the attacking midfielder will sometimes be seen in deeper positions to make the gap a little smaller. This player tends to score and set up a lot of goals in the team.

Striker (AF/Attack): not much to say on the striker, obviously the main source of goals as he is getting fed the ball by the wingers and the attacking midfielder.

The mentality of this tactic is attacking (as are most my tactics) - this is because its just my personal preference as I like to play an attacking style of football on football manager. The team shape is very fluid meaning that all the players are expected to contribute to all phases of play - this means that attackers will be expected to help defend and vice versa. 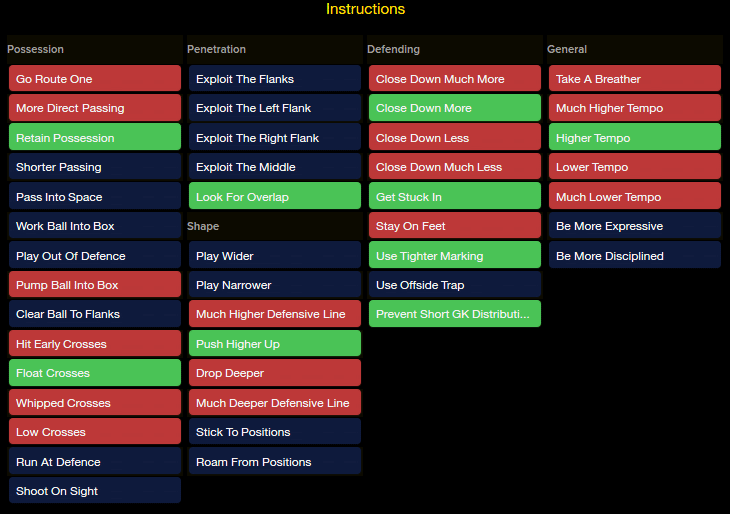 Our instructions are: Retain Possession, Float Crosses (depends on how tall your striker is), Looks for overlap, Push Higher Up, Close Down More, Get Stuck In, Use Tighter Marking, Prevent Short GK Distribution and Higher Tempo.

The reason for the the float crosses was because I had a massive 2 meter tall target man at one point but unfortunately he has retired now but that instruction is still effective with my 1.75 metre tall striker I now have. The rest are just my style of play which is basically based on the Barcelona tiki-taka style of play by passing the ball around and when we lose it pressing our opponent and maybe causing them to make a mistake.

The Results of this FM15 tactic


As previously mentioned this tactic is a strange one that at first I was curios about using due to the massive gap between the midfielders and the attacking players but I have proven myself wrong after first using this tactic in 2028/29 season which we won the title by 6 points only losing 3 and conceding 19 goals over the course of the league season and also winning the Capital One Cup after beating Manchester United in the final with our first season with this tactic. Something else I need to point out is this tactic was also a drastic change from our last one where we played a 4-3-3 but with 3 strikers.

In our next season we did an invincible season after winning 31 and drawing 7 and again conceding a low amount of only 14 goals and netting 110 goals therefore having a goal difference of 96 and a points total of 100 (a new record). This was also the first time in this save that I had done the invincibles with my amazing team (full of regens) in the 15 years in the save (at the time). Unfortunately due to our focus on finishing the league season unbeaten we only managed to win the Premier League but we did reach the Champions League semi-finals.

Our next season we scraped the title by managing to win it by 1 point ahead of Manchester United but we only lost 3 over the course of the season and we again scored over 100, netting 103 goals. This year we also won the Capital One Cup after defeating Arsenal in the semis and Middlesborough 5-0 in the final. We also manged to step up our game in the Champions League as we we're no longer playing for an invincible campaign and we beat the following teams en route to the final: PSG (3-2 agg), Monaco (6-1 agg) and Barcelona (6-2 agg) all very good teams there but we also had a tough team in the final in Real Madrid but we managed to beat them 2-0 in normal time.

We broke even more records in the following season after managed to win 32 games in the league season (better than our invincibles) but we did lose 4 games but still accumulated 98 points finishing 17 clear of 2nd placed Everton. Alongside retaining the league title we also won the Capital One Cup after beating Manchester United in the semis and Sunderland in the final and the FA Cup after beating Everton in the semis and Arsenal in the final.

Do we ever stop breaking records? No - in the 2032/33 season we again broke our new record of points this time getting 103 after again breaking the games won record getting 33 won, 4 draws and only 1 loss in the league season. We also got 119 goals which is also a club record and finished 18 points clear of 2nd placed Everton. We also managed to retain the FA Cup beating Arsenal in the final but that was the only trophy we won but it was still The Double!

2033/34 was not the greatest league season for us only finishing 3 clear of Everton but we still picked up a points total of 90 and most importantly retained the league again. But to make up for the league season we won the Capital One Cup after beating Hull in the final and the Champions League after beating teams like: Dortmund, PSG (4-1 agg), Bayern (4-2 agg) and Liverpool (3-1 agg) before beating Real Madrid 2-1 in the final to win another Champions League.

In my most recent full season we also retained the league again after being 6 points clear of Everton after scoring 103 goals and only conceding 33 over the course of the league season. We were also runners up in the FA Cup but we lost on penalties against Everton. We were also runners up in the Capital One Cup but Manchester United managed to beat us 1-0 in extra time. We did however retain the Champions League after beating Manchester United in the semis (7-3 agg) and Porto in the final 1-0 after extra time.

In my current league season we have played 7 games in the league and yet to lose in any competitions as we sit 3 points clear at the top of the league after only drawing 1 so far. We have so far scored 17 and only let in 5.


I also made a video on YouTube about this tactic but this is a lot more in-depth and since the video a few seasons have passed: