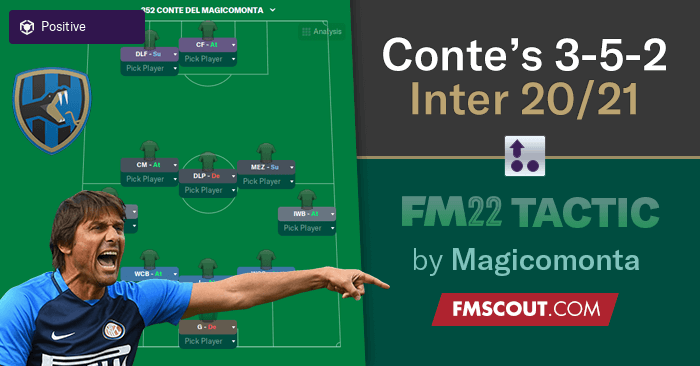 the right fielder #hakimi is a reversed winger on attack because he will often have to enter the inside swapping positions with the midfielder but he won't disdain crosses from the baseline too.

the other is #perisic, a complete winger always on attack who will stay wide and will look more for the back of the field.

the two midfielders are a #barella midfielder who will expand a lot, often exchanging positions with the right-back, while the other is an attacking midfielder, #vidal. which will look for the insertions in the spaces created by the second tip exiting the attack line.

the two attackers are moved slightly to the right because #lukaku as a complete striker (a role that allows the attacker to play for himself and his teammates) will be central in the attacking areas and the other is #lautaromartinez, a second licensed striker to sweep across the entire front of the attack.

Tested for 1 season, no transfers

I tested the tactic by reforming the squads of the 2020/21 season in FM22. I remember that I test the tactics in a single season without making the transfer market (while for the others it is open), without doing specific training and without ever changing tactics either before or during the match and these are the results.

Eliminated #mancity #manutd #dortmun and #liverpool in the final

Victory of the Italian Super Cup

#lautaromartinez 22 goals and 9 assists. sixth in champions for decisive passes with 39

hakimi 10 goals and 13 assists. second in class dribbling Serie A with 146 and 2 also in champions with 23, fourth in champions for assists with 5

#brozovic 15 assists in the league, second in the standings and more than 20 this season. terzon in decisive passes with 147 in Serie A and third in champions with 43.second in Champions for asissis with 6