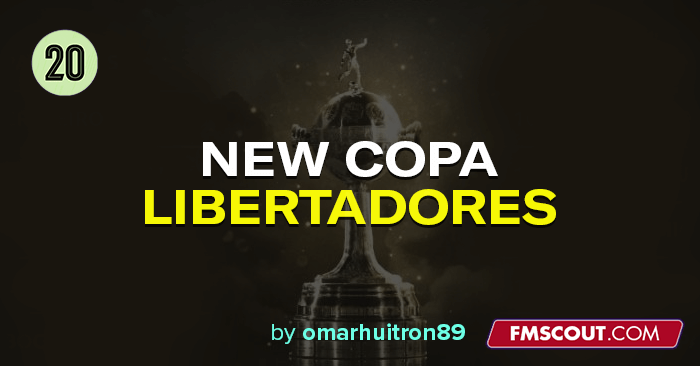 The tournaments are played annually as usual and only changed the classifieds a bit:

Brazil and Argentina: 4 direct to group stages, 2 to elimination phases

2 round elimination: 8 teams are added and the 8 eliminated, to advance 8.

3 elimination round: The 8 winners of the previous phase face each other and the 4 winners go to the group stage.

All the losers of these rounds are transferred to the Copa Sudamericana.

Group stage: the 28 direct and the 4 classified of the previous rounds, the first two go to eighths and the third to the Copa Sudamericana.

Eighth, fourth, semifinals and final: Same as in reality and with the final to a single neutral court game.

It is done just as in reality with phases of direct elimination, nothing that adds one more phase so that all those eliminated in the previous rounds of the Libertadores qualify for the Copa Sudamericana.

Mexico and the United States did not give them passes to the Copa Sudamericana as they continue to play the CONCACAF Champions League and would be many classifieds, but they can access it by being eliminated in the rounds of Libertadores:

First preliminary round: 32 teams added, 16 come from those eliminated from the first two rounds of the Libertadores.

First round: The 24 classified of the previous round and the 8 third of the group stage of the Libertadores enter:

Eighth, fourth, semifinals and final: Same as in reality and with the final to a single neutral court game

I add two files because when trying to fix that the teams of Mexico and the United States do not play Concacaf Champions League and Libertadores at the same time, the 2019 cups are not played.
Version 1: In this file the cup of 2019 is not played, but the Mexican and American teams only qualify for a competition (They do not play at the same time Concacaf champions Legaue and Libertadores)

Version 2: In this file if the 2018 cups are played, but the teams from Mexico and the United States may be qualifying at the same time for both competitions.

1. Extract the contents of the .rar file using a free tool such as 7-zip for Windows or The Unarchiver for Mac.

2. Move the chosen .fmf file to your "editor data" folder and start a new save with this database enabled.