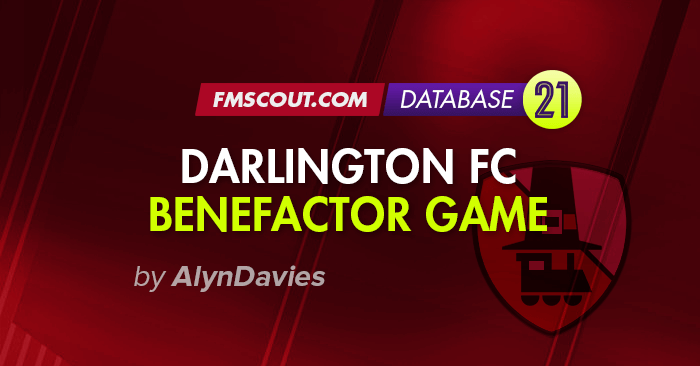 Darlington - The Story so far.

The days of George Reynolds ownership of Darlington FC are now a distant and happily forgotten memory... we look to the future!
In 2013 Darlington FC was liquidated, dropping out of the football league to Northern League Division One, they have now fought back to the Vanarama National League North after successive promotions.

Successful local businessmen Eric Openshaw and his brother Arthur, have sold their sucessful supermarket business and now they want to enjoy their money, and their retirement.
Eric's first love (other than his wife Vanessa), is Darlington FC.
As lifelong supporter of the team, he has now chosen to invest his time and money into his passion.

Using his millions, he has re-purchased the 25,033 seater Darlington Arena back from Moden Park Rugby Club as a staging point for his ambitions.

Having assembled a strong back room staff, (with probably too many good looking female physios and fitness coaches).

As well as a core group of cheap players whose names were designed to generate local and national interest in Darlington, he has selected YOU as the final piece of his master plan.

Your goal? To achieve what George Reynolds could not, and lead Darlington up the divisions.

Take your team of has-beens and never-weres up the divisons, while developing the gems in your youth team!

Arthur on the other hand has bought local rivals Darlington Town FC, they will be one division below you with the aim of catching you and beating you to the Premiership!

*Simply upload this editor data, and start a new game. I have also included faces for the new characters created so add them to your graphics folder if you wish to use them, instructions included.

1) You will play Darlington FC and have a B team set to Queen's Park, so make sure you load into the game Regional Divisions in England, and Scotland down to the lowest possible. I have edited the game to England can go down an additional Tier. Don't forget to make good use of Queen's Park as a development tool, it's better than U18 and U23 football.

2) Brexit is cancelled and Work Permits will work with much lower wage demands.

3) Eric's brother Arthur has purchased Darlington Town FC your local rivals, they start one division below you in the league pyramid, let by Welshman Mark Hughes they will chase you up the divisions!

4) Bury and Macclesfield are your main rivals in season one, expect a feroicious challenge from them in your first season.

5) Added and padded out most divisions meaning they will have 24 teams.

Hints and Tips
4-2-4 all out attack works best.
I always base my games on 4-2-4, and have only played this formation since Championship Manager 1993.

Load the game to Regional Divisions, (1 level below Vanarama North and South), this will activate Darlington Town FC, I have adjusted the editor so this is possible.
Additionally load Scotland to Scottish League 2 and above so Queen's Park will be your B team, send the players from your squad you don't think you need to develop in Queen's Park.
With Queen's park you have the simultaneous challenge of trying to eventually compete with Rangers and Celtic in Scotland.

As your older players retire you need to promote the young players into your team to replace them.

Bury and Macclesfield will be massive rivals in season 1, the head to head games will make a huge difference in who goes into the play offs and who gets promoted. If you fail to get promoted expect to be head to head with local rivals Darlington Town FC who are led by former Manchester United legend Mark Hughes.

I have set the amount of teams in most English leagues to 24 teams, as well as increased the size of the u18 leagues.

The Darlington Team is a mish mash of former wonderkids from older versions of Championship Manager and Football Manager who didn't reach their potential, they have been set to have realistic stats for the league they find themselves in. There are also a lof of "sons" of famous football players who got early attention based on their pedigree but possibly drifted out of the game or played in lower leagues.
Additionally you have a good youth team that will hopefully grow as you gain success at the club, these players are from Striker (Sun news paper cartoon), Footballers Wives (TV Servies), and other general media.

I have included some additional picture files for the newly players in the youth team, these are inactive portraits still in the large facepack that have built up over the years.