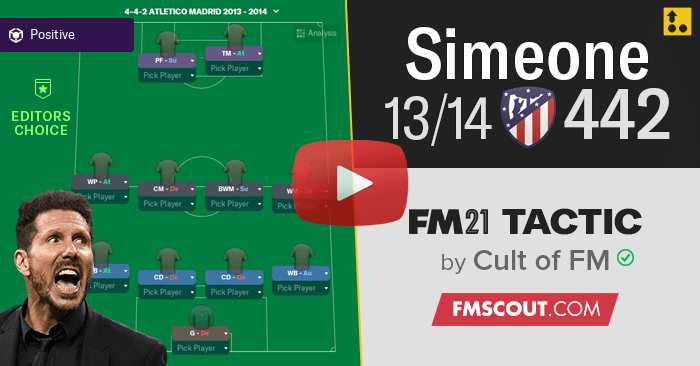 Here we have a tactical replication of Diego Simeone’s Atletico Madrid team from the 2013 – 2014 season.

This is just a way of replicating this team there are many other ways you can do it. I felt with these settings, instructions, roles and duties I got the closest replication in the match engine itself.

There are a few things to consider which are detailed in the video on the FM Scout YouTube channel. In a few bullet points though some of the issues with replicating this team in the match engine:

• The way in which a flat 442 defends in the match engine
• How to get one of your strikers in your 2 striker system to drop onto the opposition deepest midfield player but also playing as a genuine striker in possession
• The way opposition full backs are pressed when sat in a deep block and the danger they possess in the match engine versus real life.

The recreations I provide are designed to be tweaked. You can download them as is. I do a in depth piece of analysis from each team I replicate in real life and tweak what I see in the match engine until I get it close to what I’ve seen from real life.

I see these recreations as a blueprint in example if you are trying to create this style yourself and you’re struggling with how to do it, by seeing my way you might have the opposite to me and want to change to my style and use all of it.

You might like one section of it and prefer that way and just take that. You might not like much of it but see one or two ways I was successful and potentially add it to your own. All of these are perfectly great and I’m happy people find them useful in some form.

The only thing I would ask with any of my tactical recreations is to judge it in the match engine not the tactics creator. I personally don’t subscribe to the philosophy of “ x player wasn’t a x role he was a x” because the roles, duties & instructions are all correlated to each other and as long as they’re doing what they’re supposed to do in the match engine I’m happy with that.

Obviously in a recreation it makes sense to start with what you think is the closest role and duty is for the players. But what I’m saying is don’t worry about moving away from it if you feel you need to for the sake of it looking “correct” on the tactics creator screen.

If you want to replicate a Target man you can simply use the target man role like I have here. You could also replicate it generally by having a striker on an attack duty ( like an Advanced Forward for example), defending in a lower block & having the team passing set to direct and higher tempo.

With this when your team wins the ball they will all be back in a compact narrow shape with likely no good passing options then by instruction look to play early direct or long balls up to the strikers on a regular basis. Hopefully you get the idea of what I mean with that example!

One thing to point out is in the 2013 – 2014 season Diego Simeone’s Atletico Madrid conceded 26 goals that season. People often have an image in their head that Simeone recreations must mean single figures for goals against but this wasn’t the case in real life in the 2013 2014 season.

I provide lots more thoughts on this and the specific issues of the 442 in the video.

Don’t forget to download the defensive version to see out a game ( 80 mins onwards ) or the attacking version if you need to get a goal.

If you liked this feel free to jump over to my You Tube channel and subscribe if you enjoy the content! 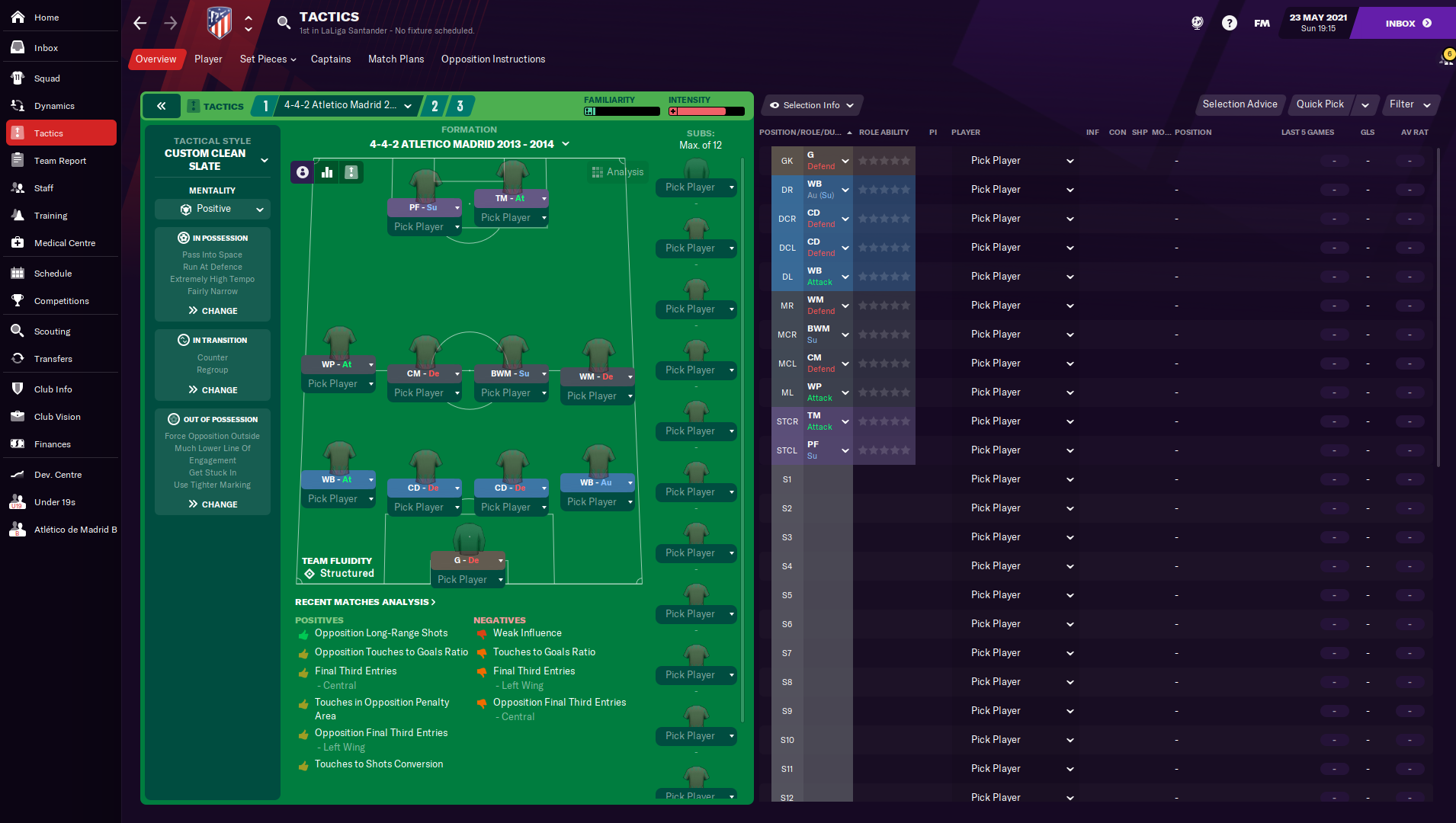 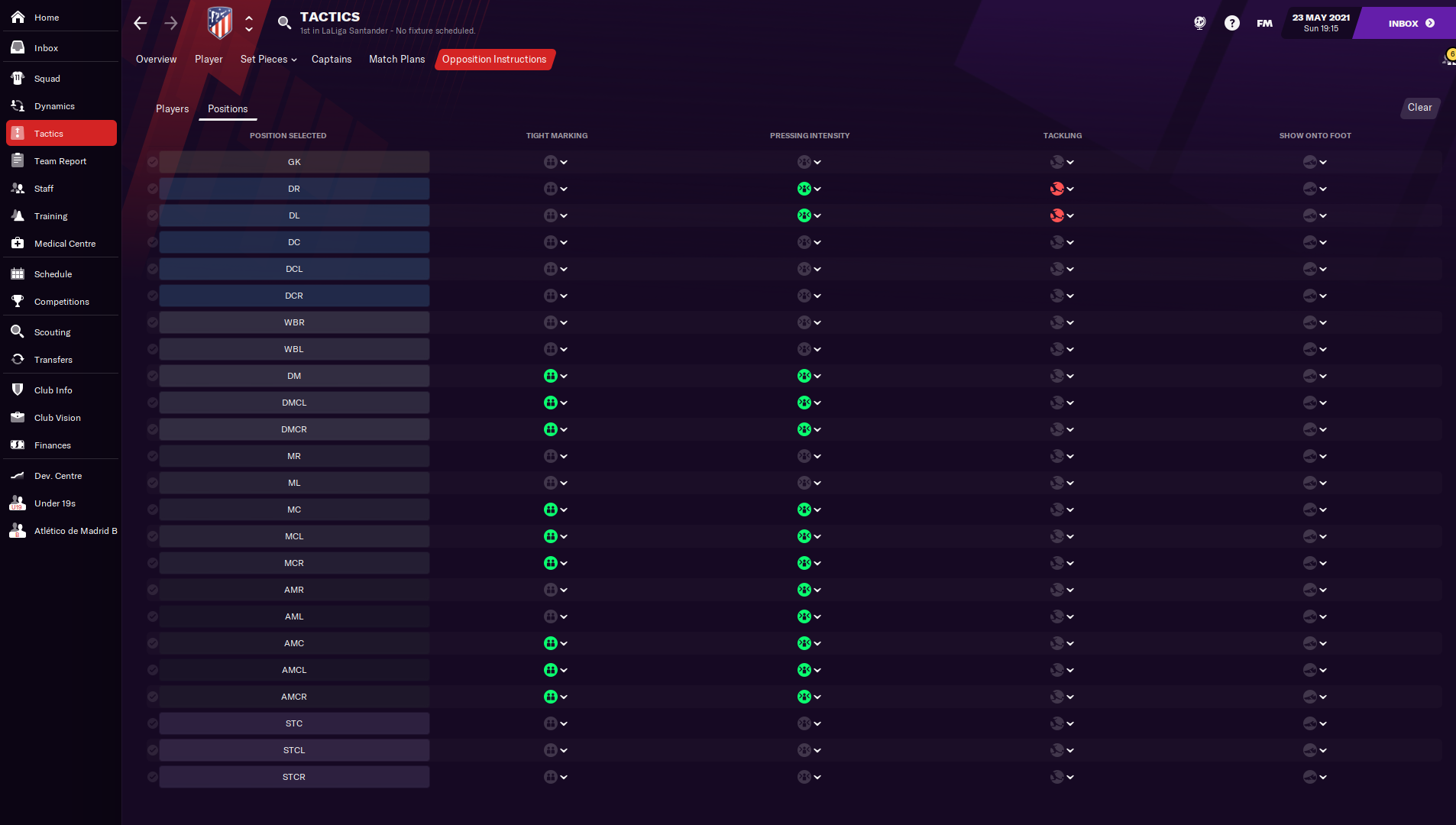 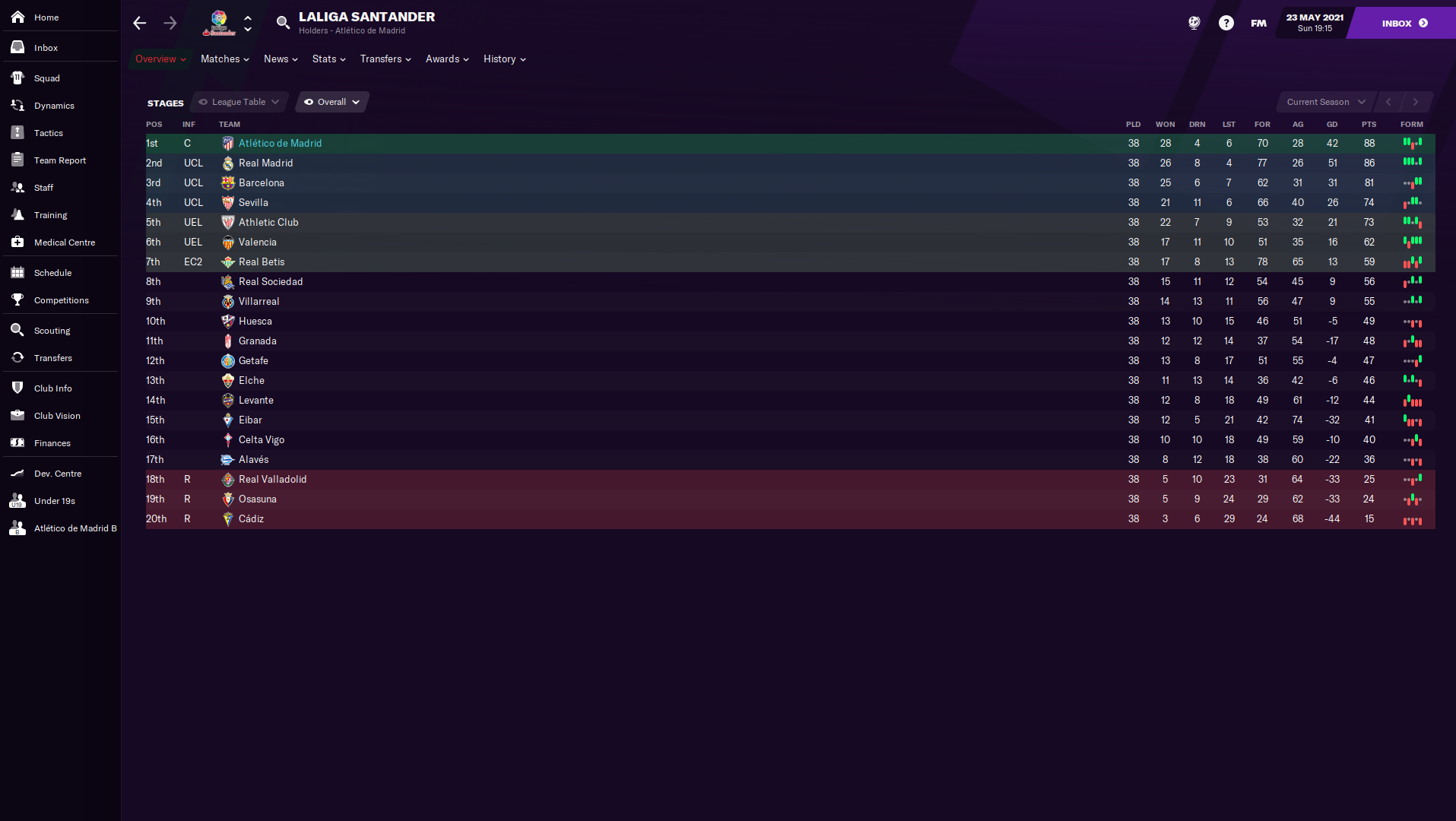 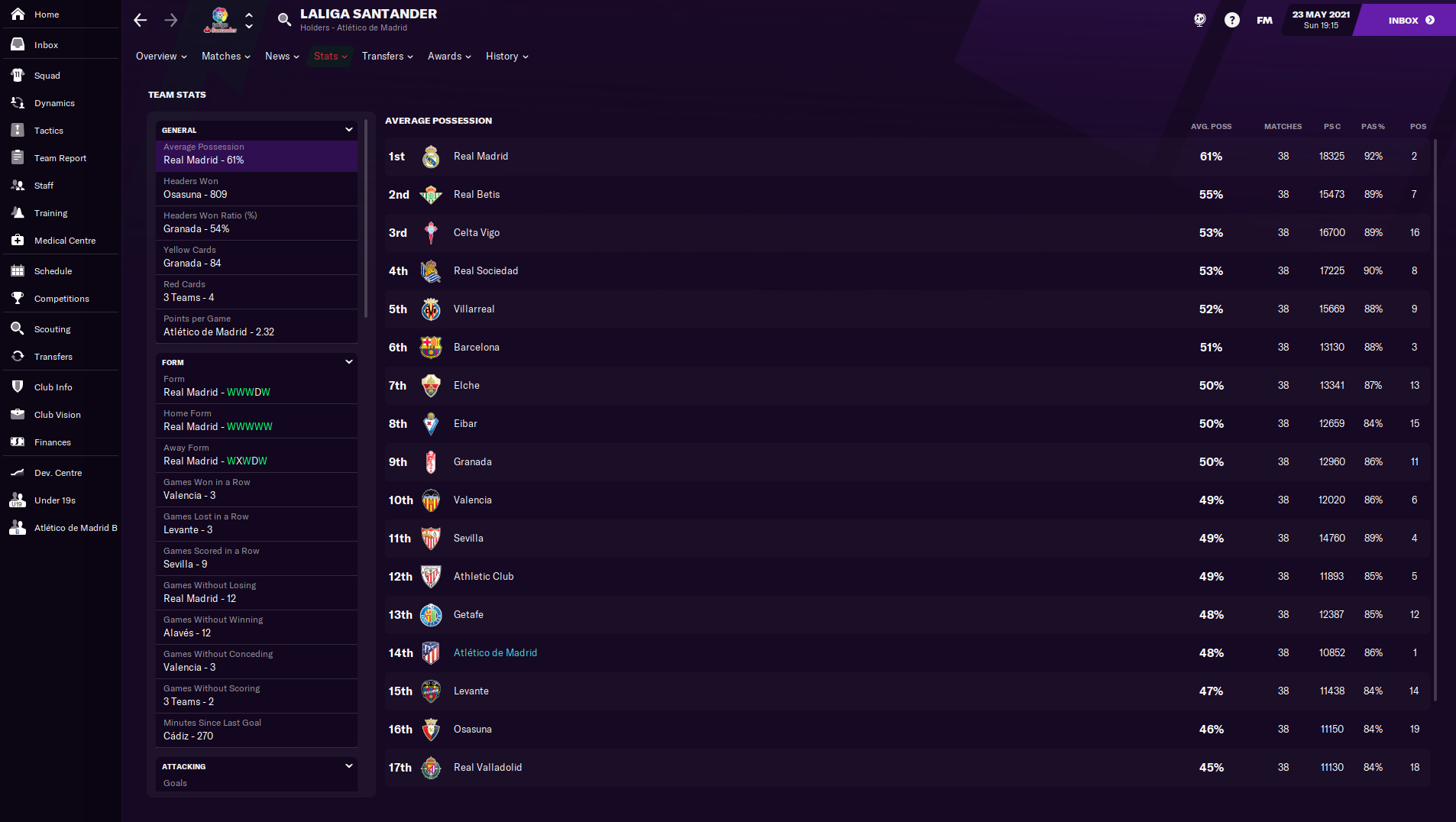 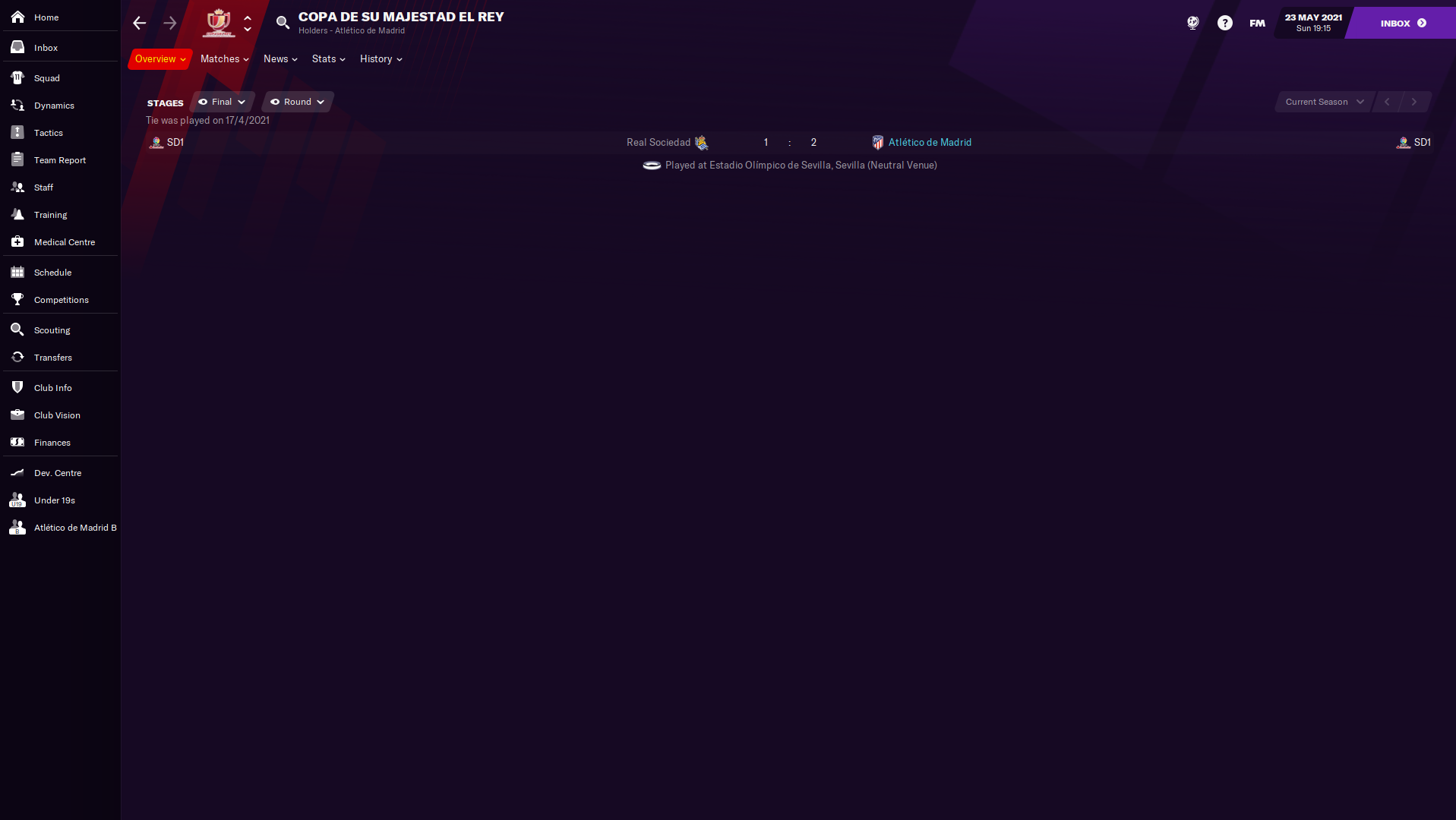