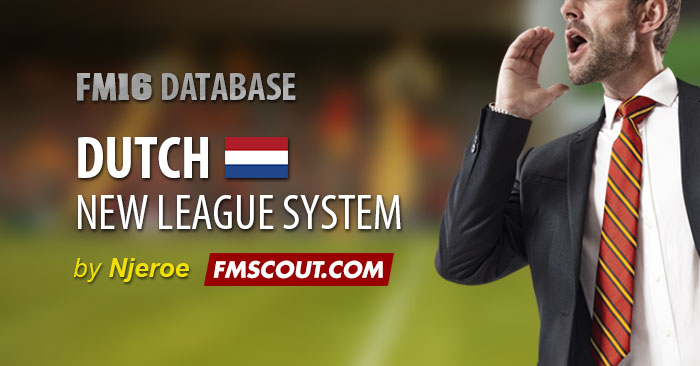 I created a small extension to the dutch league system. It now has 2 extra levels. Containing the 2nd and 3rd divisions which were changed from the previous season. These have been added to the existing league structure. Also some teams have their reserve squads added to the pyramid. These Squads are "Jong" teams they can promote and relegate, as long as they stay below their main squad levels.

League changes in this file are:

Relegation and promotion between leagues are as follows:

There are no new clubs added to the database (Logo packs, transfer files etc. should all work without problems), teams in the Eredivisie/Jupiler League haven't been changed to reflect the 2016/17 season. The Jupiler League does contain 20 teams now, Jong FC Utrecht has been added there. Other divisions are based on the 2016/17 season team entries.

I have tried to make it as close as possible to reality, however play-off spots in the Derde Divisie are not based on periods but instead on the standings at the end of a season. Starting date is set for the 2015/16 season not the 2016/17 season!

I have played 2 seasons so far and have solved most issues which I ran into, however there could be some issues still. If you have any please leave a comment. If there is enough interest I will probably expand this database further. If you have any other requests or questions please don't hesitate to ask.

You are free to use and change this file as you like.