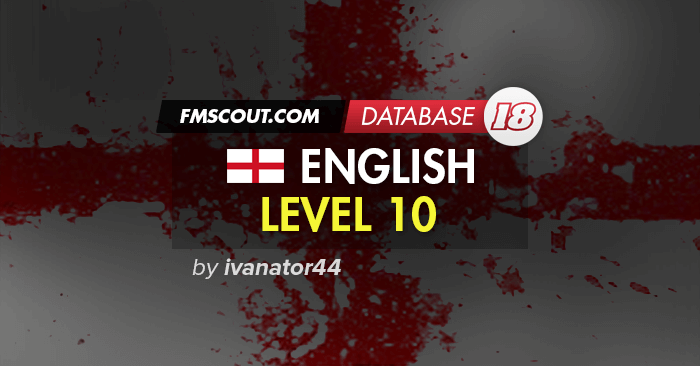 Taking FM18 down to level 10 of the English Football Pyramid.

Promotion & Relegation added all the way down to Level 10, Small amount of prize money added for the top 3 teams in Level 7-10

Regional boundaries added to try to keep teams in the correct regional divisions.

Awards added all the way down to Level 10 Leagues.

Changed season end date as some League's were still being played into the middle of June.

Attendances based on current real life average attendances apart from combined counties league premier division/1 & west midlands league as I could not find any data for these leagues. How to unlock the English Lower Leagues on FM18

2) Drag the file into your "Editor Data" folder. located at \Documents\Sports Interactive\Football Manager 2018\editor data. If this folder doesn't exist, create it.

3) Open Football Manager 2018 and start a new career, In the top right of the screen, under "Database", make sure "English Level 10 & Data Updates" is selected.

5) Once the database has loaded, click "Add/Remove League", then tick "England". The league will then be playable.

Recommended Settings
- It is highly recommended to tick "Add Players to Playable Teams" under advanced options, as well as unticking "Do Not Add Key Staff". This will ensure the database is populated with players and staff at all teams.

- Playing with an advanced database is also recommended. To do this, on the league select screen, click the "Database" option in the top-right, under Approximate Player Count, then click "Advanced". Under "Nations", click the "Add" dropdown, select Europe and tick England. Tick all boxes that appear, the click OK.