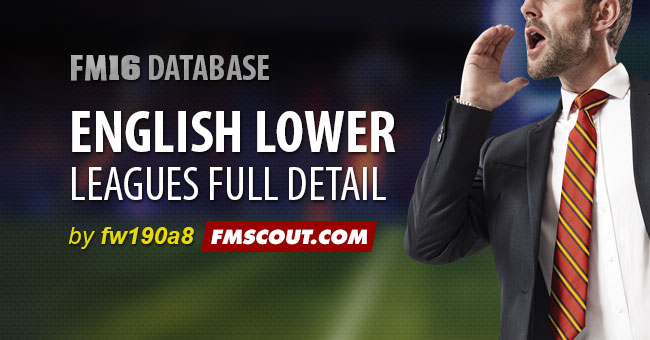 Progress: check out the Google doc

I saw a bunch of really hastily put together databases (clubs randomly assigned into leagues, all clubs with the exact same kit, randomly generated players) so I thought I would have a go at making something more realistic.

All clubs are in the correct divisions as of the start of the 2015-2016 season, and all to tier 10 are playable. The league rules are correct as far as possible with the basic rule editor. I will need to finish creating all competitions and clubs before delving into the advanced editor for fully accurate rules.

All clubs have appropriate youth squads and academy squads and includes competitions such as the Conference Youth Alliance and others. For clubs with a total of more than 3 teams, there is a separate affiliated "Academy" sub team. These are not yet playable.


FULL HISTORY AND ROSTER FOR KINGSTONIAN, ALNWICK AND SOUTH SHIELDS

Well, you have to start somewhere.

In order to keep the file size small, I'm not including the graphical assets (faces, logos, etc) just yet. These are being done alongside the editor data and will probably be released soon.

- All clubs playable in the correct divisions down to tier 12
- All squads to be club-appropriate with correct representation of reserve, U21 and U18 squads
- Full history for all clubs, as far as public records allow
- All club logos
- All kits correct
- All player faces where available
- Fully accurate cup system for all tiers


SHOULD I GET THIS NOW OR WAIT?

If you're the kind of person who wants to play one very long career and you very rarely restart, you should wait, since once you start a game, no future updates will be included in that saved file.

If you don't mind starting over a few times when new versions come out, there's no harm in trying this out in its current state.

Also if you want to help test the rules, the balance of the lower leagues, or anything else, trying this out and giving your feedback would be heartily appreciated!

It's very playable but most of the very low tier teams have random players and staff and inaccurate histories and finances at the moment, as well as missing logos and kits.

If you really want your local club in full detail, you can always send me a message and I will try to get it done, as long as it's tier 10 or above in the pyramid.