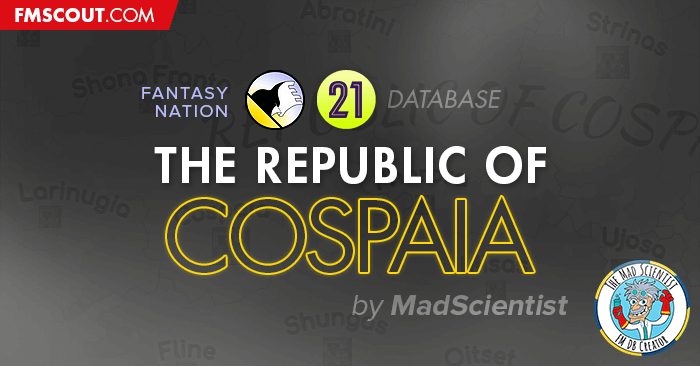 A fantasy nation for Football Manager.

The Republic of Cospaia was a small state within modern-day Italy which was an independent nation from 1440 - 1826.

It unexpectedly gained independence in 1440 after Pope Eugene IV, embroiled in a struggle with the Council of Basel, made a sale of territory to the Republic of Florence. By error, a small strip of land went unmentioned in the sale treaty and its inhabitants declared themselves independent. The nation was known as a anarchist state, as there where no taxes, and it grew rich from its tobacco production.

Watch the video for more backstory.

In this fantasy universe The Republic of Cospaia has risen from its ashes, and become a developed modern country.

Its now up to you to build this nation in Football Manager, and to bring glory to this great nations club teams as well as their national team.

The Republic of Cospaia is now a playable nation in Football Manager, with 3 league tiers, (Cospaia Serie A, Serie B and Serie C.) Domestic cup competitions and awards, with rivalries and derbies.

64 new teams have been created, from a total of 25 new cities, which are divided into 10 local regions. 63 new stadiums have been added, and the nation also has its own language, flag, weather systems, domestic media sources, journalists and agents.

With more than 1000 created staff members, more than 5000 created players, with player, club and league history, and last but not least uniquely designed club badges and kits for all the 64 Cospaian league teams.

I have cleared the entire database, and re-populated all nations with new players.

All player names have been randomized, and all the player attributes have been switched around so you won't recognize any real players.

I see this project as my masterpiece so far in content creating, as I've mastered all elements in the editor to get this DB done.


Get ready to conquer the world of football in this parallel universe.

You'll need all the graphic components to get the full experience with this database.

Download the Cospaia LOGOS (2 MB)
Logo pack made by TMS 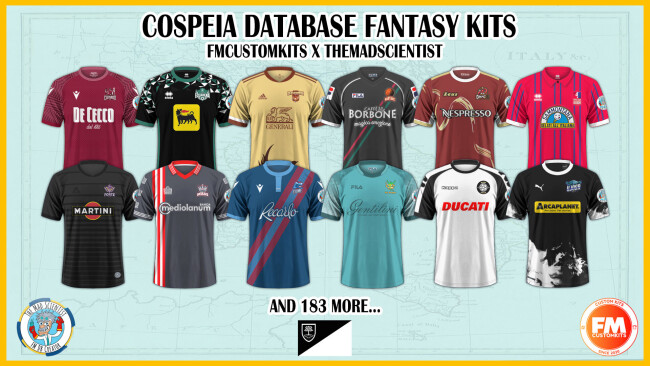 Download the Cospaia KITS (22 MB)
Kit pack made by FMCustomKits (Get 5% discount when ordering your custom kits from fmcustomkits.com - Use promo code "MAD5")

It's recommended to remove any active face packs. Suggested face packs to use (The Chilled Moose face pack, or Zealands New-gan faces).