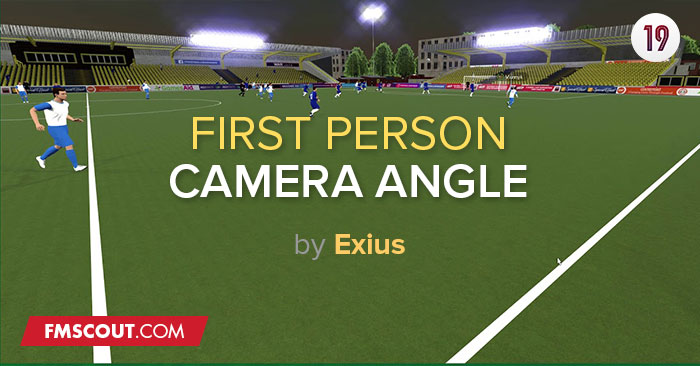 Since adding 3D engine to FM series there were some fans every year asking to add Manager or First Person camera angle to the game to be able to see the match from the eyes of your virtual manager. Of course FM is not FIFA or PES, and its graphic engine is nowhere near as modern and beautiful as in these games, but it's being improved every year and in 2019 it's pretty capable of rendering a decent picture even from such closeup angle.

I don't know whether SI are even considering a possibility of adding this angle in future versions but there is something we can try in FM 2019. There is a debug free camera which can't be selected by default but with easy manipulations you can activate it in the game.

How to enable this Camera Angle in FM19

Just download the attached archive, extract the file and put it to "" (you might need to create "menus" folder if you still don't have one).
Launch the game, start the match and pause it. Switch to 2D Classic camera and you'll notice that it's changed to "[D] Free".

Now you can control the camera - by dragging the mouse you change it direction and by scrolling the wheel you move the camera back and forward. With these controls you can get camera to the edge of technical area and literally watch the match from the eyes of a manager.

Even despite all the aforementioned, it's still an interesting experiment for those who seek full immersion and it can help to decide whether we really want SI to add similar camera angle in the future or not. For me personally it's very interesting and brings life to old saves which I decided to abandon long ago. I haven't decided yet whether I'll watch all matches with this camera constantly or not (because it's really difficult to understand how is your tactic and team performing and what you should change) but it seems I'm getting used to it and definitely want SI to give us such option in one of the future games.

P.S. You can modify the file yourself and try any other debug camera or replace any other camera with Free camera if you want to keep 2D. The only thing which we can't change is to make the camera follow the ball or to change height/zoom thresholds for any other camera (which can be interesting as well). It seems these are controlled by "" file but I don't know which application can edit it.

Many thanks to Exius for this discovery and for kindly allowing me to share this here. Original thread at SI forums.