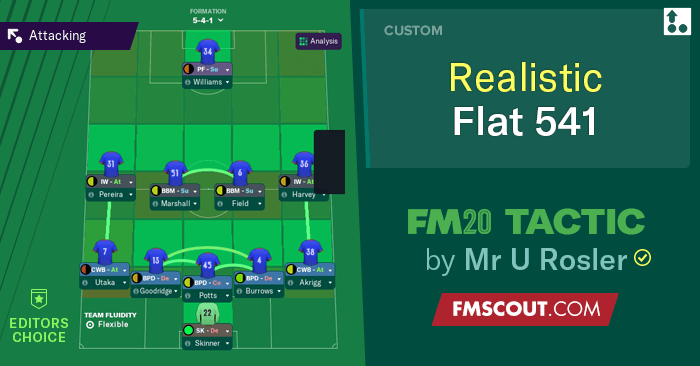 This tactic was originally devised for the last version of the FM19 match engine. People have successfully tested it on FM20 with clubs such as Athletic Bilbao and Brescia.
-Stam

Whilst my gung-ho 442 being effective, after 9 seasons I was getting a bit sick of the high scoring games and ridiculous shot counts, sometimes a combined 50 shots a game.

Typically, Premier League games average out at about 24 shots per games. Mid-level teams like Wolves tend to average 12 for, 12 against. Top Teams like City average an 18/6 split.

It was also in the back of my mind that I would get caned in the Premier League playing like that with an Academy Team with no time to adjust/improve to that level of football.

So I set out with the following objectives, create a more realistic match experience with a combined shot count of generally around the 24 mark (hopefully skewed in my favour), yet still scoring 2 goals a game whilst conceding close to 0.5 goals a game if I can (with a mid-level team for my division). 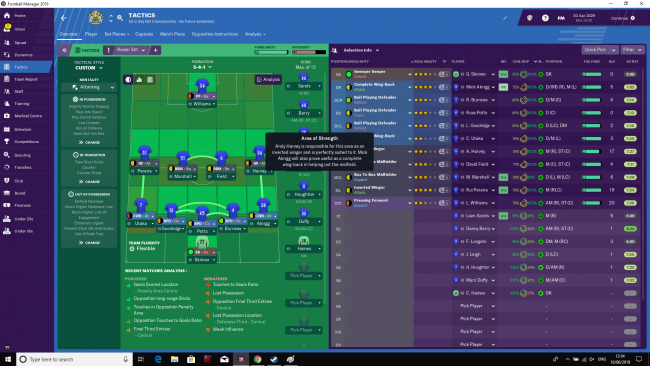 This turns out to be quite a satisfying way to play, in particular those thoroughly professional 0-2 away wins when we just turn up, shut down the opposition, craft 2 good goals and are out of there with the 3 points.

Games are over quickly, with far fewer, but more meaningful highlights as opposed the endless succession of long shots and goals mouth scrambles I’d become accustomed to, which sounds exciting but actually becomes tiresome.

Tactically I’ve already put up a 4141 which whilst closer to delivering my ideal than the 442 still generated ‘wasteful football’, with high shot counts and poor chance conversion rates so it was back to the drawing board.

I was committed to a 1 Striker formation as I need the extra defender or midfielder to be defensively sound, I had established that ML/MR were very effective this year as either traditional or inverted wingers so these would be in. This narrowed down the possible formations to 4141, 451, 541.

The 4141 I had tried and was not convinced, the 451 was good but a back 4 was just not solid enough defensively, even with toned down full back behavior. It had to be the 541, but it has a really defensive look, how could I get enough goals?

I tried inverting the Pyramid first with Inverted Wingbacks playing out to Wingers who hugged the touchline, (Playing IN to OUT) this works great with 2 striker formations but whilst there was a steady delivery of crosses we could not get support to our lone Striker quickly enough for this to be a consistent way to score goals.

So we flip the Pyramid back round, with a wide base playing to a narrow point with our Wingers Inverted and encouraged to get forward quickly, moving centrally to support our Striker whilst our Wingbacks play high and wide delivering crosses to a penalty area where we now have numbers.

Whilst we maintain a positive mentality, high line and press, we remove any means of forcing play (i.e. overlaps/underlaps, directing play thru the middle or flanks etc) and allow play to develop naturally as our players see fit. We also avoid hard tackling so play is not broken up and we avoid picking up cards.

We absolutely crushed the Championship, 28 points clear at the top with a team predicted to finish 18th. 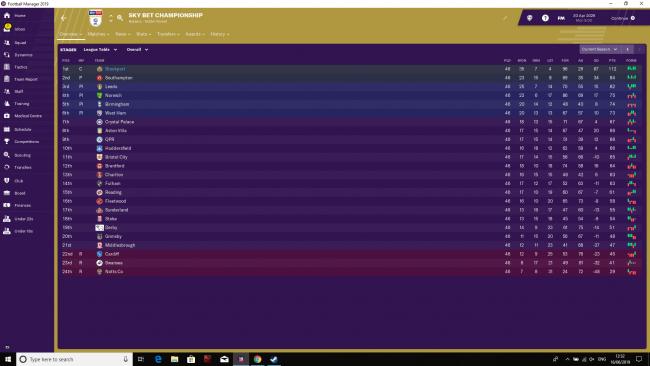 Having 3 Central Defenders stay back at all times means we are well equipped to snuff out counter attacks, in fact they were near impossible to penetrate at times. Far better than going with a DM.

Our possession stats were one of the lowest in the leagues at 44%, but our opponents were faced with breaking down two banks of 5, they would pass across the pitch and often backwards before eventually giving the ball away for us to Counter Attack. My main striker has 14 acceleration and pace, not slow but his understudy, although not possessing a great all-round game, has 17 acceleration and pace and he could crucify teams on his day.

We only conceded 29 goals all season. 16 from set pieces so only 13 from open play. A great result.

Whilst nominally only having 1 Striker, our Wide Midfielders are effectively auxiliary Strikers as illustrated by their goal returns below. A combined 57 league goals between my front 3, evenly spread with 31 assists as well.

Essentially, our Striker can run in behind or play with his back to goals as required, our Wide Midfielders attack the ‘channels’ whilst our Wing Backs overlap on the flanks. Normally a recipe for defensive disaster, but not with our 3 Centre Backs in covering positions.

Our central midfielders are true ‘box to box’ building and linking play, breaking up attacks and chipping in with some longshots.

Corners are not ‘gamey’, just lumped into a big bloke at the near post (still pretty effective), I set up throw in’s the 1st week the game came out, there is a structured routine but again, nothing tricky going on.

I have broadly met all of my objectives. Scoring 2.1 goals a game, conceding 0.6 with average shot counts across the season of 23.