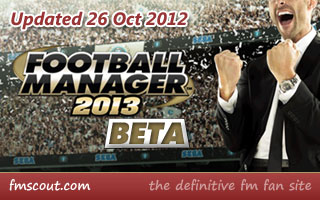 Available now for you all is an update of the beta, if you have automatic updates on your game will update the next time you open Steam (if you have the game open now, shut it down and then re-launch the game and it will update). If you find it is not updating at all, try verifying your game cache.

Once your beta has updated it will make your version number the following:


If you encounter any type of 'Virus' message when attempting to run the game, this is a false positive. There are no viruses within the FM.exe. We suggest adding the FM.exe to your exceptions list. This issue has been encountered when running Avira and Avast.

You can still pre-purchase FM13 at our official store at any time between now and November 2nd to get access to the beta version.
You are actually buying the full game which will be released on 2 November, but you get to play the beta now as a free bonus for your pre-purchase. The beta is not a demo, it's a full game (not final but full).
For more information about the beta, see Football Manager 2013 Beta Explained


Included are a number of fixes listed in the changelog below. Bear in mind that not all reported issues are fixed with this patch, and even more will be fixed for the final release of November 2nd. Although this is a beta update, this version is still a work in progress and is not complete.

Transfers and Contracts
Prevented new signings from becoming released immediately
Fixed free transfers not concluding
Fixed internal Director of Football hires
Fixed ‘Next Available’ transfer date being an option when using the ‘Approach To Sign’ option for a player in the last 6 months of their contract.