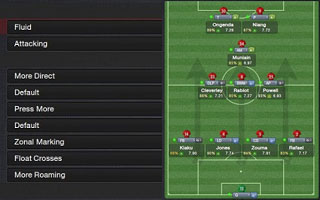 After using this tactic with a lot of success in FM 2012, I tried it again with FM 2013, damn what a shock the results gave, 6 games lost on a row.
So instead of hoping for the best yet to come, I adjusted the tactic a bit and it seemed to work better.
After the adjustments i tried it on different saves, and on different teams, from: Ado Den Haag and Ajax to Sao Paulo and from there on to Man utd. And all seem the teams seem to play quite aswell.

Don't expect to win every game with this tactic though, neither does it guarantee loads of possession in every match. But it still can provide a lot of goals with not to many goals conceeded.

A decent amount of shots on target and the passing wasn't to bad either. Possession on the other hand was slightly in their favout but who cares, we won the game.
Also a screen of the amount of passes/crosses/shots from the game against fio

1st PL game of the season

So almost everything was in my favour in this game, but a well played corner gave them the 3 points in the end.

Poor Arsenal, they did better on passing and possession, but overall the match ended in my favour due too 2 nice counter attacks.

Poor Everton they conceded 4 goals, within 15 minutes, and before the 2nd half started they were 6-0 behind. So after that the 2nd half i placed the team on controlling the game and placed in 3 youngsters.

So far the tactic has been working quite well again, and no the results are not obtained with saving and reloading. Also since its a Multiplayer save, as seen that man city is also controlled, i don't think my friends would be to happy with such a way of playing

A few sidenotes on the tactic

Depending on the type of players you have, the LD can als be a CD.
The AP I am either using as support or attacking, depending on smaller or bigger clubs and the player I use at the time.
Same for the Ball winning mid, he is either supporting or defending.
I also tried a few games with 2x a trequarista instead of 1 and a poacher. But then ended up in having an attacking midfielder be the top scorer of the team