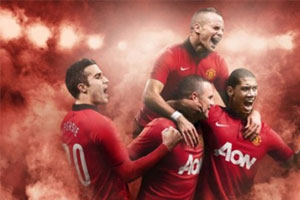 Following the success of my first Football Manager 13 experiment, involving Bayern Munich and Borussia Dortmund in the UEFA Champions League Final, which can be found here, I have decided to do another. This time, I will be looking at a particular team throughout the season - Manchester United.

All eyes will be on Manchester United this season, with a new manager, who has a lot to live up to, fierce competition expected from the likes of rivals City and London side Chelsea, while also being linked to numerous big stars. For this, I have moved the likely targets, and already announced staff changes, for Manchester United only, and simulated a season, to see how the Red Devils get on.


Although these are changes that are unlikely to all happen, they are the ones linked most with Manchester United. Although Cristiano Ronaldo is the star stealing most headlines with a possible move back to Old Trafford, I have left him out of this. Instead, I have used the editor to bring in the following players:

Ezequiel Garay - Garay, currently a defender for Portugese side SL Benfica, is a favourite to sign for Manchester United. With a rumoured gentleman's agreement having been made, for a fee of around £17 million, Ezequiel is a player who could certainly be seen playing at the Theatre of Dreams very soon.

Leighton Baines - Baines has recently become known as one of the best left-backs around, and certainly in England. With Moyes taking over as boss from Everton, many expect him to make a swoop for Baines, with Evra and Buttner not quite at the level needed to play week in, week out for a side like United.

Thiago Alcantara - The Barcelona and Spain midfielder is already a star at such a young age, recently bagging a hattrick against Italy in the U21 European Championship's final. Thiago has expressed his unhappiness at not being able to play as much as he wants, due to the likes of Xavi, and it is rumoured Manchester could be his next stop.

Kevin Strootman - Another midfield linked to a move to United, which also seems very likely for a fee of around £10 million, possibly forming a very strong connection with Thiago, a partnership that could destroy many English and European teams for years to come, which the recent departure of Paul Scholes.

Guillermo Varela - Manchester United's first signing of the season, confirmed a few weeks ago. The Uruguayan right back only cost the side £1 million, so may not get to feature often, but certainly has the potential to become a star, battling with Rafael for the place in the starting XI.

Three players were also released from the club through the changes. Wayne Rooney has been linked numerous times now for a move away from Old Trafford, and this time it looks likely that Wayne will be on his way, with clubs such as Arsenal, PSG and AS Monaco all lining up a possible bid for the Englishman. Rooney was signed up by Manchester City. Nani was the next player released, also being linked with moves away, with the introduction of Zaha, with Valencia and Young already having the edge in the team selection. Nani ended up at Arsenal. Finally, Paul Scholes was released due to his retirement but didn't join another club.

Some staff were also changed. Sir Alex Ferguson left his role as manager and became a director at the club. David Moyes became manager, and as in real life, now have Steve Round and Chris Woods replacing the recently fired Mike Phelan and Eric Steele, the assistant manager and goalkeeping coach respectively.


With Moyes in charge the summer transfer window was still available in game. Manchester United sold just one player, Anderson, leaving for a fee of £11.25m. Numerous stars left on loan, and one player was bought in, another central midfielder. Tottenham and Brazil star Sandro joined the Red Devils for a fee of £19.5m.


Pre-Season showed some excellent early performances. A reasonable 1-1 draw in the first game developed into some great wins, including two 4-0 wins over both Seattle and Antwerp, conceding just 2 goals across the five games while scoring 13 goals!


Manchester United had a very solid start to the season, and with twenty games played, were sitting a solid 8 points above second place Manchester City. Just two games had been lost, and United looked in pole position to retain their league title from the previous season. A respectable goal difference of +20 will also help the side, being the highest in the league.

However, the club faced some fairly mixed results over the first few months, although many positive. A 5-0 destruction of Southampton was a great way to kick off the season, while also playing in a few 5 goal thrillers, winning 3-2 against QPR, Swansea and Reading. A shock defeat to Aston Villa would have hurt the side, not helping by a 2-0 defeat against Arsenal just a few days later. Nevertheless, the side picked up a lot of vital points, including a single point in a 3-3 draw with rivals City.


After the arrival of Sandro in the summer, as well as the other big signings included before the takeover from Moyes, United fans didn't see anyone else join the club. Besides the many youth players leaving the club on loan for the rest of the season, Darren Fletcher was the only player to leave permanently, joining Paris-Saint Germain after recovering from his illness, costing the French giants £6.25m


Manchester United held onto their league to secure the Premier League title for a record 21st title. Although the gap slipped to just 5 points, Manchester City couldn't reach the title, even with the help of former United star Wayne Rooney. The reds finished the season with 7 losses, considerably more than the start of the season, also letting the goal difference slip slightly. Nevertheless, Manchester United were Premier League Champions.

Once again, the club fell at the hands of some poor fixtures, while also gaining some excellent results at other times. A 4-2 win against Stoke was a good way to start the year, but loosing 2-1 to Southampton, 3-2 to West Brom and 4-2 to Liverpool over a short space of time could have affected the club badly. Results began to improve again though, picking up 6 wins in a row while conceding just 3 goals. The next one would be one of the worst all season though, losing 5-0 to Chelsea at Stamford Bridge, followed by a draw against Arsenal and another loss to Everton soon after. United managed to finish the campaign with a win against Norwich though.


As a club, the squad did pretty well. They finished the season having scored 73 goals, just one less than rivals City, who scored the most. However, the boys did concede 48 goals, making them 9th best across the league. The players seen to have more success as individuals though. Leighton Baines received an average rating of 7.87, the second highest in the league, only behind Eden Hazard of Chelsea. Baines, Vidic, De Gea and Sandro topped the list of most wins as players, ranging from 25 to 22 wins. Leighton Baines also managed to grab 18 assists, the most in the league, with second place getting just 14. Robin van Persie scored 16 league goals, the most from one player in the Manchester United squad, meaning he only managed 6th place in the Golden Boot award.


The FA Cup was the club's most successful cup run, reaching the finals and getting some big scorelines. The third round saw Birmingham defeated 2-0, followed by a 3-0 victory against Fulham in the fourth round. London club Arsenal were defeated 2-1 at the Emirates Stadium, and Manchester City were demolished 4-0 at Old Trafford, sending United through to the semi finals. It was there where they beat Sunderland 2-1 after extra time, earning their spot in the final. However, they couldn't jump the last hurdle and lost 1-0 to Liverpool.


The Capital One Cup was quite frankly awful, losing 3-1 to Newcastle in the third round, being knocked out almost immediately, an awful result, ending their very short Capital One Cup campaign. Tottenham went on to win the cup, beating West Ham 3-1 in the final.


The Champions League was also an awful campgaign. Drawn in a tough group against Juventus, Dortmund and Olympiakos, the side should have battled for at least second, but ended up last with just 6 points, due to beating Dortmund and Olympiakos. 3-0 wins against each was good, but then losing 4-1 and 4-3 couldn't have helped morale, meaning United couldn't even qualify for the Europa League this year. Barcelona went on to win 1-0 against Real Madrid in the final.


With the five players who signed helping enough to win the Barclays Premier League, but little else, how did they each get on personally?

Ezequial Garay - Garay had a solid start to his United career, but after picking up an injury, joined the reserves side for a bit, and then couldn't get back into the first team. Garay played 15 times for the first team, scoring once.

Leighton Baines - Baines became a star player, claiming the most league assist, and overall picked up 9 goals and 22 assists in 50 games, achieving an average rating of 7.90 in all competitions.

Thiago Alcantara - Thiago didn't manage to kick off his United career despite being packed with talent. The Spaniard only managed to start 9 times, while also coming off of the bench 9 times. In this time he managed to score 5 goals, 2 in the cup and a hattrick in pre-season. Thiago also gained three assists.

Kevin Strootman - Strootman, like Thiago, couldn't get his United career flying well. Strootman played just 12 times while coming off of the bench once. He managed 4 goals in this time, while getting 2 assists.

Guillermo Varela - Valera wasn't really a first team player and didn't manage to feature for the first team. However, he became well known in the reserves side, playing 20 times, while managing to score 4 goals and assist a further five, claiming the Man of the Match award three times.


So with these signings, the side managed to win the Barclays Premier League for the second year running. However, they had little success in the cup, especially in the Champions League and Capital One Cup. Leighton Baines proved to be the key signing, with the others failing to make a key impact on the results and performances. Nevertheless, Manchester United are once again winners of the Barclays Premier League.

Discussion: FM13: United's Targets Could Give Them The Title