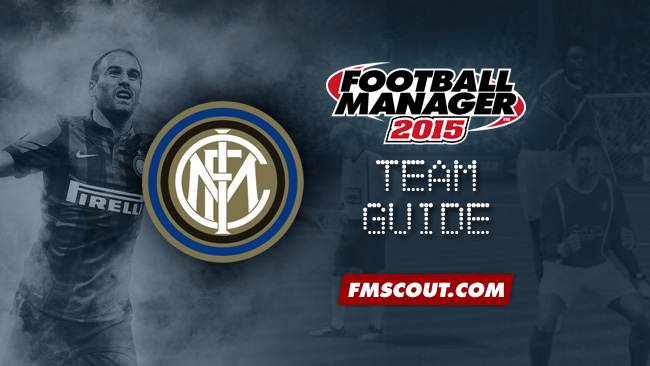 Welcome to my very own personal Inter guide, as you may know I'm an actual Italian based fan that's supported Inter his entire life, so you will get the very best of the best from this guide, and hopefully help you sort out your squad priorities as quick as possible.

Now, Inter are a very prestigious Club they're the only Serie A club that have spent their entire history in the Serie A.- Before AC Milan gained popularity in the 80s, Inter and Juventus would play what was called "The Derby D'Italia" which was the derby between the two MOST supported Clubs in all of Italy, by a great margin. They vant the beauty of 3 Champions League victories, 2 Champion Finalist runners up, 3 Uefa League Cups, 2 Intercontinental Cups, 1 Fifa Club World Cup, 18 Scudettos, 7 Italian Cups, 5 Italian Super Cups and a pretty nifty Treble achievement in the 2010, alongside of Mourinho & the auld boys, though since then the club has been in an unfortunate decline.

And this is where you come in! Your task will be to "restore" the club back to its glory days, hopefully by first achieving Champions League qualifying football, making a bit of income and increasing the clubs reputation high enough so that you may be able to sign some respectable footballers from all over the world.

The clubs finances itself are a mess, you'll find yourself starting with almost €300m in loan debt, and a projected balance of €100m. Your starting budget will be something along the lines of €12m transfer budget, and really high player wages, of course you can attempt to set higher expectations which would raise your transfer budget from €14-16m, and by shifting the budget wages to the right hand side you can amass a good €20m+ for your first transfer window, which in Serie A is a god blessing.

The 4231 is a modern formation used by most clubs nowadays, and can be adapted to Inter by doing a few modifications. First of all, you have no pure AML/AMRs, therefore you'll have to retrain Kovacic, use Guarin, maybe even Palacio with his high workrate. Another problem here are fullbacks, but that's a problem you'll have with any formation you choose to go with.

The 3-5-2, or 3-5-1-1 when used with an AMC, is the most "adapt" to the squad you have, although you probably won't get very far against top teams whilst using this, as it's pretty predictable to contain, with either long balls to the strikers up top or crosses from the flanks, your best bet is to go for a short passing style that links up the midfielders to the deep lying striker, with the central midfielders set to attack and go into the box for support. As for the defense, it does help a bit to have 3 defenders and 2 complete wing backs to help you cover the major flaws this team has, so if you find yourself leaking too many goals - this could be a solution, while moving the defensive line deeper, or much, much deeper.

The Christmas Tree formation! It's in the spirit of the Season that I suggest to you, the 4321, with the many midfielders available straight away to you you can use this quite effectively by setting them to attack and insert themselves through the middle, the AMCs should be given freedom to express themselves, Guarin and Hernanes would probably fetch quite a good number of asissts for the lone striker, be it Icardi, Palacio, or Osvaldo.

I've picked these three tactics, as the most suitable for the starting team, keep in mind you have no proper fullbacks, the team was built by Mazzarri to mainly enterprit a 3-5-2, which means your fullbacks, Jonathan, Nagatomo, D'Ambrosio, Dodo etc. are actually wide midfielders that run up and down the pitch, and in my opinion are very poor in defending, if not covered by other teammates.

So when you find yourself trying to adapt the team to a back four formation you'll have to keep in mind, first thing you may want to do is sign some good fullbacks, with decent marking and tackling to give you some reassurance defensively, and depending on how many Strikers you utilize, you may want to sign one or two more as the club only offers 3, alongst the young prodigy Federico Bonazzoli in the clubs youth academy - who in a handful of years becomes one of the most complete forwards in the world.

The Goalkeeper repartments are set up pretty well, Inter have always been known in Italy for the top Goalkeepers they boasted, from Julio Cesar, to Toldo, to Peruzzi, and of course the great Walter Zenga. Your choice really, Handanovic is the starter with no shadow of a doubt, but if you choose to sacrifice him for €20m+ to increase your transfer budget you could always look to replace him with a young promising Goalkeeper like Maxym Koval, or Jeronimo Rulli.

Unfortunately, this section is chopped into bits of players that may or may not be able to effectively interprit this position, as only D'Ambrosio is a pure fullback, while the rest are either Right Midfielders that can also play at back, or Center Backs like Campagnaro. My suggestion is to look for a Right Back as soon as possible, someone like Allan Nyom, Serge Aurier, Gino Peruzzi etc.

Only the first 5 are actual Center Backs, Medel is a last resort incase you are in dire need, or are playing Ball Playing Defenders and need someone able to long pass. You're pretty much set in this repartment aswell, the reason theres so many Central Defenders, like I've said before is because the team was meant to play 5 at back, so needed more players to rotate. Vidic is the strong point, Ranocchia can be good if hits form, Juan Jesus is a great prospect and will be easily valued €32m+ in the future, Andreolli should be sold if not needed.

Theres a lack of decent fullbacks here, more so than the right side. They're basically only good at going up, you're gona need to invest here, or you'll find yourself playing right footed fullbacks here.

I don't think you need to worry about this position, you're well covered by many options.

You should sign central mids only if you sell your own first, as theres plenty to go around, they're not first class but some do eventually get there, like Kovacic.

Same as right midfielders, you should be alright.

Now lets get this straight, Palacio isn't an Attacking Midfielder, Kovacic needs to grow into it and Joel Obi is a last resort that is played at your own risk. Having said this, you should look for players like Bakkali, Bruma, Bernard, Quintero, Oliver Torres, L. Insigne etc. That is, if you look to play with more than one AMC, it comes down to what you need.

What are we going to do then? Play lone striker? Two up top? You've got 3 and a half man, you might want to look for a fourth at least. I don't think I can give you a succesfull recomendation for this position, as it's controversial and everyone has their favorite type of striker, be it a false 9 or a ramming target man in the box. You should know best, so I'll leave this to you, just know that Icardi & Bonazzoli in a few years will become goal machines (Icardi might start sooner...) and will be valued well over €40m+ in market value.

I'm laughing right now, because this team is composed of mainly weaknesses. Theres very few strenghts, therefore you should realize this will be mainly a "rebuilding" job, from top to bottom. I'd start with the flanks, from fullbacks to wingers, bring in some pacey players that will beat the opposition on counter with ease, the only place where you can sleep safe dreams is the Goalkeeper right now, Handanovic is rock SOLID.

I've played over a dozen Inter saves already on FM15, It's the team that I support and it's the save that I enjoy the most, therefore I can tell you that my opinion might be very biased, but once you do get the team going, and you start challenging Juventus for the Title once again this save turns out to be really fun for those that do enjoy Serie A football on occasions, you may very well find yourself playing till' 2024, like myself, you never know.

If you found this guide helpful, let us know. Write a short comment telling me if you think this guide has helped you, informed you, given you a general direction or whatever, I just appreciate any kind of feedback - even non-constructive criticim!