I am playing this game like most of you for decades, but this is my first guide. After my recent experiences within game, I discovered a very good playing style which I enjoy watching with good stats and scores, so I decided to share it with my fellow colleagues who might be searching for a way out or seeking a different approach.

First I started to see some flows, like A.I. doesn't attack with the ball in front of him; he just can't decide whether to move forward to take it or go back. It's like I saw an imaginary circle around him which his software tells him to go to ball, but the ball is on the edge of that image so they conflict, and he just got nailed there while opposite striker get a free goal.

So my first target was to use as much as less directives to give my team A.I. freedom to counter these flows, and it worked.

Next thing was finding an all around effective build which I can keep the same formation with different instructions for away-home games or in game control considering the score, minute and the effect on stage (league, cup, tournament).

I tried almost every tactic here, I watched YouTube tactics, applied them, I made some according to those guides, yea they worked but I wasn't happy. Until I tried this one, it's fun to watch, it stopped Tottenham who normally beat me for 6 goals or more. Pictures I shared belong to the 2nd best team in my league, they finished 2nd last year and beat 2 other big teams already until my team wiped them from the pitch with this tactic.

So I decided to share it, it's very simple, you can tweak it during game as u see fit, but I advice you to keep it as simple as you can. 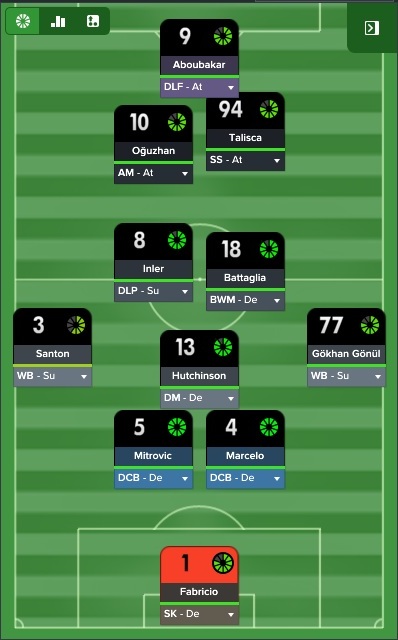 It looks like a 2-3-2-2-1, I've done this to counter big teams we face in CL, they usually play a 4-2-3-1 with attack and complacency, so I tried to exploit this even further in media talks. About the player roles, I tried to find a balance between what system I want, and what my players want or capable of in that position. Bottom line you can say this is just a framework, you need to edit and build on it as you like.

Goalkeeper - This doesn't matter much, i picked sweeper because my keeper has a nice rush out.
Central Defenders - I used DCB because my defenders always have a guaranteed yellow every game no matter how nicely we play.
Wing Backs - Support with stay narrow and cross more often PI, they offer nice wide play both offence and defence.
DM - I prefer anchor man vs. bigger teams in CL. , for others i keep it as a DM defend to offer a pivot high up the pitch.
MC - 1 maestro and 1 dynamo to keep midfield in control both attack and defend wise.
AM - These 2 give support to middle when needed while making chaos in opp. defence especially when they don't have a DM.
ST - DLF operates well here, making team play like 3 strikers with his moves and passing, while attacking incoming crosses from wings.

As I said above I kept it simple to give my players freedom and avoid A.I. conflicts. When I see fit, I change them a bit during play, but I don't touch anything that would effect their movement or engage zone. 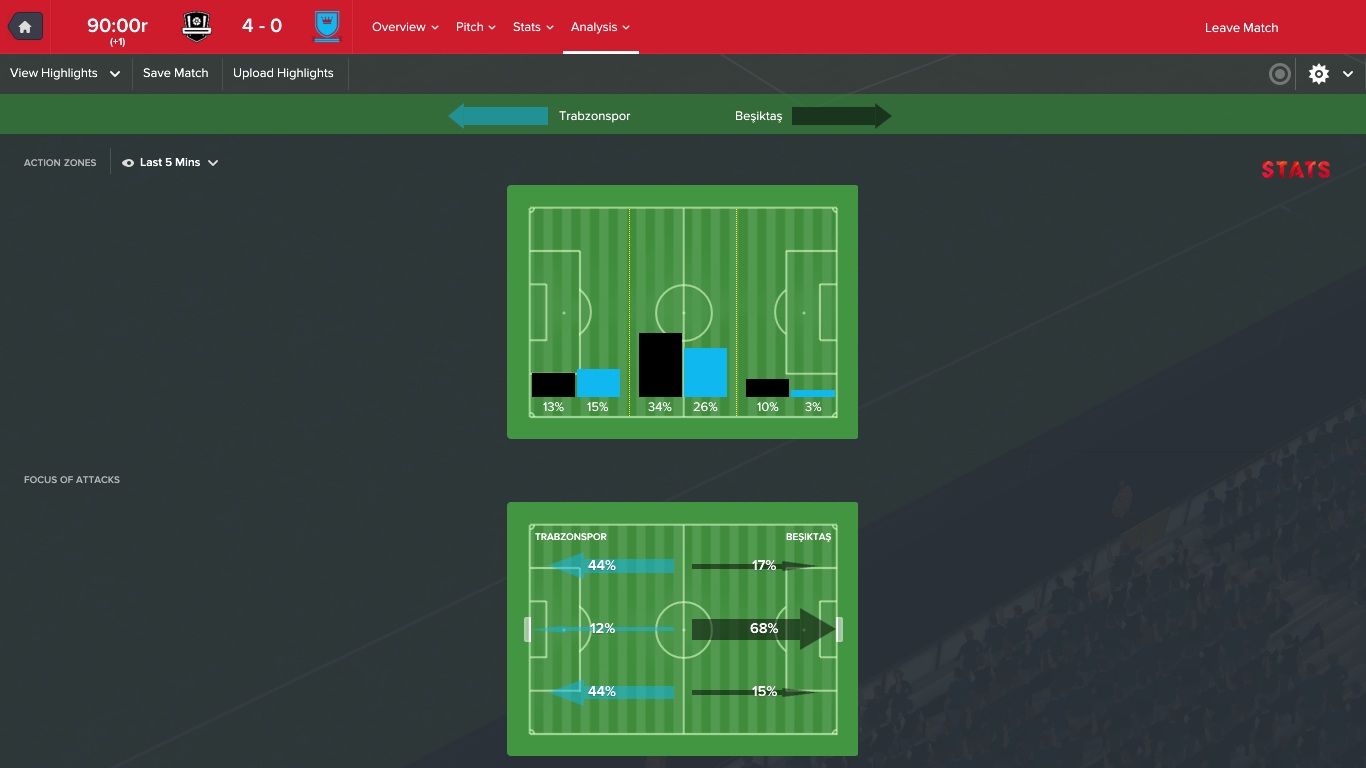 Some data analysis to give you an idea how the game usually played in which zones. This is from a winning game, but keep in mind I have a team that can concede 4 from a bottom league team and my opp. is 2nd best in the league. So I count it as accurate data overall. Well it stopped Tottenham in their home, that's enough for me and to be honest I could even win if their keeper didn't jump 3 meters in 0.5 seconds 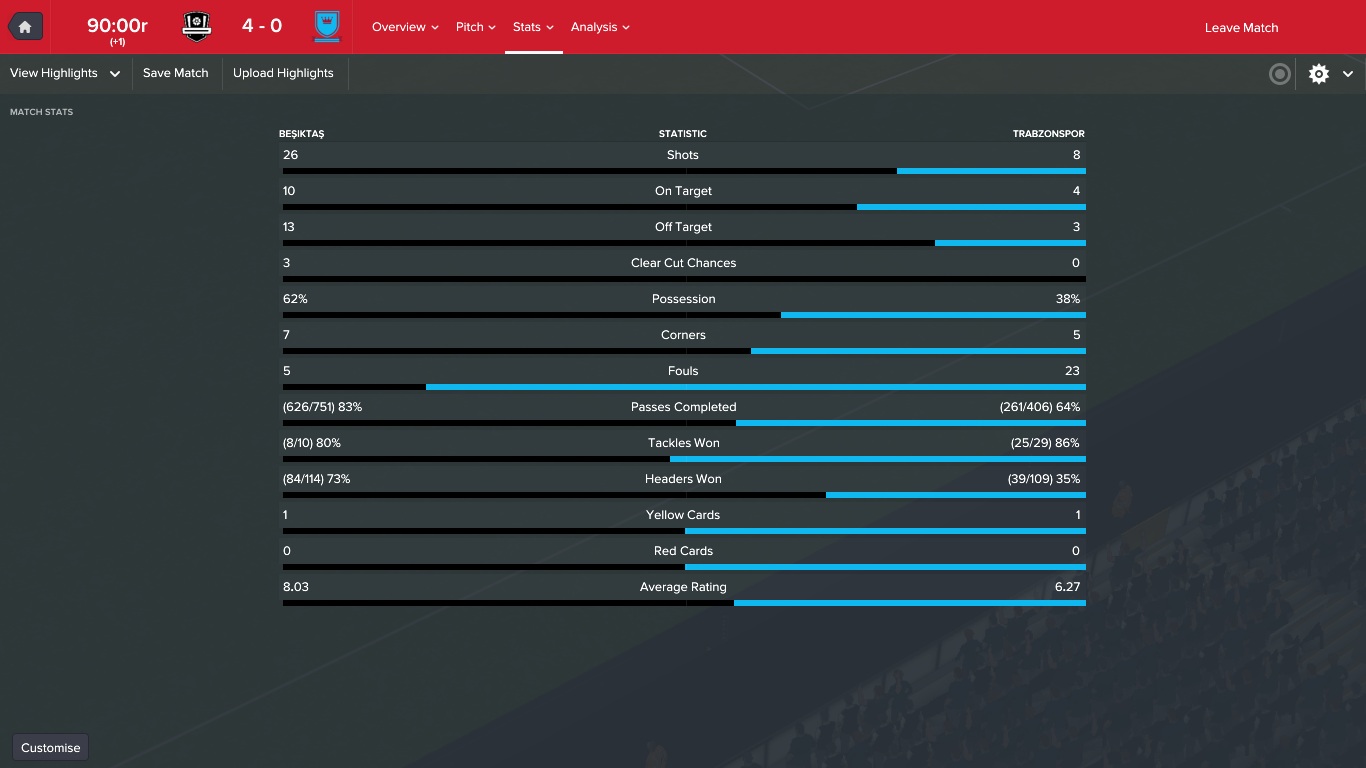 These are the game stats, as you can see we didn't just play good to watch football, also we had possession while getting shots at opp. keep, A+++ 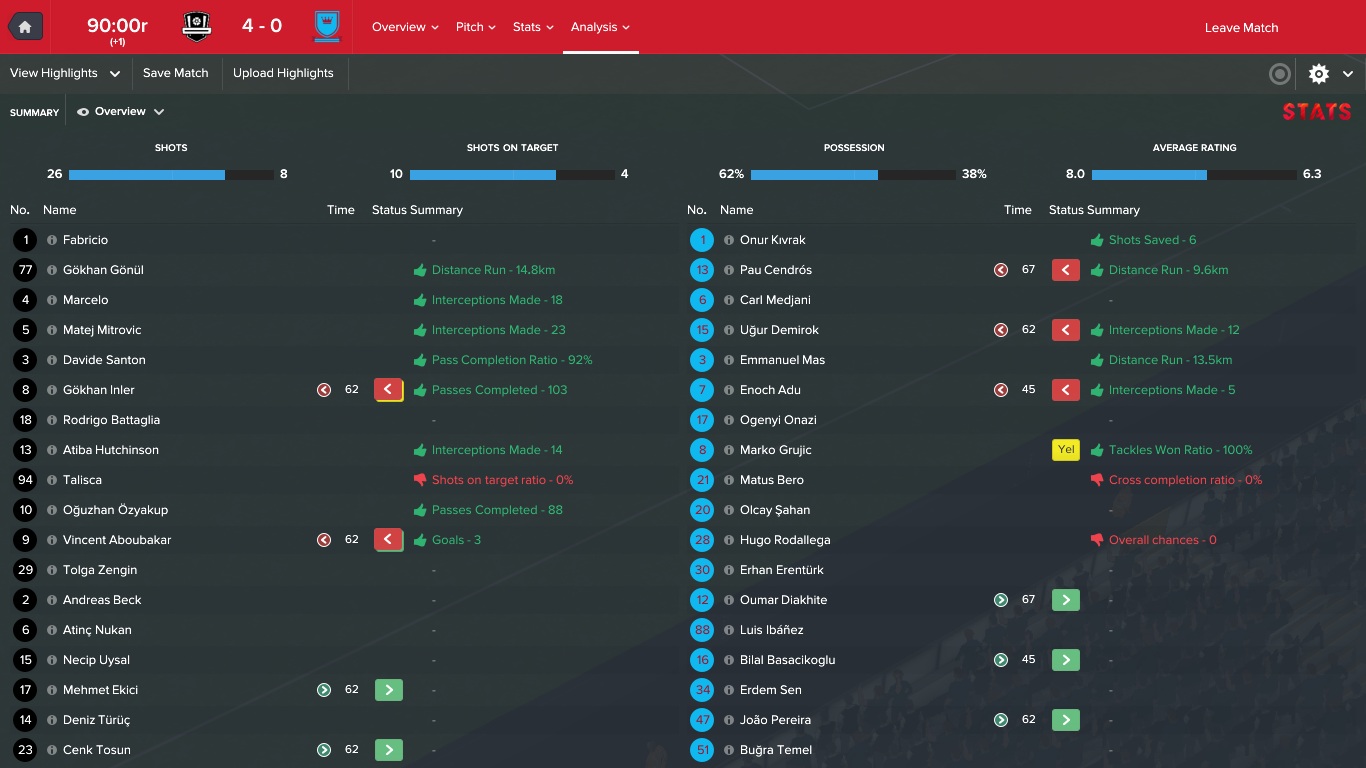 Some notes on player efforts, my SS scored 2 last game while my key player didn't hit target once this game, bad day at the office. 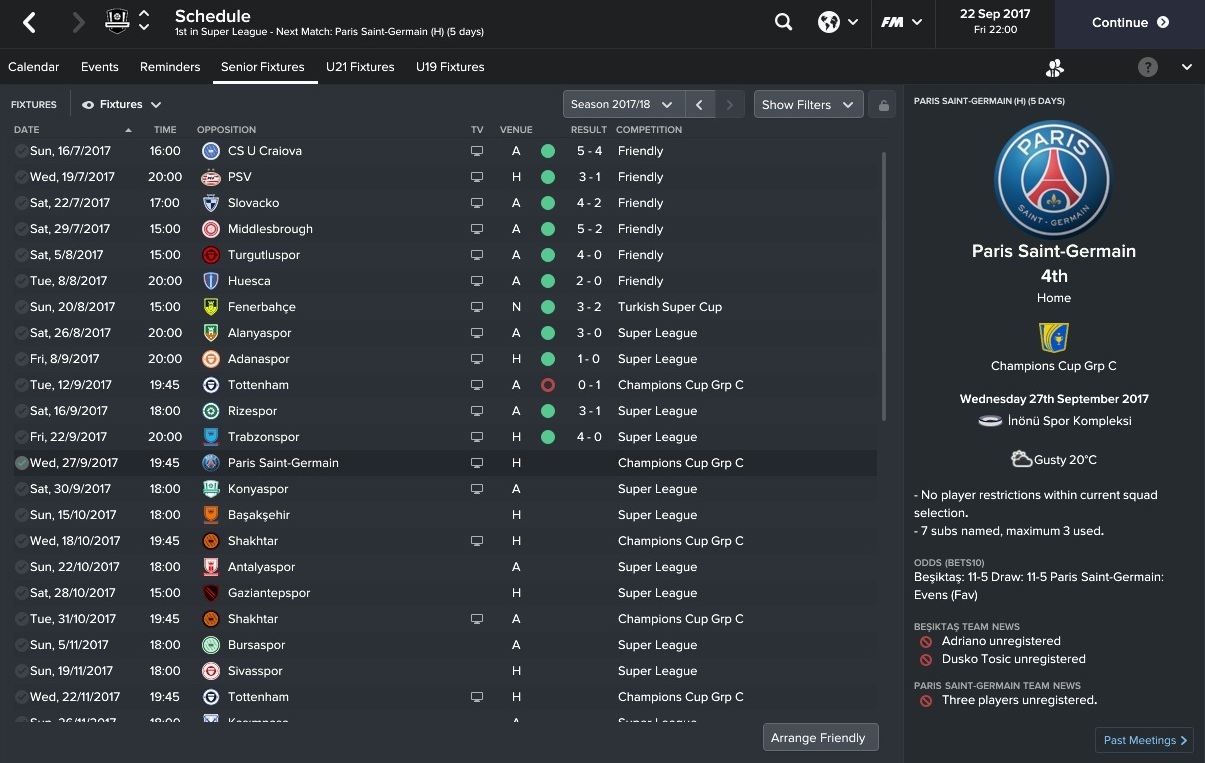 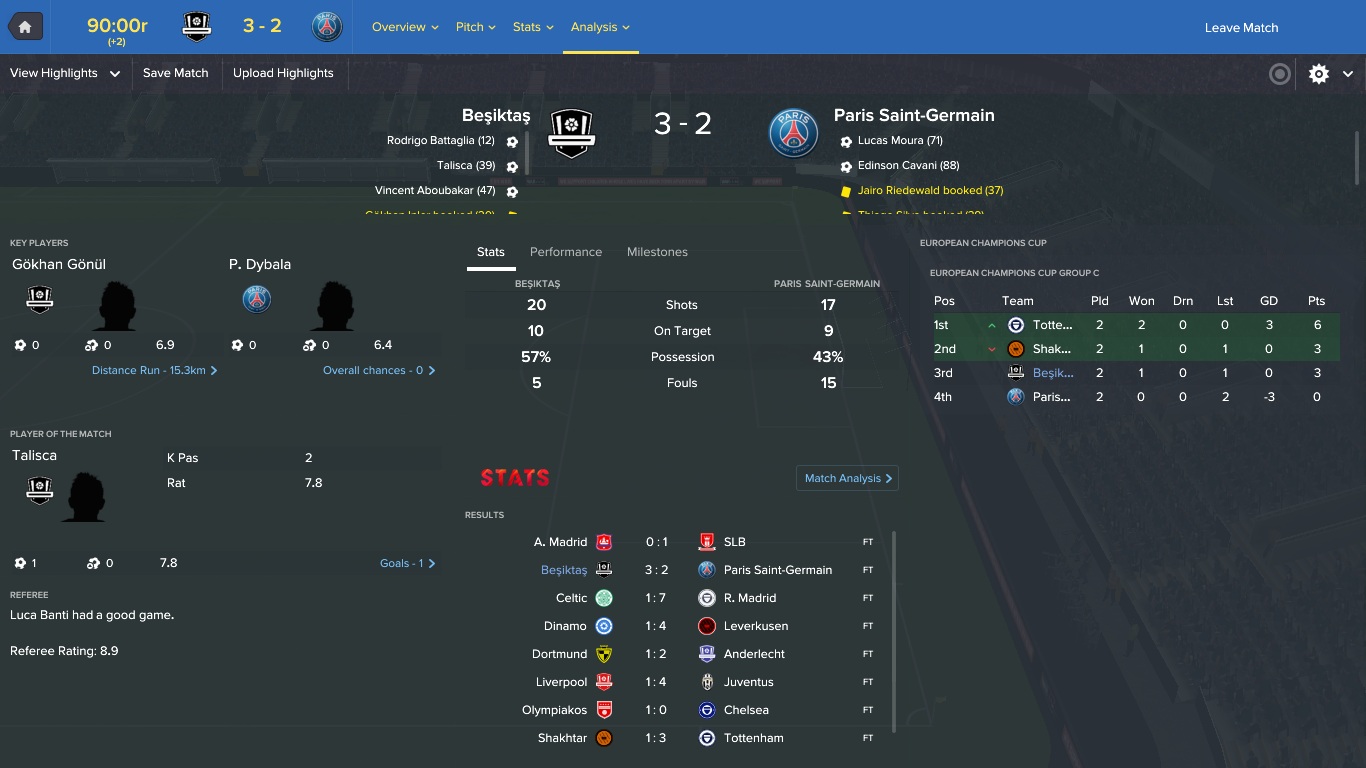 Some of the results, it's a new tactic so team needs some time to get used to it. I also need to change players according to this system with 0 transfer budget, but everything seems good and I have high hopes, while enjoying the games I watch.

Thanks for sparing your time, I hope these will help you or give some insight about how to counter 4-2-3-1 and bigger teams.
See you on the Field